Does everything really need to be sharp? 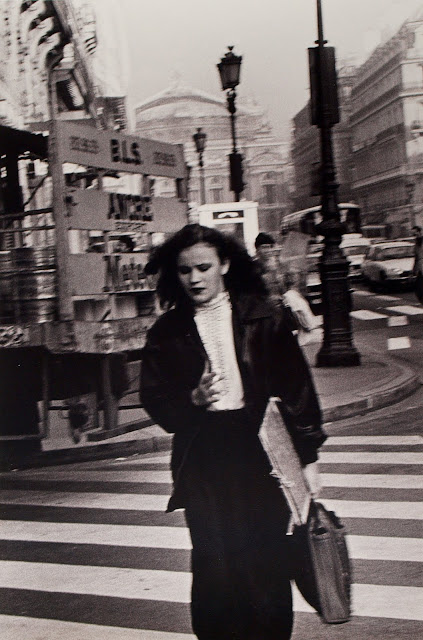 Paris 1978.
I've taken lots of photographs since I did this one in 1978.  And I've used some of the best equipment in the world in the process.  But even though the resulting images are far sharper, much higher resolution and in many instances nearly grainless, this one image remains one of my very favorite.  I was in Paris for the first time as an adult.  I'd bought a Canon QL17 camera just a month or so before I arrived.  I knew next to nothing about photography.  I didn't know how to read and exposure meter and didn't own one.  My friend, Alan Pogue, lent me some Ansel Adams books and told me to shoot Tri-X film.  He suggested that I shoot it all at ASA 200 and that he would show me how to develop it when I returned to Austin.
It was early on a September weekday morning and my girlfriend and I were out walking, headed for Printemps to have breakfast in the rooftop cafe.  I had the little camera in my hand and a very tattered backpack over my shoulder.  I looked ahead and saw this woman coming toward us.  I lifted the camera tried to quickly line up the rangefinder in the viewfinder and I snapped one frame and she hustled past.
It was months later that I developed that roll of Tri-X and weeks after that when I made my first feeble prints.  The negative was underexposed, grainy and out of focus.  I must have tried reprinting it 50 times over the last 32 years.  I finally decided that I liked the image enough to ignore the negative's negatives.  And now I have a print of the image over my desk.
I've never bothered to ask anyone else if they like the image and I'll never be able to separate the amalgam of my feelings that come to the surface when I try to evaluate it's objective value.  But I've come to understand that the day I made a print of this image is the day I decided to become a photographer.
We think of audiences and influences when we create our careers but mine started with a slice of time captured on a loud city street on a brisk autumn morning.
And I've spent the last 32 years looking for more images like this.  Do I care if this image is sharp?
Posted by Kirk Tuck, Photographer/Writer at 23:06

Sharpness is a creative lever that you can pull as you wish - great photography is made that has no intention to be sharp at all. Guess it depends on context. Your fellow Texan Keith Carter is a strong proponent of unsharpness, citing it as just as natural as sharpness.
Best,
Søren Kvistgaard
DK

Absolutely!
I wonder today if Robert Capa put up his D-Day Normandy landing pictures for comment. Imagine the derision.....
Cheers

This is the perfect example of an when the emotional attachment to an image trumps any technical flaws.

This reminds me of Henri Cartier-Bresson's shot of the bicyclist:

While the image itself is not a spectacular tour-de-force, we suspect that there is a back story, an emotional moment on the part of the photographer that we were not there for - which in turn makes the image fascinating.

Amazing the image that sets us on a journey of image-making. it's not always the classic perfect image, that we chase more and more as we age!No reflection on you Kirk! i see so many older photographers becoming "profound" and shooting larger formats..The magic of their early years gone..Hold the magic and the joy! TY.

No, not everything has to be sharp and I think it's a major fault of photography clubs / groups / critics who are overly dogmatic and critical of an image's technical values without taking the milieu and temporal context into account. In this case, the blur conveys the rush of a fleeting moment or the jostling of a crosswalk. If you'd blurred an image of an old couple sitting on a park bench feeding pigeons or smoking contemplatively, well that would be a harder sell. The first question I always ask myself is "Do I like this image", if I do, then I spend more time getting to know the image and why I like it. If not, I'll spend a few to moments thinking about why not and move on.

The image evoked in my mind of you being sent off with your friend Alan's advice craked me up and reminded me as well of the long gaps between the taking and viewing of pictures that used to be integral to the whole experience. Long anticipation and/or unexpected discoveries in the darkroom certainly were part of the magic and intensity of film shooting. By the way i can completely see why you love this image, i have my equivalents. Thanks

The "flaws" in this photo work with the lone, strong subject to evoke a sense of a busy city at work. At least, that's what socked me right between the eyes before I even read the post.

Reading your post brought immediately to mind the contrast between Capa's D-Day landing photos--unsharp because a lab technician "ruined" the negatives by overheating--and his "Loyalist Militiaman at the Moment of His Death." The blurry D-Day images convey the chaos of war, while the Militiaman shot freezes in time the ultimate human moment--the last instant of a man's life, abruptly ended. Sharpness is a means to an end, not the end itself.

I love it.
I work really hard to get maximum sharpness 80% of the time, and I am more selective on others. but Quite often, I have trouble discarding an image that I intended to be in full focus, but messed up, simply because I like it.

Robert, that's the same thing that happens to me. More frequently than I'd like to admit.....

I like this image because it feels real. Reminds me of Robert Doisneau's work.

New to your blog, and also like the image. I still shoot with my QL-17 (purchased new), and had it with me today to a business meeting. I have been shooting with Ilford XP2 (400) for the convenience of C41.

It is nice when you don't need to be concerned with objectivity - and can just enjoy the memory and emotion that the image evokes :)

a Photographer Who Blogs said...

we all have our "babies" and in this case this photo sounds like it is in that category.

The question isn't whether we're allowed to make photos that aren't sharp - we're artists and have the freedom to do what we like. But the question is, does the photo communicate what you want it to, to someone who doesn't have the memory associated with it that the photographer does?

The first photo I took that made me want to be a photographer kind of sucks now that I look at it, but I hold it dear because of my personal experience. I don't expect others to think it's amazing or to understand why I really like it. I don't need anyone's permission to like it myself.

Here is a link from Steve Huff of three photos, using the same "technique" as yours.

All are not-quite-sharp eerie, ominous.