So. When's the last time you shot a wedding?

Been a while for me.  But I couldn't resist shooting one for my friend Heidi.  You might recognize her from the cover shot of the second book,  Minimalist Lighting:  Professional Techniques for Studio Photography.  She was a tremendous help to me in getting the second book done on time and I thought I would return the favor.  And you can't pass up a wedding where the reception is in as fun a place as The Mean Eyed Cat Bar.  There is an obvious Johnny Cash worship in every corner of this awesome Austin music spot..... 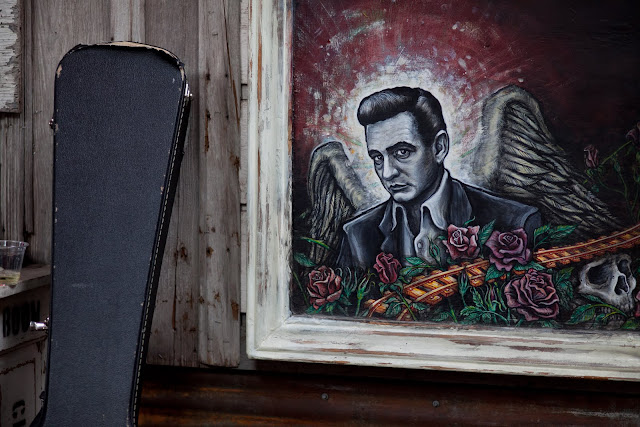 While I haven't shot a wedding in a while I do have a bunch of friends and acquaintances who are wedding photographers and I hear horror stories about brides and moms going nuts and melting down during the preliminary preparations and at the reception.  No such luck here.  No bad behavior, just happy people with nice families and good friends.  So, what do you wear......in your camera bag?

As many of you know I'm juggling two and a half systems but on this day I left the Olympus Pen cameras at home and concentrated on shooting with a Canon 5dmk 2 and an Olympus e30.  Canon lenses included the 20mm, 50 1.8,  100mm f2 and the ubiquitous 24-105 f4 zoom.  It's a poorly behaved zoom on it's own.  Oh it's nice and sharp but it vignettes like a mad bastard and the wide angle distortion is legendary.  All that is forgiven when you whip the files thru DPP (the Canon Raw converter) or the new Lightroom 3.  Press a button in LR3 and it turns into a lens you can be proud of.  The IS works well, too. 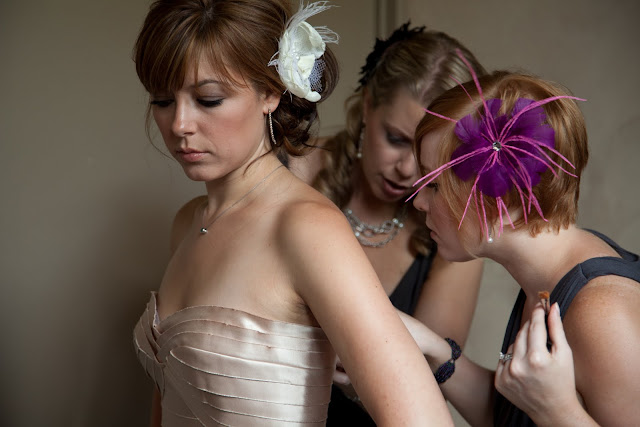 On the other side of the camera bag I had the Olympus e30 paired up with the 35-100mm and the 14-35mm f2 zooms.  And I mixed them indiscriminately.  At normal sizes in good lighting there is very little difference in quality between the two cameras and the wedding would have been a breeze to do with just the Olympus system.  The Canon low light performance is pretty cool.  But I'm sure you've read enough of that elsewhere. 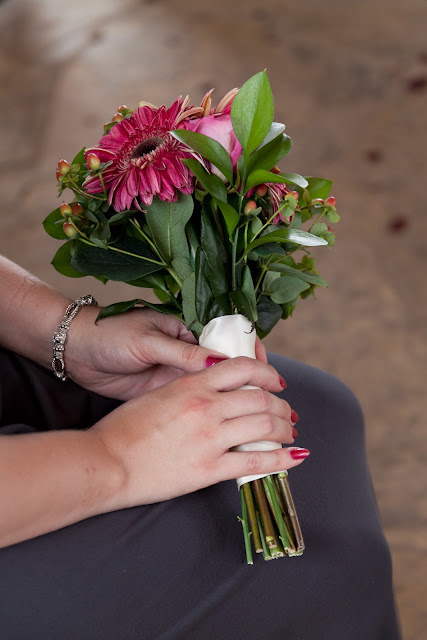 There are two kinds of weddings that I've been part of as a photographer.  One is the big celebrity wedding.  We did several in the past years, with me working as a second shooter to both Jenn Lindbergh and also to Todd Williams.  The wedding we did with Todd was ultra-chic and had a big guest list.  How big?  Well, it filled the Driskill Hotel mezzanine and that's a comfortable space for up to 400.  On that occasion we had three principle photographers (including me) and two full assistants who supplied us batteries, film and memory cards (yes, we shot film and digital interchangeably).  We shot several thousand frames.  We were well paid.  The wedding with Jenn was similar, just as amazingly produced but it required four shooters....... 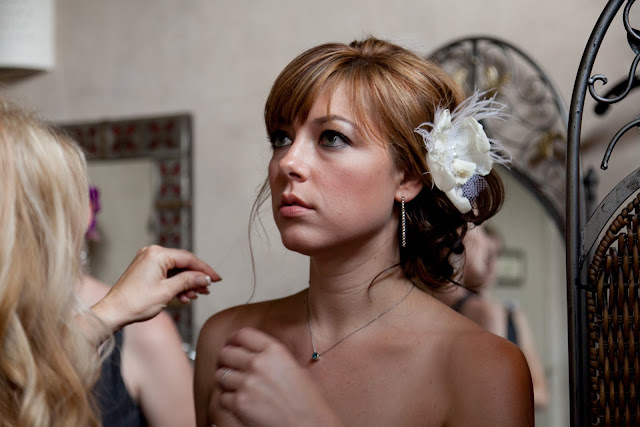 Then there are weddings like Heidi's.  Short on limos but long on calm happiness.  I shoot stuff like this all by myself.  We had tons of time to shoot while the women were getting dressed and tons of time to shoot at the reception. The ceremony was beautiful and short.  The set up shots few and far between.  Nothing was a made rush and there was no overt wedding planner, flogging the wedding party on, keeping the wedding party on a painful, minute by minute schedule.  I like weddings like this.
I brought three flashes but I only used one.  I used it for fifteen or twenty minutes near the end of the reception when the light started to fall and I didn't feel like experimenting with the low light capabilities of a new camera. 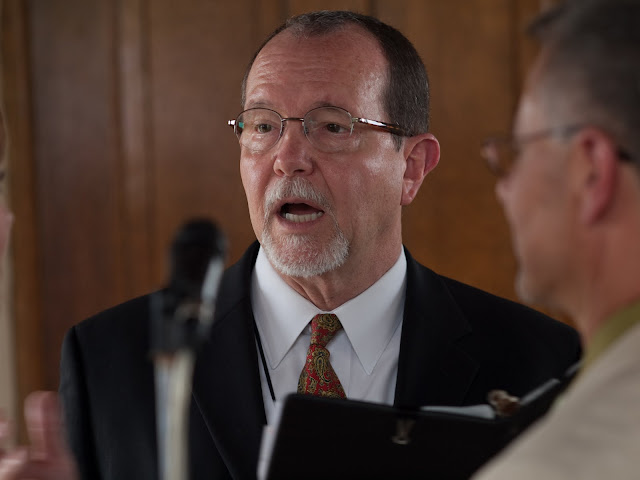 The fun thing about any event where there is an expectation that a camera will be present is that everyone just relaxes, stops playing to the camera and let's me get on with my privileged role of the "invited voyeur".   How often are you invited to go through a casual crowd and pick out interesting faces, photographing them at will, without even having to ask first? 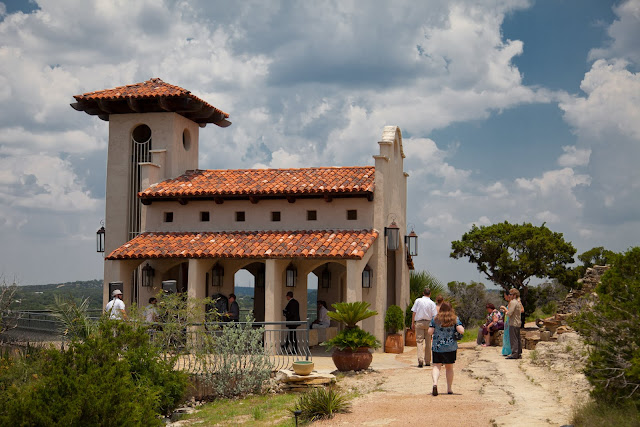 One nice thing about the highlight and shadow recovery tools in the latest revs of all the software packages for image processing is the ability to make Texas clouds look like Texas clouds with the slip of a slider.  All while keeping detail in the shadow areas. 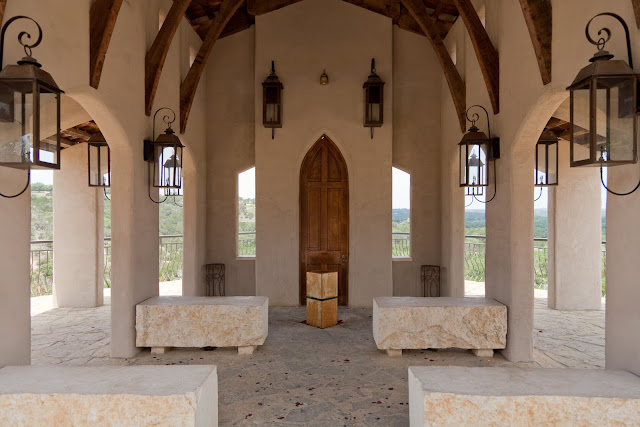 The shot just above is really about the future.  Not metaphorically about married couples or anything sappy like that but the future of lenses and photography.  I shot this with the legendary distortion monster, the Canon 24-105.  The original had very dark corners all the way around and the many pillars bowed like a cowboy's legs.   One click in the new software and everything is......boom.....rectilinear and even.  This means we can start getting lenses that maybe are a little faster or smaller and make up for the design deficiencies in software.  The flip side is that using any of these lenses on a film camera will make the film shooting experience worse and worse.  Ah, progress. 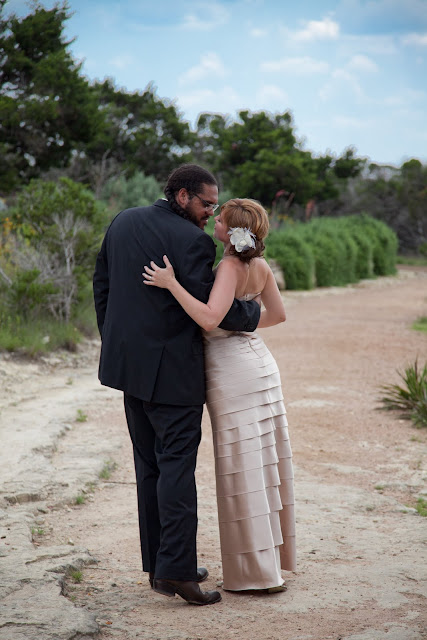 The lens I used most during the wedding was the Olympus 35-100.  I like the way it does stuff.  It's sharp wide open and the bokeh is stunning.  (Confession:  I still don't believe that's a real word but for all of the people who believe like me what I really mean is the out of focus areas had nice smooth structures to them instead of weird, harsh patterns). 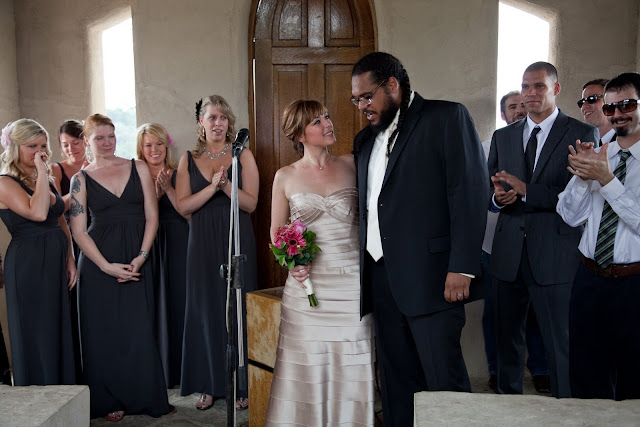 Are you one of those stodgy old wedding photographers who can't imagine grabbing a beer or glass of wine at a wedding you are being paid to cover?  Well, trash me on the web because over the course of the evening I had both.  And a glass of Champagne for the toast.  I also had a great plate of BBQ from the Salt Lick and I pushed a few little old ladies out of the way to get to the cake.  I get the demure, non-intrusive thing but there's a limit to deprivation.  Now that I've said this I'm sure I'll never be invited to shoot a stuffy wedding again.  Hope it works........ 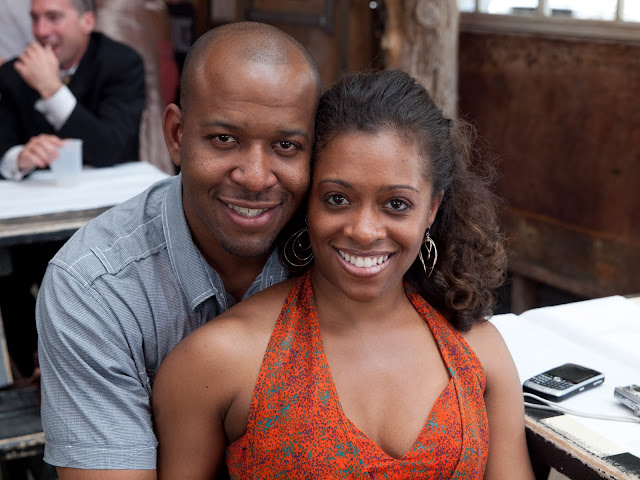 But as any hobbyist or professional will tell you, the only real reason to do weddings is because you get to spend time playing with all of your stuff.  Testing and shooting and framing and all the stuff you need to practice any way.  My only rule of thumb is not to take pix of people stuffing things into their mouths.  Nobody likes those. 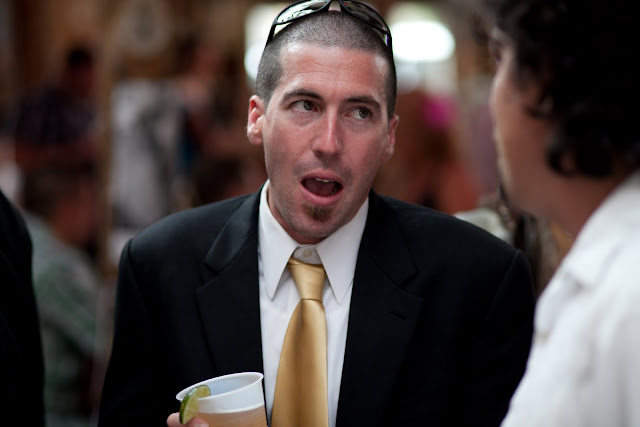 I read a lot on forums about how nervous wedding photographers are supposed to get before the big day.  Ostensibly there's so much to go wrong.  But really not.  As long as you have a lot of back up gear and Google maps to the various locations you'll do fine.  The people who screw up are the ones who over think everything.  They have flash brackets made in a joint venture between NASA and the Ukraine.  Giant Erector Sets of complexity that make mounting or unmounting flash or camera a nasty job.  And they've heard they're supposed to have assistants with flashes on sticks.  It all gets so complex.  When things get that precious it's really time for another glass of wine.  I'll take the Bordeaux, please.
Posted by Kirk Tuck, Photographer/Writer at 18:03

I think a man who gets married in his boots is all right. I did.

"Flash brackets made in a joint venture between NASA and the Ukraine." ROFLMAO!!!

I think you're right about overthinking things, BTW.

I've shot one wedding in my life, pretty much by accident. The sum of my gear: Pentax K10D, Pentax 16-45mm f4 zoom, Pentax flash w/bounce card. The bride was my wife's cousin. My wife took the photos to a family party one night while I was at work. She told me the next day that everyone preferred my shots to the pro's, probably because I wasn't "shooting a wedding." I was just doing what I love, taking photos of family and friends.

Boots are highly good. I've lived in Texas a long time. Some day I'm going to buy a pair....

Is is just me ,or does the fringing above the trees in the vertical shot seems to stand out a bit?

Catering a wedding with the Salt Lick is gold. Yum. I think they are off to a very fine start.

What a lovely refreshing change from how wedding photography is usually portrayed.

Just a quick comment that I really enjoy your recent spate of blog posts - really inspiring and agreeable.

Shooting weddings since the mid 90's has taken me from California to Ireland and it's been great fun and provided me with a good income. Though I'm tapering off my shooting as I'm getting older and want to enjoy weekends with my family I still have a few lined up. Yes, I do enjoy being empowered with the freedom to shoot everybody and everything!

There was a comment earlier about fringe above trees, so I went back to scrutinize. I must admit, I really didn't notice it. There may be two things working here, for or against me. I saw the heart of the subject matter first, or my 50-something year old mind just decides to ignore anything that looks like trifocal blurring and doesn't tell me about it.
-not quite anonymous DD