A mundane post about a boring piece of gear that is a good value... 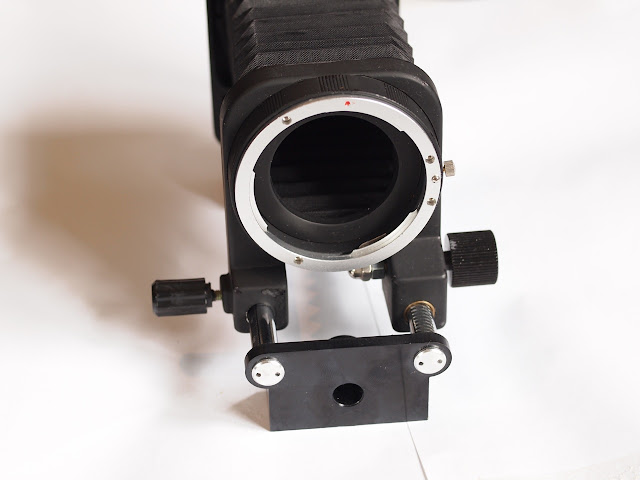 When the economy hit the fan last year I was in the middle of a system purge.  I was convinced that everything would change radically.  I would only go after high end jobs that would leverage my talents as a people photographer.  I would get rid of the gear that wasn't cogent to my mission and this would make me more streamlined and help me with positioning.  Right.  So I sold off my Nikon gear and part of that excavation included my old PB-4 bellows rig for shooting close up.  For nearly a year I felt well vindicated by the whole purge.

But somewhere along the line......say about two weeks ago....the phone started to ring again and the mysteries of telecommunications played midwife at the re-union of me and my former largest client.  Could I, they asked, still do wafer and die shots?  Would I be able to do some this month?  Well, yes, all the brain cells that deal with that set of tasks were still firing well.  The problem was I had two systems to work with and had a bellows for neither.  Why a bellows?  To do this work correctly you need to be able to get to 3 to 5 times lifesize.  Can't do it with a macro lens alone.

I started to explore options and I came across a solution that made me skeptical.  On Amazon.com Fotodiox (company) was offering simple bellow units

for just about every camera on the current market for the princely sum of $49.  Yep.  $49.  How could you go wrong.

Short answer?  You can't.  I ordered on and waited to see what would happen.  It came in a non-descript box and had the right Canon adapters on both ends.  I fitted a valiant and trusted 50mm Micro Nikkor, with traditional aperture ring, onto a Fotodiox Nikon to Canon camera mount adapter ring and got going.  Bottom line.  Pretty solid.  It lock down tight.  Made with a good bit of plastic.  Not much else to tell.  After the shoot I looked at files at 100% and couldn't find any deviation from parallel in any plane.  That's the crucial deal.

Is it anything like the ultra-smooth and ultra sturdy Nikon?  No.  But for the five or ten times a year I need the extra extension it is very worthwhile and workman-like.  A damn cheap way to get your feet wet on some REAL macro stuff.  You could also buy a reversing ring and use a conventional 50mm lens with pretty good results.  Well done for the money.

Here are a few more views: 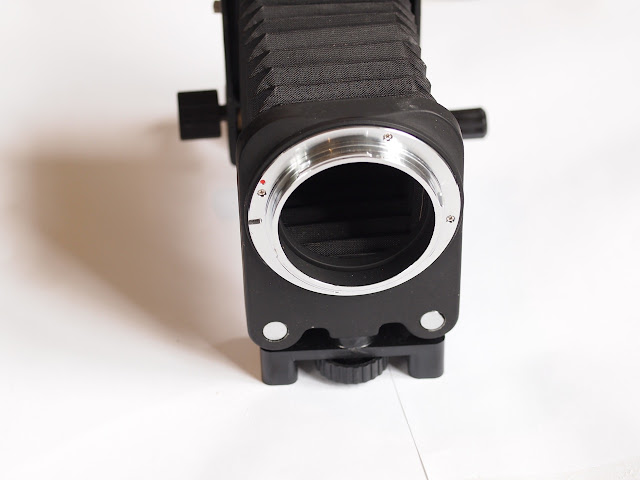 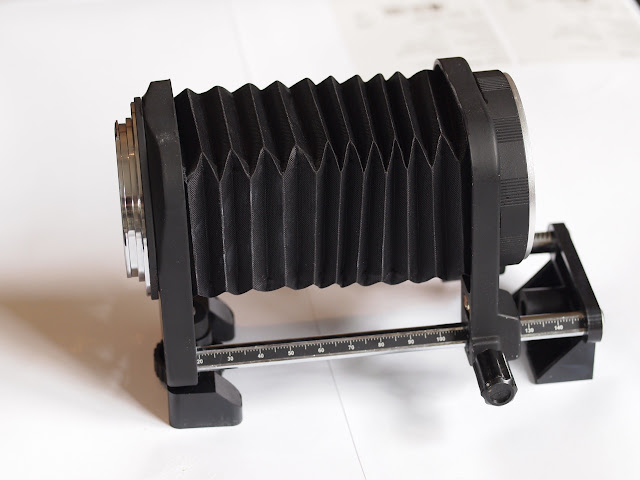 Sleak?  Naw.  Just hard plastic, a bellows and a couple of attaching mounts.  Works well on a 5D mk2.

Posted by Kirk, Photographer/Writer at 19:01 9 comments: