If it's Saturday it must be Swimming Day! And other errata.... 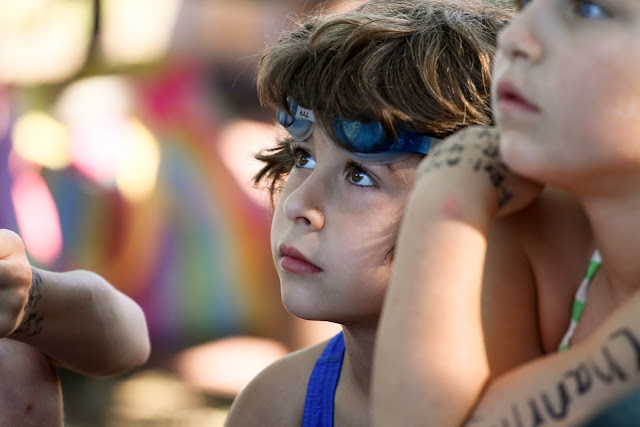 Now that is some bokeh!
If it's Summer in Austin you can usually find us at the pool.  I'm there in the mornings for our daily masters workout.  Guess who was on the deck coaching our team early this past Thurs. morning?  If you said the world's 100 butterfly record holder, Ian Crocker, you would be correct.  That's got to be a bit intimidating at 7 am......  Ben hits the pool for his daily workout with the Rollingwood Waves at 11:30 am on the weekdays.  On Friday nights or Saturday mornings we're usually at the pool for the mighty Rollingwood Waves kid's swim meets.

This may come as a surprise to you but I am also the official kid's swim team documentary photographer.  We all have to have a volunteer positions and that's mine.  I shoot whatever I want, all season long and then I do a big slide show at the end of the season.  People seem to like it.  Maybe they're just being nice. 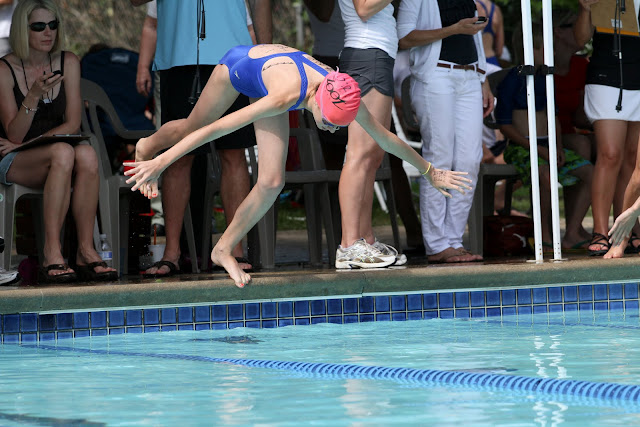 I like to catch the kids mid dive.  When I shot the old Kodak DCS 760 (noble beast of a camera....) I had one opportunity for each kid.  With the faster cameras come more chances.  Today I was playing around with a Canon 7D and the 70-200 f4 L lens (the plain jane version, not the IS one....) and I was able to get three or even four variations of each dive.  The camera can shoot Jpegs, nonstop, at around 8 FPS. 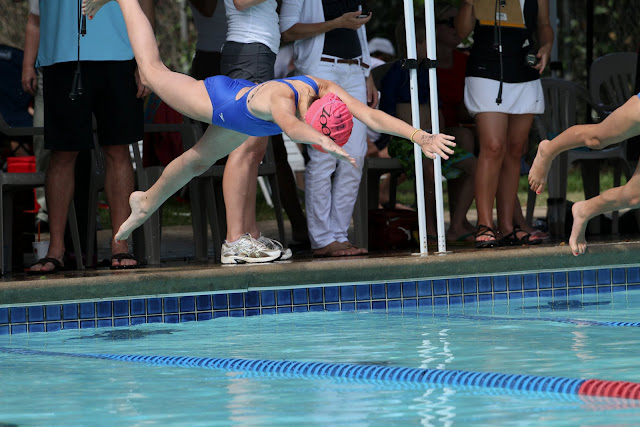 I've got a few things to learn about Canon's brand new focusing system but it seems pretty straightforward.  Mostly you just hold your finger down on the button when you see stuff you like. 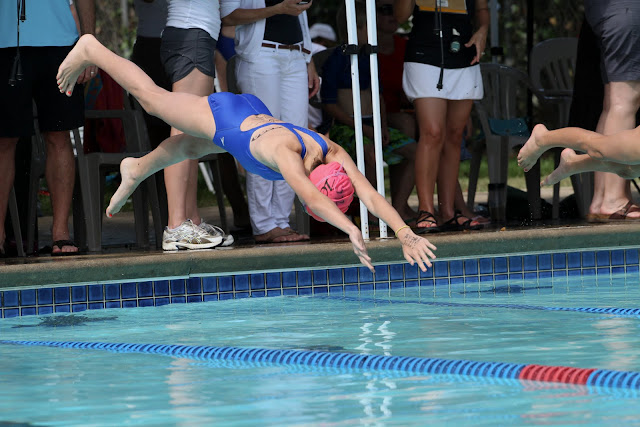 And then the camera pretty much does everything else for you.  I wish there was a switch on the camera to move shouting parents out of the way when they walk in front of my camera.  That will be on a later body.  Or perhaps it's a Nikon feature. 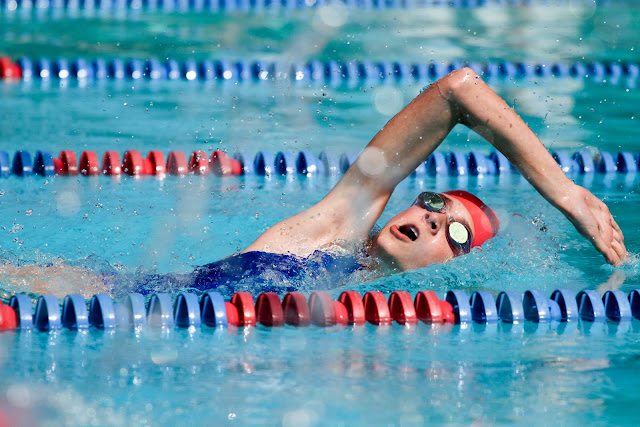 For those of you who are unfamiliar with the Canon 7D I'll tell you what I like about it in one short sentence:  The got the sound and feel of the shutter just right.  More?  The finder is beautiful.  But what I really like is the 70-200mm lens.  I'm guessing I should have immediately bought the new and improved 70-200mm f2.8 version 2 with IS but I was tired of spending multiple thousands of dollars on lenses when ALL of the reviewers told me that the $600 f4 is sharper.  I'm sure someone can dispute that but I'm giving up trying to keep up with the pecking order and the minutiae of lens lust.  Here's my one sentence review of the f4 version:  It was light enough to carry around all day in the heat and when I looked at my handheld, wide open shots they seemed really nice for a lens that's only $600. 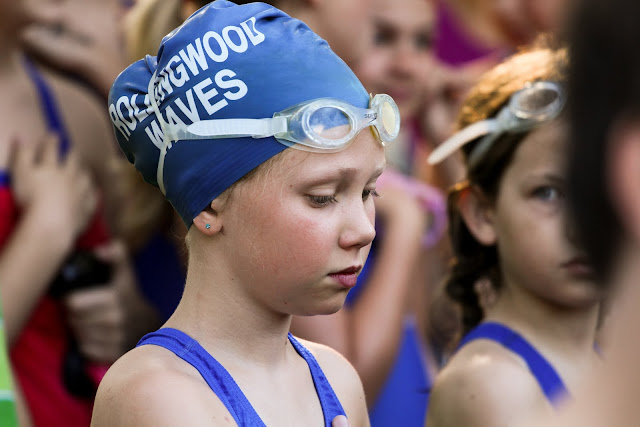 We always start the swim meets with a cheer and then the national anthem.
I'd like to talk for a second about how I do my photography at the swim meets.  I generally use one body and one lens at a time.  I keep a second lens in a very small bag that hangs over my shoulder.  I don't bring any flashes, stands, tripods, meters, filters, cable releases, cellphones, monopods, or Hoodman loupes with me.  I know most of the parents because I've been on the board at the pool for ten years.  They know I'm supposed to be there taking photographs, which is very nice.  I know a lot of the kids because my son has been swimming in the program for ten years.  I take candid shots when I can and when I can't I smile and ask people to squeeze together a little closer.  Sometimes the kids have shots in mind that they want to do.  I always do the shots their way and include them in the web gallery we put up.  I tend not to photograph the parents, other than the coaches, because they are hot, sticky and wearing very casual stuff.  Believe me, they don't want to be included.
I've been spoiled by shooting the two Olympus f2 SHG lenses, the 35-100 and the 14-35 so now I can only enjoy lenses that are good enough to be shot wide open or nearly wide open.  The Canon lens I mentioned above qualifies.  (Side issue:  If you are lucky enough to have a good "bricks and mortar" camera store nearby you should buy your stuff there and foster a good working relationship with a professional sales person.  Here's why:  when I wanted to dip my toe into some Canon stuff the 70-200 was a must have.  But I already have a three and a half pound monster so I was having difficulty trying to decide what to end up with.  I've also heard that QC in all optics can be variable, item by item.  My solution would be to head to the camera store on a Saturday afternoon and borrow all four models of lenses and then spend the evening shooting them.  When I narrow it down I then reserve the right to test the variations of the model I decided upon before buying it.  Once I held the faster lenses for twenty or thirty minutes my mind was made up.  Much tougher and more expensive to do this kind of "real world" evaluation with mail order.  Unfair to play locally and buy long distance.  If you have some weird rational for spending hours at the local store playing and then buy long distance to save a few dollars I don't want to hear about it. 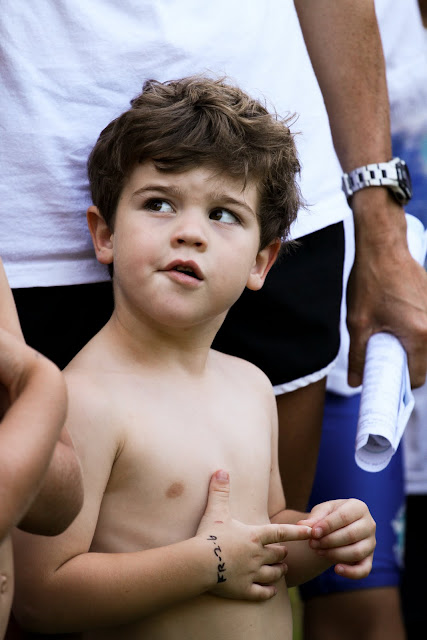 Ready to get the show on the road.
All the images get color corrected just like we'd do for any other client.  We then load between 500 and 800 images from the swim meet up in a gallery on Smugmug.  The images are sized to 1800 pixels wide and saved at 85% jpegs from Lightroom 2.7.  We don't retouch kids.  The galleries are available to the families to look thru.  Sometimes the kids will be over at the house the day after the meet and they bring up the latest gallery, grab some snacks, then put them up on a 27 inch monitor and run the slide show.  Good for some laughs for the teenaged people.  We used to enable the print order function in Smugmug and price the prints at a fairly reasonable amount but most parents just want a digital file. We've set up the Smugmug fulfillment system to sell them files for personal display for a nominal amount.  As a board member it would have been a big conflict of interest for me to make money at pool but I didn't want to train our audience to expect free stuff so we donate the proceeds to the school district foundation.  Parents feel good about it, I feel good about it and the school really likes it.  They all have my permission to make prints for personal use.
There are a bunch of reasons I like to do this kind of stuff.  First, it keeps my technique fresh.  Second, I love some of the images because the kids are so expressive.  Third, it gives me an excuse to buy faster or just different cameras.  Fourth,  it helps me get acclimated to the Summer heat in a way that's directly connected to what I really do for a living.  Finally,  it's a clever dodge that keeps me from having to volunteer for a really tough job.  Like corralling six year olds.
I wish I could do stuff like this all the time. It's fun.  It's outdoors.  I obviously love the sport of swimming.  But I did "real" work this week as well.  Yesterday I spent some quality time photographing semiconductor products using the cheapo bellows I talked about earlier in the week.  Also did some portraits of doctors.  Met a new photojournalist in town who I think will turn into a very hot shooter.  I did what any jealous, weary professional would do in the face of strong, young competition:  I took him out for nice lunch, got to know him and gave him a hearty welcome to Austin.  There's not just one pie and it's not a zero sum game.  Meeting other artists should be a fringe benefit of the business.
Sure is fun being a photographer.  Now where did I put that bottle of Gatorade???

Marketing note:  If you've even thought vaguely, in passing, mildly, or lackadaisically about checking out my fourth book, the one on lighting equipment, would you be willing to go to Amazon.com and look at the reviews we've been getting?  It's my favorite book and I think it deserves a wider audience.  Won't take but a minute or two.....  Just in case, here's the link:

Posted by Kirk, Photographer/Writer at 16:11 9 comments: