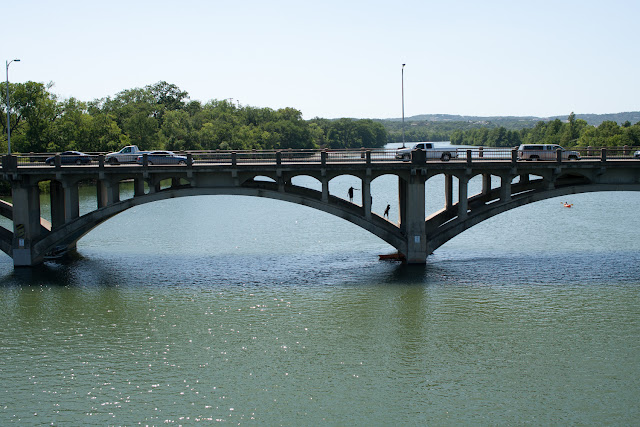 Sadly, for a photo oriented blog, this is a pretty damn mediocre photograph.  But it reminds me that while people are working in offices all over the place a large number of young adults are off playing in the middle of the day.  This is the Lamar Bridge.  It spans Lady Bird Lake in the center of Austin.  Today I watched as dozens of trim, athletic adults paddled to the bridge on standing paddle boards, climbed the spans and jumped into the slow moving water.  It reminded me that we were all enjoying active participation even though it was 3:00 pm on a toasty (near record) Summer afternoon.  Today's camera:  a Canon 1dmk2n with a Zeiss 35mm f2 ZE.  This is what I get for shooting into the light.....


Let's not be affected and call this a "photowalk".  Instead let's just say I went out for a walk and I took along a camera.... 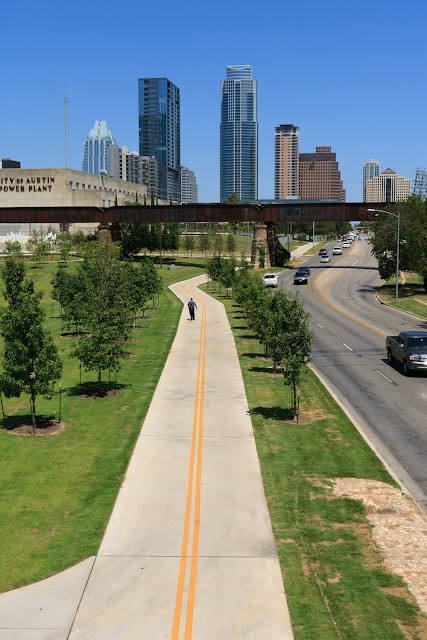 This is the view from the new pedestrian bridge addition.  The ped bridge spans the lake and provides lot of "no car" access to the 12 miles of pristine running trails that border the lake in the center of our town.  The road for cars is on the right.  The road for bikes and walkers is on the left.  This is an additional bike way.  The running trail it actually next to the water, just to the right of the car road.
It really was a blue sky day. 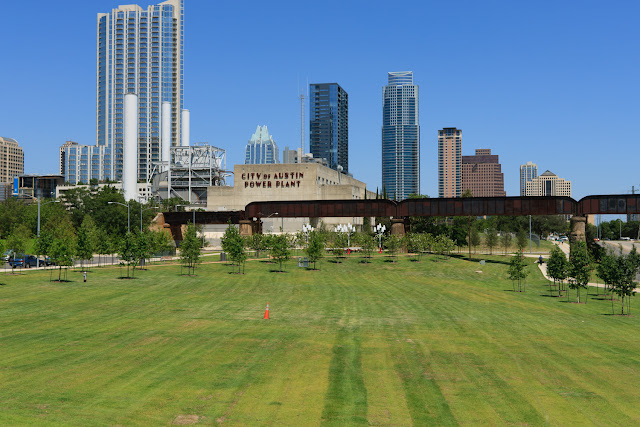 We may be in the middle of a severe drought but you wouldn't know it by looking at the premier city parks.  It's emerald as far as the eye can see.  The power plant has been closed for years.  Now it's used for trendy/cool parties and as a set for dozens of movies. 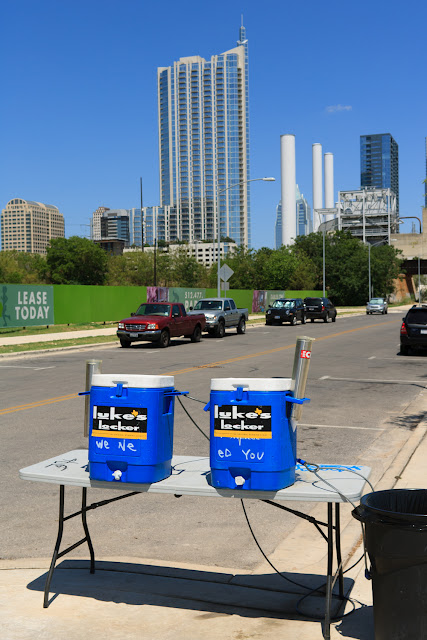 These are water coolers.  They are two of dozens and dozens that Luke's Locker and Runtex (running stores) put up around the lake to augment the old, warm, permanent fountains.  I like it when businesses in our city do extra stuff for their clients. For free.  Without a subsidy or tax abatement.  And check it out,  no one steals the paper cups and no one throws the paper cups on the ground.  Little stuff makes a city more fun.  When it gets super hot (over 105) there are still a lot of runners (dozens?) who brave the mid-afternoon heat.  Sometimes Runtex sends people out on big three wheeled bigs with coolers of water attached.  The ride up to the huffing-puffing runners and ask them,  "Are you staying hydrated?  Need some cold water?"   It's like having a lifeguard on the running trail.  I forget there are obese people when I'm hitting the trail.  Out of sight out of mind. 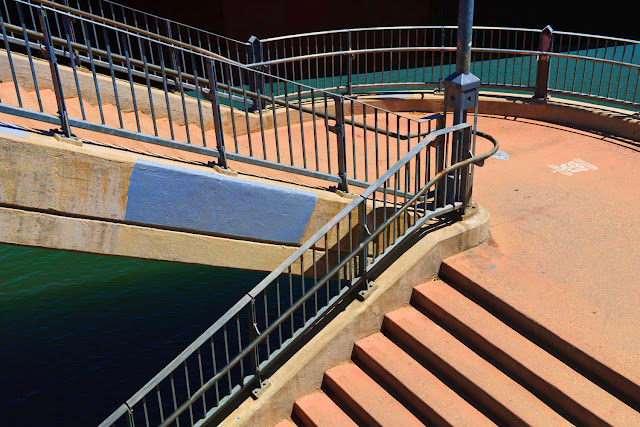 I love the Pfluger Bridge.  It's the pedestrian bridge I keep talking about.  And since it's a wide open space with no cars on top it's become more of a hanging out, sightseeing, balcony to the downtown skyline in both directions.  I use it as a portrait location.  I run across it.  I park south and head north of the lake to get to Whole Foods.  Sometimes, when the light is cool and fading quick in the winter, and the sky starts turning purple and orange I just stand on the bridge and watch the day fade.  And it's beautiful and doesn't cost anything for the show. 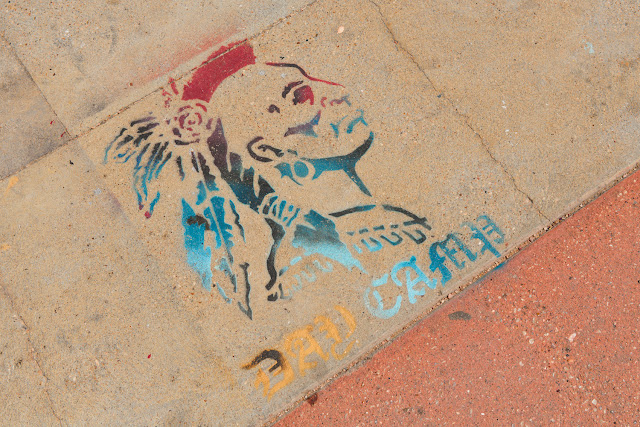 I love the fact that all over central Austin there is spontaneous street art.  Chalk drawings.  Stencils.  Political statements and free form sculpture.  A culture that takes time to do art is robust and doing well. If you don't like it don't sweat it.  It's all ephemeral.  It wears off quick.  If it's not nice it'll get cleaned off  with dispatch. 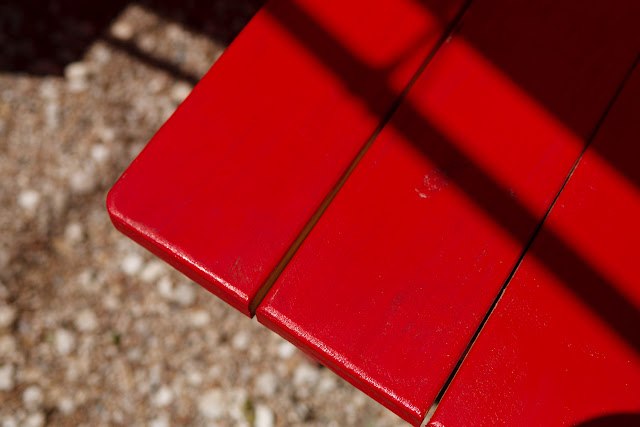 I love the fact that we have so many outdoor venues.  And that people don't carve their initials into the picnic tables to often.  And that they are mostly painted bright and cheery colors.  This is at Flip Happy Crepes.  They have blue tables at P. Terry's Hamburgers.  I love businesses that aren't afraid of bright colors and bold statements. 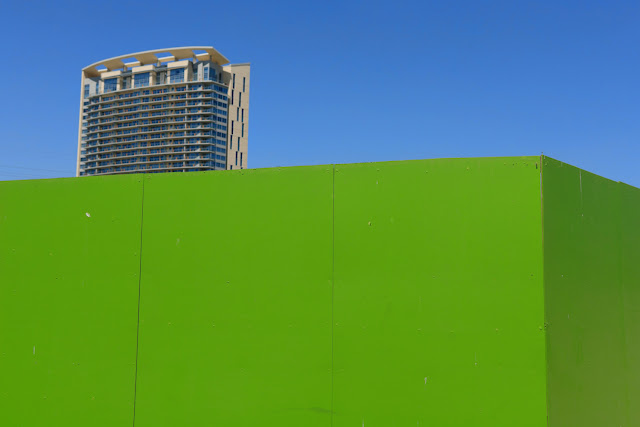 I hate to say it but I really like the tall buildings that keep springing up all over the downtown area.  It may not make a big dent but ever residence building that goes up means less traffic on the roads outside of downtown, less suburban sprawl and more concentrated night life and restaurant choices.  Now it's fun to go downtown and hang out.  Twenty years ago there was, like, one coffee shop and the streets were deserted after 5pm.  Now it feels like a big city. 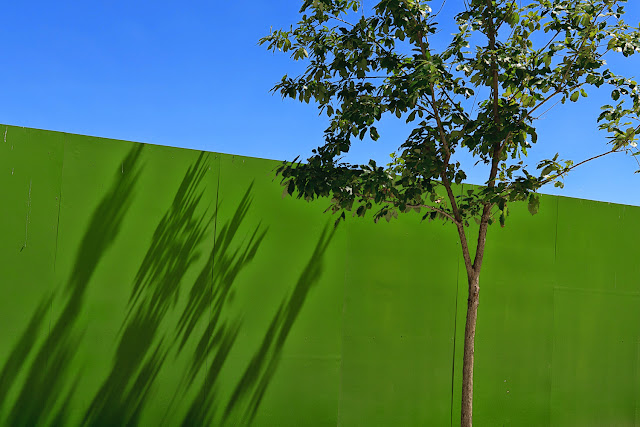 And every open space seems to get more and more trees.  Don't care which side of the political spectrum you're on, no one hates trees......I hope. 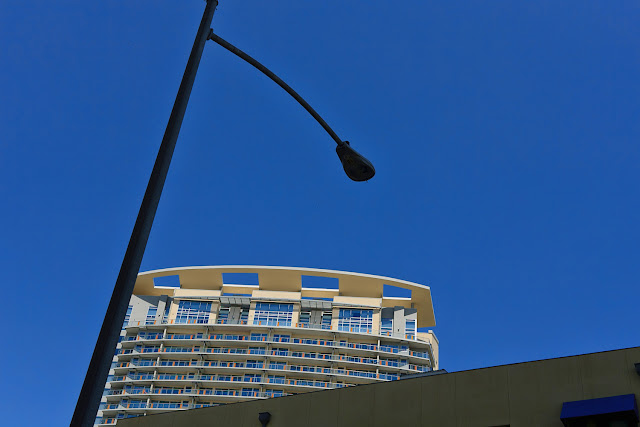 So, what was I doing downtown?  Well, I worked all last week and all the way thru the weekend. I finished up video projects, I shot in San Antonio for two days.  I did a big slide show for the kid's swim team. And I didn't spend any time shooting just for myself.  In the same way runners and swimmers crave a workout when they've missed a few I missed just walking around with my camera looking at stuff.  I also wanted to get to REI and buy some "technical" shirts for Ben and Belinda.  You know the ones I'm talking about?  They use a special thin fabric that breathes and wicks off moisture and they have a built in SPF of 40 or so.  They keep you feeling about ten degrees cooler than a cotton t-shirt and they keep the UV off your skin better.  I found a bunch on sale at the downtown REI store.  Score.
And who could miss a quick walk over to Whole Foods for one of those chocolate, coconut and toasted almond bars, washed down with some fresh Sumatran coffee?
Add in a little walk thru downtown and you've got your own event.
Posted by Kirk Tuck, Photographer/Writer at 18:40

Are you sure these didn't come from an Olympus E-Pl1? Nice shots. Never been to Austin but I hope to some day.

All new today. I shot the same subjects a lot. Kinda makes me think the cameras don't matter....

I wanted to move to the US but my choice was San Francisco. After this I might change it to Austin. :)

You failed to mention that along with the sunblock one should always carry a snakebite kit just in case. With the average Austinite suffering 1.33 poisonous snake bites a year they sure come in handy. (wink)

Michael, thanks for catching that. We might as well fess up about the killer allergies. Every year hundreds of new transplants to Austin end up sneezing to death from the allergies. Please visit and spend money. But stay at your own risk....