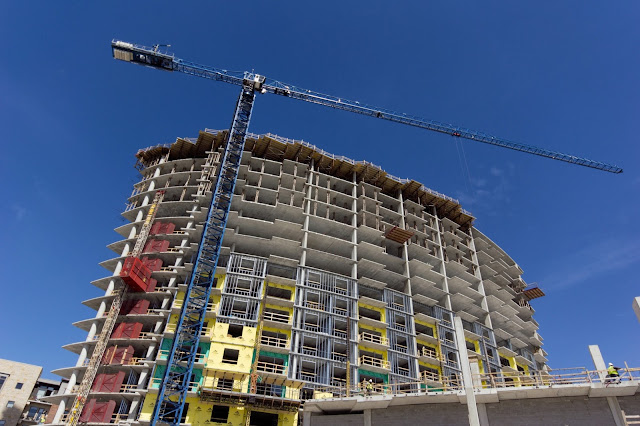 This is one of those goofy photos you take when you want to check in on the performance of a new lens or camera. It's not going in the portfolio. Why did I take it? Because I wanted to see how a particular lens worked on a new-ish camera and with new lens profiles supplied with the upgrade to Lightroom 4.4.

I'll back up. I bought a Sigma 10 to 20mm f4.5-5.6 lens last year to use on an assignment photographing a new Whole Foods store. My primary camera at the time was a Sony a77 and while the 16-50mm lens was great for most stuff I wanted something with a bit wider angle of view. I researched the possible options and flipped a coin. The Sigma won. While the 16-50mm 2.8 DT lens was fully corrected for vignetting and geometric distortion by in camera profiles none were available either in the camera or in LR for the lens at that time. On the shots I took with the lens I added time to my post production routine to mess around with the edges and corners in DXO software. The results were fine for the project at hand. Not quite as good a performance as the 16-50mm but certainly very acceptable.

I was working in the latest ish of Lightroom a few days ago when I started looking to see if there were any new profiles for lenses I owned. I found profiles for the two Sigma/Nex lenses I recently bought, the 19mm and the 30mm. I kept looking and also found a profile for the Sigma 10-20mm.
I like the two primes and I was curious to see if the Sigma 10-20mm, when combined with the amazing sensor in the Nex-7 and supplemented with the correction in LR, would have much improved imaging characteristics over the uncorrected performance last summer on the a77 DSLT, fixed mirror camera.

This building, under construction, provided a nice range of lines and textures. I thought it would be a good test. I used the lens with an LA-EA1 adapter, which has no mirror, only contacts for electronic information and primitive AF. I decided to use manual focus and focus peaking instead. 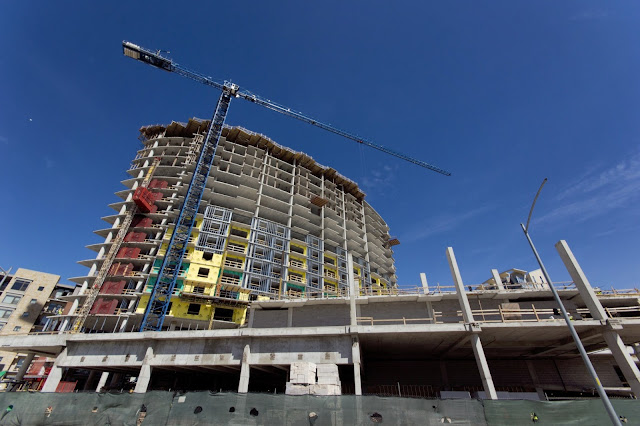 The Nex-7 has a very  high performance sensor with high sharpness. I'm very, very happy with the performance of the combined camera hardware and Lightroom corrections for this lens. 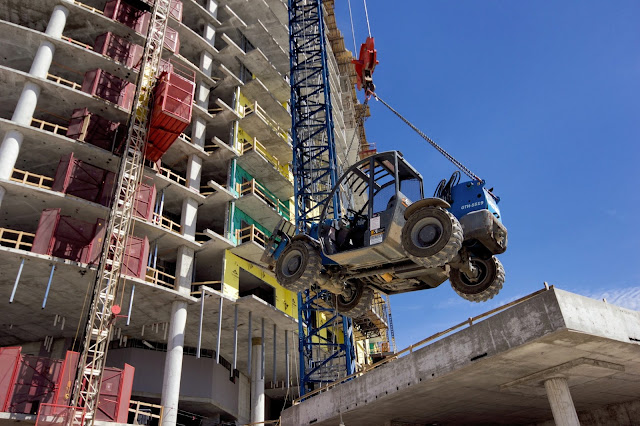 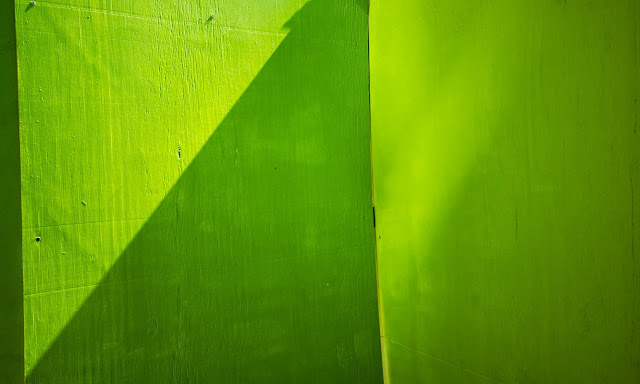 The image just above is of painted plywood barriers that surround the construction project. I thought it was a nice test of the lens's ability to render texture and a pleasing rendering of the saturated green paint. 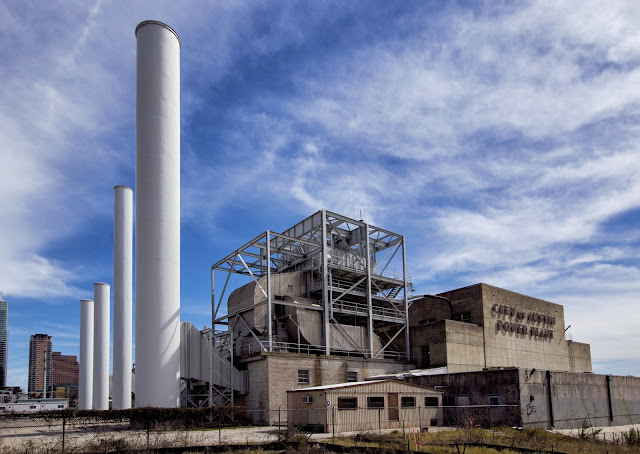 As usual, performance parameters of modern cameras and lenses are moving targets which are influenced and changed by the influence of software driven corrections. It pays to check in frequently to see if some part of your imaging system has been improved and may provide increased performance metrics without having to upgrade.

Having done this test I'll be less reticent to use the combination for architectural projects in the future. Have I mentioned just how much I like the Sony Nex 7?

Posted by Kirk, Photographer/Writer at 19:13 15 comments: 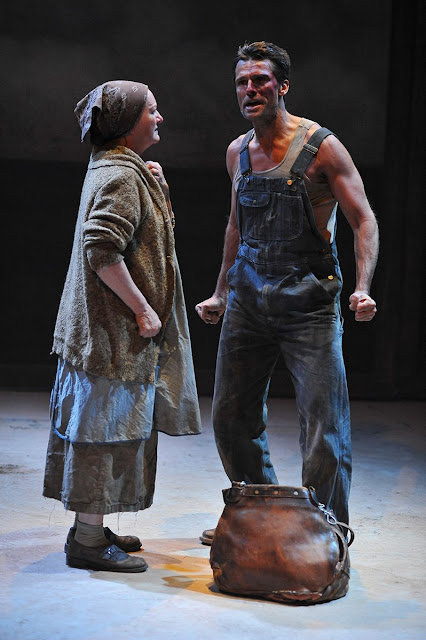 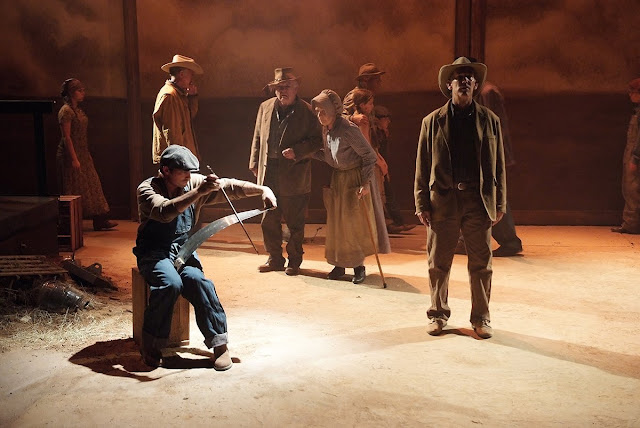 Images from Grapes of Wrath

I was having lunch with two creative directors yesterday. We were eating tacos at one of my favorite new (to me) restaurants, Garrido's. At some point we started talking about lost skill sets and the march of progress. There seems to be a thread of thought these days that goes something like this: "People will always chose a lesser product or service if it's easier to use and cheaper."

It's no big news when people who've been in a business for a generation or two start to bemoan the current state of the industry and then compare it to how things were in the good old days. But one of us postulated that, the process drives the creativity.  It's also true when stated the other way around. Creativity can drive the process. What we mostly agreed upon was the idea that making a process quicker and easier generally lessens the amount of thought and effort, trial and error, and experimentation that goes into it. Being able to separate the creation of photograph from the compulsion to "fix" what has already been created, through the use of filters and post processing also diminishes the authenticity of the process.

I'm not sure it's the new tools or the easy laziness of software dependence that's to blame for all the boring photography I see all over the place as much as I think it's a result of a society that's lost the ability to really concentrate and be in the moment when they are working. Even when we are working on our own creative projects. There are so many distractions. The ubiquity of the cellphone creates an anticipatory existence wherein we are constantly poised and on alert for the next text or phone call. The brain becomes bifurcated and thought diluted.

While everyone under thirty (forty?) will rush to demagogue this statement I really believe that at the point in our collective history when we allowed ourselves to be 100% available to everyone else we lost our ability to be 100% available to our own selves and our own processes. When we acquiesced to the concept of being "on call" we lost our ability to be really "mindful" about anything in our lives.

It's not digital cameras or online sharing that's causing our pleasure in seeing images to evaporate it's just our sudden (one decade) inability to concentrate fully on either the creation or the enjoyment anymore. It's the same mindset as sitting in a theater watching a movie and compulsively texting to find out what everyone else is doing now and what they will be doing in the immediate future. Our collective fear of being left out is draining our resources to opt fully in.

It's like trying to make love while checking for messages. It's a compulsion. It's also an epidemic.

I wonder if we, as photographers, can come back to a place of real mindfulness when taking images.

Everything we seem to create mitigates against it. I walked with several photographers last month. What a mistake. One kept getting calls from his spouse...which he answered. Another kept showing us "interesting" new apps on his phone. But the whole idea of a group walk with the idea of taking images is about as silly as it gets....if your goal is to make photographs for the sake of your own art. It's like creating the ultimate distraction and then making it portable.

Wouldn't it be an interesting exercise, on many levels, to set aside a day in which you pursue a really focused and mindful day just for taking images for yourself? Wouldn't it be cool to schedule a day that went from sun up to sun down (or later) in which you took only one camera and one lens. A day on which you threw away all the excuses and left your phone at home, in a drawer? A day where photography didn't revolve around the discover of chic new restaurants but actually revolved around your own undiluted looking and critical observation. A day when you thought about every single time you pushed the shutter button and made a photograph?  A day when no one came along for the ride?

I understand that for some people photography is an excuse to socialize and that's fine. But the people who roll that way probably aren't the same ones who read my stuff here. You don't have to be serious all the time. But it might be nice to make a date with yourself to be unencumbered at least some of the time.

Paying attention. Focused on one thing. Reducing distraction. Being totally there for your own life.

(Can you imagine an actor stopping between lines, in the middle of a performance, to check their phone?)

Posted by Kirk, Photographer/Writer at 17:18 20 comments: