When cameras go all Frankenstein. 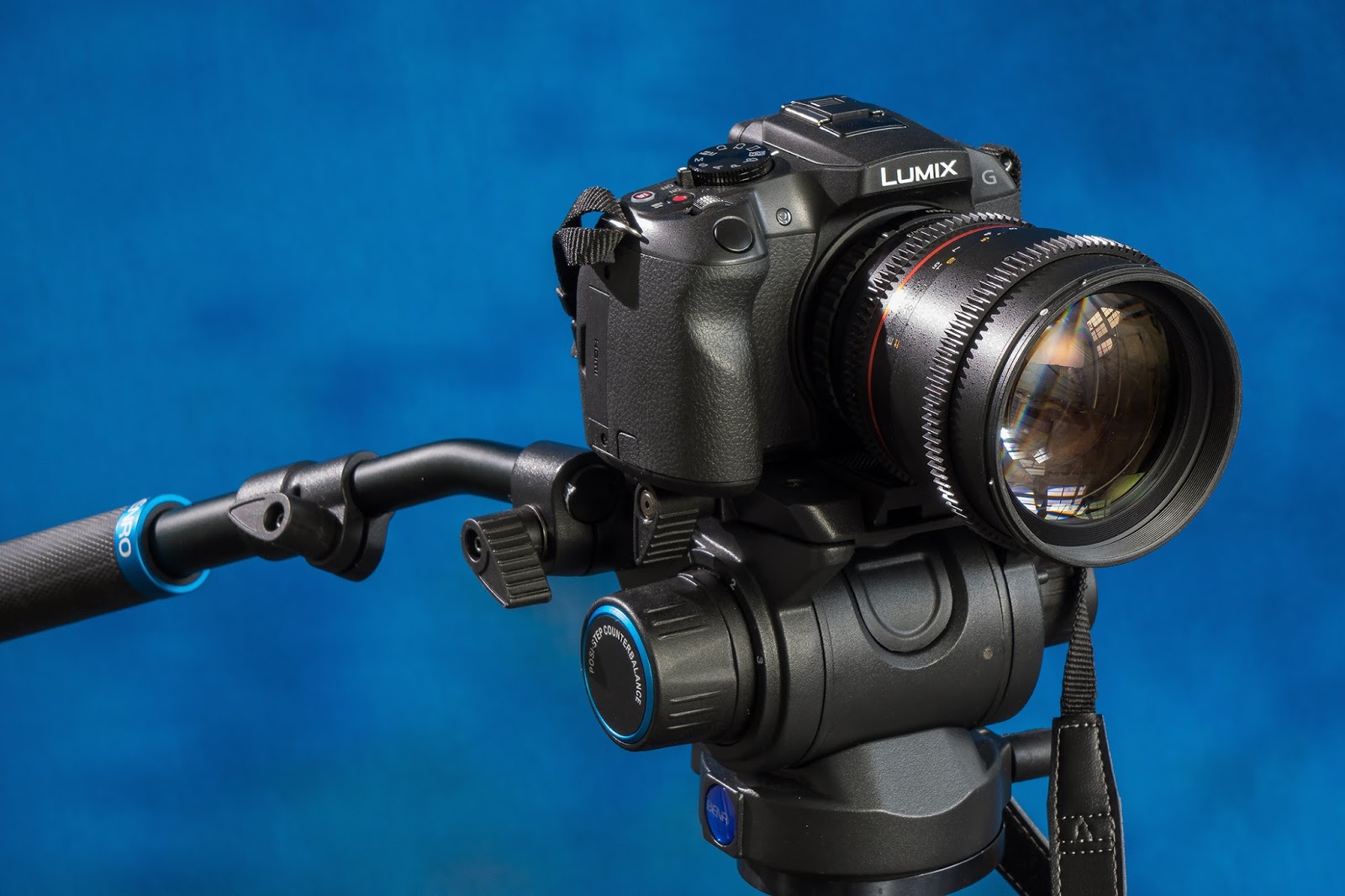 Setting up a Panasonic G6 as a "b-roll" camera for an interview.

I love the way those wacky guys in the video industry trick out their cameras. They put 'em on rails, have follow focus knobs hanging off the sides, put them in cages with all kinds of cables attached and make lens hoods into dramatic, architectural structures. Then they put the whole mess on top of fluid heads that look as serious as the cameras. How many knobs per square inch (kpsi) does it take to make sure a camera is ready to roll a few minutes of interview? I'd say plenty.

Above is my basic starting point for a Frankenstein camera. I'm sure the product manager for this consumer item presumed that the main use of a $600 digital camera would be handheld recording of kids blowing out candles and first bike rides. And studies have shown that 94.067% of all owners of digital interchangeable cameras use only the kit lens that came with the unit. Kind of makes all those arguments about the safety and long term security of composite lens mounts meaningless.

I figure that cameras with interchangeable lens mounts were intended to be used with multiple lenses. If the photo gods had wanted us to work with only one lens they would either have made all cameras like the Sony RX10 and put Zeiss zooms on them (and made them par focal as well....) or they would have made all camera with only 50mm equivalent lenses and been done with it. I'm happy it didn't turn out that way because few things make me as happy as putting wildly inappropriate lenses on crazy small bodies.

In the illustration above I'm using a Rokinon (Samyang? Bower? etc.) 85mm 1.4 Cine lens on the G6. Our main camera for the project will be a Panasonic GH3 sporting a 50mm lens. I really like shooting video with the G6 because I can set up and fine focus with the focus peaking and I can punch in and magnify the frame to confirm really spot on focus. The 85mm is something like a 170mm equivalent on the m4:3 bodies and in this application, where I want a really tight shot of a person talking to use in editing as a cut away, it's just right. Since it's such a long focal length I can put the camera much further away from the subject and still get a nice, tight frame.

Why not another GH3? Well, the color between the G6 and the GH3's matches up very well and I don't feel like I have to shoot at super high res for my quick b-roll shots. The other reason is that the focus peaking on the G6 makes set up and focus confirmation with this long lens quicker and easier. I can punch in with the GH3 but I can't monitor zebras as I go.

A lot of people are writing about "hybrid" use of small, inexpensive digital cameras like the Panasonics and the Olympus OMD EM-1 and I think that everyone is on the right track. Done well these inexpensive cameras can rival much bigger and much more expensive DSLRs. That opens up the field to everyone. But where I think a lot of people are missing the boat is in not using multiple cameras for production. Many traditionalists, from the video and the still sides of the aisle, still have the idea of having one "perfect" camera to do everything with. In video that means setting up and shooting one angle and then setting up and shooting another angle over and over again. In many situations, such as conversational style interviews you need to be able to cut back and forth between two speakers and to make things more interesting and have more footage to use in edit it would be nice to have head and shoulders shots of each person in the conversation as well as a wide shot that covers both people.

Now we can do that inexpensively by adding several six hundred dollar cameras to the mix. One on the wide shot and one each on the tighter shots. With all the cameras running simultaneously you have so much more material to choose from.

And the same holds true for dramatic work. You can have one camera on a scene that's handheld, a wide camera and as many different points of view in other cameras scattered around the scene. Total coverage for each scene in one set up. The low priced cameras are a boon to film makers.

I'm extending the idea into stills. I have a portrait shoot with a series of professionals this week and I'm planning to use a big Sony camera for the "hero" portrait. That would be the classic, looking into camera shot. But I'm planning to have at least one additional camera set up to do a series of more casual shots from a slightly different angle. I'll be able to trigger that camera remotely with a radio trigger. That way I can get double duty from each sitting.

Shot notes: The image of the G6 and 85mm Rokinon was shot in studio with a Sony RX10 using a combination of florescent light and a Fiilex P360 for backlight. It was shot at ISO 100 and processed normally in Lightroom. Blow it up and look at the quality. It's reduced to a bit less than half the original file size. I think it looks pretty good.

Posted by Kirk Tuck, Photographer/Writer at 11:53

Do you have a reference for that stat about people using kit lenses?

Hi Kirk. Long time reader - love your blog and your willingness to adapt to the ever-changing stills+video marketplace.

Totally agree about the G6 - given some of the deals at the moment it is a great stills+video combination for the price. A bit of a bargain really, especially if, like me, you are leaning increasingly towards video. I use it as 2nd videocamera along with a GH2 and love the focus peaking.

Also based on your blogs I recently snagged a couple of the 312 LED adjustable colour temp panels. Here in the UK they are available through Amazon under Polaroid branding but seem exactly the same as the fotodiox(?) ones you rave about. They are great to use in the UK during these dark winter days to help add a little light whilst videoing.

Jason. You bet. Sure. It's in the bibliography. And cross referenced in the list of references. Why do you ask?

Howard, I'm loving the G6 as an all around multi-media machine. I was fortunate enough to pick mine up, with lens, one afternoon before the holidays when Amazon went crazy and offered them for $495. I'd do it again!

Hey Kirk, Mike Gaskin from the now defunct Austin Photo Lab. Been here in Mexico since you and Paul took me to lunch that last time. Enjoying your blog. mike