What I learned from a really smart photographer back in the early 1980's. 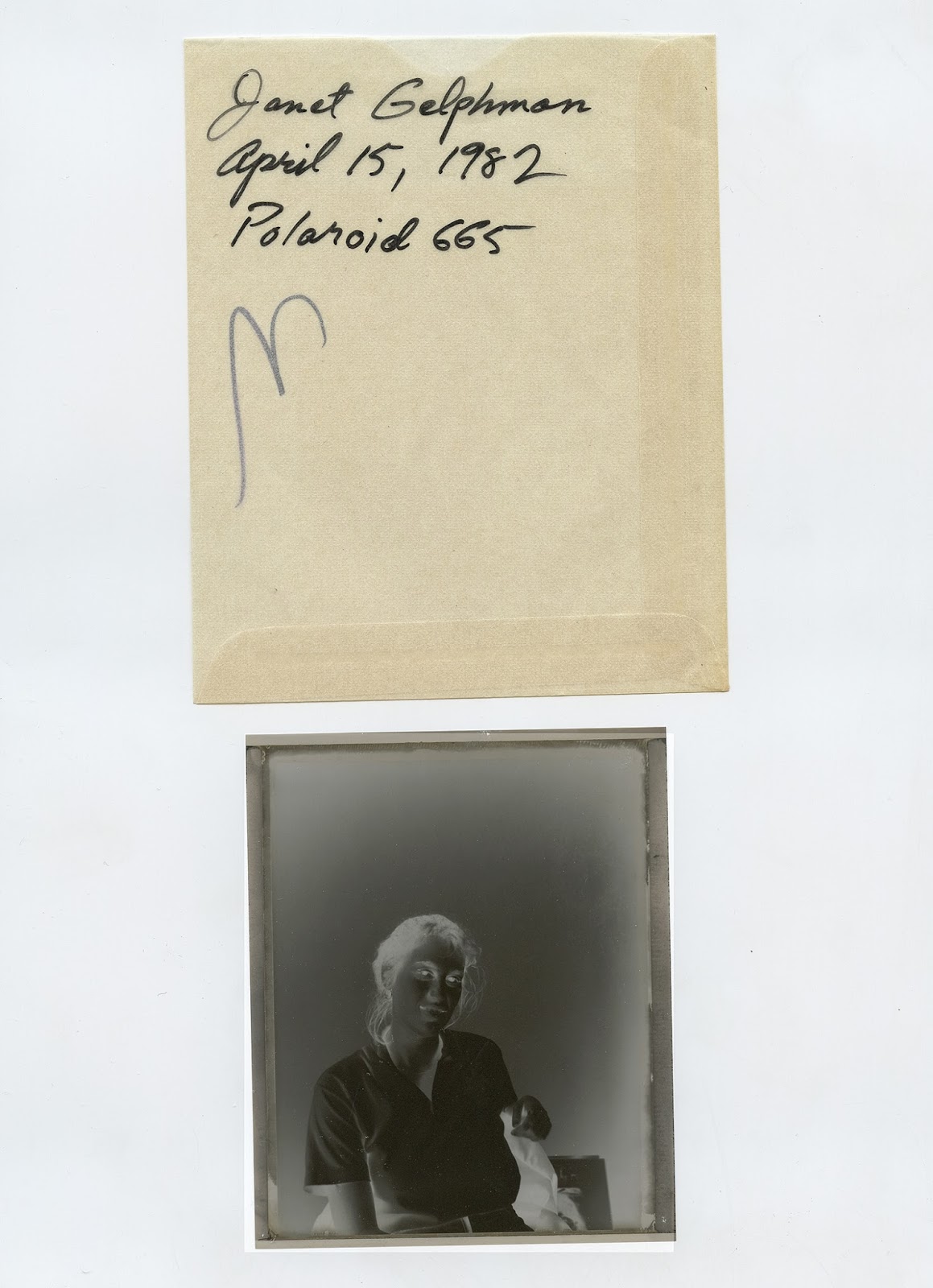 This is a Polaroid 665 negative. 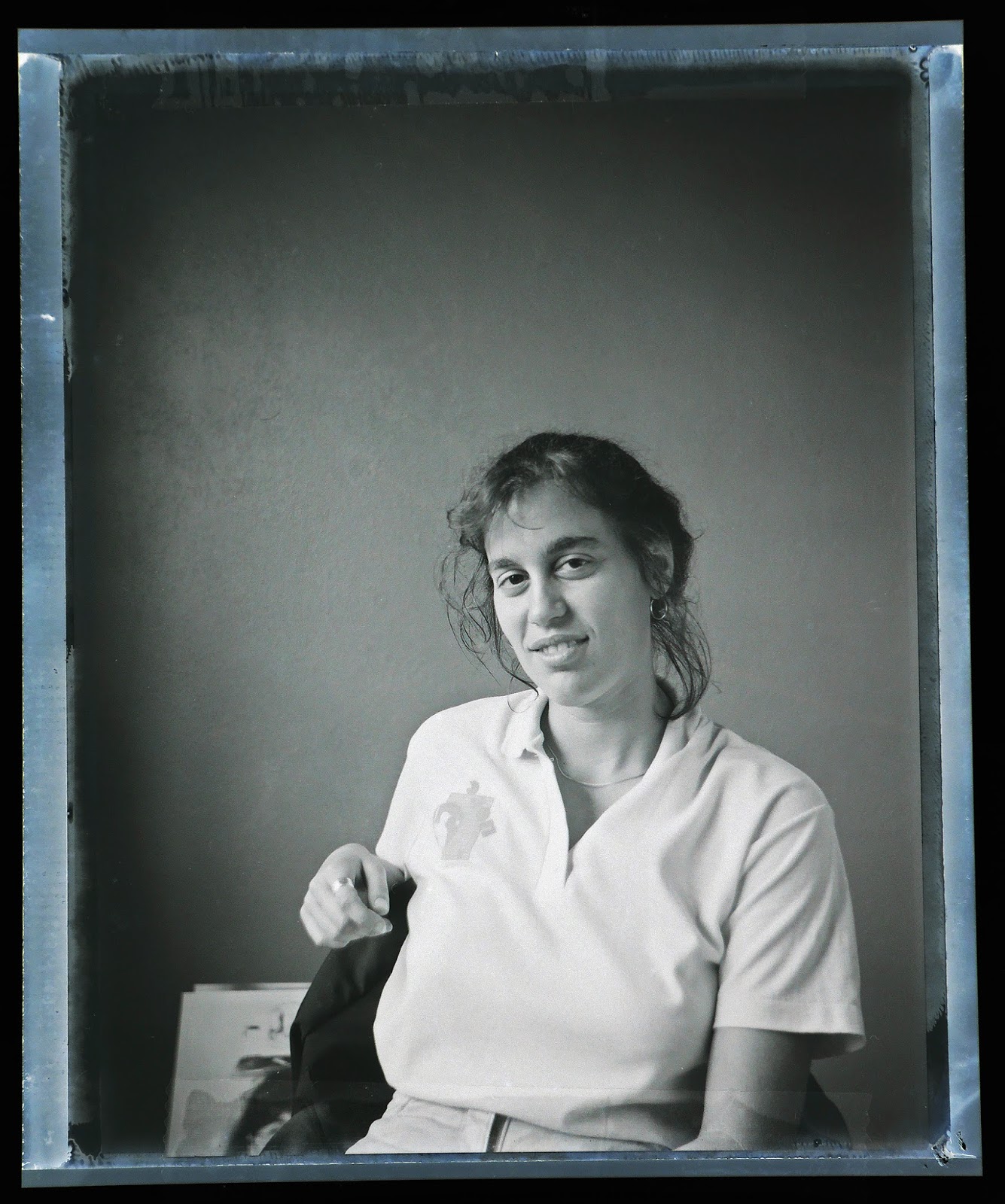 Everyone has mentors and influences in their photography careers and one of the first ones I was blessed with was a woman named, Janet Gelphman. I met Janet because we both were members of the Ark Darkroom Co-operative, located at the Ark Co-op college dormitory near the University of Texas at Austin. The darkroom had a big Omega enlarger that could print negatives up to 4x5 inches. It also had a couple different light heads which you could interchange depending on the look you wanted to get in your final images. The cold light diffusion head was a softer light source and reduced the contrast (and some of the need for fine spotting) on the final prints. The condenser head belted out direct, collimated rays of light that gave a darkroom printer excellent clarity and contrast. There were rumors of point source light heads that would give a scalpel like sharpness to prints but we were not brave enough to own that one.

I met many photographers there who have become quite well known including Will Van Overbeek and Ellis Vener. The darkroom was very utilitarian and only set up for one person to print at a time. It was laid out in an "L" shape with the hardware on one part of the L and the sinks on the other part of the L.  We had clotheslines strung across the room festooned with clothespins for hanging prints for air drying. There was a ferrotype dryer but I never used it after the first time I tried to operate it while standing on a damp floor barefoot. I discovered electrical grounding, unlicensed flying and unskilled landing all in one shocking moment..

There was also a print drying box with flat screens as well as a film drying box in which you would clip the long lengths of your wet Tri-x film to dry dust free....kinda. In the late 1970's, when I discovered the place, it was booked nearly around the clock. We had a sign up sheet on the door and we allowed three hours if there was someone else signing up. If no one else was signed up you could go as long as you wanted. We all chipped in for chemicals but everyone brought their own papers.

Legend had it that the Ark Co-op had originally been the Tri-Delta sorority house at UT and the room which later became the darkroom was the room of Farah Fawcett. I have no iron clad collaboration but it seems likely.

Anyway. Janet hired me early on to help her with a daunting project, from which I learned lessons I still hold dear today. The project was this: She had been commissioned by one of the colleges (the physics or math school, if I remember correctly) to create large black and white photographs of physics concepts. To take the ideas of science and make visual representations of them. Most of the visualizations required lots and lots of propping and some special (in-camera) effects. All of them would be printed to the same final size which would be four by five feet. On double weight, fiber, Ilford Gallery printing paper which would eventually be mounted on board for installation.

Janet was a wizard of the 4x5 view camera and spent lots of time under the dark cloth getting things just right. She taught me to focus and manipulate the movements of a view camera. She also taught me how to load and unload sheet film correctly and even how to develop it. I know she had other cameras and I think they were Olympus OM-1's but to this day I can't visualize her with anything other than the 4x5.  Her understanding of the science of photography was immense but it was all pressed into the service of her art. No gear grandstanding. Beside, back then if you called yourself a professional photographer you pretty much had to using a 4x5 inch camera as well. Even if only for some of your clients.

I assisted her in making the shots (which is a story in itself) but the real focus of today's blog is to describe the darkroom processes we went through to print the images. The development of the negatives was straightforward. It was the printing that was the tough part. We needed to remove the enlarger from one part of its table and re-orient it so that it would cast its image from ceiling height all the way to the floor. That was the only way to create an image large enough to cover the paper size and give us the ability to do minor cropping. This meant that we had to design and build a floor sized easel to hold and mask the paper. We built this out of plywood and two inch by 1/4 inch steel plates that were five feet and six feet long.

In order to get maximum sharpness from an enlarging lens optimized for 4x to 12x enlargement we needed to be sure to stop down to f11.  That meant, with thicker negative, that our enlargement times (with tested reciprocity factors) could be as long as three or four minutes. Some took even longer. And the ones that required burning and dodging were torturously long.

Our next big problem was print development. The conventional wisdom was to use long tubes, like PVC, with the prints rolled up inside. Of course we had to have some material sandwiched in between the roll of the paper to ensure that it didn't all stick together and that the developer and other chemicals could flow across the surface. We used thick plastic netting, tried diamond patterned plastic and several other methods but we always came away with problems in the final prints.

We bit the bullet and actually designed and built three large, wooden trays out of plywood and resin and stacked them, via edge pillars to fit in the allotted flood space in the darkroom. The developer was in the top layer, two feet under that was the stop bath and two feet under than was the fixer. We saved the PVC for the washing. Next up was solving the issue of getting good agitation in all the baths. After much experimentation we came up with the "I'll roll it toward me and then you roll it toward you" method. We'd stand on either side of the tanks and roll or unroll, as required.

One of the problems we didn't take into consideration was how much of each chemical would be released into our tiny atmosphere from so many square inches of exposed and commingled chemistry. Our coffee breaks became, out of necessity, more and more frequent.

Here is our workflow:

1. climb the ladder to focus the enlarger and hit the composition.
2. tack small  (one foot by four foot strips) of printing paper to the easel for test prints.
3. expose a test strip (which required about ten minutes each for multiple exposure samples.
4. develop test print.
5. dry test print in the microwave oven and evaluate dry print.
6. roll out the right size paper from the factory roll and cut to size with razor blade.
7. place paper under steel plates for flatness.
8. Expose (which could include many minutes of exacting burning and dodging).
9. Carefully transport paper to first tray and immerse, roll back and forth for three minutes in tested dilution.
10. Roll up wet print and carefully drain then transfer to stop bath and repeat.
11. roll up wet print and carefully drain then transpire to fixer.
12. roll up fixed print with porous plastic substrate and carefully coax into PVC tube.
13. carefully wash and use fixer neutralizer for archival permanence.
14. Take out of tube and unroll then use a two person team to clothespin the large, heavy prints to the clotheslines. Use six clothespins for safety.
15. When all prints were created and dried we took them to a repro house and had them flattened in a print mounting machine.

Sounds easy, right? Well, we printed an edition of six prints per image and there was a total of twelve different images. That's 72 four foot by five foot prints! We did that many editions to compensate for crinkles and dimples in the paper from handling and any other accidents that might sneak up on the precious prints. In the end it was all worth it and the installation was beautiful. The detail enormous and the concepts apt but also wryly humorous.

So, after weeks and weeks what did I learn? Well, I learned that it's not enough just to have a cool vision you have to follow it all the way through. That the best artists refuse to compromise. (Janet could have spec'd a smaller paper size and knocked the project out herself but she saw it in her mind as 4x5 feet and she was determined to find a way to do it). That every problem in photography has some sort of solution that is only circumscribed by the artist's imagination. That some infrastructure doesn't exist so you must design and build it yourself. That once you get rolling you might as well keep rolling until you are too exhausted (or overcome by fixer fumes) to go on without sleep. That the art is more valuable than the pay. That the learning to learn is the valuable lesson. And that we really played hard back then.

I certainly don't think Janet made a fortune on this project. Not a project for a university college back in the 1970's. And not with all the experimentation and innovating we ended up doing.  But I do think she was happy that she was able to make conceptual stuff into visual stuff using a balanced mix of vision and technical virtuosity.

But the biggest lesson I learned is that photography can be hard, hard work and being a prima donna doesn't get the work done, on working hard on stuff makes it all come together. And finally, I learned that if there's one little glitch we start all over again until we get it right. Not because the client will notice but because we will notice. So, thank you Janet for lots of valuable lessons.  We still practice them today.

Shoot big, print big, show big. Or something like that....

Posted by Kirk, Photographer/Writer at 17:43 7 comments: