Dear VSL Readers, Belinda and I clicked the final boxes and uploaded the long-awaited Novel, The Lisbon Portfolio, to Amazon. 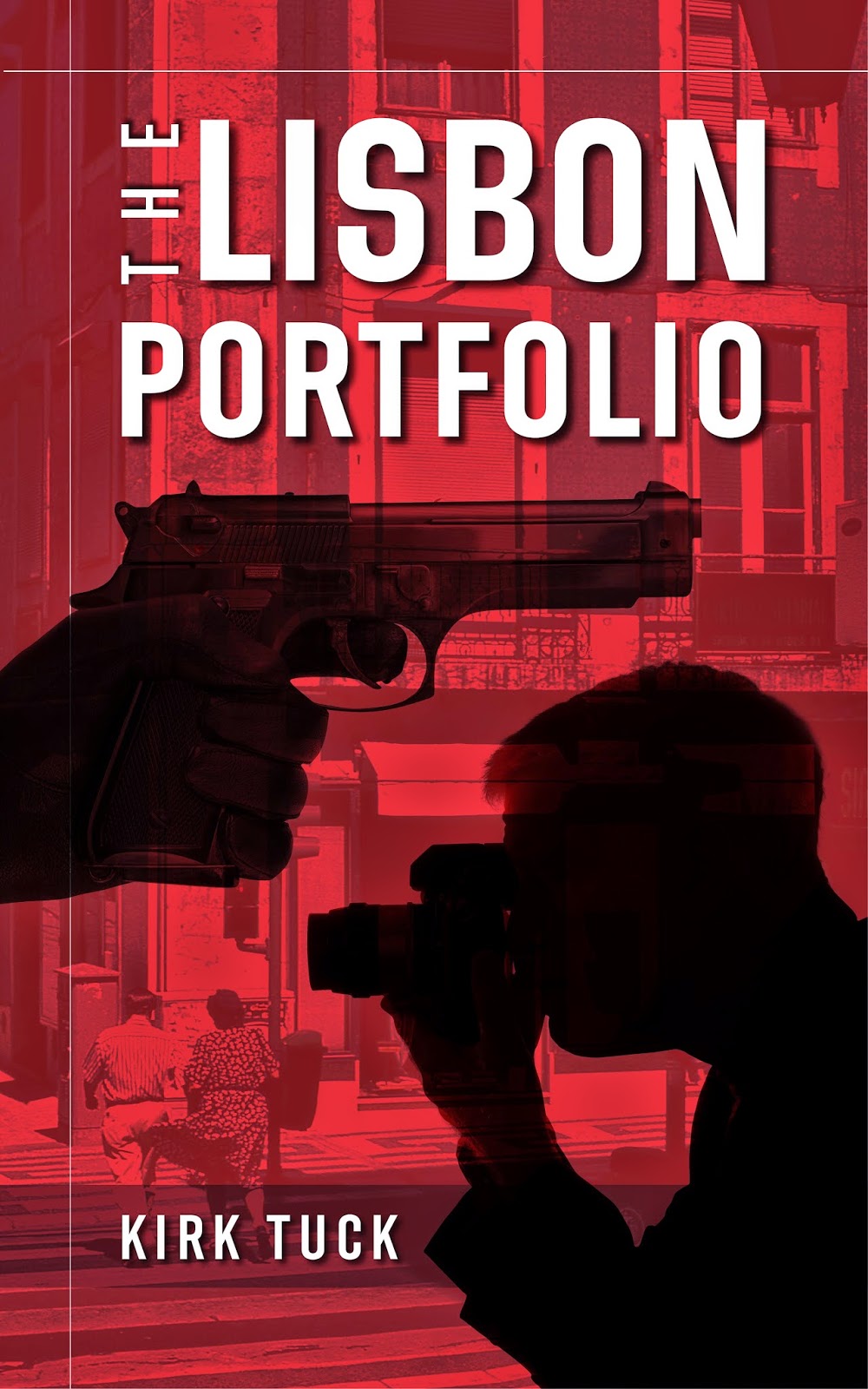 The Lisbon Portfolio. A Novel by Kirk Tuck.

It takes about 24 hours for a book to upload and go through the Amazon process to become a Kindle book. We should see it show up on the Amazon.com site and on my Amazon Author's Page by tomorrow evening (Tues. the 17th of June). I'll post the link as soon as it becomes available.  The link is now live: The Lisbon Portfolio.  We are publishing it first as a Kindle Book and as soon as that goes smoothly we'll start formatting the printed version and get it up onto Amazon as quickly as we can. We'll branch out from there.

Here's the elevator speech: Our hero, Henry White, has been earning his living for the past seven years as a professional photographer specializing in documenting corporate events and shows. In his previous career he was an intelligence field researcher, working for a government agency, until his anxiety got the better of him and he resigned. His cover as a researcher was: a corporate photographer. The difference now is that he needs the money and the assignments and--- there is no safety net.

While on assignment for a multi-national, technology company in Lisbon, Henry White gets pulled back into a web of danger and intrigue by his old boss from the agency. After stumbling into the middle of a bloody and dramatic confrontation between multiple bad guys he'll need all of his wits and training to make it out of Lisbon alive. And he'll risk life and limb to keep a terrible new technology off the underworld weapons market before it makes nuclear war a very local issue for everyone.

The story takes place in 1999, just at the moment when digital cameras started to replace film cameras in the weathered shoulder bags of the first few adventurous, professional photographers. Henry must balance his need for this paying job, and his need to keep a few demanding meeting planners happy, with his duty to help prevent an escalation in miniaturized weapons technology from hitting the marketplace.

The story weaves a very authentic look at the everyday life of a working photographer, on an assignment in a foreign capitol, with an action-packed, fast moving, deep dive into a thrill ride of fictional action and adventure.

The book will be available for only $9.99

I'm so thrilled that I'm finally able to share this story with all of my friends. Thanks to everyone who encouraged and prodded me to resist resistance and to finish it. And thanks to Steven Pressfield for writing The War of Art. His book made all the difference in the world to me.

I hope you'll buy a copy of The Lisbon Portfolio, read it and comment about it. I'd love to hear what you think!

Best to all my readers, Kirk

Posted by Kirk, Photographer/Writer at 23:02 28 comments:

Packing for a shoot. Getting everything into two cases and a camera bag. I have a fun job lined up this week. I'm heading up to Denver on Weds. and I'll be there until Saturday evening. It's a conference and I am one of the photographers who will document the people, the speakers and the events. Normally, I'd just head up with a small carry on case with some changes of clothes and a small tripod. That, and my camera bag.

But this time we're replicating something we did last year when the same conference was held here in Austin. We're setting up an on-site studio with a nine foot wide canvas background, three lights and all the trimmings. We'll spend the first morning of the conference making portraits of organization officers, speakers and other event nobility.  Last year I was able to stuff as much as I wanted into the capacious back end of my Honda CRV, including my magic cart, and I could park directly under the hotel and drag up everything into the hotel meeting room.

I brought four or five A/C powered, monolights, a posing stool, big light stands, a robust and intimidating tripod, and back up stuff for everything. When you can bring the kitchen sink why not also bring along the gas grill and the mini-fridge, just to be comfortable?  We had fun last year and we inadvertently trained the client to appreciate the fully implemented, studio portrait treatment.

This year I'm flying up to Denver to participate and I'm bringing along a version of the temporary studio. But this year everything has to fit in two cases that weigh under 50 pounds and are the correct size for Southwest Airline's baggage restrictions. Oh boy! Condensation packing! How to do the same with less!

I immediately went into research mode and consulted the acknowledged expert in the field of Minimalist Lighting. In fact, I was able to pull down one of this books on the subject from my bookshelf and start wading into the information.

Seems that with a little ingenuity you can put together a portable, battery powered system that will give you the same look as a monolight system with a few compromises. My portable system won't have modeling lights so I'll leave the room lights on while I shoot so the camera and I can focus. And I won't really be able to shoot through big modifiers and get f16 on a subject ten feet from the front of a soft box---but I never do that anyway.

So here's how it's coming together on late Monday afternoon. I have a 48 inch long, 10 inch by 10 inch Tenba light stand case with wheels on the end and on the bottom. In that case I have two background stands and cross poles. Three Manfrotto Nano stands with cold shoe/umbrella adapters on the tops. A bigger stand for the main light and a back-up stand, must in case. I also have packed four 43 inch umbrellas. Two silver and black, two shoot throughs.

Also wedged into this miracle case is a little Pelican sub-case with wireless triggers and receivers along with a "carefully folded" muslin background. The same one we used last year. Love the idea of continuity, right?

Well, what about the lights? I looked around to see what might be cheap and new and fun and I decided on the Yongnuo YN-560 II Speedlights. On the day I bought these flashes they were $46 a piece. I couldn't help it. I bought three. What are they? Basically they are fully manual flashes with built in optical slaves that have two modes. One mode is a straight ahead slave while the second mode delays the flash assuming that your on camera flash will do pre-flashes for stuff. I don't care anything at all about the second mode but I bought the units for the first mode.

The 560's bounce and they can be turned all the way down to 1/128th power. Did I mention that I bought them because they were cheap and had built in optical slaves. I immediately stuck batteries in and hit the power button but nothing happened. So I did what 313 reviewers on Amazon.com did not do---I sat down and read the manual that came with the units. Hey, guess what? You have to hold the button down for about four seconds as the flash goes through a start-up cycle. I can imagine this is a great feature which will prevent accidental ignition in the camera bag and the resulting battery drain.

I tested the flashes in the studio and was happy with color and performance. I added a Sunpak flash which also has a built-in slave as well as my giant, ungainly and ready-to-shut-down-at-the-slightest-hint-of-heat, Sony HVL-60 flash (which I keep, stupidly, in case I need to use it with the Sony RX10).  Just to add a cherry to the top of the pile I added the little Panasonic DMW-FL360L flash. I figured this one would come in handy on the GH4 when I'm walking around taking spontaneous social images...

The two equipment cases roll up to curbside check-in and are well under the weight and size limits. The camera bag is lighter than with any previous system. Now I just need to remember the deodorant and to trim the nose hairs and we're ready to party.

Hope your father's day was great. I got to "snake out" the air conditioner condensation hose before we ended up with an inch of water on the floor. Much fun.


in other news: Belinda and I finished working on, The Lisbon Portfolio. The photo/action novel I started back in 2002. I humbly think it is the perfect Summer vacation read. And the perfect, "oh crap, I have to fly across the country" read. It's in a Kindle version right now at Amazon. The Lisbon Portfolio. Action. Adventure. Photography.  See how our hero, Henry White, blows up a Range Rover with a Leica rangefinder.....


Remember, you can download the free Kindle Reader app for just about any table or OS out there....
Posted by Kirk, Photographer/Writer at 17:36 7 comments:

A very well done blog post (also available as a podcast) from Mats Andrén called "Five Thoughts on Being a Photographer.

I liked reading this and enjoyed it even more when I went back and listened to Mr. Andrén present it via his podcast.

Andrén is a photographer and a walker and right now he's walking across the U.S. He should be in Austin by the end of the month and I am looking forward to having lunch, dinner, coffee or whatever he would like in order to spend some time with him and listen to his stories.

Andrén got in touch with me because of the blog and it's one of the wonderful benefits, to me, of throwing the doors of my mind open to the world. Sometimes (usually) you get some great stuff back.
I hope Mats has some images of the American South he wants to share with me...

Please enjoy his blog post while Belinda and I spend the day uploading the novel to Amazon.com and getting all the kinks worked out so you can really enjoy it.

Posted by Kirk, Photographer/Writer at 10:18 No comments: