A frustrating day. Thank goodness I had nothing urgent booked. 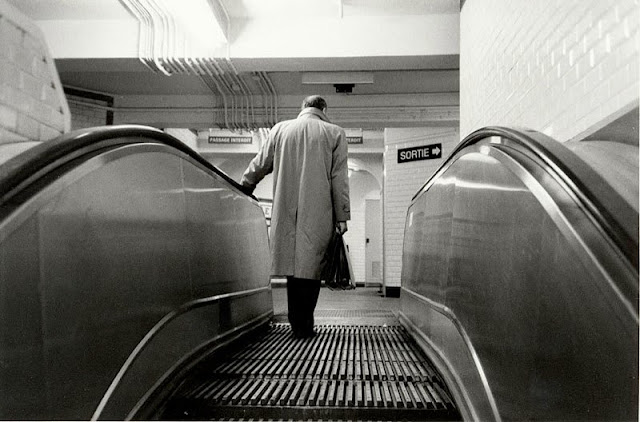 There is street photography and then there is escalator photography. The vintage version (above) includes escalators in European capitols with wooden slates on the steps...

I woke up this morning with a list of things to get done. One was to get my car inspected. In Texas one must get one's car inspected before the registration can be renewed. Seems easy enough. There's Chevron gas station down the road that does state inspections. Usually takes twenty minutes; tops.

I answer my urgent (?) e-mails, read the news, have breakfast, walk the dog and now I'm ready to tackle car stuff. I find my proof of insurance, along with the paperwork for the registration and head out to the car. Which does not start...

It started yesterday but, to be honest, I seem to remember that the car was a bit hesitant to turnover. One of those realizations that only hits you when you are confronted with a ton or so of useless metal a bit later.  The starter motor made the feeble sound commensurate with a dying battery and, after several attempts, went mute altogether. Crap. Battery. Time suck.

I borrowed Belinda's car and drove to my friendly, somewhat convenient, Costco to buy a replacement battery. Oops. My Costco membership had expired. Goodbye another $50 bucks. Now, newly re-upped and in good standing, I followed through on the battery purchase.

Upon returning home I Googled once again, "How to safely replace a car battery." Then, intellectually armed, I grabbed my tools and popped the hood of the Honda CRV. The battery inside described itself as a "100 month" battery and yet, we were only 26 months into its service, as of today. This was my second "100 month" Honda branded battery but have only owned the car for a total or 36 months. By my rough estimate Honda still owes me another 44 months of battery-ism. But given their track record I am happy to suck it up and replace it with a different brand from Costco. At Costco, when one of their 36 month batteries gives up the ghost earlier than expected (or promised) they just give you another one. Honda, and most everyone else "pro-rates" battery life. Which means they'll give you some small percentage credit for your next faulty and too expensive replacement.
No thanks.

So, I jostle around in the heat and humidity and change the battery. But wouldn't you know it? Honda uses some sort of clamping structure on the negative terminal that I've never seen before and, try as I might, I can get it quite tight enough to stop from moving easily if I pull or push on the cable. Something new to fix....

But the car starts right up and finally I feel as though I'll be able to make progress, get the car inspected and then registered. Today.

I drive over to the Chevron station and hand the keys and my proof of insurance form over to the grumpy mechanic. He drives off in my car and comes back a few minutes later. "Your car failed." he said. "Wha?"

"Did you just change the battery?" he asked.

"When you do that it erases all the emission information. You fail the test."

"But what can I do now?" I am baffled. Is this a permanent condition? Will my car ever be inspectable?

I pay up and then get back in the car. I won't be getting my inspection today. Well, I guess I could drive around in circles and then head back but it seems a bit pointless. Instead I take the old battery back over to Costco to get a $15 cash payment for recycling my old battery. I eat a slice of pizza and it's pretty good. Then I decide I've already wasted the whole morning, why not drive to the Honda dealer and see why the heck the negative battery clamp won't tighten.

Two mechanics work on it for twenty minutes and figure out the brilliant and complex engineering that will keep the electrons flowing. And I am home by 2 pm. About $150 dollars poorer and still no closer to having a car with an inspection or a new registration sticker.

I think two things. 1. Thank God I didn't have a big shoot scheduled for this morning. 2. There's always tomorrow...

Car stuff sucks. If I had a personal assistant this is the kind of crap I would make them do. Then I'd have more time to read all the new product announcements from Photokina on the web.


Posted by Kirk Tuck, Photographer/Writer at 15:25

I feel your pain, while we were stationed in San Antonio (TX) many years ago I had a similar experience. What I recommend is find a garage/service station, or even the Honda dealer (if they do inspections) to take care of "all" of the maintenance on your vehicles. When you find an honest one (they are out there), build up a a relationship with that person/vendor/shop. The honest ones are going to treat you like you treat your clients, like a friend.

I feel your pain. Trading in my mother-in-law's old 2G phone presented some equally fun moments/ er half hours of exasperation. At least you had pizza, nature's wonder food.

Well you gave me a laugh at least! Sounds like an episode from Gilbert and Sullivan. I bought a Honda in 1996 and traded it in about 11 years later with 350,000 km (about 220,000 miles for non metric folks) and it was still on the original battery. They must have fired the guy who designed my battery for loosing them business opportunities.

Been there too (was a battery not a starter). Calif finally realized all this emission buffoonery was a waste of everbody's time & and money and went to a faster visual-only check on cars made after 1999, every 2 years.

We have a 2012 CR-V, one of the earliest off the assembly line since my wife desperately wanted the new look back in December 2011. Early versions of the 4th generation CR-V (2012 and later) had charging problems that were finally corrected with a software update (hey, just like our cameras!).

We're on our 3rd battery (the original + 2) ... this last one has worked great the past 18+ months post charging software update, knock on wood.

For us, Honda has generally followed the old Apple mantra of "it just works" -- we have three Hondas at the moment. The unscheduled maintenance issues are far enough apart that I accept them. For the times I strayed from Honda (read VW and Mazda), I was in the shop much more frequently.

The CR-V may be the last car you own. In the future (say 10-15 yrs away) we will simply use an app to have a self driving device show up in our driveway and take us to our destination which we will have programmed into the device via our (super) smart phones. Hope you don't enjoy driving the old fashioned way.

anonymous, if you think I'm waiting ten or fifteen years to buy a new car you are insane. I like the idea of self driving cars but that's a long way off. As soon as that kid graduates from college I'm ordering my own Aston Martin Vantage. You can sit in a tiny, slow smart car and play with your phone if you'd like, just watch out for all the crazy people in their ancient (non connected) giant, pick up trucks running the red lights and killing the passive riders of Google's next flight of whimsy...

Pro Tip: Always leave the ground cable to the battery slightly loose; i.e., just loose enough that you can eventually wiggle it off the battery terminal by hand.

This way, when you have a short somewhere and a wire gets red-hot and the insulation starts to burn, you can cut the power immediately rather than watch the car go up in flames while you scramble to find the appropriate tools.

Don't ask me why I recommend doing this. 8^(

We're all old enough to remember that Rush song, "Red Barchetta" where the lyrics talk about the many classes of vehicles that are banned because of "The Motor Law". Maybe your future Aston Martin becomes your Red Barchetta.

I'm all for self-driving cars where the self is me, and the car is a 6-speed manual, normally aspirated ... an Aston would work! I think "robotic car" or "autonomous vehicle" are better terms for "self-driving" cars. When did cars become people?

Sounds like you could be a Goodfella. :-) Speaking of losing the emission data, that happened to me 3-4 years ago also. My battery had to be replaced and the same day I took it in for inspection. I had been out of town for over a year and the car had been sitting unused. Anyway, I was lucky because I didn't have to pay anything. The guy told me I needed to drive it for awhile and then bring it back the next day. Lucked out. Good guy.

Hi Kirk, I suggest, as one who also has an old car, to get an OBD scanner. You'll save a lot of money. You can check the codes and even reset them so your warning light goes off. In my old Toyota there's an issue in the fuel tank evaporative emissions that does nothing for the car but when the light comes on intermittently, if there was a different issue I wouldn't know what it is. So this OBD scanner lets me check the code, and reset it, which turns off the "check engine" light. Plus you can, yourself scan it to see if it's ready for the emissions test without paying $18.50! This is the brand I got. http://amzn.to/2di8miG and I got the Autel AutoLink AL319 OBD II & CAN Scan Tool because it has a display to show what's going on. The first thing I did of course after getting it was update the firware, which first necessitated loading their Windows software and doing a couple of downloads via USB to the scanner. I'm not sure it that's fully necessary but I've got a habit of always updating firmware. And if you can update a Sony camera's firmware you can do anything!