Fun with cameras. Shooting belts all day yesterday for Klikbelt. Stills with a Sony a6300, video with an RX10. 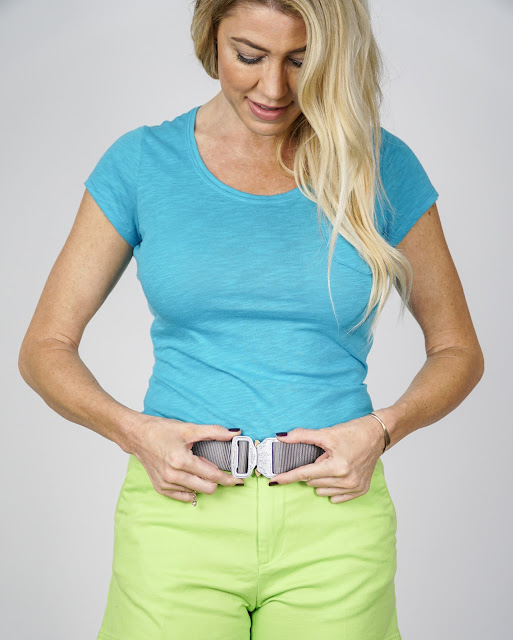 Yesterday I had fun shoot with a company called, Klikbelt. They make belts that incorporate an Austrian made, quick release buckle originally designed for military use. The belt is selling well as a fashion item and also in hot demand from people who need, well, quick release belts. Our assignment was to show off the range of belt and buckle colors. You can combine silver, brown, and black belts with silver and black buckles. We spent the first part of the day in the studio.

I set up my usual studio lighting for situations in which I'll be shooting both stills images and video. I'm using a 6x6 foot diffusion scrim over on the left side of the frame and filling with a 24 by 36 inch softbox on the opposite side. The big diffusion scrim is powered by three of the CooLED 100 watt units while the softbox is lit up with another 100 watt unit. Our basic exposure for the subject position (single person, standing) was ISO 400, 1/50th of a second, f4.0. The light was even, soft and still directional.

The very first shooting task was to shoot "how to video" about how to actually put the belt together. You need to loop the belt through your belt loops before attaching the unattached part of the buckle. It's hare to explain but very easy to understand if you are watching a step by step run through. Since the lighting was set for video as well as stills we were able to interchange cameras on the fluid head on top a big Benro tripod and immediately start shooting. I used a Sony RX10 for video because the new XAVC codec looks really good in 1080p and we would not need anything larger since the videos will be used exclusively on the client's website.

Twenty minutes later we switched cameras to a Sony a6300 with an 18-105mm f4.0 G lens and got busy shooting all the endless variations of belts and buckles on both our male model and our female model. We alternated models for efficient wardrobe changes and were able to get a huge number of shots down by lunch time. I think the secret to working fast in the studio is good preproduction and that's something the guys at Klikbelt really delivered on. They has their shot list narrowed down, the wardrobe sized, prepped and ready and they hired two great models who've done this kind of work professionally. I made good, solid meter readings and put marks on the floor of the studio to designate exact exposures for people standing in those spots. I also set a custom white balance, reading the light color at the subject position, before we got started. 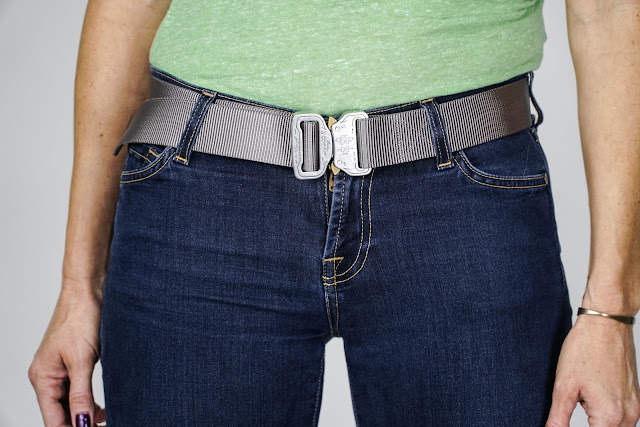 In my daily business I try to make sure that the studio is completely set and lit the night before we start a shoot. There's no sense wasting a client's time and the time of their talent while I set up diffusion panels, tweak lights and generally arrange stuff. I also make sure we have plenty of snacks, bottled water and a Keurig coffee machine with good K-cups. Nothing fancy but enough fuel to keep everyone rolling through. I spent Monday and Tues. working on a product shoot, and all day Weds. knocking out the post production for that shoot so the set up for the belt shoot got done Wednesday night, after dinner.

The client checked images on the monitor as we went along so, no surprises for anyone at any point in the studio shoot. Once we'd gotten all the studio work done everyone packed up the wardrobe, I tossed the necessary gear I'd need for the afternoon into my car, and we all headed out for lunch.

After lunch we headed over to the Austin Rowing Dock for some paddle boarding and then hit some locations in Zilker Park. We finished up the day with a spur of the moment video that was creatively sourced from our talents. Shot handheld with the Sony RX10 and a Zomei VND filter. It's hilarious and fun, and all about the belts. I'll try to get a working copy up in the next few days. 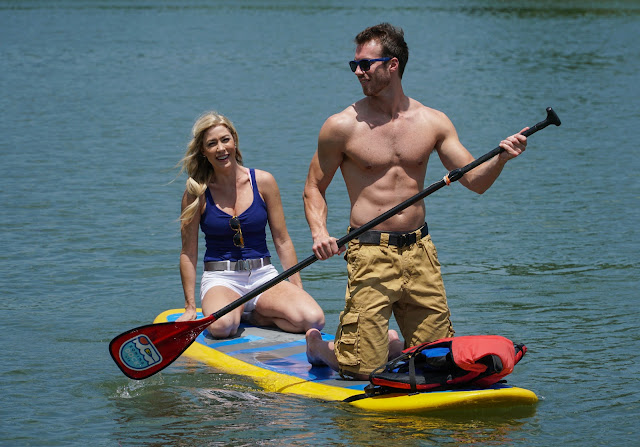 The folks at Klikbelt are really into the advantages of extensive social media so, for a change, I was allowed to post whatever I wanted from our shoot; immediately. None of the images here have been retouched or highly corrected. That will come after the client and I have narrowed down the large number of files to a small bucket of just the good ones. I did take a few minutes during the day to shoot some behind the scenes shots of a simple set up we used on the dock of the rowing facility. (See below). 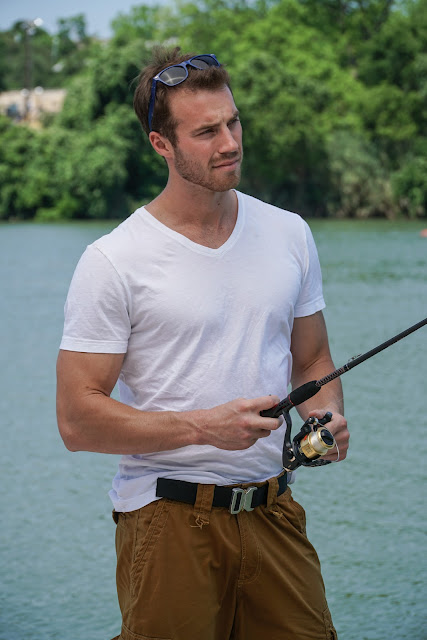 Our model, Chase, kinda fishing. The half tucked shirt is absolutely intentional and if it doesn't appeal to us we may not be in the audience the client was targeting with this series... 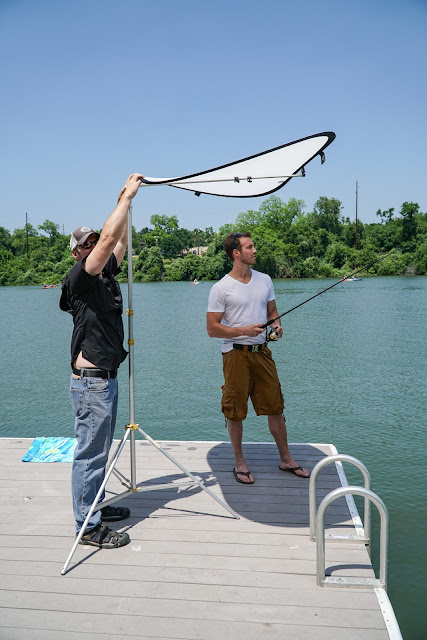 A scrim can be a handful when the wind kicks up but having a four foot by six foot, white diffusion scrim is a wonderful thing when you find yourself shooting in full sun. (Same set up for the image just below). 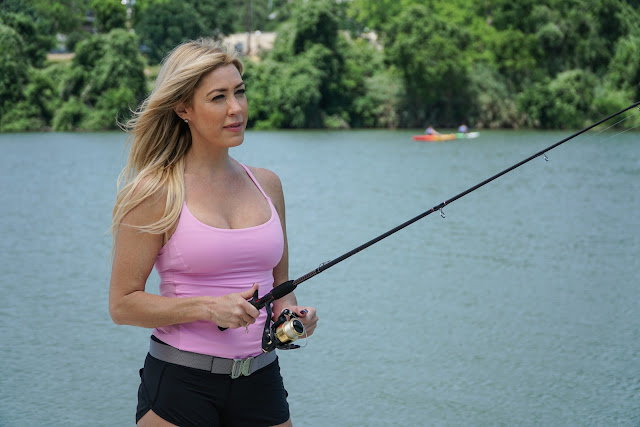 Our model, Stephanie, fishing on the dock. Lady Bird Lake in the background. 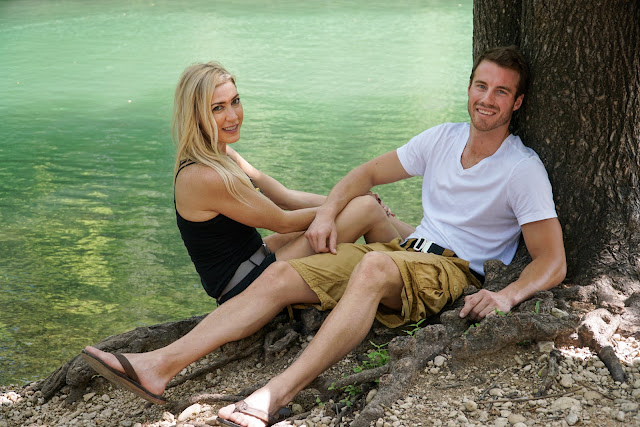 A Summer passtime in Austin is just hanging out down at the lake. There was quite a stir just down the bank from us as a large group of people hustled to get out of the water, quickly. Seems a six or seven foot long (dubious/dangerous looking) snake glided in from one side of the water and wiggled across to the other shore...

It was a good, fun day of shooting stills and video. A change from the earlier part of the week when I was working alone, shooting black box technology.

A quick few thoughts about tools: The LED lights are wonderful to work with in the studio. I love being able to put a softbox on a fixture or, fashion a snoot for some hard light using some black wrap foil. There is a speed and fluidity that comes with working in a purely WYSIWYG mode. It makes moving lights around, looking for the right reflection on a black face panel, so much easier.

In our "fashion" shoot, the LED lighting helped me switch back and forth between video and stills almost instantly. If we saw some action we liked during a still series we could stop and reprise it in video with a quick change of our cameras. It required no complex thinking, only a bit of direction. Even the shooting (video) camera was preset for exposure and white balance. Shooting quick inserts was a matter of putting the camera on a tripod with a quick mount and then pushing the red button and yelling, "action." (But, in real life, I don't really yell "action"...).

The RX10 worked well as a quick video camera indoors and, with addition of a variable neutral density filter, outdoors; even in direct sun. Right now, for fun, loose, unconventional video the two RX10s (the "classic" and the type 2) are my favorite cameras. I am consistently amazed at how great the images are out of those cameras for video (and for stills).

The Manfrotto, hybrid Still/Video fluid head (which I've written about before) has gone from "ho-hum" to my favorite tripod head lately. It functions quite well as a fluid head video tripod but the big ball head has a switch on the base that allows you to free it from its horizontal constraints and work as a well mannered and well damped, conventional ball head. I've long since put the panning arm in a drawer. It gets in the way for still shooting and, I find that I mostly just grab the head and pan it with both hands when shooting with these smaller "video" cameras. Love that I can take just one unit and have it do dual duty, with precision and grace.

The a6300 was my camera of choice. I've tested it a lot recently and (blasphemy!!!) find the super fine Jpegs to be really, really good. Especially if you take the time to manually set exposure and color balance. I didn't need the enormous raw files of the A7R2 and I was also anxious to lean on the smaller camera for very fast focus, fast frame rates and very good face detection AF. Over the course of the day yesterday I shot nearly 2,000 images using just two batteries. I have the "review" set to off, which saves battery power. And who needs review when you are able to "pre-chimp" every shot you make? The 18-105mm f4.0 G stayed glued on the front of the camera because it's a nice range of focal lengths, has really good image stabilization and the optical performance is totally satisfactory for all but the most demanding applications. It's a balancing act between that last 3-5% of performance versus smooth and efficient usability.

Why didn't I use the a6300 for both stills and video? Simple answer is that I like to keep the cameras preset for their dominant tasks. Shooting outside with the a6300 I wanted to leave the camera set at a high shutter speed and I wanted to use DRO to open up the shadows a bit. I didn't want to use that combination for video and I didn't want to make mistakes by having to dive into the menu to make changes while we had talent in front of the camera. Having two cameras, each preset to their dedicated tasks, is easier for me, mentally; and results in fewer user errors on a shoot.

The nice thing about using the RX10 is that it makes a great back up camera in a pinch.

The final device that I want to talk about is the simple diffusion disk. It's so wonderful to be able to stick a piece of material between the sun and my subject and watch the light open up and get pretty. It's the cheapest lighting tool I know of and I seem to use these collapsible disk reflectors on every shoot, for pretty much everything. From blocking the light from ugly sodium vapor fixtures, to taming sunlight, to providing UV protection for the photographer. I'm partial to the "five in one" variety of collapsible diffuser/reflectors that allow you to have translucent, black, white and silver surfaces just by changing around (or removing ) the covers. I have one here in the studio from Chimera that just celebrated it's 30th birthday. I have another specialty version from Westcott that is a one half stop silk on a collapsible ring. I use it often and keep looking for more at lower strengths than the typical, low cost versions (they use thicker diffusion materials = not as sexy but...lasts longer and is probably cheaper to source and use in manufacturing).

We are heading down the rabbit hole with our video shoot for a utility company so we'll see how an assortment of late nights chasing storms effects blog productivity. I already know that it's not conducive to a good swim schedule...... sigh.

Posted by Kirk, Photographer/Writer at 11:39 4 comments: