A VSL reader asked how I adapted a 50mm Carl Zeiss lens to my Panasonic G85. A quick explanation. 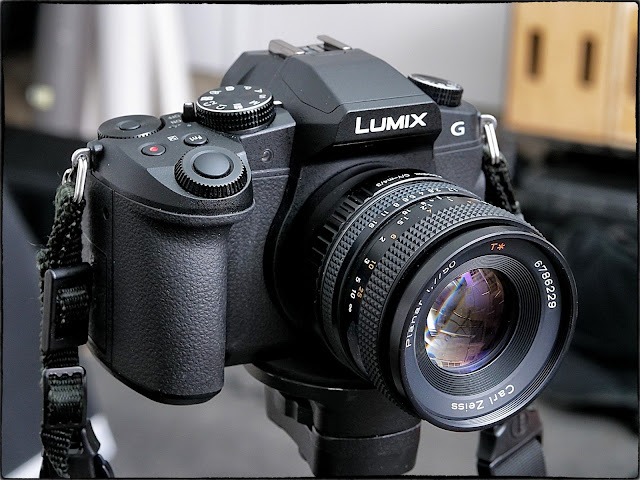 The Contax 50mm f1.7 Planar, made for the Contax Y/C manual focus mount is widely regarded as a stellar normal lens for full frame, 35mm format cameras. I bought a copy over a year ago and used it frequently on a Sony A7Rii, a Sony A7ii and a Sony A6300, all with great results. While I recently dumped the Sony cameras I was not foolish enough to get rid of the little collection of Contax Y/C lenses I've acquired.

Shortly after taking delivery of the twin GH5s I ordered a Fotodiox branded Contax Y/C to micro four thirds lens adapter. It cost me about $20 and allows me to use the 50mm f1.7 lens on any micro four thirds camera.  This is a great thing but comes with several caveats. First, I have no real way of knowing just how precise and absolutely planar the mount might be. I am taking a leap of faith that this sort of machining should be child's play in an age of unprecedented precision. I taped up the graph paper on the wall and lined up the camera as well as I could and tried to look for softness in one corner or another. Nothing leapt out at me as horrifyingly out of whack.

The second thing you need to be aware of is that for $20 you are NOT getting a Metabones smart adapter, you are getting a totally dumb adapter. This means that the camera can't record any metadata for the lens you have attached, won't know the focal length, won't know the aperture at which you are using the lens and ----- absolutely won't autofocus the lens for you.

Most of these things don't matter to me but may be very, very important to you.

On some cameras you'll need to dive into
the menu and find a control that allows the camera to shoot even when it doesn't have a lens on the front. This allows you to use the camera in a mode that allows just about any lens that will fit (with an adapter) into the lens mount to work. The shutter fires and the image gets taken.

For photographs I use either the camera's manual exposure mode or aperture mode. In aperture mode I put the camera into "constant preview" so I can see what kind of actual settings the camera is using to affect exposure. For carefree, non-critical photography I find that focus peaking in the Panasonic bodies works pretty well. It's not perfectly critical but, in conjunction with the format's depth of field, I rarely find myself getting into focusing trouble. When I do want to make sure were absolutely nailing focus I use the camera's focusing magnification which shows useful images up to 8x and a sloppy, less sharp image at 16x. I can focus with great accuracy in this manner.

One thing to note which through me for a loop for a while --- the magnified image in the focus magnification window is decidedly less sharp in raw only. When I set the camera to full size Jpeg the magnified image is sharper. I worried about the sharpness when I first started shooting with manual lenses but when I got home and looked at them on a big monitor it was obvious that they were really great. When I set the camera to raw+jpeg I also get sharper magnified images (both in focus mag. and for general review). I conjecture that the camera writes smaller jpeg previews from the solo raw files to save on bandwidth. You have been forewarned.

After all of this, is the Contax lens sharp enough on the G85 or the GH5? Logic suggests that since it was designed for a bigger format and for film it might not resolve as well as current Olympus Pro super lenses around the same focal length. That may or may not be but the lens seems quite sharp and well behaved for me.

I've been shooting it at f1.7, f2.0 and f2.5 for a while and have gotten some great shots with nice detail and no fringing of any kind. Since the cost of these lenses ranges from $100 to $200 they seem like a bargain to me compared to newer lenses. But then again, I love to shoot portraits with them; your work might be something that requires ultimate detail and sharpness and I haven't done enough of that sort of work with the lens to toss out an opinion.

I do like the look of the lens. For grins I tried a couple of manual focus Nikon lenses I still have around the studio, along with an Fotodiox Nikon to micro four thirds adapter. I worked with the 55mm f2.8 macro, the 50mm f1.4 ais and the 105mm f2.5. None were anywhere near the sharpness I get wide open with the Contax lens. At f2.8 the Contax is an order of magnitude better than the Nikon 50 or 55.

How much do I like the actual look of the Contax lens for portraits? A lot. In fact, when I saw a used Contax 50mm f1.7 at Precision Camera recently I quickly convinced myself that I needed a second one as a back-up. And for the moment I'm using it in place of the Olympus 45mm f1.2 Pro that I'd eventually like to buy. But the Contax/Zeiss lens looks so good.......
Posted by Kirk, Photographer/Writer at 18:36

I also often don't need the EXIF info wither I and have a close enough approximate attitude about it. I am currently shooting a Sony NEX 7 with a Zeiss FE 82.5e mm. I often mount it with a Novaflex adapter for Sony e-mount of the camera and a Nikon Fmount lens end. Then with the Novaflex lens side for Nikon end, I mount it on to the Zeiss lens. It fits perfectly, but it just doesn't "click" for that locked connection feel. I used blue masking tape for a while, then I found one of those blue rubber bands for Asparagus. Now with the 1 ⅛ adapter as my extension tube, it is a nice Macro rig......and it looks cool !

I like using my oldish 50mm Summicron on the PenF - great results and it looks cool.
Do you have to dial in the focal length for the IBIS system on the Panasonic as you do on the Olympus ?

I agree that the Nikon 50mm f/1.4 AIS is not sharp wide open on M4/3. Mine has a soft dreamy look at 1.4. I think it’s mostly veiling flare rather than lack of resolution. In any case, it sharpens up enough for detailed work at f/5.6.

Michael, Yes, you have to select the focal length. On the Panasonic, if you have a manual lens on the camera when you turn it on the camera asks you if you want to keep the focal length setting or change it. No menu diving necessary. A nice feature. If you don't want to change it you can click "no" on the screen or just tap the shutter button to make the message vanish.

My Nikon Df only records the focal length of my non-chipped lenses in the EXIF. I use the LensTagger Lightroom plugin to add the remaining lens data.

I use the free exiftool (Windows, Mac) to put in some of the EXIF data when I use an adapted lens on my PEN-F. For example, here is the command to fill in some EXIF data for a couple of lenses (which I almost never use):

It is nice in Lightroom to have this EXIF data.

Thank you so much for the article in response to my question about the Contax. Looking at all the different options for adapting lenses to m43 was a bit overwhelming. Good to know I can begin with an inexpensive (yet still high quality) basic model as an entry into the world of adapted lenses. Great tip about turning on jpeg with raw for better magnified view, I would not have thought of that. I have been less than enthusiastic about the quality of magnified view up to this point so I will be grateful for the improvement. Now, to find my way around the EM1 menu to adjust all the required settings.