The Pared Down Video Rig. For those times when you must work hand held and want to travel light. 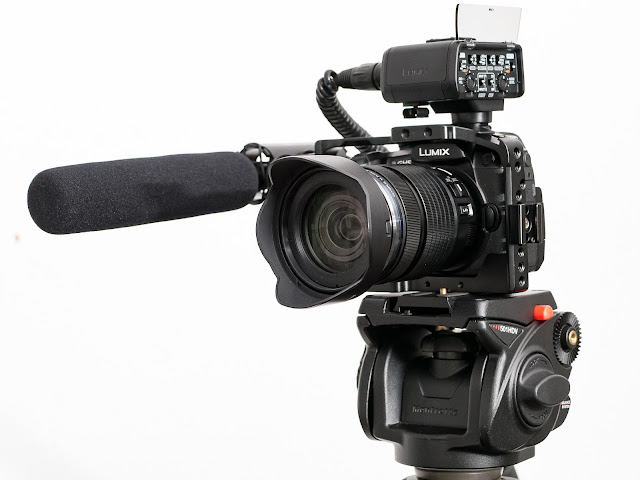 I recently worked on a project (as a second shooter and equipment renter) with a good friend who is a veteran videographer. While the project had one component that called for a three camera, two subject interview, with all three cameras on tripods and everything well lit, the rest of the project was classic reportage. We were tossed into unfamiliar interior and exterior locations and tasked with shooting unscripted documentations of diverse groups of people, along with on-the-spot, unrehearsed  interviews with people we were pulling from the locations.

It's one thing to shoot video when you have time to meticulously treat a room for good audio, and when you can spend a couple hours pre-lighting for an interview situation in a conference room, but it's a whole other thing to work on a windy day outdoors with difficult subjects (as well as people (non-subjects) in the vicinity who could have been dangerous and were very vocal about their distaste for any and all media presence) as the sun comes in and out of the clouds.

For me it was a two day crash course in how to most efficiently and effectively use a Panasonic GH5 as an ENG (electronic news gathering) camera.

Here's the rig (photo above) I've distilled down from my experience and the feedback of my boss, the director and producer (who was also shooting exclusively with a GH5...instead of his more familiar Sony FS-7).

The main thing is to work to the camera's strengths. This camera (GH5) does a couple of things really well. It's got great image stabilization (otherwise there's no way we could have gotten the smooth footage we did without tripods....). While it's very good at stabilizing the video image with any lens on the front it's even better with a Panasonic dual system AF lens on it. We used an Olympus 12-100mm on one camera and the inexpensive Panasonic 12-60mm  3.5-5.6 lens on the other camera. Both systems worked very well but the native Panasonic lens, in conjunction with the video stabilization in-body, was almost like using a perfectly balanced gimbal system.

I'm happy working with the Olympus Pro lens because I like how sharp it is, how much range it has and how easy it is to switch to, and use, manual focusing. If you are working in uncontrolled and quickly changing environments a lens that goes from the 35mm equivalent of 24mm to 200mm is great to have. In most situations I just didn't see how I would have had the time to change from one prime lens to a different prime lens...and still gotten some of the fast breaking opportunities.

The way I used the camera and lens combination most effectively (as far as focusing goes) is to turn off the "continuous AF" in the movie menu and to put the external camera switch setting at S-AF. I would line up a shot and then do a half push on the shutter button to get the camera swiftly lock in focus. Once I got the "in focus" confirmation light I could either push the shutter button all the way down or take my finger off the shutter button altogether and start the video recording by pushing the red, dedicated video button. Focusing was never an issue on this project. In S-AF, with center points selected, the AF just snapped into play and locked on in 100% of the situations I encountered.

Another strength of the GH5 is its small profile vis-a-vis a traditional professional video camera. We chose not to couple the cameras to Atomos external monitors/recorders (even though we did bring them along with us in the cars...) in order to keep the overall profile of the camera systems as non-intimidating as possible.

But losing the big monitors doesn't create much pain with the GH5s. The things you need in order to operate are still there: A perfect EVF and a full complement of video meters --- vector scope, waveform meter, histogram, audio level meters, etc. If we were working without the need to capture sound, as one might when trying to get b-roll for a project, we could have done without the audio adapter and the cage, but....

...the audio adapter is a low cost, high quality way to get professional sound into the camera. It's light and fairly low profile while providing clean pre-amps for professional microphones. My camera is set up with the adapter cabled to an Aputure Diety short shotgun microphone. The only thing missing from the photo above is a set of closed back headphones I use to monitor sound. With the switch of a cable I could have the microphone on a boom pole in less than a minute. Very versatile.

The final strength of the GH5 is its ability to shoot very, very clean 4K video into the camera at high bit and overall data rates. The stuff we ended up with was incredibly detailed and, using hand-tuned profiles, it was easy to color grade and match, camera to camera, in post.

Take the rig off the tripod, add a cool looking side grip to the left of the camera and you are ready to head onto the street, into a remote location, and have a chance at coming back with good material. In most instances I felt that I was the limiting factor. That's the way it should be..
Posted by Kirk Tuck, Photographer/Writer at 13:14

If some subjects were uncooperative or downright combative doesn’t that imply they’re being used against their will? As in without consent? That could lead to some pretty hairy consequences — for the client as well as yourself. Looks like an interesting topic.

I should have written that part better. We would only videotape people who give us consent but the situations were such that there were people who were hostile to any media presence in the close vicinity and they made their dissatisfaction known even though they were not the subject of our videotaping. We would not videotape an interview or an exchange without written consent. I'll circle back and fix that. Thanks for the nudge to clarify.

Kirk, it’s difficult to see from the photo but did you have any issues with the side-mounted mic creeping into the widest coverage?