I often hear that one has no real depth of field control with small sensor photographic files. I'm not sure that's right... 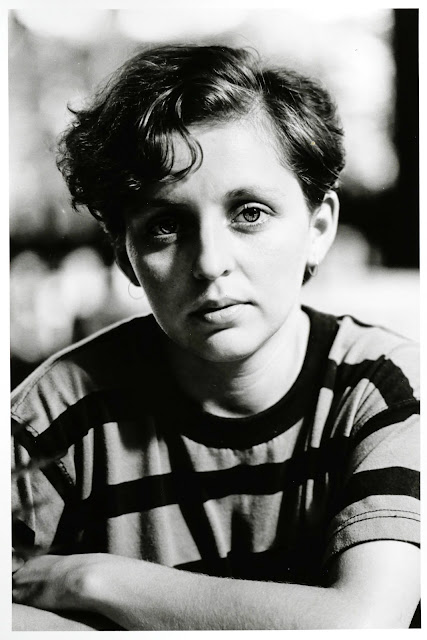 It was a typical Sunday morning back in the film days. Belinda and I headed down to West Sixth St. to have brunch at Sweetish Hill Restaurant. We sat on their lovely patio under a translucent awning and waited for our waiter to bring over the most addictive coffee I have ever known.

As has been my habit for well over thirty years I had a small camera dangling off my left shoulder, just in case I saw something that wanted to be photographed. I was running an advertising agency back then so there were no external constraints on which cameras I carried. On that day it was a small, black Olympus Pen FT half frame camera, loaded with Ilford FP4 film and sporting a smart little 40mm f1.4 lens. The same one I own and use now.

I liked the way the light came through the awning so I pulled my camera up, adjusted the exposure from experience (the meter in the camera had long been non-functional) and shot two or three frames at f2.0.

The dim finder of that camera (ancient even back then) coupled with the greater depth of field of the frame area meant that focusing was at it's best with the lens wide open, or nearly so.

I have printed this image onto 11x14 inch paper many, many times in an attempt to get it just right. This is a copy image of a fiber based print that I made sometime in the 1990's. The FP4 film contributes to the higher contrast of the photograph but at the same time it keeps film grain (analog noise?) to a minimum.

The film frame is hardly any bigger than today's micro four/thirds sensors but the lens does a good job carving out lots of detail while delivering good contrast.

To my eye the background areas are well out of focus and have a pleasing out of focus characteristic to them.

I couldn't have gotten a "better" image with any other camera. I might have gotten a different image; a sharper image, a more detailed image, an image with more dynamic range, etc. but this is the image I ended up with and have come to love over the years. As long as my subject matter is highly captivating to me no other metric or feature of photography matters.

The Pen F series of film, half-frame cameras of the late 1960's and 1970's were the precursors to a whole niche of current cameras. They are no less valid now than the Pen FT was to me back in the 1980's.

I never made a habit of dragging around a Hasselblad or motorized Nikon f4 when we were heading out to have a nice meal, just as I would never take a cellphone into a nice (or any) restaurant today. A small and sleek camera is acceptable, a giant, noisy power tool is out of place. And a ringing phone or a loud and loutish conversation is never welcome.

Posted by Kirk Tuck, Photographer/Writer at 15:33

Kirk, Everytime you post an archived photo of your beloved I'm speechless. The combination is stunning. Agreed film for B&W is still the winner.
ted

Hi Kirk, while you're checking out the Sony RX100 take a look at the Panasonic LX100.

Any camera with X100 in the name has to be good.

My two carry around cameras are the Panasonic LX7 or the Panasonic GX1 with the 20mm f1.7 lens mounted. Even with the small sensor in the LX7 the images are outstanding. The Leica zoom on it really shines. Another plus of the LX7 is that it is truly a pocket camera.

Our friends at dpreview say this about the LX7 "Overall, the Panasonic Lumix DMC-LX7 is an excellent premium compact camera. Its fast lens, performance, and manual controls will make enthusiasts drool, while those just starting out can get great results using Panasonic's Intelligent Auto mode. There's very little to dislike about the LX7". If you can pick one up used you will get a great camera at a bargain price.

I'm with you on the cellphone in restaurants. Civility is a rate commodity these days.

Get yourself a GX85 and a 20mm f1.7 lens and you're set. The guts are the same as the G85, so image quality is identical. It'll fit in a big pocket and that lens is sweet. It's my carry everywhere combo that does not compromise in any way. If you want some range in a small package, add the 42.5 f1.7 and the Olympus 12mm f2.0, and the possibilities are endless.

I still miss my Pen FT. Sweet, sweet little camera. A few weeks back I ran across a box of prints, photos done with it at a family gathering. It really did nice work.

I don't suppose anything digital is quite the same -- too many knobs, too many buttons, too many modes and menus and such. Too may distractions from the basic task of picture making. One digital I do enjoy is my little Panasonic GX1, usually with the 14mm lens, usually with the accessory finder but sometimes without. And I can be pretty happy with my GX8, though it reminds me more of an M3 Leica -- which is what I moved to after the Pen.

Just to be clear, I'm not one of the ones asking for some kind of simplified nostalgia-trip digital -- I wouldn't buy it if they made one. The old days were great, but that was then and this is now.

+1 to both frank and mike. have both those combos. The 2 combos i use the most in my everyday shooting:)

Yes the Sony RX100. Still have and use the original version. Used it this past weekend at a family dinner. Got some images I'm really happy with. I've made large prints from the same camera, a couple of which are hanging in my wife's office at work. It's my most used camera of 2017 and probably 2016. I really have a thing for small cameras, I just love them, going back to the film days and the Olympus mju-ii clam shell camera that fits in the palm of my hand just like the Sony.

Marvelous photo of a most beautiful person. I can remember when art directors thought it trendy to make stats of high contrast B&W pictures to drop out all the intermediate tones, reaching for a heightened visual impact. If they’d seen this they would have known there is a better way.

RX100 is a great anywhere camera. I leave mine in my briefcase/computer bag or in a small belt case when I am traveling and want a real camera without the bother of a real camera. As you know from your work with 1" sensors, the images are great.