A production photo of Brianna Brooks at "Belle" the Zach Theatre's Production of "Beauty and the Beast." Now, if I can only remember which camera and lens I used to get this one..... 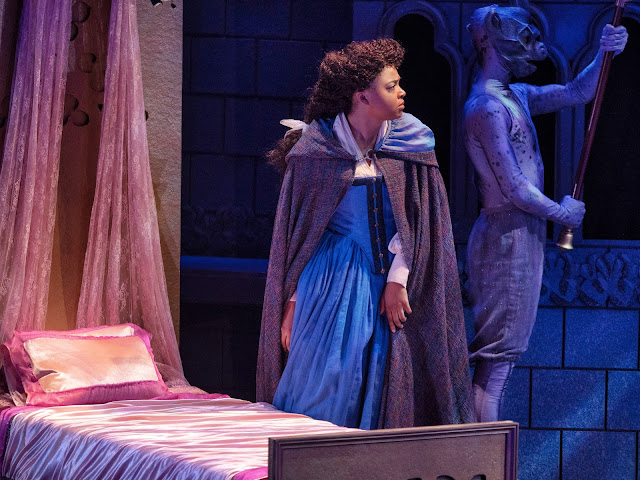 Belle at the Castle of the Beast.

I made it sound like I was on pins and needles this week when shooting the photos for "Beauty and the Beast at Zach Theatre. Yeah, I did two different shoots and also attended a non-photographic run through as an exercise in scouting; but the truth is that I enjoyed every minute of it. I've been shooting marketing images at show rehearsals for decades and I guess I've done it well enough so that each new marketing director doesn't come in and try to "manage" me, or give me shot lists, or tell me how to shoot the photographs. Instead they tell me when the curtain will be going up on a rehearsal and they tell me when they'd like to get the final images. With an open ended mission and a bag full of cameras and lenses to play with --- what's not to love?

I shot at the play for as many days as it took to get the shots that I wanted to see. That's how it works.

I don't shoot like you shoot, my computer tells me I have shot something like 2,000 frames in 2018 more or less. But I *am* pleased to report that exactly zero of those were tests.

Vast swathes of the photography internet appears to be devoted beginners, and people who wish to remain beginners.

I'm no BEGINNER. If my pictures are lacking, it is because I am BAD, not NEW!

Sorry to see you trimmed the rest of this post. I hope you re-post it.

Sorry Dave, I woke up this morning, read it and it sounded too preachy. I like it fine short.

Too bad, Kirk. I had it marked for a chapter in the new book "Kirk Tuck on the Art and Practice of Professional Photography" (which will likely never see the light of day, but it would easily have been the best of its genre).

I should have copied and saved it while it was up.