In Praise of the All Purpose Lens for most Commercial Work. Video or Still. 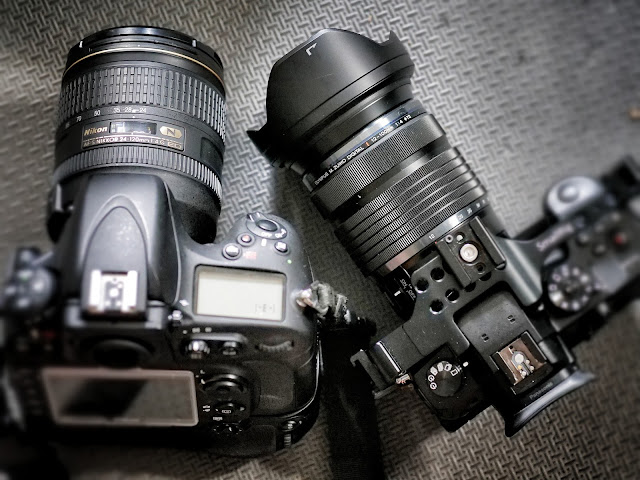 The two lenses I used today to complete a job that required stills and video.

I'm always impressed by the delusional pursuit of perfect lenses. There is a power in the process that is capable of sucking money out of my bank account faster and more frequently than any other part of my expensive photography habit. I recently acquired a Sigma 50mm f1.4 Art lens. It's spectacular. You'd think I would use it for everything but it's only been out for a few walks and it's been toted along but unused on a handful of assignments where I imagined that it might make a critical difference in ..... something pertaining to my work but it ended up staying in the bag and mostly just taking up space.

Over the years I've made the same kinds of errors in critical thinking over and over again. The acquisitive/rationalizing part of my brain tells me that the ultimate lenses will help me make much better photographs. It persuades me that all my clients will see and appreciate the difference that an ultra-cool-expensive-flashy-fast lens will make in the work I do for them. And I follow that bad part of my brain and rush to the store or to my computer keyboard and throw caution to the wind in my breathless desire to own the best. Almost without exception the most prestigious lenses I ever buy inevitably get sold off a while later. Always at a loss that exceeds any sort of depreciation.

I think my least wise purchases over the course of my career were the purchase of a brand new 80mm Leica R Summilux 1.4 for my (also bad choice) Leica R8 system. There was nothing wrong with the lens. In fact, it was really, really sharp, had flawless bokeh (I measured it on the same brand of Bokeh-Meter used by the savants at DP Review -- It was a 9.5 on the Kroniform Thyquisty Coefficient of Wunderblur. Beaten only by a Lens Baby...) but the cold hard reality was that 80mm is a shitty focal length for me and I should have known better before casually tossing down north of $2500 for a lens I used maybe three times and liked maybe once.

The second was an Olympus 14-35mm f2.0 zoom that was made for the now deceased Four Thirds system. It was supposed to be a beautiful lens. It was $2200. I could never get it to focus on the sensor plane. It loved the space behind the sensor and enjoyed the space in front of the sensor but it plainly reviled the actual focal plane of any Olympus camera I ever owned. I even