"Why does that photographer shoot so many images of each scene???? He must get paid by the frame." 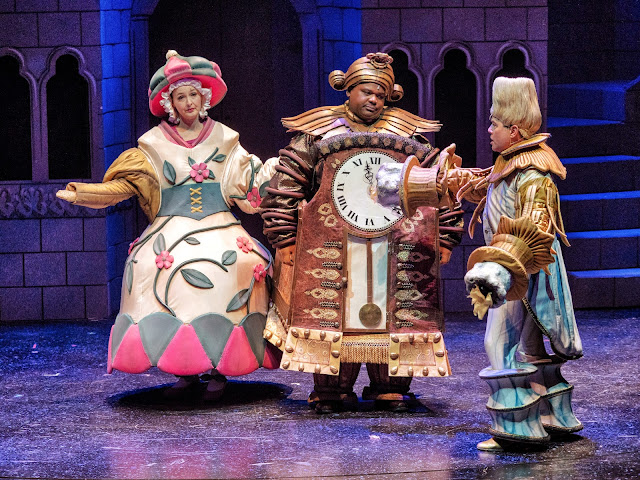 A photograph from the opening night show of "The Beauty and the Beast" at Zach Theatre. With Meredith McCall, John Christopher and Martin Burke. Photographed with a Panasonic GH5 and the very nice Olympus 40-150mm f2.8 Pro series lens. Get one. They're great!!! Sorry no affiliate link for you...

It always comes up. "Why do you shoot so many frames?"

I'll look at the results of a photo shoot; either a portrait session or a dress rehearsal, and I will have shot something like 100+ images for a "simple" (no such thing) portrait or somewhere north of a 1,000+  images for a two hour dress rehearsal of a live theater production. That's a lot of frames!

I've watched other photographers work hard and with much gnashing of teeth shoot ten for a portrait and a couple hundred for a live performance. Am I just stupid or am I a gluten for editing punishment?

I'll give myself the benefit of the doubt and toss out a rationale based on my personal experiences.

In making a portrait rapport with the sitter builds as you spend time together. There's a rhythm to the shooting; a cadence almost, and it takes most sitters some time to accept it and then, ultimately ignore it as they become more and more comfortable with the whole process of being photographed in a studio. In most cases we could probably toss the first dozen or two images and be pretty confident that the best stuff will come around the 2/3rds point in the session.

In addition to the "warm up" frames there is also the question of micro-expressions; little changes in expression that are more telling than one might at first believe. Little things like tension around a subject's mouth or eyes, a smile that's forced. If you see these things shooting more frames gives you time to re-direct conversation or direction and head into a different look. And, as I suggest, sitters get more comfortable over time --- if you engage them genuinely and with good intention.

After we get things happy and calm I might see and expression or gesture+expression that I really like and then we shoot more frames while we fine tune all the details, from the way hair falls to the way a collar sits on someone's neck, all the while working back to that great expression/gesture. It takes frames and a certain amount of trial and review to get things where you probably want them.

Once you have some really good frames the last 20% of the shoot is spent seeing if there is any way to improve the work and get even better frames. It's easy to see how you could get to 100 or more images in twenty minutes or so of working with a portrait sitter.

Yes, if you only took 12 you might get a useable frame but would it be a good frame? Would it be a photograph that both you and the sitter would be proud to share? The numbers are your friend in this case. You can throw away all your mistakes in the editing phase but the big mistake is to not have taken the great image in the first place, constrained by your own overly frugal regards for digital frames....

But what about show photos? Well, you are still looking for the perfect expressions but as in the image above we now have more parts in motion. We have three people, all moving, all expressing all doing their parts. In a world in which I would have absolute and complete control, an endless budget and infinite patience I would photograph each actor individually and with every variation of pose and gesture I could think of and then I would select the best frame of each actor and drop them into a master frame.

But that's not the reality of theater photography. You don't have unlimited access to actors. You don't have infinite budget for retouching and compositing and the theater probably wouldn't want that service if you could provide it. They value authenticity over perfection.

So we overshoot each scene so that we can be reasonably sure that there will be at least one frame in which everyone looks great, has their eyes open, is turned in just the right direction and in which the photographer has nailed composition, focus and exposure. Oh, and good handholding technique. As weird as it may sound your "perfect" selection ratio might be one really good and usable photograph out of a series of 50 or 60 that don't really make it.

With theater you also have to add in the reality that this may be the first time you've seen the productions and have no idea what comes just after the shot you thought was going to be the ultimate keeper. I keep shooting because I don't want to stop only to find the very next second or minute or whatever holds an even better version of the frame I just shot. We can always trash the frames that don't work but we can never get frames we lost by assuming we'd already hit the peak of action only to take our eyes off the prize just as it turned to gold. A little extra shooting and a little extra editing is the price we pay for looking for the potentially great shot in a sea of adequate shots.

And that's why I shoot so many frames.

One last thing. I may be partial to a certain look or gesture or expression but I try to shoot beyond my preferences because clients may have different tastes, points of view, or understandings about what constitutes a great image for their marketing efforts. In a very real way I'm shooting get stuff for me and for them even if the stuff in question is shot in two different ways. At least, if I overshoot, more of us will be happy with the final choices we get to make.

If I were shooting still life stuff to a tight comp we could probably get the shot in three frames....and two of those would just be safeties...

On a different topic (kinda): I wish Olympus made lenses for other camera makers. I love my m4:3 cameras partly because the two Olympus Pro lenses I use are so darn good. But I'd love to have them make a 25-125mm f4.0 lens for full frame Nikons and Sonys because I'm almost certain they'd blow the doors off what the big boys put on the market. And I know their image stabilization would also rock. Ever thought about what would happen if every photography player just played to their strengths? The lens I described just above with Nikon or Canon color science and Sony mirrorless tech? We couldn't even use a system like that. It would be too good for most uses. We'd end up crying over the lost potential........

Maybe it's just the heat talking...
Posted by Kirk, Photographer/Writer at 15:19 14 comments: