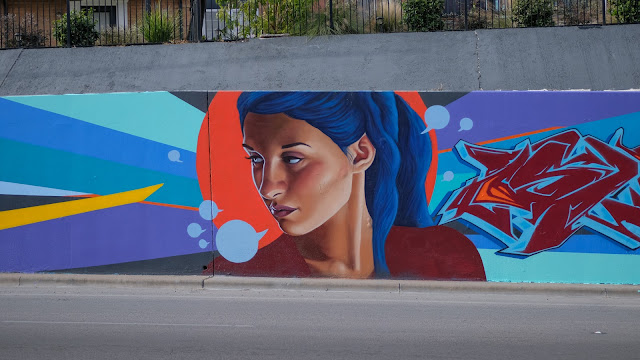 I bought Ben some new headlights for his car. They were a Christmas present. Part of the gift was that I would have them installed. I don't personally do anything with automobile maintenance other than find dealers who have barristas and who also serve pastries while you use their high speed wi-fi in their nice waiting rooms. I prefer even more the ones who automatically give you a loaner car while they work on yours. But when it comes to maintaining a 15 year old Toyota Corolla those sorts of dealerships and perks are a bit of a mis-match.

Belinda had been having her car (now Ben's car) serviced by a local place called "Rising Sun Automotive." They specialize in Japanese cars and are knowledgable, laid back and fair on pricing. I called and they said they'd be happy to install the headlights. I arranged to get the car in last Thursday. Ben was flying to San Francisco for a few days for a business meeting and, if I took him to the airport at five in the morning I'd be able to take his car over to the shop in his absence.

I drove the car over after morning swim practice. Belinda was at work at the ad agency downtown by then. I decided to drop off the car, walk down Lamar Blvd for about a quarter mile and then catch the bus back to my neighborhood. As I walked down the big hill on S. Lamar I came upon a giant mural painted on the retaining wall across the street from me. I had the XT3 with the Fuji 50mm f2.0 WR lens on it which was just the right combination. I shot a few frames and then walked on; not wanting to miss my bus.

When I got back to the office I popped the memory card into my computer and pulled up the wall/mural image in Lightroom. The color and resolution were flawless. When I pulled up a detail of the eyes from the mural I was happy because I could see all the surface texture on the wall. 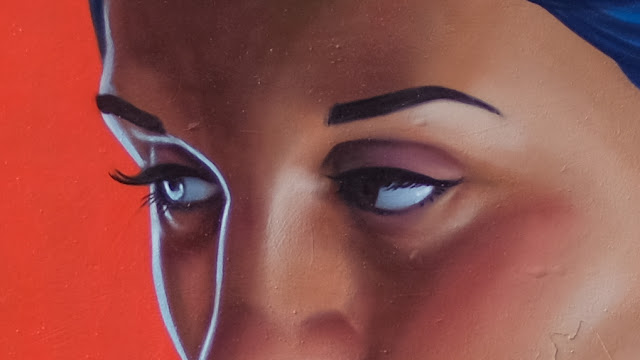 I've subsequently shot a number of different subjects with the 50mm lens (which is small and light) and in each instance I've been happy with its performance. I can't ask more of a long normal/short tele lens that is both economical and also weather resistant. I recommend it!

Then I went for a walk and shot some stuff with the &Artisans 55mm f1.4. Below is an image of a plant that I photographed at f2.0 and I liked it as well. Other photographs of flatter subjects show me that the lens is soft on the edges when used wide open but gets better edge sharpness as you stop down. At f2.8 and higher I'm able to use the lens interchangeably with any of the Fuji lenses and, while it's not quite in the same class when it comes to sharpness and performance at wider f-stops it's a great lens for portrait work if you keep the subject away from the edges. It's much superior, image-wise compared to the more expensive Kamlan 50mm f1.1. I'm not in any rush to move the 7Artisans lens out the door. I'll want to spend more time with it shooting portraits in black and white before I make any hasty decisions. I'll give this one a neutral rating. The price is right but some will have issue with edges and corners. It does have the latest photo buzzword: Character. (which largely means it's less sharp than ultra modern lenses and perhaps the lens coating flattens out harsh detail on portraits better than the best coatings. Let's call that a plus for portraits; a minus for other subject matter...... 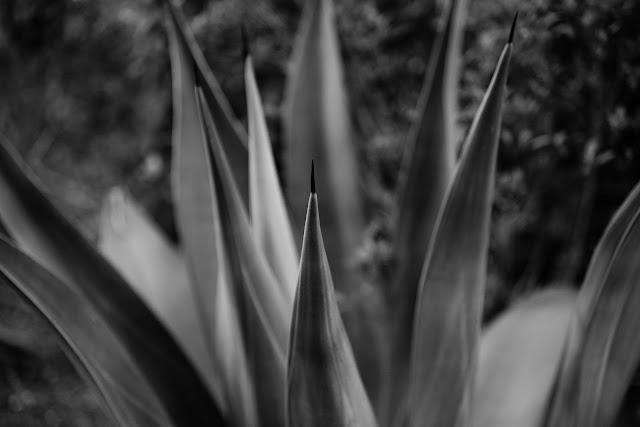 And that brings me to the lens I took out for a stroll this afternoon. The Fuji 90mm f2.0. Based on what I saw after shooting about 60 photographs I would recommend that every Fuji user who makes portraits, and likes a longer focal length for a tighter angle of view, should run out right now and buy their own copy of this lens sometime between now and the end of March while there is a $250 rebate on it. It's that good. I'm officially smitten.

There are really just three lenses I've used in the past two years that have surprised me with their near perfection. Of course, the first one is the Olympus 12-100mm f4.0 Pro. I can't understand why any m4:3 user would not have this amazing and highly flexible optical system in their camera bag. It's just so good. And the built in image stabilization works so well on Panasonic cameras that most would not miss having I.S. in body if this lens was their primary shooting tool.

The second lens is the Olympus 40-150mm f2.8 Pro. Fast, super sharp, easy to handhold, and did I mention sharp wide open? I thought I'd have to rummage through the Olympus catalog any time I needed a superlative lens but the 90mm f2.0 from Fuji is their equal. It's sharp wide open, the out of focus areas behind the main subject are sublime and while the lens is hefty you know it's that way because it's packed with optical magic. No I.S. but so usable on the XH1 with in-body I.S.

If I hadn't experienced the lens first hand I wouldn't believe what I had construed to be hyperbole. I do now. It's the best of the lenses I've used on my Fuji cameras. 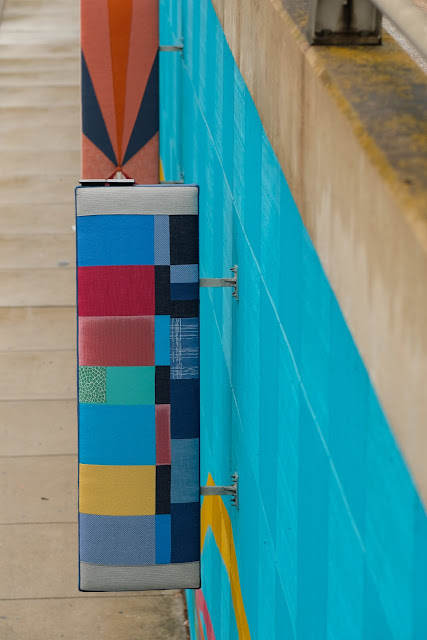 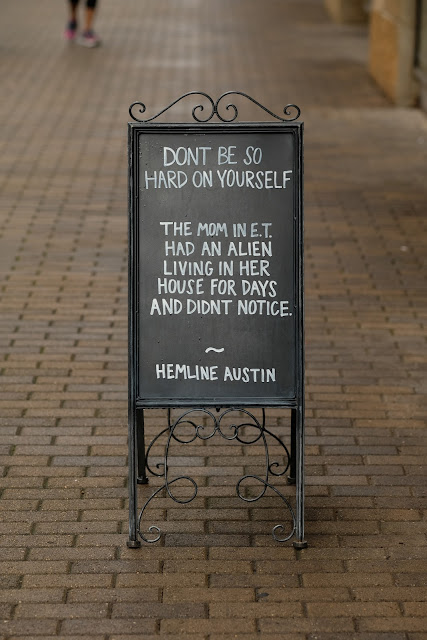 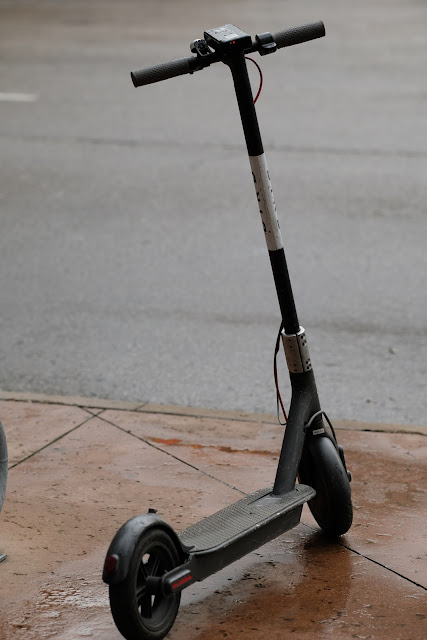 Today I was inspired to look all over downtown Austin, Texas to see how the landscape has been littered with rental bikes, scooters, mopeds and electric bikes. These are shots from my adventure. 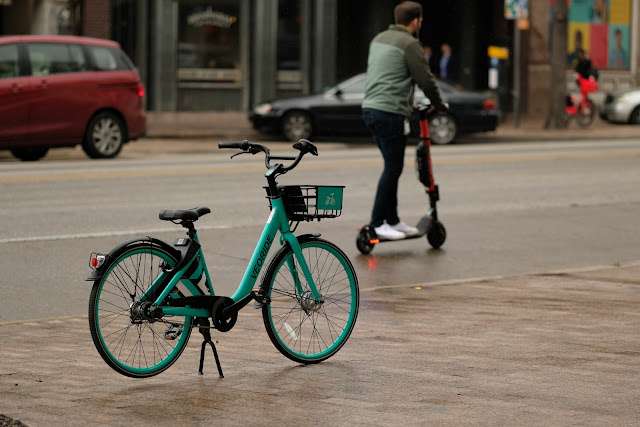 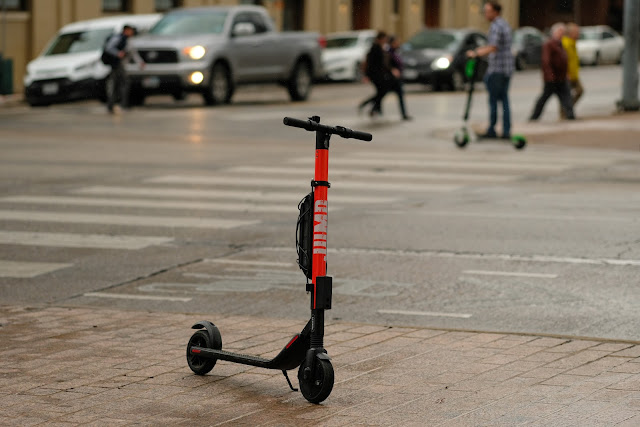 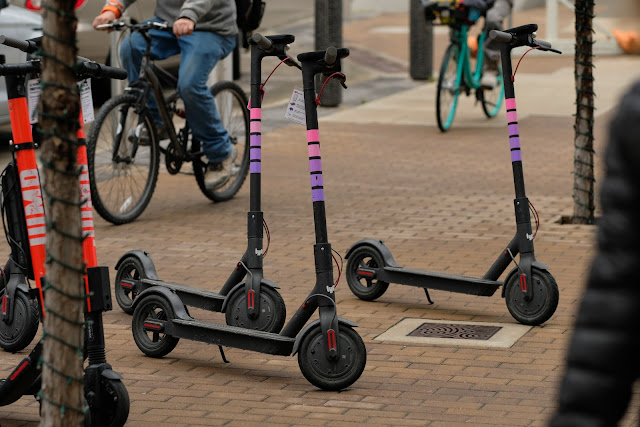 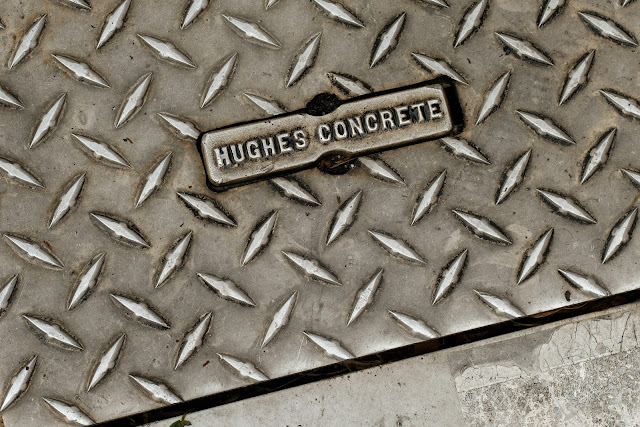 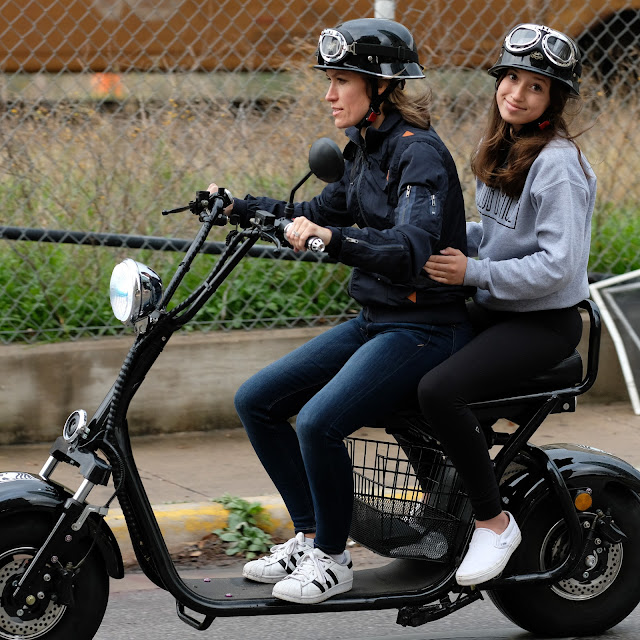 Posted by Kirk Tuck, Photographer/Writer at 20:37

landscape has been littered with motor vehicles taking up swathes of city areas for far too long.

And all this Fuji goodness will be chucked out for the new Panasonic S1R or S1. Looks like an awesome video machine! Can't wait for Chris and Jordan to review it. Or maybe Mr. Tuck himself ;)

Well, for the money Fuji wants for that 90mm it'd better be that good, don't you think. Compared to similar focal lenghts and max aperture from Canikny this is 40 to 150% more expensive. Now, a gorgeous but affordable lens, that would be real news.

Hendrik, Since I think this lens is every bit the equal to the best Leica lenses I've used. Have you priced a 90mm Apo-Summicron lately? 😄

Kirk how do you find the focussing speed on the 90mm? I mentioned in an earlier post that, after buying a copy when it was first released a few years ago, it was slow to focus on my x-t1. I sold it. Possibly with new firmware/bodies the focus speed has dramatically improved over the years? (I’m now shooting with an x-pro2).

Max from Down Under

It's a lovely lens Kirk. I shot it side by side on an xt2 and the 75mm f1.8 from Olympus on the em1.2. I took a behind the scenes with it while jey was shooting with her cellphone and the resulting jpeg was just lovely.

Looks like you are having a ball with the Fuji stuff :) I am enjoying your experiments!

hello!,I like your writing very a lot! share we communicate more about your
post on AOL? I require an expert in this house to solve my problem.
Maybe that is you! Looking ahead to look you.

And the wrestle for the Iron Throne begins.