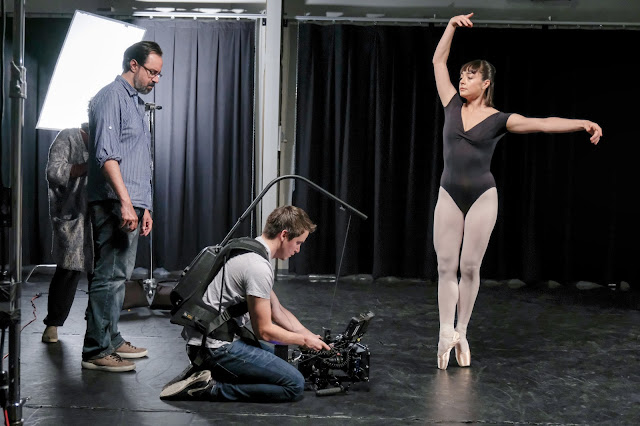 A production photograph from a video shoot at Zach Theatre. Videographer, Jake Fordyce, (center) is shooting with a rigged out Sony FS-5 (extra heavy duty batteries, follow focus gear, and an Atomos monitor) which is...weighty. The thing strapped to his back makes a four or five hour shoot bearable...

Those video guys are pretty ingenious. The device being used by the camera operator (above) is called an, Easy-Rig. It's a backpack with support belt and extra strength connections which support the strong metal bar you see running up over his head and ending up above his head and about a foot in front of him. At the front termination of the bar is a cable (capable of adjusting closer or further from Jake's face) that reaches down and supports the weight of the camera and its accessories. This adds a lot of stability to the handheld camera and keeps the operator from having to support all the weight with his arms. I watched Jake work with the Easy-Rig and it seems like the right compromise for a lot of shooting. It's more controllable than most gimbals and seems to require less experience to use. I can also be used in conjunction with in lens or in body image stabilization. At the same time the Easy-Rig allows more fluid movement than any tripod or monopod.

I've been playing around with gimbals for video and find them fussy and hard to control. I'm a much bigger fan of "dumb" shoulder mounts, monopods (with or without feet) and, of course, tripods. But I wonder if some enterprising company might realize that sports photographers, and some other specialist photographers, spend a lot of time holding heavy gear up in front of their faces in a handheld fashion and might benefit from a device that suspends the camera right in front of them while supporting the weight of the camera and lens with a system that transfers that weight to the hips and body's core.

I'm sure it would look a bit "dorky" for photographers but if it worked to make camera handling more comfortable and at the same time more stable I'm sure a fair number would give it a try; especially those who frequently work on sets and in other controlled environments. Yeah. I think it would be embarrassing to see a street photographer in one of these rigs but it might be just what the doctor ordered for a guy shooting a football game with a 300mm f2.8 and a big-ass camera body...

I want to thank everyone who wrote to offer condolences and other good thoughts in connection with the recent passing of my father. I enjoyed reading them all. It made a difference to me that you all cared enough to write and share.

I've been busy since I wrote that post about my father; I've made funeral arrangements, closed out accounts, cleaned out his room at the memory care facility (with the help of my older brother...) and have had two phone conferences with my family law attorneys. I've pretty much done all I can do for right now since just about everything surrounding the disposition of his estate requires either/and/or a death certificate and letters testamentary.

For the first time in at least two years I feel unconstrained by the familial responsibility to be "on call" and also to not venture away from contact and proximity for more than a work week at a time. I can now check in with my close "nuclear" family and then head out for a road trip or a flight to someplace more exotic than Austin, and spend time both in transit and away from home. It's odd to feel the weight of "availability" lift off one's shoulders.

Many have written about their grief. I rarely hear anyone say (out loud) that a family member's passing is accompanied also by a sense of relief. Relief from the schedule restrictions and restraints, yes, but also a relief from the long term and incremental drip of grief and sadness that must accompany anyone sharing a loved one's accelerating mental and physical decline. And one understands, on some level, that the person "departing" is also enjoying a sense of relief. In a moment all responsibility is removed, all expectations evaporate and someone else picks up where they left off.

While we photographers are sometimes the record keepers and curators of our families, by dint of creating and housing a visual archive, I think it's important not become a museum curator for your parent's memory since that pushes you to constantly live in and re-live the past. While the photos are bittersweet reminders of people who have gone ahead of you it's important to remember that all of these things that happened to you and your family are now in the past and your life is best lived in the moment in this day with an eye to the future; and a plan to make your every day from now forward count. No parent would want their child moored to one spot in the continuum instead of constantly experiencing the joys of life right now.

It's been an interesting experience for me, to be there for my father. But while many have suggested I somehow sacrificed a bit I would say that just as children teach us patience and kindness the elders teach us the value of this life. This moment.

Walk out the door and live. It's our best gift to and from ourselves.
Posted by Kirk, Photographer/Writer at 17:44

As usual, well expressed, Kirk. My family rotated “shifts” for three years to care for my mother, who passed away at 99. It was, at times, tough duty and her passing was accompanied by the sense of relief you speak of. Very much looking forward to seeing your photographs and reading of your farther afield adventures. - ChrisK

Hi Kirk,
I just read todays blog notes and was so touched by the compassion and common sense of what you wrote about memories and the responsibility to move forward. Keep up your posts, the hands on experience that you offer is very much appreciated and so easy to relate to as a now retired news and corporate photographer.

Dear Kirk; i m one of your biggest fans... at least on the DPR m4/3 forum (-: Have read u and hardly missed a post for - i guess - 6 yrs or so. !st, thanks for the journey. U have shared so many interesting things about cameras i too had bought (Lumix, Oly, Nikon, Sony). And as a bonus u have been a good "friend" sort of. I totally identify w/ the mix of feelings u are feeling re your dad. My parents passed away not too long ago in their 90's. May God continue to bless and your immediate family!
I suggest a California trip. You can skip SoCal. Fly into SF and drive PCHwy south through Monterrey/Carmel. (this was AA's fav coastal spot) Beware the summer fog which afflicts the coast along the upper half of the state. For that reason I would recommend winter actually. If the coast is foggy spend extra time in Nappa Valley. Drive across the Mts at Lake Tahoe, then down the East side to the Mammoth Mt area (back side of Yosemite). Then across again (inside the park). The hi country/Tuolumne meadows is less crowded ... but u really need to see Y Valley. Then back to SF... if it isn't foggy, u can drive north on PCH through Big Sur. All the best Kirk

Your fearless dedication to honesty in all areas of life is exemplary. You make it seem fearless, but I suspect there is always the slight internal cringe when putting your heart out on the oh-so-kind and generous Web. :)

You are much appreciated.

Regarding the blog note: well stated as always. The sense of relief is there for involved. A recent death in our family made this quite evident. You are spot on the lesson a death can teach - live in the moment, love the ones you hold dear and tell them that every day.

"Steadify" is a simple support system using a short adjustable rod with a lens cradle at one end and swivel-mounted at the base to a padded waist belt. Sounds a lot like your suggestion for directing the weight to the hips and core. It's made by Swift Tools, a father and son company who crowd-funded the device, now sold through B&H.
https://swifttools.pro/
https://www.bhphotovideo.com/c/product/1245624-REG/steadify_hjsy_steadify_1_steadify.html

One of the hardest-working motorsports photographers I know of, Bryan J. Nelson, has for years used a similar, self-made support to hold his Canon howitzers. I've not had a close-up look but it seems to be the same design concept: a heavy monopod resting in a belt-mounted pocket (like a flag-bearer uses) with a monopod tilt head (not a ball) mounted to the lens foot (tried to attach a photo of his in use, but... let me know if you are interested in seeing a photo). Much more mobile than a standard monopod.