We're back from vacation and too relaxed. But my camera and lens choices were right on the money and perfect for the kind of casual photography we were both doing.... 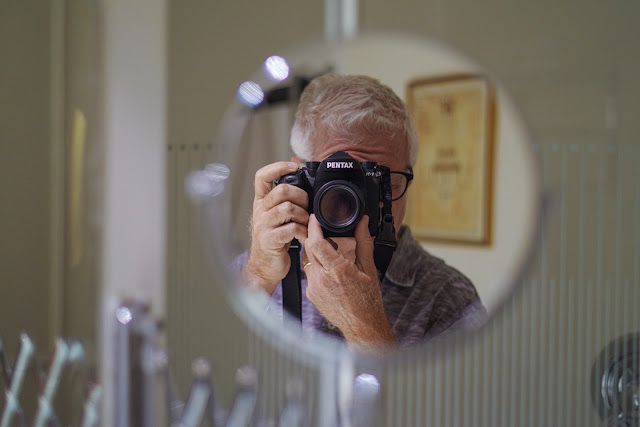 It was time to take a vacation. You know it's time when your friends and even some of your creative partners start hinting that you need to take a break. Belinda and I had always wanted to see Montreal and we were getting tired of the endless heat wave here in Austin so we made that our destination for this last week's vacation. It wasn't a long one like those crafty Europeans are able to take but it wasn't one of those American Executive vacations spent checking work e-mails, texts and phone messages around the clock either. We took our phones but mostly used mine to check out restaurant reviews and to see what time museums opened or closed. We did not bring along iPads or laptops. Our whole plan was to leave work behind for a while and just learn about some place new.

I wrote too much before leaving about my deliberations over which camera (or camera system) to bring along. I shouldn't have bothered to think about it since any of the cameras I own would have done absolutely fine. But I will say that going "old school" with the Pentax K1, a traditional 50mm f1.4 and a flexible, but not fancy, variable aperture, standard zoom felt just right. I was really happy with the way it worked and the way it felt as I walked around. Funny thing I was thinking about while watching other tourists shooting in the squares, churches and museums; there were some people using mirrorless cameras of various brands the bodies of which were much smaller and lighter than my K-1, BUT the folks attached to these cameras were many times dragging bags around with a whole selection of professional quality lenses, which added easily five times the weight of my "one camera/one lens" approach.

I hewed to a simple plan; if we were going to be outdoors all day long I'd grab the zoom lens and use it for everything, leaving the 50mm in the room. Without a second lens there was no need for a camera bag and no attachment to the idea of just bringing along a few accessories. If we were heading out to see museums, churches, or evening stuff I'd take the 50mm and leave the zoom in the room. If stuff didn't fit in the pockets of my jacket it didn't go out with us. The benefit, at least to me, is that my brain adapts to the limitations at hand and starts looking for equipment appropriate subject matter.

Belinda tends to be camera resistant, personally, but I thought she might want to take some photographs along the way so I did think long and hard about the best camera for her. She is smaller and has small hands. She hates to carry stuff around. She's a professional art director who works with photograph on a continual basis at work but has less interest in doing photography as her primary mode of creative expression. I finally offered up a Canon G15 point and shoot which she decided was a really good travel camera. She shot around 150 images with the Canon and was still working on the first battery when we headed back home. The one thing that was a bit disconcerting for her was the realization that the G15's finder showed only about 80% of the image instead of the 100% she could see on the back screen. Being a picky art director that realization marked the last time she used the finder, depending instead on the dirty baby diaper hold for the rest of the trip (that's the method of holding in which the camera operator holds the camera out in front of themselves with both hands. Far from the face. Like you might hold a really smelly baby diaper).... I did not offer criticism or commentary of her technique (and this may be why I have been successfully married for 34 years and counting).

So, all this talk of cameras aside, how did we like Montreal, Canada? OMG. The first thing that stood out to both Belinda and me was how wonderfully kind, patient and helpful the Canadians we encountered were. We come from Austin, Texas which, in the USA at any rate, is considered to have some of the nicest and warmest people in the country. No comparison to the people we interfaced with in Montreal. They have us beat by about 50% when it comes to calm, quiet, niceness. And, NO, being nice or kind is not a weakness.

My favorite interaction was in the Metro. We decided it would be most efficient and cost effective to buy three day Metro passes so we found a Metro stop and went looking for them. We asked at a staffed kiosk and the man inside pointed out a machine over to one side of the station. We could get Metro passes there with our credit cards but the kiosks only took cash. We decided to use the machine. We were tentative. It's new to us. Seeing our momentary hesitation the Metro employee left his enclosure and came over to walk us through the process. He answered all our questions and then showed us exactly how to use the cards. After which he welcomed us to Montreal warmly and sped us on our way. He could not have been nicer. I've bought subway passes in NYC, London, Paris, Rome and several other big cities and in many of these location the goal of the people manning the subterranean booths seems to be to provide maximum discomfort to their victims/customers. Not so in Canada. Five more minutes and I felt like our Metro guy might invite us to his house for lunch. But in a nice way. Not a creepy way....

We stayed in a wonderful hotel in the old town. It's a great and very touristic neighborhood. If you fear using your camera to take street photographs you might want to head here to practice since the people in the crowds are all taking photographs of each other, of all the fabulous, old building facades, the other tourists and much more. In some crowded squares, such as in front of the cathedral in the old town, it's a veritable sea of Canon and Nikon DSLRs; many with pricy, professional lenses. While there were many more standard  DSLR-style cameras than I've seen recently in Austin or San Antonio there was the usual mass of cellphones working overtime as cameras, as well as iPads of all sizes being held up in the air, perpendicular to the ground, taking photographs and video. If you have any hesitation about using your camera to photograph strangers just know that the old town in Montreal is the perfect, non-confrontational, starter zone for nascent street photographer aspirants.

We loved the weather. It was in the mid- 40's to upper 50's each day and we only had rain (sporadically) on one day. That counts as perfect weather for two Texans coming from a hundred day run of hundred degree temperatures.

I'll have a lot more to say in the days to come but I wanted to end by mentioning that we had a most auspicious start to our stay in Montreal when we checked into our suite at L Hotel Montreal. The hotel was started by Georges Marciano (fashion designer) and every room in the hotel is filled with beautiful, mostly modern, art. Actual art. Not reproductions but real Andy Warhols, real Robert Indianas and so much more.

On the wardrobe in our bedroom there was a photograph of Audrey Hepburn. It was so welcoming and lovely. I just had to photograph it.

Downsides to the trip? Problems to overcome? Obstacles? None. Just none. Ready for a break from the local madness? Head to Montreal. If it's cold go to my favorite new coffee shop. I'll start with that tomorrow. 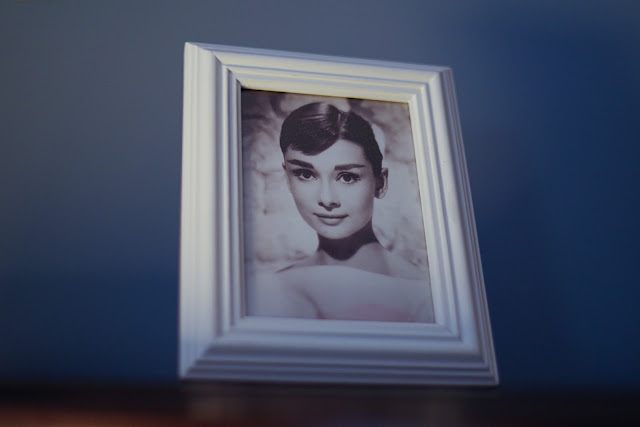 We're back!
Posted by Kirk, Photographer/Writer at 15:01

Thanks Frank. It's good to be home but the vacation was great. Just what we needed. Coffee soon!

Delighted to hear you had such a great time in my hometown Mr.T. I would not give up my adopted home of Vancouver for anywhere else in the world (and I've tried), still, I do miss the soul of Montreal. But after 25 of those brutal winters and equally brutal summers I'm perfectly happy in the rain ... and I don't have to shovel it. Look forward to reading the rest of your trip report.

Next trip; try Vancouver. It's the only city in the world rated the best place to live five years in a row and is consistently in the top 10. May/June and September are usually the best times. Just keep an eye on the long range forecast; the weather can change in an instant.

Glad you had a great time, and I love your approach to photographing with minimal equipment, hope your weather improves, Im in Minnesota so its about to turn, well you know, turn cooler!

Glad you had a great time. I'm in love with multiple Candian cities - Montreal, Quebec, and Vancouver. The food, people, scenery are all fantastic.

Honestly, I wish I would have bought a bit of real estate in Vancouver when I first started going. Of course, that applies to a lot of my favorite places.

Glad you enjoyed your vacation. I look forward to seeing your photos and updates on Montreal. It's somewhere I would like to visit one day.

At the end of last month we took a vacation to Santa Fe. It's 634 miles from Dallas. We haven't been in years. The light and clarity of light there is wonderful for photos. I took my Fuji X100s and my Oly EM5 OMD2 with the 12-40 f/2.8 lens that I used interchangeably. It was mirrorless bliss.

I stopped using camera bags for walkabouts years ago. Just an extra battery or two in my pocket. The more fiddling with gear on a walk the less thinking you're applying to composition in my opinion. Sometimes less is more.

I am off on a business trip to Berlin next week. I was not even thinking about photography but this has spurred me on - rather than depend on my ( rather fabulous ) new iphone 11 thingy, I am definitely taking a D700 and nifty fifty. I expect the shutter sound of a D700 to wake small children and alert the police, but I am ready.

Thanks for the prompt, Kirk.

Montreal is terrific. My wife and I go once a year or so, usually for 3-4 days at a time. Perfect for walking around Old Montreal, seeing some sites, and enjoying the great food. It's only a 6 hour drive from where I am in the Toronto area. I've been doing the one camera, one lens thing for a long time now. When I head out anywhere I never bring a second lens. If I miss a shot, then I miss a shot. I worry about the ones I can get. Quebec City is wonderful too but it is a bit of a tourist trap these days. I actually prefer it to Montreal though.


Sounds great. Looking forward to more of your photos.

"If you fear using your camera to take street photographs you might want to head here to practice since the people in the crowds are all taking photographs of each other, of all the fabulous, old building facades, the other tourists and much more."

Very similar here in D.C. (Just add lots of monuments and museums to that list of subjects.) One can non-self-consciously take photos of everything, all the time. I love that. Plus a very good metro system.