Preparing for a high performance 2020 with a computer upgrade for the New Year. It's about time. 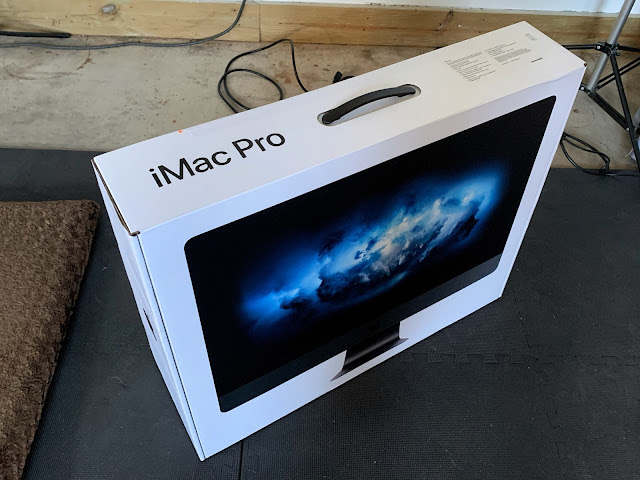 My CFO and I had a long talk about workflow efficiency and how it relates to profit and optimized workplace happiness. We looked at how long it was taking for my existing (circa late 2013) computer to dig through a folder of 1500+ files from the new Panasonic S1 and S1R cameras and convert them from raw to Jpeg in Adobe Lightroom and realized that we were losing out on gobs of productivity benefits. Plus... I wanted a cool, new computer for my desk...

I've been intrigued with the iMac Pro since it was announced and decided to stretch a bit from my usual frugal way of doing things and just bite the bullet and get what was for me a somewhat aspirational upgrade. I also wanted to kick the old, internal spinning disk HD technology to the curbside and take advantage of a much faster SSD drive.

I bought the Apple iMac Pro machine online and arranged for same day (same hour!!!) pick-up from my local Apple store. I buzzed into the mall with all the info in my Apple Wallet and was heading back out of the store about seven minutes later. With a massive box in hand. Now I'm trying hard to clean up everything on my actual (real, physical) desktop before I fire up the new machine and use the "migration" tool to transfer files and applications to the new Space Gray wündermakina.

We'll put the old machine in the boy's recently vacated room which I am converting to a second home office and hopefully a guest bedroom. I figure guests should have some internet access and a screen that's big enough to watch movies on.

Studio Dog is totally indifferent to the purchase but then I didn't expect her to get too excited about it....after all, she can't eat it.

Now that I've got the main part of the computer equation settled for this next year I'm researching some large SSDs for short term and intermediate file storage, and intermittent access. That might be the one situation in which big, spinning hard drives still make sense. Someone geekier than me will have to step in and explain the pros and cons.

Going quiet now. I have some migration to accomplish. I'll let you know how it goes. One more post till the new year.
Posted by Kirk Tuck, Photographer/Writer at 14:32

Congratulations Kirk! What configuration did you get? I am tempted myself.

I use SSDs for current and live storage, and HDs for archival and backup stuff. Both are connected over Thunderbolt 3 to Multidrive enclosures from OWC. Works like a charm.

I hope no one is saying "Austin, we have a problem".

I hope you got the 27-inch version.

The problem with SSD is that you simply, absolutely can't go back. This is like being happy smoking MJ and then trying crack. Your life is forever, from that moment forward, altered! Things are now different. Your boot-up time is down to about 30 seconds, and anything more than that is an e-t-u-r-n-i-t-y.

wow almost hit the buy on that one to. but erased the basket again :D

I let Migration Assistant run all night last night (slower using Wi-Fi) and this morning I can: The Eagle has landed.

I walked into the office this morning, touched the space bar on the keyboard and the new iMac Pro sprung to life, ready to do my bidding. Last task, reconnect all the external hard drives....

This is screaming fast compared to my old machine.... Maybe I should get a helmet.

I have stuck with Samsung SSDs, not the cheapest, but probably the best.

From personal experience, the T5 1Tb Samsung SSDs are exceptional.

Hope this may be useful and a very Happy New Year Kirk!

https://www.promax.com/blog/ssd-vs-hdd-storage-which-to-use
A little primer on use with video.

Like megapixels, resolving power etc this is a case of "it depends"
An SSD connected to your mac in anything other than TB 3 is going to run at SATAlll speeds. The USB C gen 1(2) theoretical throughput of 10GB/sec may or may not happen. And the question is, do you need the speed?
Editing 4k video takes some throughput, in this case, an external SSD as a scratch disk may be better than an external HDD.
I have Samsung and Crucial SSD drives mounted in external USB cases that run well, according to Black magic speed test.
I can send a PDF of the results using 3 different connection methods and two different interfaces.
I can also send the link to the external cases I bought, via Amazon, to house the three 2.5" SSD's that I purchased.
So Nvme is the fasted throughput but as of yet few outlets sell this configuration--
https://eshop.macsales.com/shop/owc-envoy-pro-ex-thunderbolt-3

https://www.microcontrollertips.com/why-nvme-ssds-are-faster-than-sata-ssds/
Scroll down to the heading "NVMe SSD on the Market"

For backup and storage, it is difficult to beat the prices of a standard HDD. Reliability is great and for most situation the throughput speed with not hinder your workflow. Check out BackBlaze and see what they use and their reliability reports.

This is way too much and at the same time just a beginning.
Understand that I have just enough knowledge and experience to be dangerous.

Working with a newer computer is instantly addictive. And I didn't have to learn new stuff. Double bonus.