My thoughts on the Olympus camera announcement... 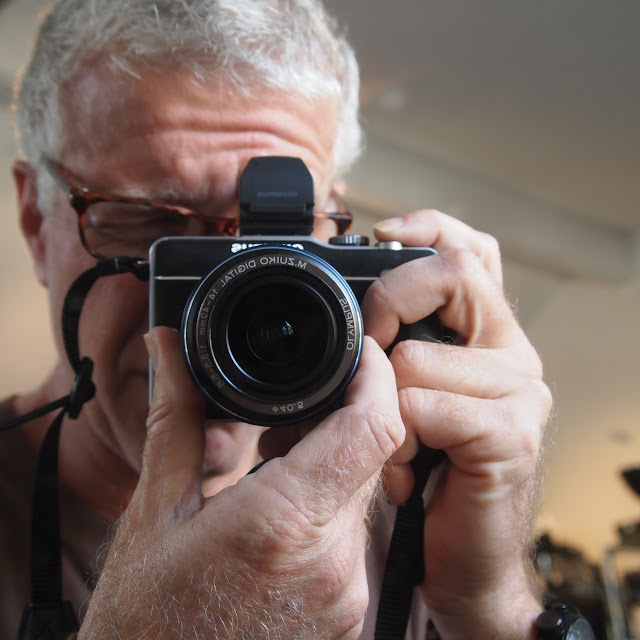 I may no longer be a good, mainstream reviewer for people who have stereotypical ideas about cameras. You know, the idea that a camera must be full frame to be a professional imaging tool. Or, that all mirrorless cameras should be tinier than a year end bonus for convenience store workers...

I also feel pretty strongly that one CAN use a micro four thirds camera system for professional work.

So, I guess it was yesterday when all the announcements happened over at Olympus. They released/announced/debuted/showed off the new Olympus OMD EM-1X camera. Given that every reviewer gushed over the provided lens (the Olympus Pro 12-100mm f4.0) I feel a bit vindicated for my lens preferences... But here's the basic camera story:

The camera has the same imaging hardware (sensor) as the previous (and continuing) model but has been upgraded with a permanently attached battery grip to shut up all the people who resist carrying extra batteries. It also has two high speed processors instead of one which means the camera can process images faster and with more image file structural nuance. But the rest of the story revolves around features that will mostly appeal to photo industry outliers, wrapped around one feature that might ensure healthy sales: world class, leading edge image stabilization in stills AND video.

With the aforementioned 12/100mm lens the folks at Olympus are suggesting/stating that you'll be able to get up to 7.5 stops of image stabilization when using the new camera in conjunction with the 12-100mm lens. That equals the ability to handhold a five minute exposure with the expectation of perfect sharpness (hyperbole alert...).

Most people are focused on the size of the camera body. "Oh god!!!! It's way too big for mirrorless!!!!" But I think those folks are ill informed folks who don't get that Olympus was trying to design and produce a "no holds barred" professional camera that could compete with everything at the top tier of the market. If they want a small camera Olympus makes a large selection of them.  I personally think cameras shrunk too much and this is the swing back of the pendulum to a point in time where ergonomics were taken seriously and cameras were made to feel comfortable and secure in the user's hands. The bigger body, and the relocation of most of the battery power to the grip, will also help with thermal distribution and heat sinking which should mean that the camera never overheats; even when pumping out lots and lots of 4K video.

The increased surface areas of the new body also means better placement and access to physical buttons and dials.

The camera is big and bulky but not unmanageable, and certainly nowhere as big as the top pro models from Canon and Nikon. Really, if you have trouble carrying this new Olympus around you need to get to the gym more; or buy a set of weights for your studio.

The camera's secret features (at least to the size and weight reviewers) revolve around its computational capabilities such as the multi-shot, hi-res imaging. Now you can use a camera in a handheld capacity and get 50 megapixel files from a blending of eight exposures (moving the sensor between each exposure). You also get still photography features like in-built, computational, neutral density filtering. The video specs are as good as the previous flagship but no better....

The guys (Chris and Jordan) from DPReview did a video about the new camera and at the end Chris asked, "Who is this camera for?"

I'm here to tell them that it's not for the orthodontist who is hell bent on getting a full frame D850 from Nikon. It's not here for the portrait studio owner. It's not the right tool for most street photographers. It's not even really here for wedding photographers. At $3,000 (body only) it's not a general audience camera either. So, who do I think it's for?

This is a camera for the serious filmmaker who dislikes the learning curve (and the weird postures required) for using handheld gimbals but who needs a very, very stable frame in 4K video which can be inserted into projects. People in this field (video and film making) should flock to this camera in order to save money on full fledged SteadiCam effects. It's the magic sauce --- a handhold able, small and light Steadi-Cam rival for $3,000. What does a full on Stead-Cam rig go for? Think $5,000 and up with no camera and the need for additional accessories. Film makers should flock to this rig for special effects, walking and tracking shots and much more. It will replace sliders, gimbals and SteadiCam rigs. And it will do so at a much lower price, lower profile and much less mass. All of which means it will be easier to learn and to work with in the field.

While it may seem counterintuitive I would also say that this camera and lens system represents an alternative to traditional camera systems for sports work. The high frame rate and fast auto focus should make for a formidable challenger to much bigger and heavier full frame sports cameras and shift the balance by making it easier to get through the day, stay steady and make sure you've nailed everything ---- courtesy the EVF for concurrent review and feedback as shooters work.

The basic imaging specs aren't "state of the art" but they don't need to be. Not every camera can be the absolute best image producer in every field. If I were in the market I'd choose one with "good" (meaning: client acceptable and photographer happy) imaging characteristics but one with "great" handling and throughput.

I've come to be a big fan of the Panasonic G9 because in many ways it's the predecessor of the new Olympus camera. The G9 is weather sealed, incredibly solid, a great photograph generator and it's fun to shoot. Part of that fun is the availability of fast frame rates coupled with instant feedback.

I know $3,000 sounds excessive for a small sensor camera but keep in mind that the target audience is the working photographer who may use his or her camera every day in all kinds of conditions and with multiple use scenarios. It would also include someone whose assignment sheet might include getting the "money shot" at an event and then, minutes later also doing a video interview with the winner. The sting of the price will be forgotten soon after successful content comes rolling out; consistent and more than adequate.  A good shooter will become profitable with this kind of camera just after the first few assignments...

It may not be the camera for you or me but it is at the perfect camera for someone. And if Olympus had gotten the EVF implemented as well as the ones in the Fuji XT3 and the Panasonic GH5S it may have appealed to even more of us.

Disclosure: I have not handled or shot the new Olympus but I've read the specs, watched trusted reviews and disagreed with many. Your mileage will certainly be different. Make sure your mental tires are properly inflated. Proceed with caution.
Posted by Kirk, Photographer/Writer at 21:20 21 comments: