I've changed the day I go to San Antonio to look after/hang with my dad. The Sunday Downtown walks are back with a vengeance. 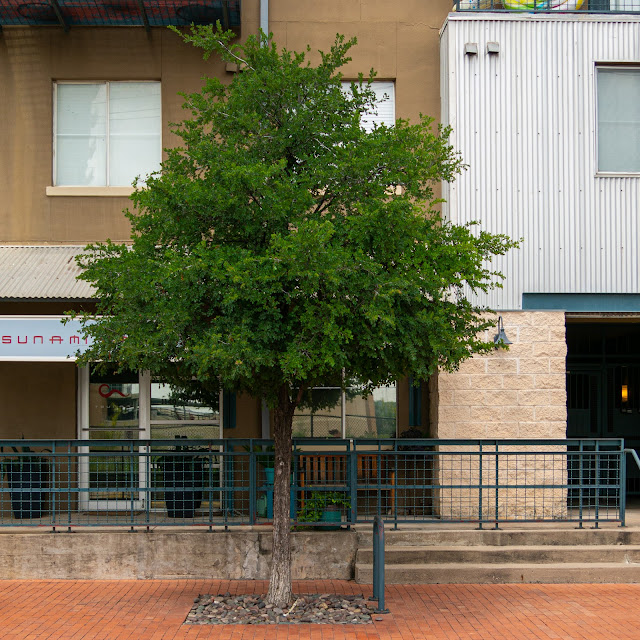 In the recent past I spent nearly every Sunday afternoon walking around Austin's vibrant and strange downtown, documenting everything I could find that either changed or stayed the same (hmmmmm). That ambulatory pleasure fell to the wayside when my dad entered memory care about a year and a few months ago, victim of vascular dementia. I spent my Sundays bringing him chocolate and the New York Times, hanging out with him and sharing lunches.

Now we're into a new phase and Sundays aren't the best days to meet with doctors, nurses, administrators and even lawyers. Mondays seem to work better for everyone involved in my father's care and I've re-oriented the schedule. He no longer is interested in reading the newspaper. He hasn't requested chocolates in a while. Nothing that ties me to "Sundays Only."

Today was typical of the new scheduling, I headed down this morning to supervise the delivery of a hospital bed for him. Of course some stuff got fucked up and I had to jump in and motivate people to get things done in a timely manner. But that's okay; that's one of my jobs right now. But being there on a Monday returned to me the area pleasure of the Sunday walk.... So that's what I did yesterday.

This time I went wildly minimalist. I took only a Canon G15 and a couple extra batteries in the pocket of my khaki shorts. I never needed the extra batteries because I seem not to shoot with the wild abandon I once did. I'm also getting used to finally accepting "dirty baby diaper hold" and using the rear screen on my camera (since the little tunnel finder is less than optimal). Maybe I am more accepting because I finally got a new prescription for my glasses and, with bifocals, I can actually (mostly) see what's on the screen...

But the little camera is surprisingly good. Really good. Well, if your  final target is images on a (very cool) blog or scattered through Instagram. I like shooting with the lens nearly wide open all the time and I keep being amazed at the really good image stabilization that's built into the system. I try to shoot my G15 mostly at ISO 80 but really had no fear popping up to ISO 200 or even 500 to shoot interior spaces (see library pix below).

Wow. It's so different to carry something the size of a deck of playing cards instead of a brick around one's neck. And still being able to come home and make nice photographs from the raw files. 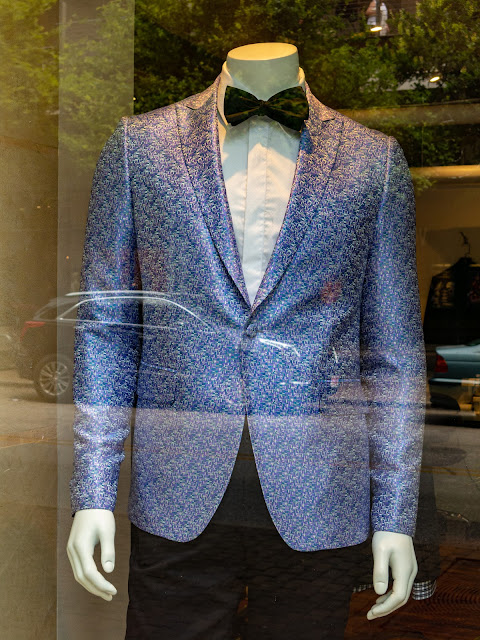 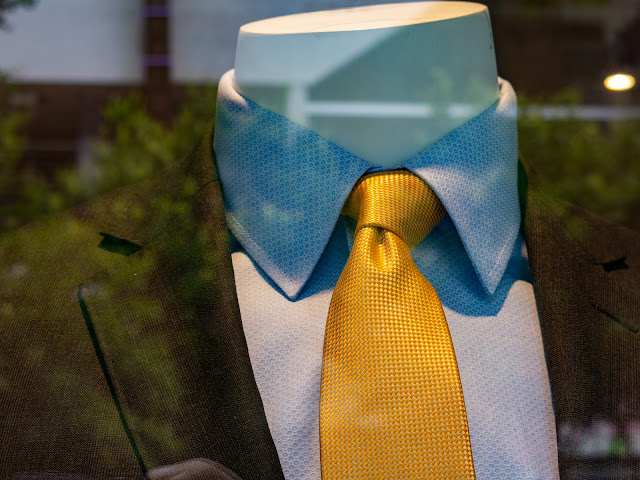 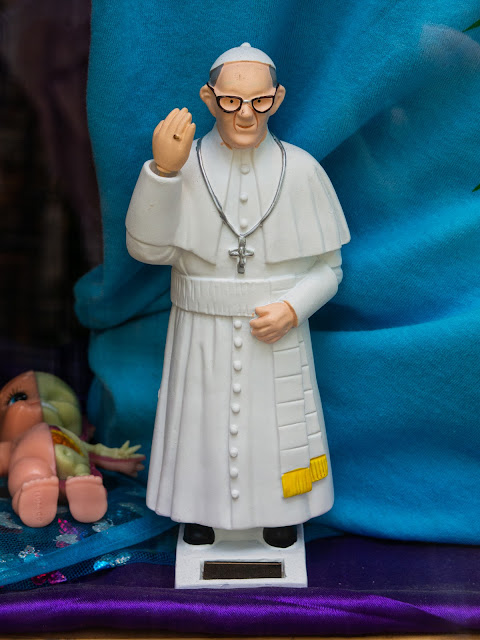 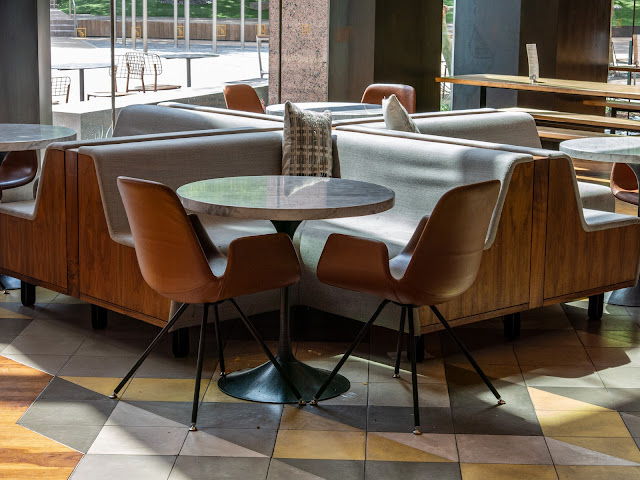 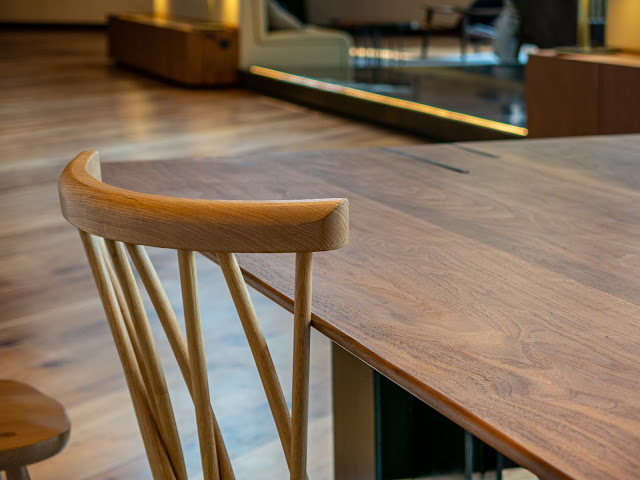 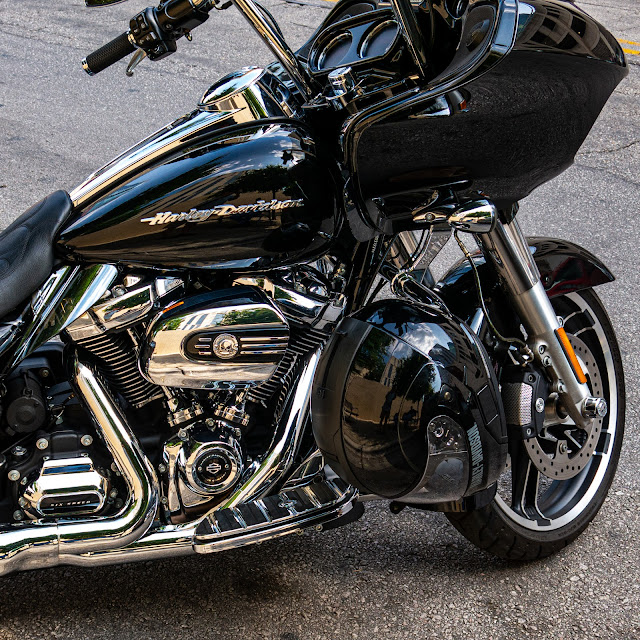 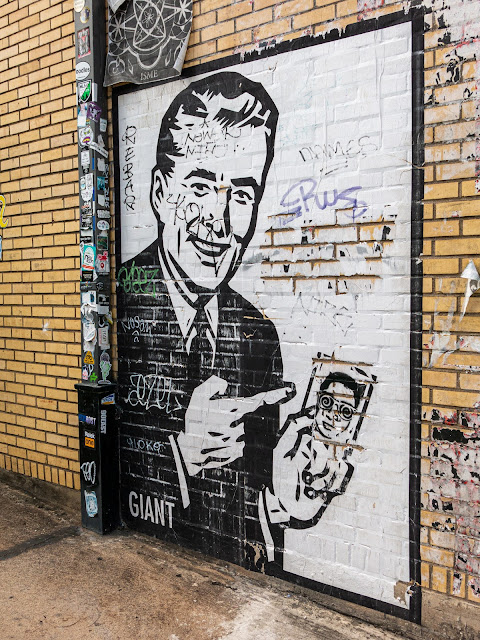 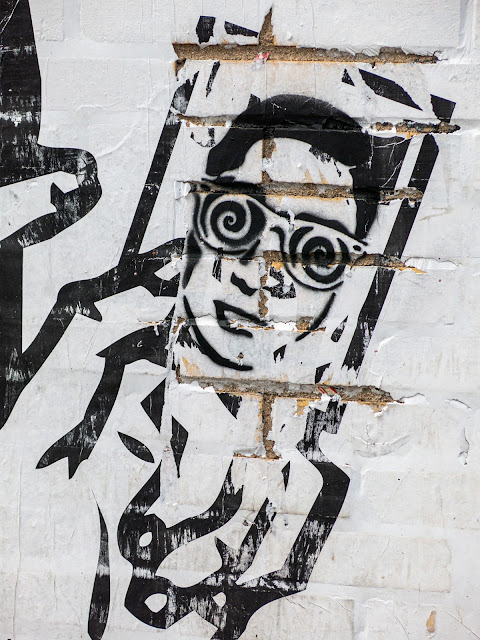 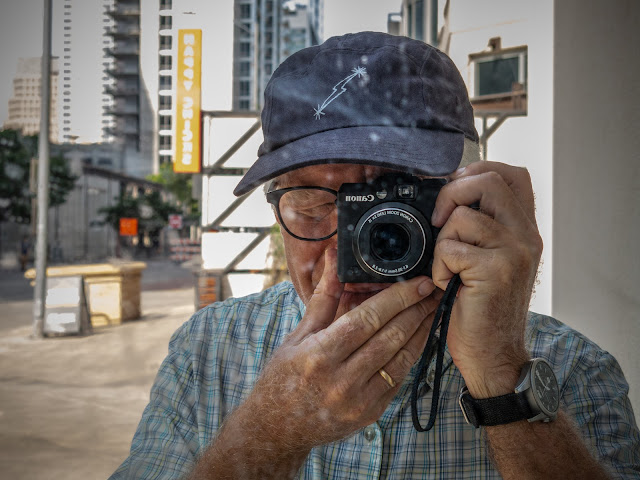 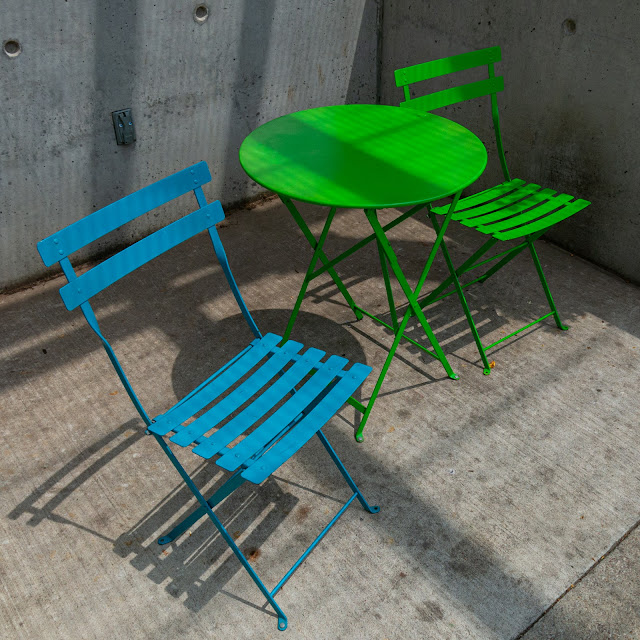 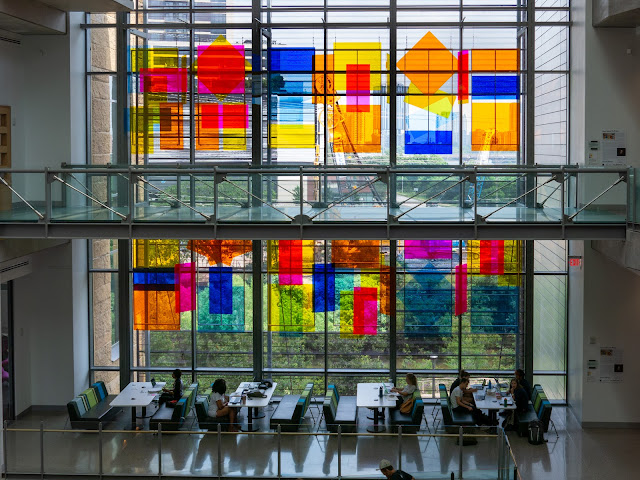 The image above, and all the images below, are
from the new Austin Public Library. 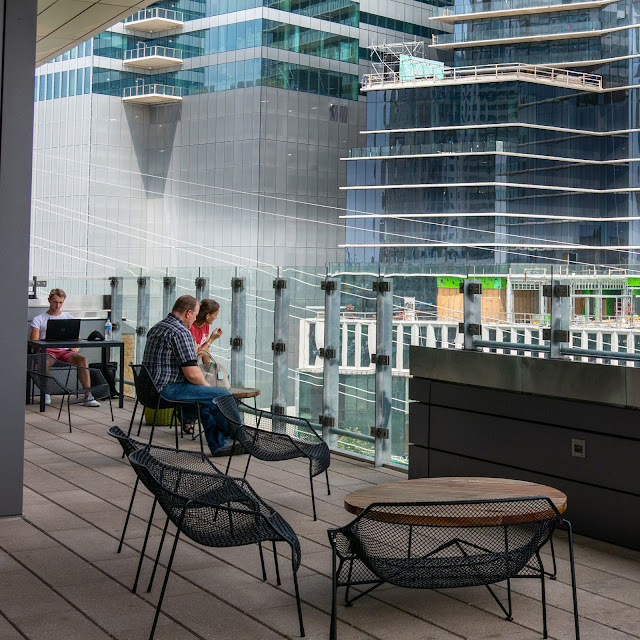 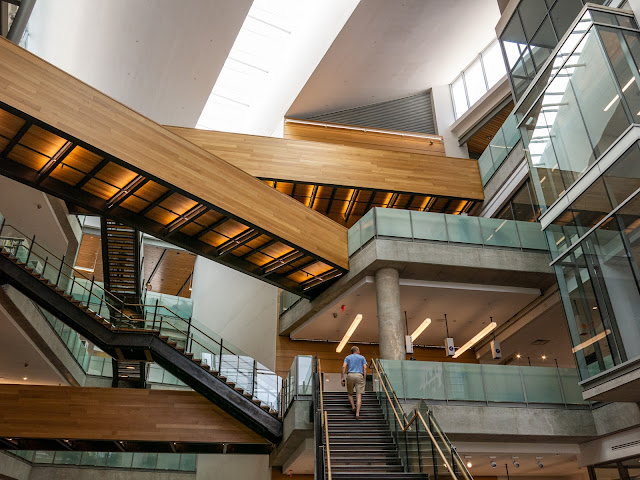 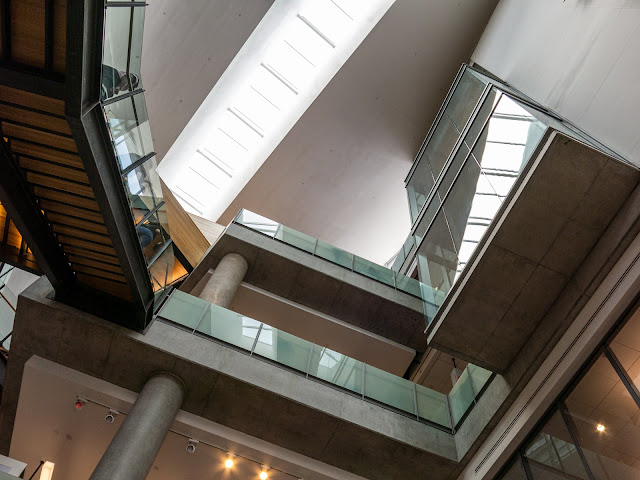 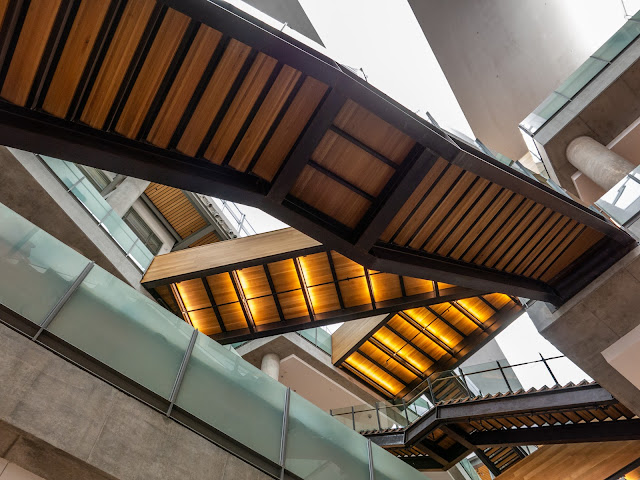 all handheld and unburdened by deep thoughts.
Posted by Kirk, Photographer/Writer at 22:00 7 comments:

Many, many years ago I bought this big (16 ounces?) coffee cup at my local Starbucks because I loved the deep red.... 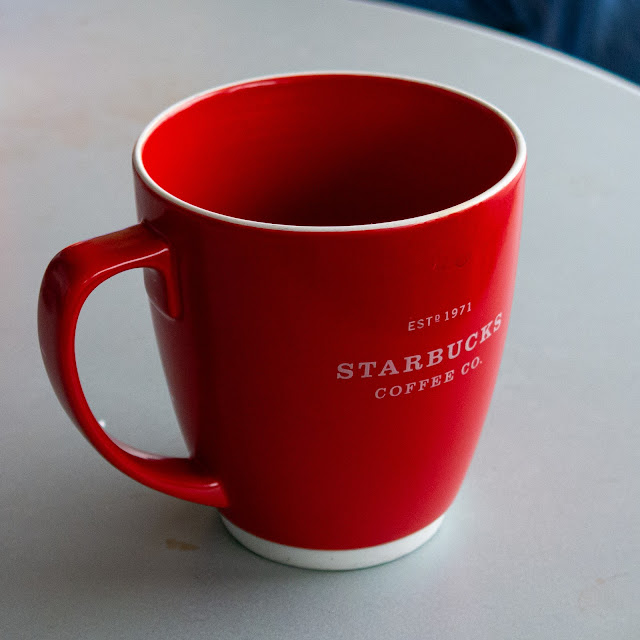 ...now I take it back to Starbucks when I go there for meetings with friends or clients so I don't have to get a paper cup (lined with plastic) along with a plastic lid. I'm skipping the whole recycle thing and going straight for sustainable. If I bring my own cup I get a discount. No matter which size I order the baristas tend to fill it up as far as they can (commensurate with leaving space for half and half...).  My morning cup of external coffee is now about $2.11. And I like the cup.

I photographed my cup with my latest "love affair" the Canon G15. What awesome color for a used camera that cost me $200. Also enamored of the focal range and the close focusing capability. Nice little cameras!

I'm busy with family stuff but I sure like dropping by to share my opinionated points of view. Hope everyone is doing well.

Are you doing your part to cut down on plastic waste? Are you buying any classic old shooters?