It's Summer everywhere but it's been mild in Austin this year. So mild that I'm paying less in utilities which leaves me more $$$ to buy gear. Surprise! 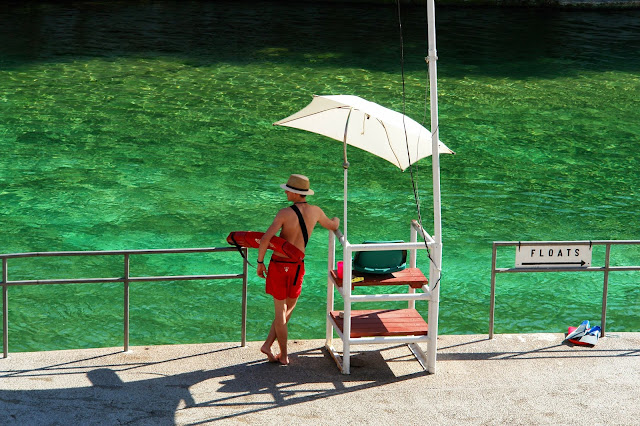 Here we are in early July and I have yet to pull a sprinkler out to water the lawn. We've had bi-weekly rains all through the Spring, the lakes are full, and the grass is emerald green and growing fast. It's certainly a contrast to many other places; Alaska is setting new high temperature records this week, and the week before parts of France hit record highs of around 115 degrees Fahrenheit. At the same time I was able to do a long walk in mid-afternoon, through downtown Austin, without breaking sweat. It's just not fair.

I took advantage of the mild Summer weather over the last two weeks to go outside and get to know my newest camera addition; the X-Pro2. It's a camera that's been out for over two years so I'll assume you know it's a Fuji camera that is configured like rangefinder cameras of yesteryear, complete with a hybrid viewfinder that gives users a nice EVF or a bright line, optical finder reminiscent of the Leica M series optical finders. The camera also features a 24 megapixel sensor and great external controls.

I have yet to use the X-Pro2 for a commercial assignment but that hasn't stopped me from using it daily for personal work. I've used it mostly with the 35mm f1.4 and the 23mm f1.4. I'm not much interested in using the camera with any of the bigger and heavier lenses like the 16-55mm zoom lens or the 100-400mm zoom lens. I like the notion of the OVF and the bright frame lines, and they seem ready made for the moderately wide and normal/standard focal lengths.

So far I've been leaning more towards the 35mm lens as the "favorite-take-anywhere" lens but I keep the 23mm handy just in case some slightly wide scenic inspiration presents itself.

Lately, as I've warmed up to the X-Pro2, I've started hearing lots of rumors about the imminent release of the next model in the line, the X-Pro3. No official information about this model yet but I'm sure it's only a matter of weeks or months before it turns real.  This time around I'm convincing myself to focus on the current generation, the ones I have in my hands, and only look to the new camera if it's so wildly superior to all of the current Fuji cameras that not buying it would be as stupid as not buying Apple Computer stock in 2002.

Instead I've decided to dive as deeply as I can into the X-Pro2. That includes becoming operationally efficient and thoroughly understanding how to best leverage the hybrid finder. It's no small thing that the viewing window on the camera is positioned to the far left of the camera, as it faces me, which means I can keep my nose off the rear LCD while shooting.

But, as you probably know, I'm adamant about the idea that cameras, like rattlesnakes, (should) always travel in pairs. I bought my first X-Pro2 used from Precision Camera here in Austin and went back to see if they had any new arrivals of used X-Pro2s. They did not but they did let me know that the camera, brand new, is currently on sale (nationally) for about $1499. With my current, staggering investment in Fuji cameras the $200 price drop was not enough to move me from the sidelines. Instead, I started looking around the web to see if I could snag a mint X-Pro2 for $1,000 or less.

I found what I was looking for at Camera West / Leica Store S.F. It was a mint, like new, Fuji X-Pro2 in the original box with all the manuals, paperwork, included flash, camera strap, original charger and  126S battery. The package also included a very nice add on grip and the whole package was a very reasonable $950, with shipping included. I bought it and took delivery of it this afternoon. It's even nicer than my "starter" X-Pro2. This one gives all the appearance of never being used.

It doesn't make a lot of sense to go all in on X-Pro2s when actually the X-H1 is a more capable camera but then I've never been particularly logical about camera buying and I always remember reading an interview with David Bailey in which he confessed to owning well over 100 different cameras. Believe me, I am no where close....

On the other hand, I did two portraits today and decided that I could use the opportunity to compare my three main cameras of the day. I shot one set of images with an X-H1 and one set with an X-T3. I'll shoot the same set up with Ben as a model, using the Pro2 in the morning, tomorrow. Just to make the whole exercise seem more precise I've used the same 90mm f2.0 and the same lighting and settings for the first two images and intend to maintain that rigor for the third go-round.

I'm shooting at f4.0 and 1/60th of a second, and the ISO was 640. Both times I used a tripod. The lighting was the same. While I've just done the first two cameras I do have a few small observations. The X-T3 creates a slightly less contrasty file. The X-H1 has a bit more snap and contrast. Otherwise there's not a lot of difference between the two cameras. Judging the overall balance and appeal of the Jpeg files I'd give the X-H1 the nod if I had to choose.

It seems as though the X-T3 would be remarkably better, given all the press it's gotten but then again it may just be down to the fact that my 27 inch computer screen is the limiting factor; the "filter" as it were.

I'll let you know if the X-Pro2 does any better or worse after that test.

In swimming news....the lower temperatures and the aerators at the pool are combining to keep the water nice and cool this Summer. After a rather long warm up set this morning my lane mate and I knocked out twenty-one 100's of freestyle on a set interval. Even though the holiday is in full swing the masters workout was well attended. I've been working on maintaining a good streamlined body position  lately and paying special attention to keeping my form solid even when I get tired (especially when I get tired...) and it's helping increase the pace I can keep during longer sets.

The advice I keep getting from our coaches is to concentrate on my kick during freestyle swims. Most of the power comes from the arm strokes but the speed and tempo come from the kick. Most programs use kkckboards during kick sets but I find it messes up the stroke-to-kick pattern. I've ditched the kick board and it seems to be helping me incorporate my kick in a more natural way. Some people use fins during some kick sets to work the legs a bit harder and to help create more ankle flexibility but I think fins can be a crutch and I'm finding more improvement by bypassing them and just kicking better.

A question for all the financially savvy people out here: When is the stock market going to turn and tank? If you could just let us know in advance this time we'll be sure to be more ready than last time....

Posted by Kirk, Photographer/Writer at 13:50 10 comments: