Critical missteps in lens design? Or a plot to weaken the muscle strength of photographers? 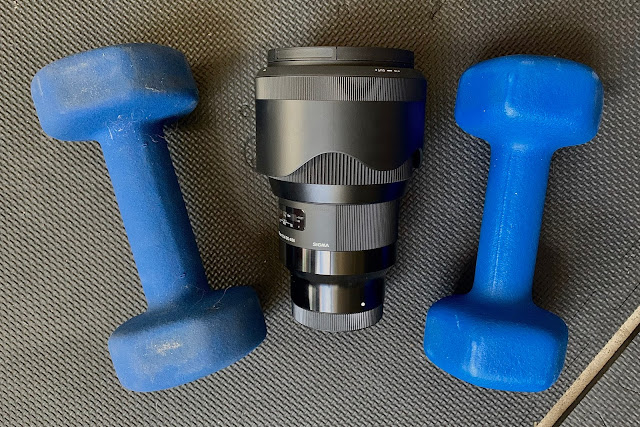 Let's be Frank. Real photographers secretly enjoy buying their lenses by the pound. Or Kilo. A lighter lens represents surrender and infamy. Right?

It's so rare to see a lens introduction get so much press but it looks like the very recent introduction of an "improved" version of Sigma's almost perfect 85mm f1.4 Art lens from 2018 is setting the reviewer world on fire and revealing to me very clearly what the priorities of those weak and out of shape writers and V-loggers  really are. I'm not sure they care as much as they say they do about pure performance; it's beginning to look like all they care about is not being revealed as too weak and lazy to carry around a take no prisoners, super star lens.

The big news about the new "DN" (mirrorless native) is not that it soundly and roundly outperforms our previous, big-boned (but brimming with personality) lens of the same speed and focal length but that it's shorter and weighs a pound less than the original. The trade off seems to be that the "new and improved" lens has much, much more pincushion distortion and also slightly weaker in performance on the edges and the corners than its endlessly lauded ancestor. Yes, the new one has even more elements, and those elements are even more sophisticated and complex, but one can't help but wonder if most of the complexity and preciousness of the new design is aimed at making it almost as good as the original....but in a smaller package. Downsizing engineering as opposed to the reckless pursuit of optical perfection.

I'm mostly kidding here and I've already pre-ordered one of the new ones. But I still wonder. The "science" of optical design can not have changed a tremendous amount in four or five years so you have to understand that the "new versus old" shift is largely a recalibration of compromises. Buy the new one and watch your left biceps atrophy. Buy the old one and suffer the dreaded effects of manual portage. Suffer the ruinous added weight of the original for the extra 1% of quality in the corners or choose the lightweight version and forever wonder how much optical magic they had to remove to get the lens corpulence under control.

I guess it's really a tempest in a teapot (as usual for web reviews!) since both lenses are demonstrably better than anything any of the major camera manufacturers can come up with in their own lens lines.

I'll confess that I dislike the weight of the original lens. It's f-ing heavy. Especially if you plan to carry it around all day long. But having just used it almost promiscuously over the last three days I have to say that I'm in awe of its sheer capability to make photographs that make me and my clients go: "Wow."

I may or may not follow through on the actual purchase of my pre-ordered lens. I might wait to see if Panasonic's S1 system roadmap plays out according to plan. They have their version of an 85mm f1.8 coming along and that may just be the sweet one to buy for carrying around and hauling on and off airplanes (if we ever get to do that again). From my experiences with their other S-Pro lenses I'm fairly certain it will be good enough, optically, that we won't be able to see any differences from the results when we peek on our computer screens. The only question, given their monstrously huge 50mm f1.4 S Pro lens, will be whether they can build one that's smaller and lighter than the original Sigma 85mm Art...

If I do opt to pick up the new Panasonic lens I'll probably keep the original 85mm Art lens out of nostalgia and some nagging belief that it's still the best lens in that focal length in the world. And if I use it then some of its magical powers will convey into my own images and help to finally make me famous and loved by the multitudes... YKMV.

Reminds me of stories I read in old magazines about the re-design of the seven element Leica 50mm Summicron M series lens back in the 1960's. Leica reconstituted the lens and removed one of the elements. Leica aficionados, even as late as the early 2000's, were still locked in debate about the relative merits of each. The overwhelming majority felt that the original ( also available as a "dual range" Summicron) was magical and obviously superior. Might we feel the same way in this case, just a few years down the road?

Posted by Kirk Tuck, Photographer/Writer at 11:09

My jaw just about dropped a couple of years ago when I saw a case containing a large selection of the latest prime lenses from Sigma and/or Tamron. They were HUGE! The manufacturers definitely followed a different philosophy from the one used by Olympus at the height of the OM era. I recall reading Olympus literature that stated that they rejected a lens design if the lens was too large (by Olympus standards), even if they outperformed anything currently on the market.

A number of companies are now trying to downsize and lighten larger lenses, especially long- and super-telephoto lenses. Canon has introduced DO (Diffractive Optics) and collapsible telephoto lenses. Nikon introduced PF (Phase Fresnel) lenses that made 300mm and 500mm lenses rather petite. Both companies have also done less extreme lightening and downsizing on more-conventional lenses by using newly-developed glasses and lighter alloys and stronger composite materials. And, now that camera bodies handle higher ISOs quite well, the companies are also offering lenses with narrower maximum apertures.

I roll my eyes anytime someone boasts about how they have no problems with handholding heavy long-telephoto lenses. I was once on a Nikon-sponsored "bird walk" at a local sanctuary. I borrowed a new camera body that I used with my Sigma 100-400mm lens. Someone else borrowed a large and heavy telephoto zoom. After two hours we had to return the borrowed equipment. The other person's arms were fatigued and sore. I was ready to keep going for another two hours (and did).

I think that the move to smaller and lighter lenses is a welcome trend. It makes photography enjoyable rather than a burden.

I think small lenses are great.

Pentax do some fantastic compact primes for their systems.

And my favourite ever lens is the pancake 20mm lumix. Quirky, but it's sheer portability and rendering makes it so very likeable.

Long may the new trend continue.