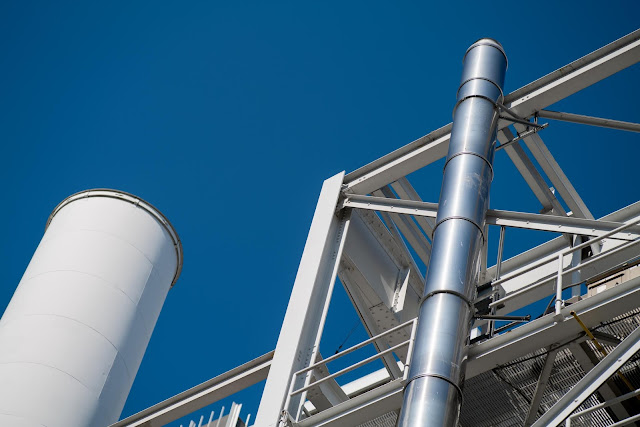 One of the very positive things about mirrorless cameras is the ease with which you can adapt lenses from across systems and across time periods. With most mirrorless systems it's a piece of cake to adapt older DSLR lenses to the new lens mounts. You'll usually need to manually focus the lens and set the aperture ring manually but you'll get all the optical performance the lens has to offer (except that a lot of wide angle "legacy" lenses don't perform quite as well on the edges and corners of the frame!).

I've been adapting lenses since I first purchased an Olympus EP-2. I started with Olympus Pen-F lenses but quickly moved on to Nikon and Leica lenses as well. It's a lot of fun and sometimes the older glass has properties that give a unique look to images. In the early days Olympus and Panasonic were the only real players in the mirrorless space and it was the short distance from the lens mount to the sensor that made adapting DSLR lenses practical. The DSLRs needed long distances since they were designed to clear the mirrors in those cameras.

Once Sony came out with full frame A7 series cameras with a short lens flange-to-film plane distance the sport of lens adaptation went fully mainstream.

In the film days my favorite cameras and lenses were from the Leica M and Leica R series. Each camera type had its own dedicated line of lenses and, while the popularity of the M lenses has never really declined once the Leica R (SLR) cameras stopped being produced there were no ready options to be able to use the lenses. They wouldn't fit on Canon or Nikon DSLRs (exceptions do apply) and mirrorless cameras were not yet on the market. These lenses were great but having been orphaned the prices dropped and more and more units flooded onto the market as people traded in for more modern fare.

One of my friends started collecting great "R" lenses at bargain basement prices back before it was cool. He figured that someone out there would concoct a method to adapt them to either a Canon or Nikon camera and, since Canon's flange distance is shorter (but not as short as a mirrorless camera) he was able to have several of the lenses adapted for use on 5Dmkxx cameras. He tired of that pretty quickly and the rest of his collection languished until Leica came out with the SL camera and the L mount. He snapped up one of the first SL's and a Novoflex adapter and started shooting that way for a while. He's moved on to Nikons and medium format Fuji for now and so I was able to talk him into selling me one of the lenses that I always had good luck with in the filmolithic age. It's the 90mm R-Elmarit. It's a basic 90mm f2.8 lens designed and built to Leica's highest standards by their factory in Canada.

I'd done some portraits with one of the Elmarits and Agfa's Agfapan 25 and 50 film that I really loved and I was anxious to try the lens with one of the new Panasonic S1R cameras to see if the magic would transfer. I'm using the lens with a Novoflex R to L mount adapter and it fits perfectly. Nice and tight. But not too tight.

I've had the lens for a while now and for some reason I was lackadaisical about getting out with it and putting it through its paces. I guess it's because I've always thought of it as a "portrait" lens and I suppose I'd been waiting until we could do portraits in the style I like again. Yesterday I decided to put the lens on the camera and just give it all a good try. But I added one more component to my test. I decided to shoot the camera at the extended ISO of 50, as offered by the camera. Why? Well, I've read many reviews of the Leica SL and SL2 and those cameras feature native base ISOs of 50. I figured that the interior genetics between Panasonic and Leica's full frame cameras were so close that perhaps the Panasonic would unlock a special look that many people might never get around to even trying.

So, everything you see here was shot at ISO 50 on the S1R and nearly every photograph was shot at either f4.0 or f5.6. Those are the apertures at which I'd always gotten the sharpest results before... 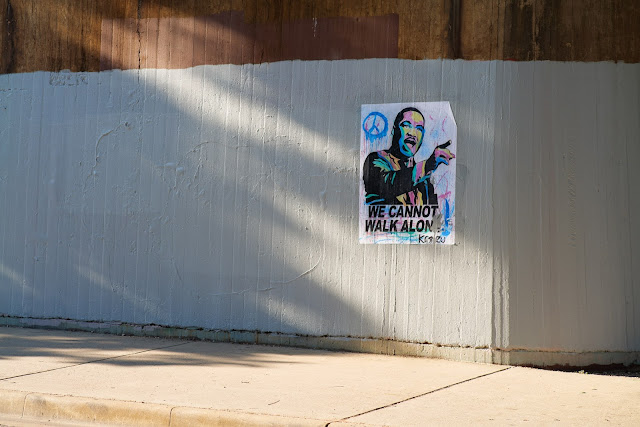 I thought ISO 50 might be limiting but I quickly discovered that, in full sun, we can work quite comfortably with that constraint. Even in lower light, such as in the image of the pair of women's black shoes below, it was easy to shoot at 1/13th of a second and have the camera compensate with its effective image stabilization. The lens is very dense which, along with the density of the camera, helps to smooth out operator vibrations to a very effective level. The overall mass gives the I.S. an almost unfair advantage when compared to less dense lens and body systems. Something to remember when we start to bitch about how much stuff weighs. 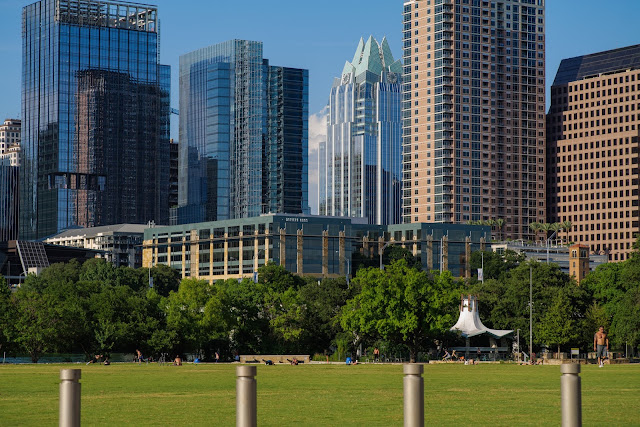 People have written over and over again describing Leica lenses as having a "3D" look that is a signature of their lens lines. It may be an accelerated placebo effect but I can clearly see a difference between previous images of Austin's downtown architecture taken with other brand lenses and what I saw coming from this camera and lens combination. It seems obvious to me but then I have the advantage of looking at 47 megapixel files when I'm seeing the effect. I hope it translates to the images here which have been downsampled to about 2200 pixels on a long edge. If you are viewing on a desktop system and click on an image it should open in a separate window at the full 2200 pixels. If you are using a phone then probably not... 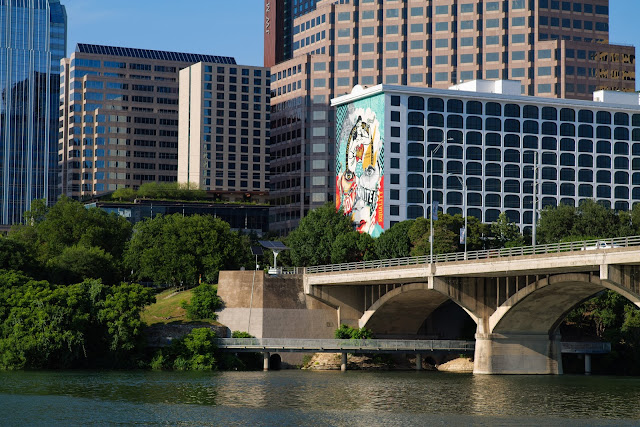 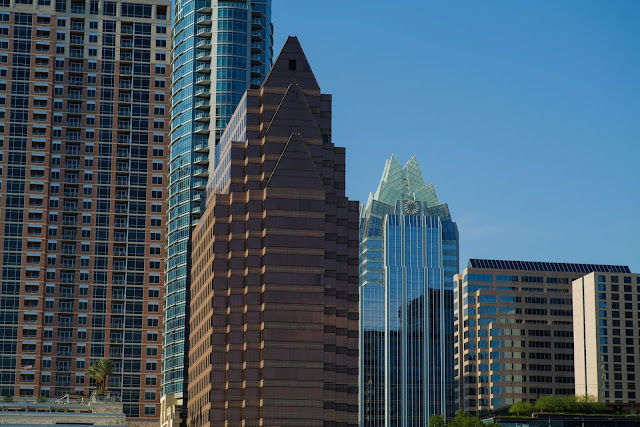 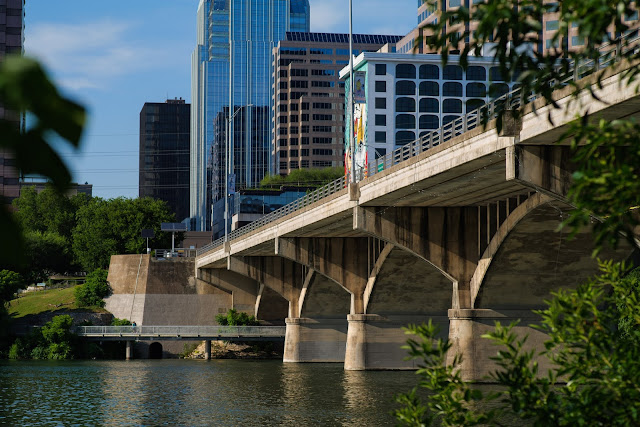 If my mind had been completely clear I probably would have stopped down even more to cover the depth of the images but I conjecture that many lenses would be equally good stopped down that far and I was interested in seeing how the combo would perform at f-stops I would normally use in my photographs. 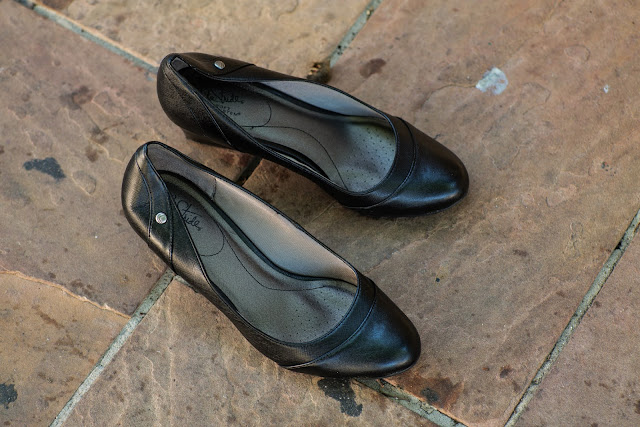 Shoes in the shade of a building. f4.0 at 1/13th of a second. ISO 50.
Don't know why this pair of shoes was just sitting on the sidewalk in front
of Chez Nous Restaurant... 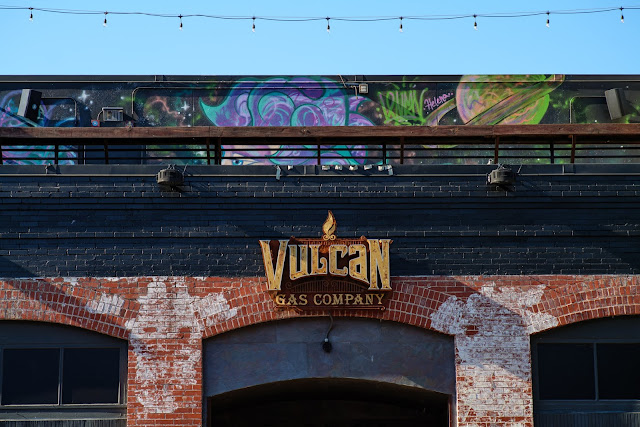 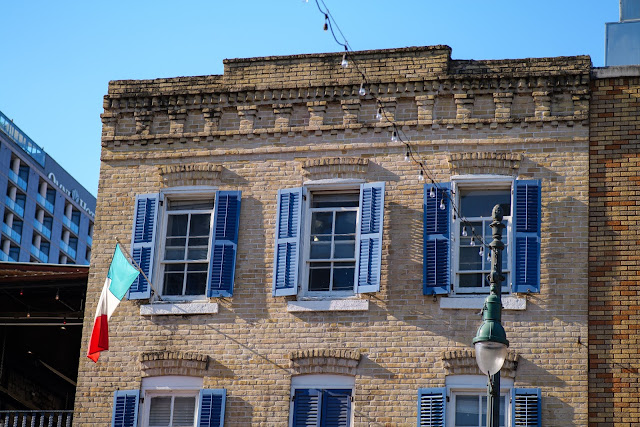 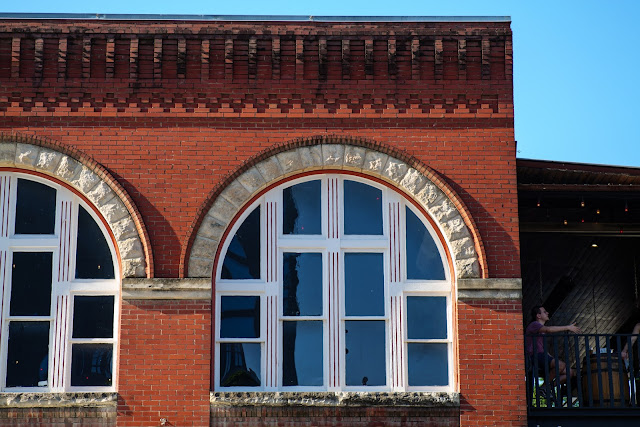 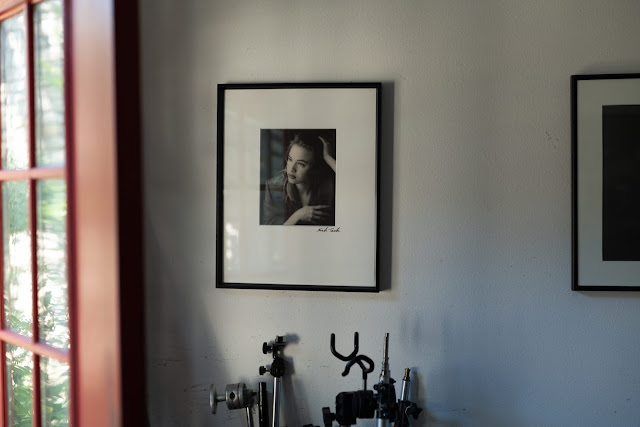 Looking toward the door of the studio. 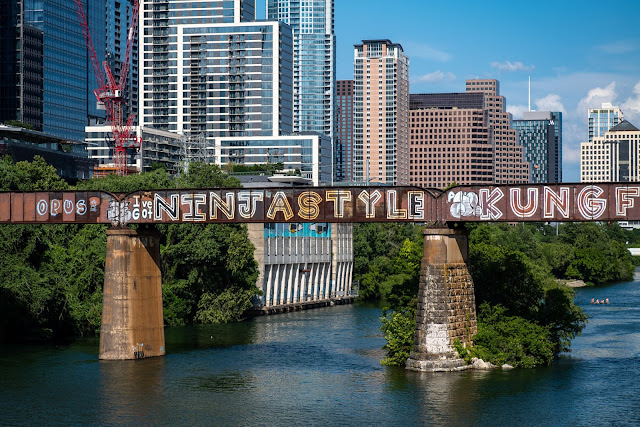 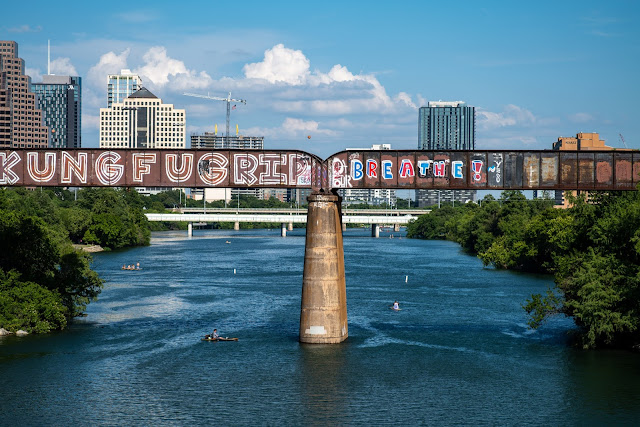 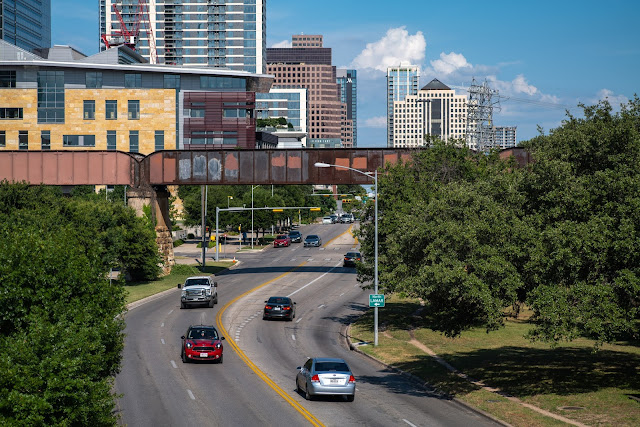 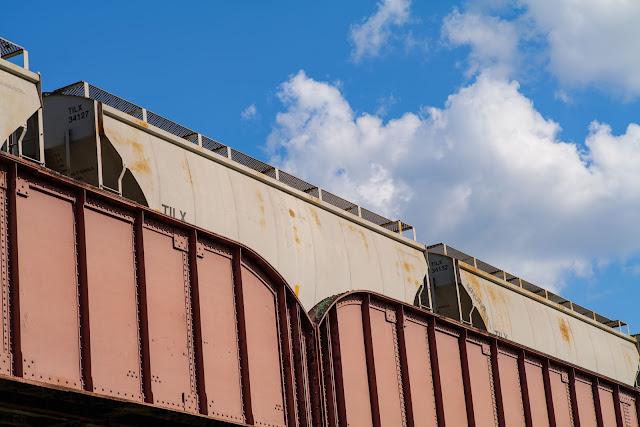 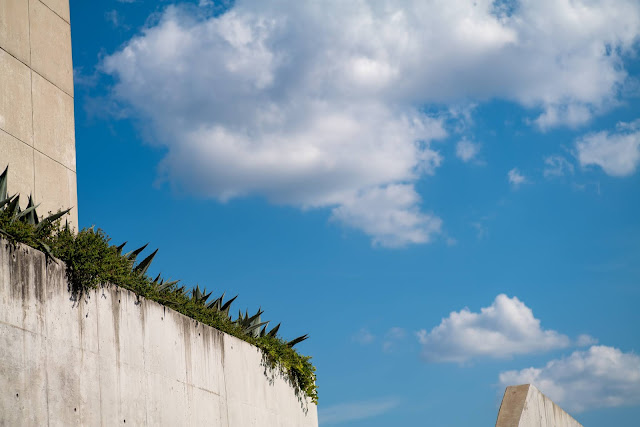 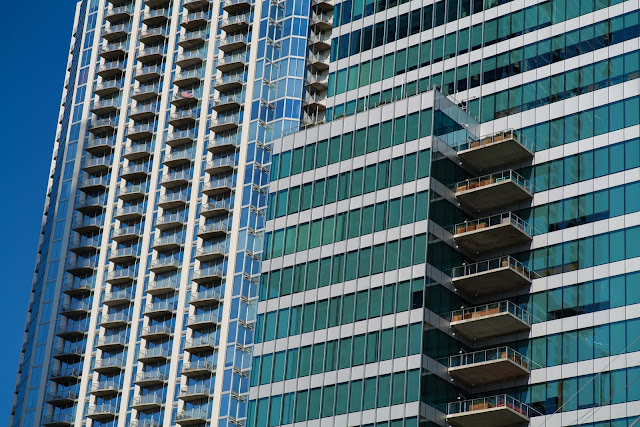 This is one of the images that really caught my attention. It looks less photographic and more "real" than I am used to. I chalk it up to a blend of micro-contrast performance and that 3D effect I wrote about above. 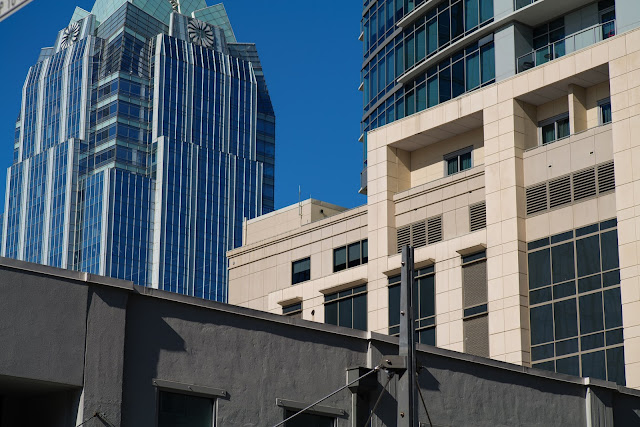 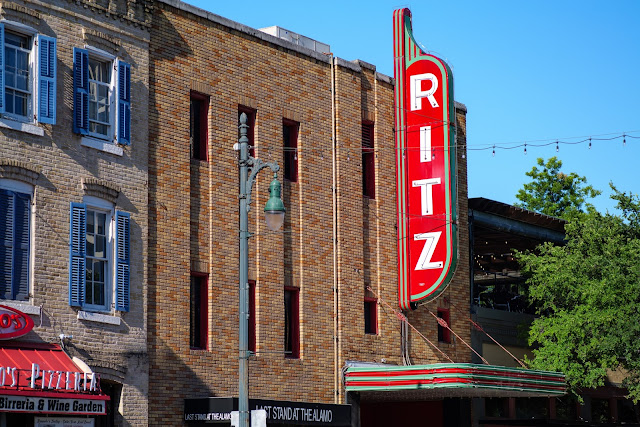 My final thoughts? The 90mm is one third the size of the Sigma 85mm f1.4 Art lens but it's just as satisfying to create images with. The sharpness is there as is the color and the tonal rendering. It's pretty superb! It's enough to push me down the path toward collecting a few more of the older "R" lenses. But I do have to say that the "Leica Certified" lenses being made by Panasonic for the S1 series of cameras gives me a lot of the same look and a lot of the same rendering.

What I like about the R lens is its very robust build, its lack of dependence on AF, its absolute feeling a reliability and its tactile perfection. Since I paid only $300 of the lens I have to say that I'm beyond happy with what it can do. Have we come far at all from lens performance in the 1980's and 1990's? Not if you were already using top grade glass back then. It's nice to have a system that provides best in class glass, even if there are some gaps in the catalog. I can only imagine how good some of the current L series Leica lenses are...

As to the ISO 50... I think the colors are just a bit richer and the contrast just a tiny bit better than what I can usually get at ISO 100. Not a "deal  breaker" in either direction but a nice look. And we'll use all the camera flexibility we can get.

Thanks for reading. KT
Posted by Kirk Tuck, Photographer/Writer at 15:33 10 comments: