Heading out for a walk, fully cognizant that rain was coming soon. So what? 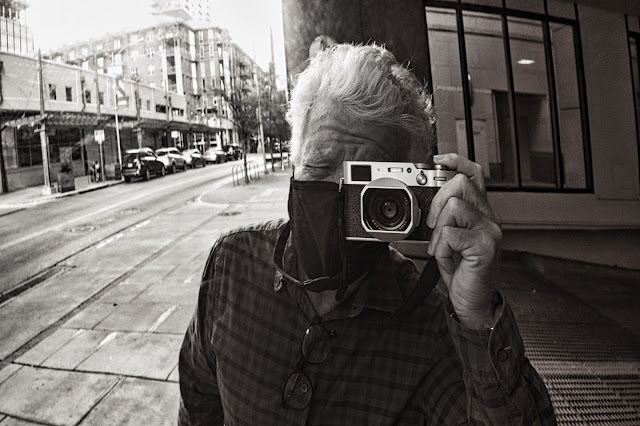 I'm currently addicted to shooting into one of those highly curved mirrors
that sits at the exit of parking garages to help drivers "see" pedestrians.
fun house mirrors indeed.
Yesterday I carefully disassembled all the camera and lens combinations in my office and put all the cameras and lenses in their respective spots in the equipment drawers. In a way this action was a punctuation of my current resolve not to work, commercially, until I've gotten a vaccine (meaning, really, until Belinda and I both have been vaccinated). Over the course of a typical year the gear is always in flux with some stuff going into short term storage (days) while other stuff came out for different style jobs. I might have a camera bag with micro four thirds cameras and lenses sitting on one part of the floor because it was coming back from a project while close by there was another bag that had just been packed full of different cameras, ready to go out.
When camera systems return home the memory cards get pulled, the batteries are extracted for charging, and the lenses are inspected and cleaned, if necessary. The second half of this year was more an exercise in adding, evaluating and then subtracting cameras and lenses based on how they performed in certain video situations. How long a lens can I use before vibration ruins the positive effects of reach? Which cameras are less noisy? Where's the trade-off between small and large sensors? How long will the internal batteries last? Which cameras can do power delivery over USB while running? But since early December all these issues have been put on hold.
All that matters now is whether I want to take a camera along with me on a walk or not. I don't have any defined projects I'm working on now; either for clients or myself. I want to shoot portraits my way and don't want to spin my wheels doing some alternative projects just to keep busy. I can figure out how to keep busy in so many other ways. If I come up short of things to do I'm sure my family can provide me a list... (attempt at light-hearted humor).
So I now choose the cameras that are most comfortable and convenient to walk with. So far these have included the Canon G16s, an old Rollei 35S film camera (with the unprocessed roll still in it after several weeks--an encapsulated review of the current film process), an Alpa 9D SLR with a 50mm Macro Switar lens on it (also with undeveloped film lurking inside), and the new (to me) Fuji X100V.
I took the Fuji out today and, being especially prescient, I also took along a Ziploc(tm) plastic bag to use as a minimalist camera protector --- in case of rain. Of which there was plenty. I like the Fuji X100V in spite of the focal length of the fixed lens. The camera itself reminds me of many of the rangefinders I owned in the past and, as I've written recently, I really like the files the camera produces. They are --- beautiful. My dissonance about focal length is ameliorated by the ability to do a 50mm frame easily, instead.
I really wanted to walk mid-day today because the weather people were predicting that this would be the time frame during which our weather would go through a big change. And there's something refreshing and rejuvenating in being caught in the storm, so to speak.
The Fuji of choice was the chrome version of the X-100V because it already has its chrome lens hood. I got a note yesterday from Amazon.com telling me that my black lens hood which was supposed to be delivered had been destroyed in transit and was now undeliverable. They refunded my purchase price and gave me a ten dollar credit to assuage my hurt feelings about not getting the product nearly instantaneously. I re-ordered it and am expecting delivery tomorrow. But now it's ten dollars cheaper. Funny how that works.
I've yet to run any real photons through the black one I bought on Monday but will get on it as soon as its new hood arrives.
I felt at loose ends this morning having finished all 2020 paperwork, reporting, conferring and bill paying. I feel like I'm in a big holding pattern until we start digging into the new year. A walk always helps me figure stuff out so I parked near a giant, historic tree called, Treaty Oak, and walked past the new murals under the rail road bridge over Lamar Blvd. I've been snapping away at my favorite parts of the mural since it started and today was no exception.
I don't know what the image below represents but I like it and I liked the shaft of daylight coming from the top left of the frame. When I parked the car I had the camera set to shoot in the Acros film simulation but I knew the photo below was really all about color so I switched to Eterna which is like using a flat file in video. You can ramp up the contrast and saturation to your heart's content in post. Which I did. 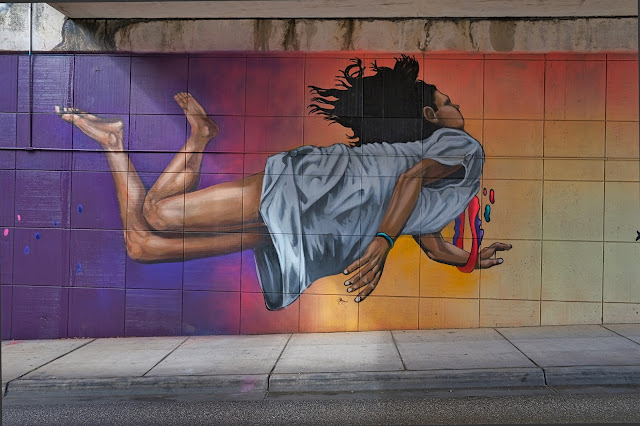 I walked around the corner to Epoch Coffee, which I found recently, in desperation, after Intelligentsia Coffee suspended operation here. The coffee is not quite as good but the shop is open and you can actually get coffee. Which makes Epoch, temporarily, better.
A side note: I like a bit of cream in my coffee and in the days of self-serve condiments you could regulate your coffee exactly. Now, all coffee enhancements and additions are made by the people behind the Plexiglas  screens. And it seems somehow wrong to return the coffee once you've handled it and taken the lid off if you feel you might need just a touch more something. I propose that Greytag MacBeth make a coffee/creme calibration chart which would show coffees from black to overly adulterated, and all shades in between. Each shade gradation would be labeled with a number to designate a fixed value of cream to coffee ratio. We could call these CC Zones (coffee/cream zones). This would allow customers to order exactly the amount of cream they'd like in their coffee with so much higher degree of accuracy than we have now.
I can imagine a bright and happy future in which I could order like so: "I'd like the organic Columbian Medium Roast Drip Coffee with Zone 5." At that point the barista or wait person would know exactly how the patron would like his or her or their coffee served and, if coffee drinkers have the pocket-sized chart it would make correcting a sloppy coffee server's faulty cream addition much more conclusive. But I guess there are bigger world problems to tackle... (damn! more ellipses!).
Today's coffee was about one full zone darker than I would have liked it but 2020 has taught us how to handle adversity more gracefully. I didn't ask for a re-do; I thought: What would the Buddha do if his coffee didn't have enough cream? In a moment of satori I imagined that he'd learn to like drinking it a bit dark. At least in this instance. 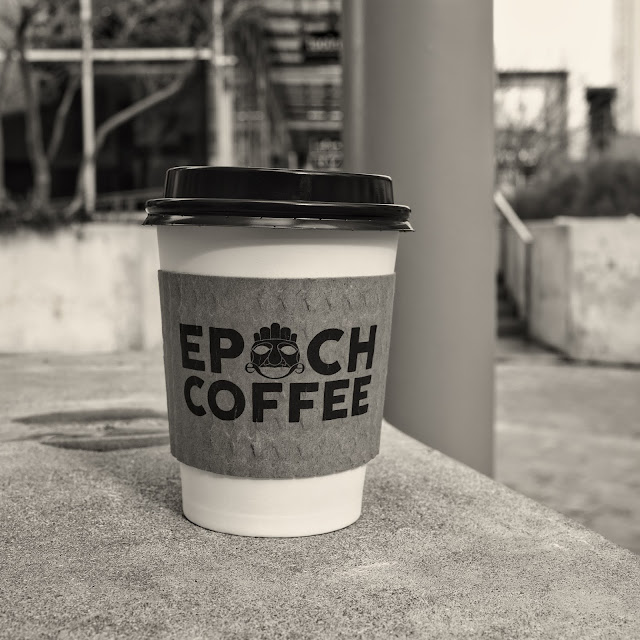 After sitting on a stone bench drinking the coffee I tossed the cup into one of those binary trash versus recycling, divided waste cans, being very carefully to separate the recyclable lid and insulating cardboard into one slot and the cup into the other. And I walked into downtown.
It was gray and sullen outside. There were few people on the street and the sky glowered like a politician in his last gasp of judicially protesting his opponent's win. Rain splashed down in unenthusiastic micro-bursts and then relented leaving all three of us pedestrians to wonder when the next micro-soaking would occur.
As luck would have it the rain and the threatening black clouds, rolling in with a 20 mph north wind, held off until I hit the spot on my intended walk that marked the furthest point from my automobile. Then the rain started to come down with a hellish fury. Real Wrath of God kind of rain. But, having been a Boy Scout I was as prepared as I could be. The new camera went into the one gallon Ziploc(tm) plastic bag and I sealed it up. The rain jacket I'd been carrying in my left hand for most of the day got put on. The hood fastened under my chin with Velcro.
And, without any other rain protection (for pants? shoes? glasses?) I trudged back through downtown walking the long, ever more dampening mile and a half to the car.
Did I come home with wonderful images? Nope. But I did come home with coffee ice cream because I stopped at Trader Joe's on the way home.
I'd love to tell you the Fuji camera is a miraculous machine that just keeps blazing away regardless of torrential rain, driven by wind Harpies, but I didn't have a filter on the camera and that's the only way it truly becomes water resistant. I didn't see much to photograph; I had my head down watching for fast moving puddles.
When I left the house it was a balmy 74° and by the time I got home it was in the low 50's. Tonight we will dip into the 30's and there's even talk about "wintery mix." Whatever the heck that is.
But I will say that it's still fun to get caught in the rain. It's still fun to smell the clean freshness of a showered world. It's fun to see how much better the paint on cars looks when they are wet. Now, if my socks dry out things will be net positive for the day.
A note: Following along in the wacky precedent of being the most bizarre of countries, our federal government  is delivering the vaccines for Covid to the 50 individual states and letting each state decide their own priorities for distribution. The smarter states have, of course, prioritized the health care providers and first responders, followed by essential workers, followed closely by ancient people living in assisted living situations. But not Texas.
Yahoo! We've decided that we'll do heath care workers and the shut-in seniors first but after that it's a grab all for anyone over 65, or any one of any age professing to have a pre-existing condition. If we lose a few grocery store clerks or other essential workers well, that's too bad. Gotta get those 65 year olds first. And the obese. Of course, the guidance is:
"Here's a map of all the pharmacies and clinics in your area. Just call each one of them over and over again until you finally find one that might have the first dose. It's your ball, better catch it fast!"
Confidence inspiring to say the least. I say we go full-on Capitalist here and just start bidding for doses.... screw everyone else. (That WAS sarcasm!!!). Of course, our elected representatives here and in Washington jumped the line at the very first opportunity. As if they were at all essential...
Jeez.
Posted by Kirk, Photographer/Writer at 15:53 15 comments: