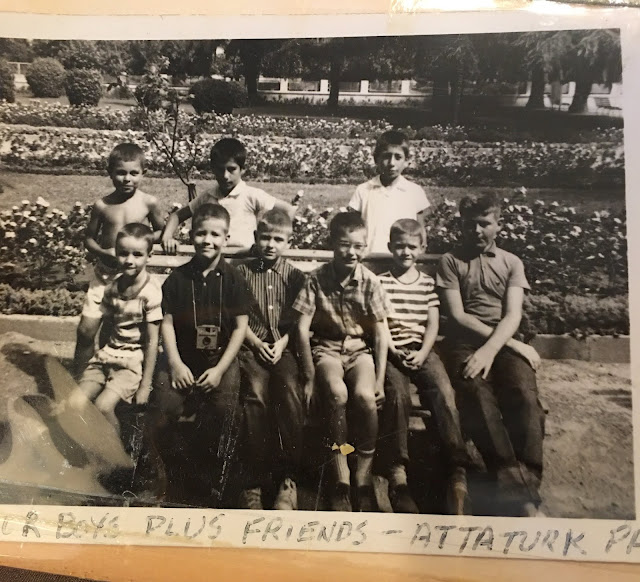 When we lived in downtown Adana, Turkey from 1963 to 1965 I made friends with a lot of Turkish kids my age. Every once in a while I'd go with them to their schools and try to keep up in Turkish and follow the lessons. At the time it seemed like a big deal to the Turkish guys to bring an American along with them.  I really enjoyed two years, immersed daily, in a different culture and far away from television, English language radio and our interesting culture.

This has to be the earliest photograph of me with a camera. The family had one camera and we shared it. I took it to school with me to make photographs of my friends and their teachers.

It was a very simple camera and, if I remember correctly, it took 126 film. I mostly got allocated rolls of Verichrome film (even though it has "chrome" in the name it was black and white) which was much cheaper to develop than color print film.

I'm the kid second from the left on the front row. The one with the camera.

Early indoctrination? Probably. I was in second or third grade when this was taken. That's a pretty early start...

Posted by Kirk Tuck, Photographer/Writer at 13:45

I believe that is an old Kodak Cresta camera. It offered 120 or 127 film depending the exact model. Kodak had more models than Carter had pills as the saying goes.

I grew up in the 60's in the Philippines and India with a gadget oriented dad who got me an Instamatic 50 in 1962 as my first camera. My brother and I preferred his Argus C-3 as it had more knobs, viewfinders and ways to get in trouble.

Most of my photos from the day were field trips and singularly uninteresting.

It was in India that I got more oriented to street photography as a teen (barely 13 in 1969). I wish I had spent more time thinking about it as I was very fortunate to see parts of the world that most never get to visit.

I still have photos from my Summer vacation that hit Kabul, Tehran and Beirut. I was a young idiot ( still an idiot but now on Medicare) but really enjoyed the countries and the food.

Two years in Southern Turkey in the 1960s? You've got to have some great stories to tell.

No photographer credit? ;) I guess it was a parental snap.

you haven't changed a bit

By the way, do you know that if one goes straight to “preview” after commenting it avoids the ‘captcha’? Not sure if that’s something that aids spammers — you may have to be ‘signed in’ for that to work.

I was in Adana - actually the AF base (Incerlik?) - several times around 1965 - 1967. I was flying on air evac flights flights out of Athens - the patients would be flown to Germany from there. I remember it as being extremely hot and on at least one trip unpleasant, because there was friction between US personnel/dependents, and some of the locals, We evacuated a woman that had been punched in the face by a man on the street because she didn't get out of his way fast enough. Not a pleasant memory.

There you are doing what started a career. Taking group photos, portraits, probably street photos. All Verichrome pan glorious black and white.

That was my film of choice (ha) when I was 9 years old and my very first camera, a Kodak Holiday Flash complete with flash attachment on the side of the camera. If I remember correctly it took 8 rectangular photos on 127 film.

I certainly took a different career path but happily photography has been a hobby since then.

I remember Incirlik AFB pretty well because we occasionally got evacuated from downtown to the base when the Greeks and Turks were going through especially aggressive "negotiations" with each other over Cyprus...

We lived across a large field from the American Consulate in a five story apartment building in the middle of downtown. We had the fifth floor. It seemed huge to me then but I was pretty young and I think most houses felt large to me then. It might seem odd now but I had more or less free range to roam through the city. I ate different foods off hand-pushed vendor carts, had good natured sling shot fights, drank out of garden hoses (we were supposed to be boiling or chlorinating our drinking water back then) and watched in horror as people slaughtered sheep in their family courtyards for special holidays.

Some of my best memories of childhood were of trips the family took far into the interior of the country in our old, silver Corvair station wagon. My dad had it shipped over from the U.S.A. We did NOT bring it back with us...

We were on a gravel road once, about an hour from anywhere when we hit a high, sharp rock in the rough road and punctured the gas tank. After we ran dry and the car stopped we, honest to God, fixed the small puncture with chewing gum and duct tape and made it back home.

Crusader castles on the coast. Russian flight incursions. SR-71s landing. Gypsy camps with my mom and her camera. Grown up discussions at dinner about atom bombs over at the base. Exciting stuff for a 2nd or 3rd grader with a model airplane collection. And a camera.

Lived in Ankara in 1st/2nd grades, then in Istanbul until mid-8th grade. This was all in the 1970s, probably the worst years in modern Turkish history with runaway inflation, the division of Cyprus and the accompanying war with Greece, the U.S. embargo, the revolution next door in Iran, and the near-daily killings of each other by right- and left-wing extremists (which is why some of the political rhetoric I hear here in the U.S. these days concerns me... but I digress), but none of that bothered me as I had a free range childhood, wandered the streets, played lots of pick up soccer, went fishing in the Bosphorus, and had a great time overall. We left in early 1980 when I was 13. The next time back was as a medic in the U.S. Army in the mid-80s, for a joint NATO exercise in the NW corner of the country (with a change of planes in Incirlik). Been back a handful of times since as a visitor, the last time ~ 10 years ago. Seems that Turkey had its best decade early in the 2000s, but it appears things have deteriorated again in the past decade. Too bad. But the memories - I would not trade them for anything. I only wish I had more photos from that time!
Ken

Isn't there an old saying, "Give me a boy and I'll give you the man" ?

How cool. It would be nice to hear more stories of Turkey.

I remember my first camera. It was the Kodak Disc Camera. It was a no brainer loading and unloading the film disc into the camera. The processed film negatives were returned in a disc as well if I remember correctly.