Two Friends Talking on the Phone. One Trying to Rationalize a New Camera and the Other Trying to Talk Him Out of Buying it. 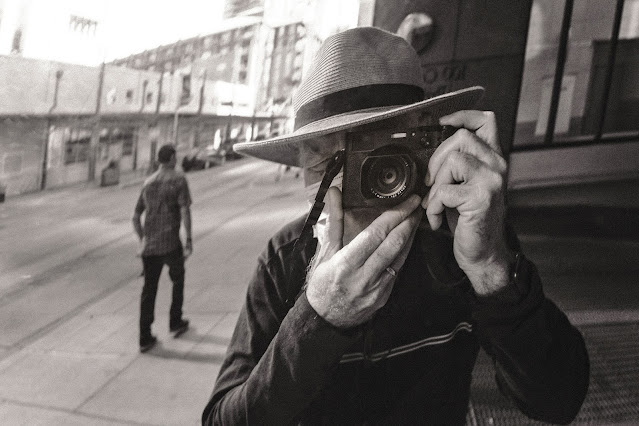 Long time readers of my blog can be forgiven for thinking I buy every camera I see or hold. I have been through an enormous number of cameras over the years and at times the ones I buy seem like irrational choices. I entertain the conceit that I'll figure out how to use them in my work as a professional photographer and will find a way to make each of them return more money into the coffers than the sum I yank out to buy them in the first place. Sometimes it actually works out that way while at other times the wheel of non-profitability just spin and spin. And my partner and my CPA just stand by shaking their heads. "Opportunity costs!" they say.

Given this you would think I'm the last guy any of my friends would call to get a "thumbs up" or a "thumbs down" on the wisdom of purchasing a new camera. I certainly would not depend on me to be a backstop for anyone else's reckless spending; especially not in the sweet and savory world of cameras. But in spite of my flagrant disregard for logic and common sense spending I still get a call every once in a while from a friend who is trying desperately to convince himself that it's a great idea to spend a large sum on something new.

I was sitting around the office on a gloomy and cloudy day last week when my phone rang, my computer also informed me of an incoming call, and my Apple watch piled on and notified me, physically and with an annoying sound, that I was being summoned to conversation by a caller. I looked at the caller I.D. and saw that it was one of my close friends.

We spent a few minutes talking about the GameStop affair over on Wall Street and we disparaged our elected leaders again, for a spell. Then he got down to business. He was calling to get my take about the idea of buying the new Fuji GFX 100S and "three or four of their better lenses." I suspect he wanted me to join him in an optimistic assessment of the future of commercial photography by agreeing that this new purchase would be a wonderful way to greet prosperous times ahead. It might just be the camera....

I didn't agree but there's a way to approach disagreeing with a purchase decision of a good friend and it's never the right thing to do to just laugh at his idea and denounce it out of hand. You have to go through the right process. It's a version of allowing one another to "save face."

My friend is no novice with cameras or photography. He's been working in the business as long as I have. He's owned more expensive MF systems and, in fact, just sold off a Fuji GFX 50R and a lens the week before. As I've never owned a Fuji medium format system he's got to be much more knowledgeable about the advantages and pitfalls of ownership than I am. So, no, he wasn't fishing for technical information; in a very understated way he was looking for tacit approval to pull out his favorite credit card and buy a new object, right now.

I started out by talking through the advantages of the new system with him. The amazing resolution. The reduced price compared to the previous model. The quality of the lenses Fuji is making for the system. And the idea of making this his primary system which, without a trace of irony, he says he could live with for the next ten years. At the end of this portion of our program we were both in agreement that the camera and the system was great and it would just make perfect sense for everyone to buy one and be done with camera shopping for a while.

At this point I threw in a "But......" And we proceeded to break down all the stuff we agreed to about the system's miraculous features and benefits but looking at them from a different angle. We started with resolution.

It's my belief that soon 90% of all our assignments will be to make photographs that are destined to be viewed and shown on monitors, TVs, and computer screens of all sizes. If we take that as a given then the two camera systems he currently owns, based around a Nikon Z7 and a Panasonic S1R, are certainly more than capable of far exceeding the potential of current media. Even if a client did want to use a photograph across a magazine spread in one of the most luxuriously printed magazines in the world either of his current systems would do a fine job. In a different way than my business he is lucky that most of his work is in the field of architecture. A subject that doesn't have to confront subject motion and doesn't impose the need for high ISOs with super low noise. Also, both of the systems he owns are among the top contenders for extended and useful dynamic range.

While the new Fuji sensor might exceed the single frame dynamic range of the sensor in the S1R the ability to use the S1R's hi-res, multi-shot feature is certainly an effective equalizer. Remember, he's photographing static buildings and interiors. Not moving models and never sports or outdoor adventure.

I reminded him that his desktop computer is nearing retirement age and, coupled with the slower hard drives he's been running for years, if he wants to take full advantage of the Fuji's full, raw 100 megapixel files he'll be spending a lot of time making coffee and playing Mind Craft as he waits for files to import and process.

This, of course, led us temporarily down the pathway of computer replacement as an alternate option. But he valiantly fought his way back to the original subject, tabling the computer upgrade as being something "uninteresting" to him.

We moved on to lenses and I asked him which lenses really stuck out to him. Which ones did he have targeted to buy with the GFX100S. He hemmed and hawed on this one for a bit since he works primarily (almost exclusively) as an architectural photographer and has spent years amassing arcane, wonderful and frightfully expensive tilt/shift and perspective control lenses for previous medium format systems (Leica and Hasselblad). In fact, he was already, at this early point in the Fuji GFX100S launch, investigating which adapters he could source to cobble his existing lenses onto the new system.

This led to a discussion of how he is working on stuff right now. Which lenses? What format? He admitted that he was working happily, and with a huge selection of lenses, in the 35mm digital camera ecosystem and had previously abandoned larger formats because of how kludgy they were to work with and how much cost and effort it was to marry the right lenses to the right cameras. The current Nikon and Panasonic cameras offered rich pools of lenses, adapted and otherwise, that worked well for him.

Next up we discussed how many of his clients were disappointed with his current format. How many were clamoring for more resolution, bigger files and higher fees? He admitted that his clients were already groaning under the sheer bulk of the finished Tiff and .PSD files he was already delivering. None had even hinted at any need for technical improvements. If anything they were begging for more manageable file sizes.

At this point I thought I had _________ on the ropes. I thought, for his own financial good, I'd shut down this discussion with the old "one-two" punch. I asked him why, after skating through at least as many cameras and systems as I have in the last 20 years he had any conviction that he'd settle in on this particular system to spend the next ten years with. And I followed up with, "I don't know about you but my business is way, way down and looking ahead for the rest of the year I really don't see it getting much better. How about you?"

He admitted that, like me, he'd just done a handful of smaller projects over the last several quarters and the work calendar for 2021 was currently sparsely populated. We commiserated about the lack of work for a bit (a common topic for most photographer I meet with these days) and I thought we'd pretty much worked through the reason why I would "keep my powder dry." I also asked, "What if you buy the system now and don't have much opportunity to work with it for 2021 and then, just as work picks up Phase One drops the price of their 100 MP sensor camera, which has a much, much bigger (dimensions) sensor, and you have to scramble to sell the Fuji (at a loss) to grab onto the Phase One?" Could that be a thing?

Like a self-help life coach I tossed in one more thing. "If you have a spare $12,000 hanging around burning a hole in your pocket why not wait till the stock market drops 10% and stick that cash into an index fund? The way the market has grown in the last six years you might find that instead of losing money on a depreciating camera you end up with enough new, free money to pull enough out of your investment to pay for a newer, better camera."

He thought that sounded pretty good. We wished each other's families well and then ended the call. As I walked into my house I thought, "Wow. That sounded pretty good. Maybe _______ will take my advice and save some more cash. Then I patted myself on the back and told myself that I sounded so wise. I might even want to start taking my own advice!

But by the time I got back to the office and checked my phone I had already gotten a text. It read: "I always enjoy our chats. Thanks for your point of view. I pre-ordered the camera and just a couple lenses from XXXXXXX. Who are you going to order yours from?"

Posted by Kirk, Photographer/Writer at 16:24 11 comments: