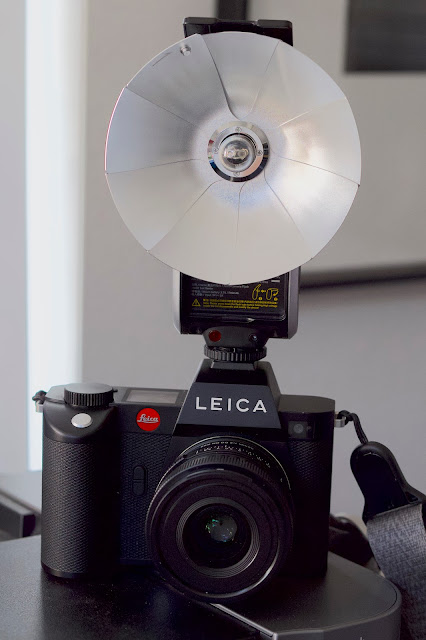 I wrote the other day that I liked flashes that featured the older, "automatic" settings which use a sensor on the flash to measure exposure. My luck with TTL flash has mostly been hit or miss. My keeper rate when using manual flash has always been much higher. And when I'm doing quick P.R. or event work I tend to work almost always in manual. But in my experience "automatic" modes are somewhere right in the middle of the mix. Not always perfect but usually closer to the "right" exposure than TTL even if it's not as good as a well tested manual setting.

TTL flash fans will probably jump in to say that with high dynamic range cameras and flexible RAW files they've never had an issue with TTL and can quickly fix photos in post. Sure, I can fix a few dozen under exposed flash pictures in post but I sure don't want to go through four or five hundred photos, correcting each one for over and underexposures. Not if I can help it...

With fully manual flash exposure you are basically just solving simple math. Guide numbers work well. If the flash puts out a certain amount of power and you are a certain distance from your subject you can shoot hundreds of frames with little or no variation in flash output or exposure. Much easier to batch process after the shoot.

So why Automatic? Because at heart I'm pretty lazy and wish the flash would do most of the work. With this in mind and with the prices of Leica dedicated TTL flashes equal to an international airfare I decided to give a new, funny looking flash a try. It clicked two boxes: It's intriguing and it's relatively cheap. $119.

The flash is a Godox Lux Senior and it folds down for travel but when you are ready to use it you engage the circular, metal reflector by fanning it out, pop up the flash tube and you are ready to shoot. It's not an exceptionally powerful flash but I intend to use mine on camera and direct. There is only one way to bounce this flash and that's to use the included sync cord and take the flash off camera and point it up toward the ceiling. Not interested in that for the uses I have in mind...

I got two of these yesterday and took five minutes to read the instruction manual. It's pretty straightforward since there are no custom functions or extra "features" to screw up your progress toward simple lighting. The units come with internal, non-interchangeable lithium batteries which are charged via an included USB cable. I've only opened up the box and charged one of the two units. It took about three and a half hours to hit a full charge.

When the flash is plugged into a USB charger and starts charging the ready light on the back lights up red. When charging is complete the same light switches to green. If you use the flash for a while and want to check and see how much battery power you have left you can turn off the flash and "quick touch" the test button/ready light button once and you'll get a slow flashing series of indicators. Four green pulses tells you that the flash is at 75-100% charged, three pulses tells you that the flash battery is at 50-75% charged and so on. It's not as accurate as a numerical indication (ex: 73 %) but it does let you know in a more general way how you're doing on battery juice.

The automatic feature is primitive but straightforward and easy enough to use. It's based around an exposure within 4 meters from the direct flash. The manual tells us that it's calibrated for correct exposure in that range when used at ISO 100 and f2.8. It takes no great math skills to understand that you could also set ISO 200 and f4.0 or 400 and f5.6 or 800 and f8.0. I tried all of these combinations using the flash on a Leica SL2 and they all worked just fine. I've only taken 20 or 30 test shots but they are exactly what I was expecting. Since the flash and camera don't communicate at all (other than to trigger the flash) you can "drag" the shutter as slow as you'd like to balance out ambient light and flash ratios.

I like Godox products. I've purchased many over the years and have yet to regret any purchase. I was hesitant to buy this wonderfully nostalgically designed unit for only one reason; I want to use the flash for a fundraising gala one of my clients puts on every year at the Four Seasons Hotel. I normally shoot between 500 and 600 candid shots during the cocktail hour, the VIP reception, and with casual groupings after the show concludes. I have no fears whatsoever about shooting direct flash but I do have a well grounded fear of running out of battery charge.

I almost passed on the Lux Senior since the battery is built in and can't be exchanged during an evening shoot. But then I looked again at the price ($119, free shipping) and realized that I could buy two of the them, set them up identically, and be covered for the full event. Being extra cautious I'll bring along a USB Anker battery pack in case I want to put the first, exhausted unit on to charge in order to continue to have a back-up source. And being incredibly paranoid I'm sure to have a manual Godox YN-XXX flash in the bag, sitting in the corner of the ballroom, just in case everything else goes to hell.

So far the flash is working perfectly and I like the general look of the light coming off the round reflector.

I can't wait to hear the comments from the photo aficionados at the gala. The nostalgia factor is palpable.

Taking the flash with me on a walk today to see if I can do some fill light out in the bright sun. The SL2 syncs at 1/250th so we'll see what we can get. And no. There is no HSS on this flash.

Posted by Kirk, Photographer/Writer at 10:27

I want to see what the highlights in subject's eyes look like when shot with that flash. I never really understood the appeal of ring-shaped lights, because I always thought the annular reflections were distracting, and not in a good way.

How easy is it to control proportion of light from strobe vs ambient?

As to the ratio control, as with any flash used in manual, you can dial the shutter speed on the camera up or down to control the ratio. Or, alternately you can use the flash's power control to increase or decrease the power from 1/16th to full power and control ratio like that. I prefer controlling the ratio via shutter speed as there is more range of control.

One other advantage of auto flashes on mirrorless. Because the exposure, including flash, is read off the camera sensor and not a dedicated one, like in a DSLR, TTL is a bit more likely to underexpose the flash in strongly backlit situations. I've experienced this on almost every mirrorless camera I've owned and as a wedding photographer it often drove me nuts.

That's why I kept an old SF58 for my SL's and SL2's even after the generally better SF 60 was released.

i got a kenro miniflash in the sales this year, which I've been having fun with, has all manner of features like strobe but is fairly lightweight, comes in all flavours (camera brand flavours)

It's a neat looking flash Kirk. Looking forward to seeing the results of it.

Wow, what a flashback to the days of old. Your new flash reminds me of the 1950's, 60's. I still use my Vivitar 285 HV it works great. I find it interesting how we can still do the math in a head for manual flash faster than setting up a TTL flash.

Have a good one
Roger

Thanks Roger, I was regretting getting rid of m box full of Vivitar 285s but now that I've found these I'm feeling better.

It's like finding the right pair of swim goggles.

The last flash I bought and used semi-regularly was... a Vivitar 283. Which I used on and off again with my Pentax MX's. I know, this dates me. But, truth be told, I simply haven't been interested in flashes for... for quite a long time. Reading your cool post on the Senior Lux however is pulling me dangerously close to dipping my toes in the sometimes muddy, sometimes crystal clear, waters of the flash universe. And, okay, I'll confess: I don't really need one. But DAMN, it sure looks cool.

Like your other commenters, I'm looking forwards to seeing some of your results with it. I'm quite curious now.
(Though, curiosity can be a dangerous thing. Last time I succumbed to it, an X-Pro3 appeared on my doorstep. A lovely camera and, thanks to the imagination of the mad scientists who disguise themselves as Fujifilm color science engineers, the digital camera with the most beguiling color capabilities I had ever used. Fortunately, the curiosity subsided, and the X-Pro3 has moved on, replaced by a more compact X-T3 which, to my delight, is proving to be equally beguiling with the geological layers of adjustable color magic that those aforementioned mad scientists baked into its strata as well.)

I kinda miss flashbulbs that go POP and emit a little tendril of smoke.

Me too! I even am nostalgic for flash cubes....

Good Sunday Morning
Beautiful morning here in Portland, it will be 82 today and no rain!! Yes!! More time to clean up the property, paint 2 barns, cut, and haul a couple cords of firewood that fell down in last winter's storms.

Yesterday was a great day as my younger son texted me, and his brother ( his brother was a little little upset as he was on call for the hospital, but all was well) at 12:15 Friday night/Saturday morning to see if we were able to meet in Salem Oregon for a Camera Swap Meet on Saturday at 10:00? Sense Salem is only an hour away I left at 0800 to get there early, you know for the good bargains, we left 3 hours later with a Fuji ST701, 3 Fuji screw mount lenses, 2 bulk film loaders, 1 Vivitar zoom, and a Yashica Electro 35 for a total price of $102.00 then off to lunch. Wonderful Day, just Stellar.

Now onto your new flash. A friend, and I were talk, saying, wondering if you could use a white surgical hair net over the front for a softer effect if you so desired.