Packing up for the last shoot of the year and wistfully thinking about donuts. And vacation. 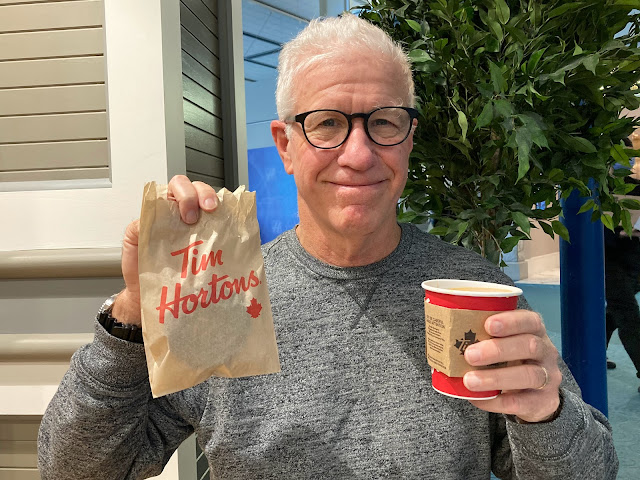 I say that tomorrow's shoot will be the last one of the year but it never really happens that way. People get panicky when they realize that they haven't spent their budgets for the year and crazy things happen. I'd really like to get everything wrapped up this week and just take a month or so of solid downtime. I'd spend a good part of the time in the pool and on the trails but I'd also like to spend more time in some of Texas' great state parks. Or on some sort of photographic field trip to someplace interesting. Someplace I've never been to before.

But first there is tomorrow. It's going to be an unusual day. One of the advertising/P.R. agencies I enjoy working with is using the occasion of an "all hands meeting" and their holiday party to multi-task with their favorite photographer. A catch-all for the end of the year.

I can't get Tim Horton's donuts tomorrow morning so I'll settle for some Pumpkin Spice waffles and some really good coffee at home. Then it'll be time to load up the car and get moving. There's not too much gear to pack and carry; just enough to get a bunch of mini-jobs done during the course of the day. It's kind of crazy to realize the sheer amount of packing and unpacking I've done over the last ten days to two weeks. And since every job is a bit different so is the daily load out.

When I arrive at my client's H.Q. the first thing I'll do is set up a white seamless background and some lights in their small video studio. It's upstairs and I'm kind of lazy so I'm bringing small lights. Less to carry up and down the stairway. I'll be setting up to photograph 10 to 15 headshots that will join about 25 previous headshots on the company website. We've been photographing the people against white and dropping in well considered backgrounds we've shot around downtown. The small range of backgrounds provides the overall continuity.

I'm planning on bouncing two Godox AD200Pro electronic flashes off the ceiling and adding a small reflector near the camera to bounce light into people's faces. These lights are so much smaller and lighter than my traditional monolights and faster to set up and use as well. I'm scheduled to shoot the portraits from 11:30 till 12:30 or 12:45 and then we strike that set and haul the two lights outside to set up for a group shot of 40-45 people right at 1:00 p.m.

Those are the two set-ups I'm sure about and the rest is up in the air. I know we have a bunch of speakers who will be addressing the group in an adjacent conference space and I'm sure we'll get photos of them. There's an awards ceremony and a dinner as well, and then a party afterwards. The portraits and the group shot are the key things I've got to get right and the rest is catch as catch can.  aka: optional.

I'm currently charging batteries for three different on camera-style flashes. One is the Godox V1 which is dedicated for Olympus and Panasonic interfaces (but not current Leicas!!!). One is the Godox TT685 which is also O/P dedicated and then there is a tiny Godox TT350 which is also set up for O and P. All three work well with the Panasonic S5 so that will be my primary camera for the day. These flashes are all intended to enable me to light all the non-setup social photography that happens after the group shot. But only used one at a time...

Interesting that when I look through my tool bag of on-camera flashes every single one of them is a Godox model. Even my 400 watt second monolights (not accompanying us tomorrow) come from the same company. I've accrued this stuff over the years and the sad truth of it is I keep coming back to this brand because the camera maker's branded flashes are less reliable. And are too feature laden. At least that's what I've found in practice.

There are three lenses being packed for the S5 system. The 24-105mm S Panasonic lens is my all arounder.

It's lightweight relative to the Leica 24-90mm and has more effective image stabilization; especially when used in tandem with the S5's in-body stabilization. It covers a great range of focal lengths as well. Next up I have the Sigma 35mm f2.0  Contemporary which has worked well for me when using flash in dimly lit rooms. The extra aperture capability makes it easier for the camera to focus and nowadays I am not above turning on the AF-Assist lights as well. The final lens is the Sigma 65mm f2.0 just because I'm currently infatuated with it and want to use it for everything --- even when I know I shouldn't.

Since the Leicas don't work in TTL or Auto with my collection of flashes I chose an interesting sub-system as a back up for my long day on location instead. I'm bringing along my trusty Panasonic G9 paired with the Panasonic/Leica 12-60mm zoom and, just for kicks, the Olympus 150mm  75mm f1.8.

I might use the latter lens if I'm called on to make photos of a speaker at a far off podium...

Except for the fact that the two cameras don't share lenses the G9 is a good choice because the menus are so familiar to me. The flashes work exactly the same across the two systems. And, finally, because both cameras can use exactly that same batteries, which are plentiful around here. That alone is a source of great joy for me!

All the cameras, lenses and batteries go in an Airport Essentials backpack. All of the flash gear goes in a Gitzo photo backpack and the light stands and background gear get stuffed into a stand bag. The goal is to be able to carry all three containers up and down stairs and between the two locations which are located about 200 yards apart, by myself. That should be enough exercise for tomorrow, right?

There's not much stress surrounding this particular shoot. The agency, from the owner down to the production people, is filled with old friends, collaborators and congenial clients. There's not much here to stress about. Group shots tend to fall together on their own and we've logged hundreds and hundreds of portrait shoots for this firm. We know and they know what to expect and they also know there's not much here we couldn't reshoot if we had to....

But I don't want to get cocky so I'm bringing back-ups for everything and going through the checklists as I pack. Doing the job by the numbers. Checkmarks required. I'm even tossing two SD cards in each camera and setting them up for redundant backup. I might even shoot in the raw format!

So, by the end of the shoot I will have photographed over the course of the last week: multiple attorneys at various locations in their downtown offices, about 20 accountants in environmental portraits around their offices, one oral surgeon whose name I had to "embroider" onto his white doctor's coat via PhotoShop, several intricate piece of cutting edge medical gear, four models doing medical lifestyle stuff, and a couple of portraits in the studio for friends.

And I will have spent far too much time sitting in front of the computer trying to wring the best looking images I could make out of the best shots from thousands of files. And not nearly enough time walking aimlessly downtown with some odd camera.

And, with that in mind I'll end this post, grab a Sigma fp, put a 50mm lens on the front and go out to shoot some random black and white images of downtown Austin as it gets ready, in its own way, to celebrate the holidays.

Posted by Kirk, Photographer/Writer at 14:37

Ah yes Tim Hortons, the unofficial symbol of Canada. And like all things Canadian it's not even owned by a Canadian company.

Glad to see you are heading out of 2022 with a bang. On top of that with nice, almost family like, clients.

I with I could make a case for buying an S5. I love my GH5 and the other three Panasonic cameras I have.

I'm looking forward to more landscape photos of Texas from you. At least I know you won't be trying to plug Ansel Adams' tripod holes! Or making idiotic comparisons between music and your images. Of the old masters, Edward Weston was my favourite.

Say hi to B from Erna and I.

It is very interesting to see your thinking in planning for these types of events. Thank you.

I get the impression that almost all the recent client work you have spoken about has been still images rather than video. If that is not a misperception, I wonder if it is due to you choosing not to bid on video work, a general change in the mix of demand in the market, or just a consequence of your particular set of clients.

Got bored with all the post production in video and really stopped accepting assignments. More fun to do photos. Shoot one day, post process the next, bill and you're done. Able to do more assignments for more money than I would make sitting around editing again and again.

Looking very comfortable as a Canadian there Kirk.

I'm sure the client, who knows you very well by now, appreciates that even though you could probably just pack a couple of cameras & lights and show up to do a good job, that you make the effort to prepare to 'get it right' the first time, in spite of the familiarity. Speaks to your commitment to deliver a quality product regardless of the client. Kudos.
Also, I enjoy reading how you prepare. Even though I'm in a different industry, it helps me think of things that shouldn't go wrong but might. Thanks.

pixtorial, You are right. I just made the focal length leap unconsciously. I'll change it in the copy. Thanks for catching that.

And....I've never actually banned anyone in the 10 years I've been blogging. I would probably have done so if I could have figured it out but it sure would not have been you!