Sometimes everything comes together just right. 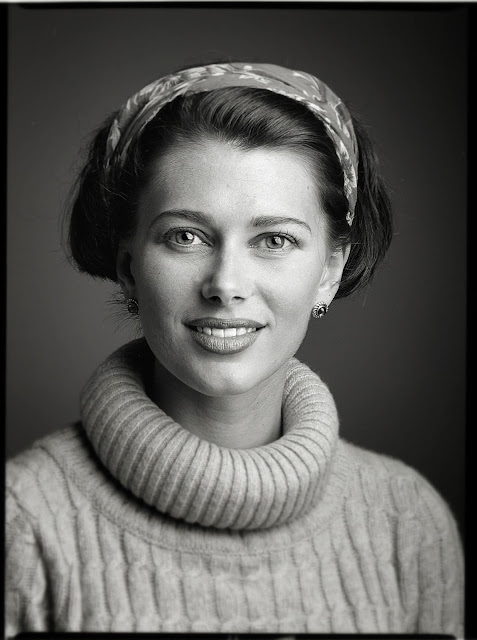 Sometimes everything comes together just right. It was a cold and rainy day when Michele and I made this image. I was in the downtown studio and we could hear rain and sleet rattle against the window outside. The studio was very large. I was able to put the background as far away as I wanted and still have room to stand back and use the perfect focal length lens.

The main light was a 54 by 72 inch softbox over to the right. About 45 degrees of center and up enough so that the bottom of the box was high enough to cast a shadow under her chin. There was a white fill card somewhere to the left of the camera but not very close in. The ceiling was 18 feet high and painted matte black. The background was a gray seamless paper and it was lit with  one flash head modified with a broad grid.

We worked casually then. There was no make up person or stylist. No assistants lurking in the shadows. Just a model and a photographer.

For some of the shoot I used an old Rollei twin lens but for this image I switched to a Pentax 645 camera and one of the inexpensive 150mm f3.5 lenses Pentax made. The focal length with this film format was near the 95-105mm that I think makes portrait subjects look best.

At some time after this shoot I bought a Marty Forscher Polaroid back (with a fiber optics bundle that positioned the focus in the correct plane) but on the day this was shot I just used a handy light meter in its incident (as God intended) mode.

I never printed this particular negative but today I was sorting out envelopes in a filing cabinet while also trying to pay attention to some enormously detailed conversation on the phone with an art director. That's when I found about twelve pages of these negatives.

I scanned them in the good, ole Epson V500 Photo flatbed scanner in the nothing special required setting, followed by a few minutes in Photoshop to knock the dust spots off and....ta da. My favorite photo of the month.  One of my long term goals? More like this.

Posted by Kirk Tuck, Photographer/Writer at 16:49

Wonderful. Thanks for sharing.

The great thing about portrait art is that the lens doesn't have to be technically perfect, in fact a little softness is sometimes flattering to the Subject. My mentor Steve Brown once told me, "carefully focus, then kick the tripod." I know what he means. This example you present is focused perfectly in my opinion. Only select areas are in sharp focus, and the result is a rather flattering portrait of Michele. Thanks for sharing.

Lovely portrait. Draws you in and the model is stunning as well.

Out of all the many beautiful women you've shown us Kirk, Michele is my favorite. My goodness, she's gorgeous!

You've posted some wonderful portraits over the years, but there is something special about this one. I can't believe you haven't printed this.

she is my favorite model as well! i love every photo you have shown of her!

This one immediately caught my eye. Yes, it certainly all came together here.

Kirk, what B & W film do you prefer? Do you you recall what you used for this, it's perfect. Great shot.

I used to use a lot of the Agfapan APX films but they're gone. My favorites now are Tri-X and Fuji Neopan 100.

You should add this one to your 500px gallery.