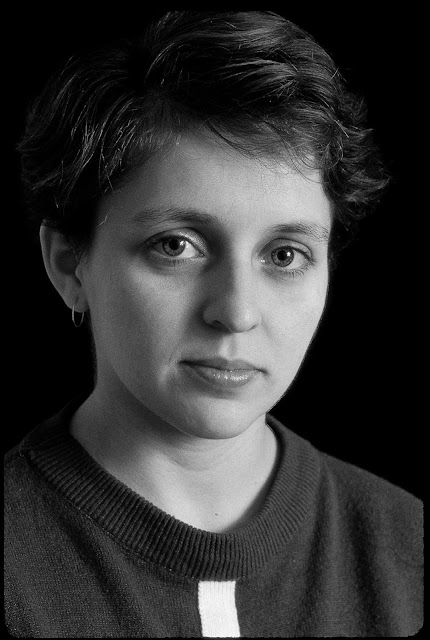 I get lots of e-mail asking me to talk about tricky lighting with multiple, radio slaved flashes but the reality is that I prefer simple, one light set ups for most stuff.  And most of my personal portraits are lit by only two lights and a reflector. I think there is something valuable about mastering one or two lights before even considering all the tricky and blingy lighting set ups one sees on the web or in books the raison d' étre of which is to sell glorified lighting diagrams.

One umbrella. One light. One small reflector. Old, black and white film shot.

Posted by Kirk, Photographer/Writer at 19:23 2 comments: 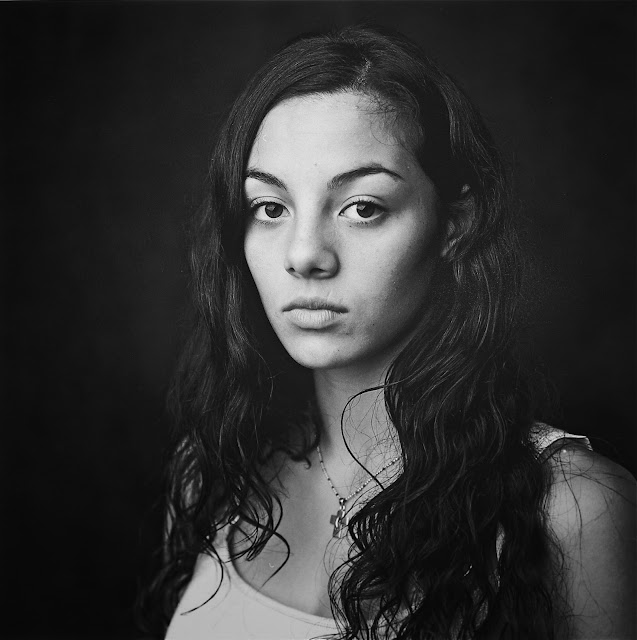 This young woman came to my studio with her older sister. An advertising friend of mine thought the older sister was a wonderful beauty and needed to be photographed. I disagreed. I understood at that moment how subjective human understanding of beauty could be.
Posted by Kirk, Photographer/Writer at 15:49 7 comments:

Fall in Austin. Back when it used to get cold. 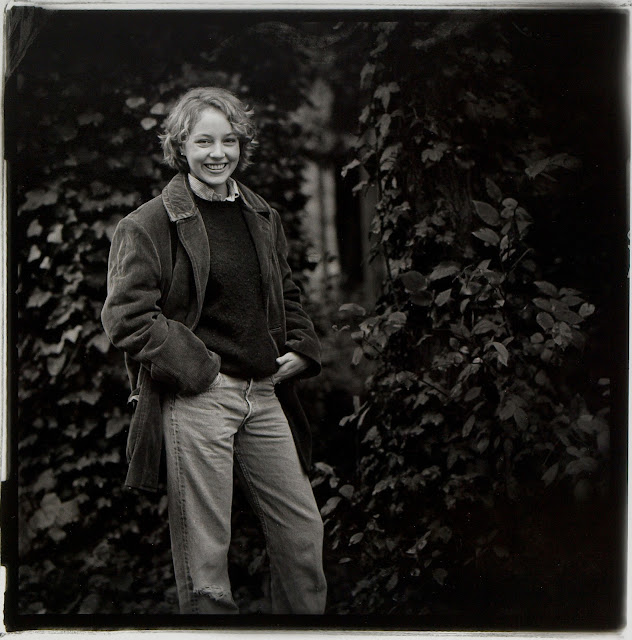 I re-read the interview with Dennis Darling this morning. I agree with the most important part. The only interesting photographers are the curious ones. Not curious about how the gear works but curious about how memory, people and  sensibilities work. That interview is a self contained workshop on how to be creative.
Posted by Kirk, Photographer/Writer at 15:43 2 comments:

I've spent two evenings at the theater this week. Both times I was watching RAGTIME in the new, Topfer Theatre building. It's a brand new 400 seat theater that's pretty much state of the art. Beautifully design, great bars, and a large percentage of the stage lighting is done with state of the art LED lighting fixtures. For those of you who've never seen RAGTIME it's a play set at the beginning of the 20th century in the United States and it deals with issues of racism, how Americans at the time dealt with immigration from nearly everywhere and, issues of personal morality and our responsibility to our fellow humans. The play is held together with eerily beautiful Ragtime music. Enough about content of the play, I want to write about shooting in the new space.  It's going to be challenging and I'm still coping with all the changes but that's what makes this career so much fun. Just when I get everything figured out for shooting on a small and intimate space we get to change gears and shoot BIG.

Since RAGTIME is an enormous production we were tight on schedule. The costumes and scenery weren't quite finished for our usual dress rehearsal and marketing wanted to ramp up attendance quickly. Both nights I attended there was an audience in the house which meant that I didn't the usual leisure of moving around to get the best angles and elevations. It also meant that I couldn't work in close to the stage as I have for years at the other two theaters.

I went the first night without a camera in order to concentrate on the run of the play. It was like scouting. I wanted to see where the lighting cues came in. What the action and choreography looked like. How the stage was blocked out. I did discover two interesting things that would affect my photography.  One is that most of the stage lighting was set as approximately a 3700k color temperature but the follow spots were set up as daylight fixtures. This meant that there would be a  color split depending on which light sources had dominance. I would have to set two different color balances and then be able to "see" the changes and to toggle between the two color settings.

I also learned that being stationary during the show is a whole new way of doing the work. I had to rely on the long end of my long zoom in order to get the shots I needed for most of the show. My observations on the first night let me know where the "ta-da" moments were in the play and allowed me to be ready for them on the next night.

When I came back to do the actual photography I was positioned in the center of the house about 26 rows up from the stage. There's a break between seat rows there.  Unusual for me since I've been shooting at stage level or actor eye level for most of my previous work.

What I figured out in my scouting was that the majority of stuff I wanted to capture, shots of one two and three people together in a scene, or small groups, would require long lens and enough ISO to lift up the shutter speeds to something higher that I was used to using. I did most of the tight shots with a 70-200mm 2.8G lens on the front of a Sony a57 (supposedly better high ISO performance than the a77...) All the wide, stage and scenery shots as well as shots of the entire cast on stage at one time were done with the 16-50mm 2.8 Sony lens on an a77 body.

I set both bodies up with two different color temperature/wb settings. As soon as I noticed the faces turning blue or cyan in the electronic viewfinder (yes, that's one of the fringe benefits of the EVF, real time color analysis!) I could hit the function button on the taking camera and then toggle to the needed setting.

Since I was trying to capture action, expression and movement I decided I needed to shoot a lot. How much is a lot? I ended up with around 1800 shots over the course of the three hour show. This meant I needed to be shooting Jpegs or there would be no way to edit, process and convert the files in time for the marketing department's deadlines. It also meant that I really had to nail the changes in color since I'd have a limited opportunity to make color shifts in post. The majority of images were shot in the a57 camera which did 1200 shots on one battery while still showing 41% power remaining at the end of the evening. So much for the hit against Sony on battery life...

There was a non-revenue audience in this particular run through but the electronic first curtain shutter of the Sony cameras, and the lack of a moving mirror, makes the Sony camera quiet enough to use unless you are seated directly next to or directly in front or behind someone. On the mezzanine row I was far enough in front and behind the other rows that the camera was mostly inaudible.

What have I learned or re-learned? First, the obvious. If you are shooting from further away with a longer lens you flatten out the scene and you lose a lot of intimacy in the images. There's a reason why  world class photo journalist and street artists use shorter lenses and work close in. It makes for a more emotionally exciting image. Really.

Secondly, even though the Sony 70-200mm 2.8 is a really nice optic and the cameras have built in image stabilization I was at the outside limit of my ability to hold the lens steady enough at anything longer than around 1/500th of a second. 200mm on a cropped frame camera is the eq. of a 300mm camera on a full frame camera and, at the longest focal length, every subject and camera movement is amplified.  And not in a good way.  Next time I shoot at this venue I'll try to shoot much closer. In fact, if we can do a closed house dress rehearsal I'd want to stand on stage and shoot with a collection of much faster single focal length lenses. The longest I would need in that scenario would be the 85mm and that's a whole different ballgame when it comes to lens speed/subject movement/ISO compromises.

In the final processing I could see some issues from camera movement in dark scenes. But I have mixed feelings about changing the mix in the camera bag. I could go with the new Sony a99 but then I'd lose about 100mm of effective reach which would necessitate buying longer lenses. If I use a longer single length lens I'll be switching back and forth to other cameras as the scenes change in order to get the framing I need for each shot. It's a bizarre compromise and one that I'll ponder for the rest of the week.

The theater is beautiful and the range of new stagecraft that's been made possible is breathtaking. I just need a few years of practice to lock in a new way of working with the dimensions and layout of the new space and everything will be groovy.  Photos below. 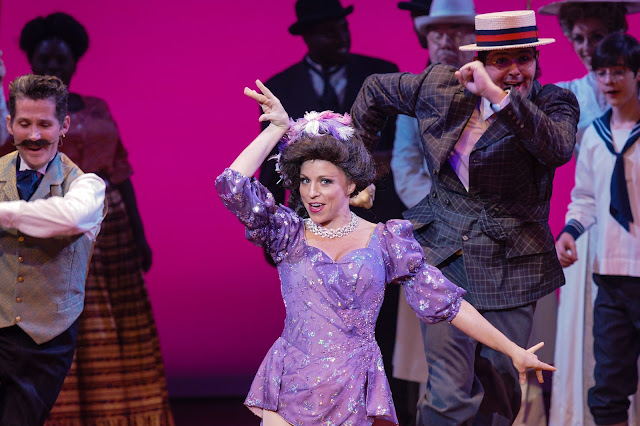 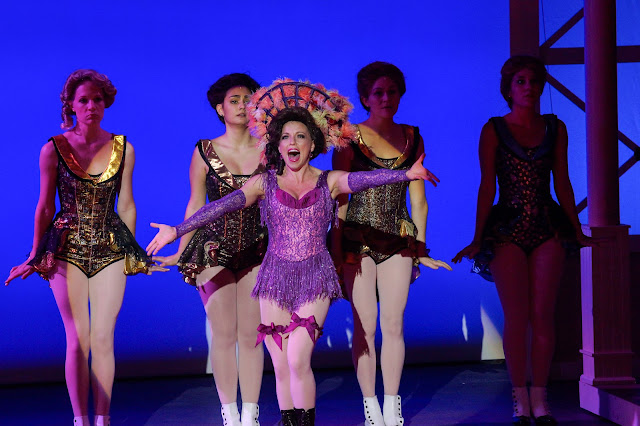 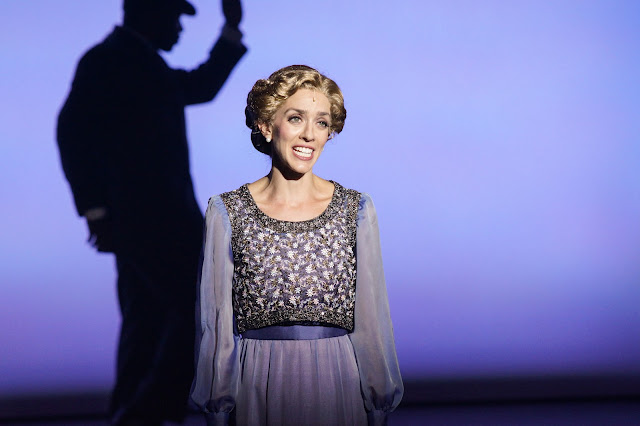 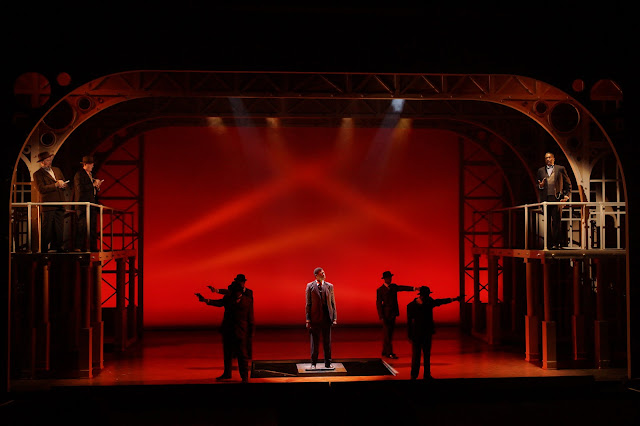 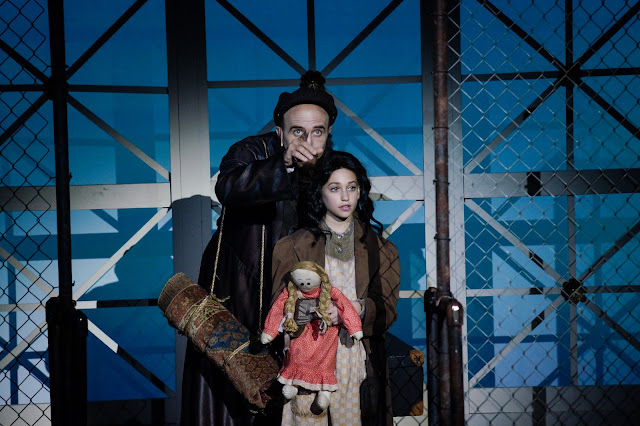 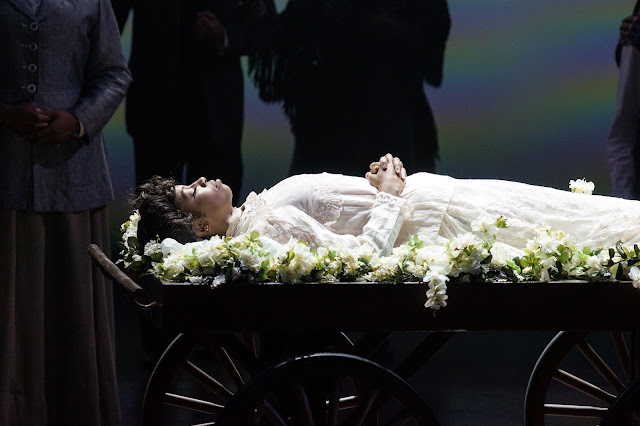 Posted by Kirk, Photographer/Writer at 15:07 7 comments: