My Most Amazing "Find" in the entire PhotoPlus Expo in New York this week was..... 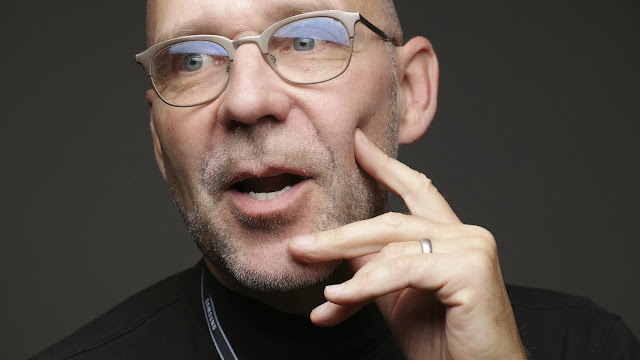 photographed at the Samsung booth with the Samsung Galaxy NX Android camera and the (incredibly good and drool-worthy) 60mm f2.8 macro Samsung lens.

I didn't know what to expect. Nick and I were thrown together by the public relations agency. But I quickly came to understand that I had been given a really nice gift.

We were in NYC to promote the new camera which we've both been using for a while. I got to the Javits Center quite early the first day but Nick was there before me. He was fine tuning lights and getting stuff ready. He's tall, thin, wiry, happy and intense all at once. And smart. I liked him from the moment we shook hands.

At 60 Nick has been living photography nonstop since his early teen age years. He is masterful with people. He's the kind of guy who does a quick demo for an eager crowd, makes amazing work look easy, and then he literally wades into the crowd asking, offering and inviting people to come up and shoot the camera for themselves. He helps them get oriented. He guides them gently.  He makes them feel comfortable, smarter and more courageous and by the time they hand the camera back to Nick they feel like they've made a friend and learned from a wise mentor. And for a short spurt, they have.

Nick went on first of the first day of the show and I stood by and watched and I learned more about lighting and posing portraits in a short, concentrated burst than I have in years. I like tripods, Nick tossed his away. I like to be in control. Nick likes to collaborate. But he never relinquishes the artist's final say.

By the end of the three day show I felt as though I'd made a friend for life. We're already planning future projects and I came home encouraged, inspired and buoyed up by his example. Wow.

I thought I would be enthralled by the new cameras or the new lights at the show. I had no idea the best feature of the show was the guy I shared the Samsung demo stage with...

Posted by Kirk Tuck, Photographer/Writer at 12:37

Some great work on his site. So I decided to RSS-link his blog. Thanks for the URLs Kirk!

It doesn't surprise me that the most-interesting part of your trip was another photographer rather than a piece of gear, however awesome that piece of gear may be. I think it is an extension of the idea that it's not the gear that makes a photo good, but rather the photographer.

I'll also extend the above idea by suggesting that I, and other readers of this blog, have gotten far more out of seeing and reading a few posts about how you make great photos than we would get out of reading hundreds of equipment reviews. I've stopped reading several review sites in the past few years, and concentrated on reading sites made for photographers by photographers such as you, Robin Wong, and Mike Johnston. These are the real places to learn and be inspired to take better photos.

Tom Judd, I loved your comment but I accidentally lost it. Would you be kind enough to repost it so I can get it onto the blog? I am happy you were able to experience Nick's studio side manner. What fun!

Wow, let's see if I can remember. I was watching you work with the model, enjoying how you included her in the process. And Nick saw me and came over to talk and show me the camera. I can see why you felt an instant connection with him, and can see why you two worked so well together. The two of you were so different from other booths where the poor models just sat there, bored and uninvolved. Sometimes the best lessons can be learned just by watching.

Thanks Tom. I really appreciate it.

I don't know if anyone does "photography for nonphotographers" better than Nick. For years, I've been giving away copies of his "How to Photograph Your Baby" to new-parent friends.

Nick's books were a revelation to me in the clarity and simplicity of making much better photos.