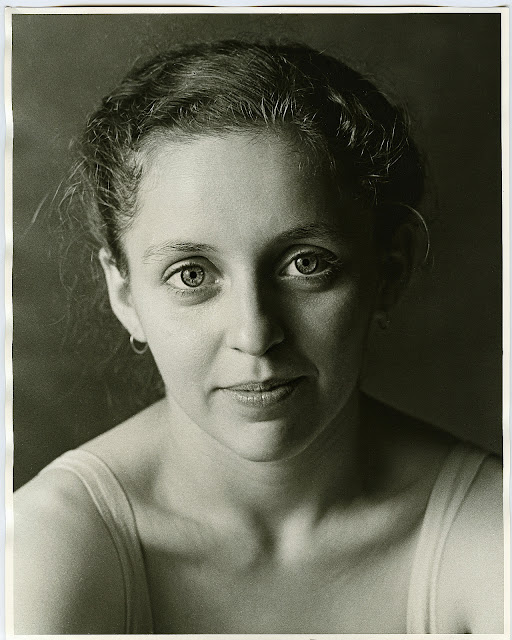 I think the big difference between photography now and photography in the "good old days" of film and printing paper can be found in the sheer investment and risk of the former. While in the days of magical cellphones and instant uploads to sharing sites we have almost zero investment in creating images the days of yore demanded a whole different level of attention and intention on the part of the artist.

This print, above, is from my earliest days as an amateur photographer with a light. I had one flash and a umbrella of some sort. There were no screens to tell you if you got stuff right or if you totally fucked up everything from exposure to flash sync to focus. If you were a poor student with a very small budget you probably developed your own film, which was also fraught with peril. Did you get the temperatures of the chemicals right? Did you agitate the developing tank correctly? Did you dip your film in Photo Flo and distilled water in just the right way to keep the negatives from streaking? Did you dry your film in some area that was relatively dust free? There were never any guarantees in the process and if you did mess up you'd only find out about your mis-steps days or even weeks later. Long after the statute of re-shootablity had expired....

And none of this takes into consideration that learning to print well continues to be a multi-year experience. I got lucky with the print above. I got it with a relatively small investment of test prints and test strips. But to get to this one image there was, for me, a profound investment in time, money and learning curve. There was required investment to even get something so simple and singular. Maybe that's why the end results were so precious to use back then. In a sense we were creating a permanent artifact of our memory and our way of seeing. Not a consumable meant as Facebook candy.

Maybe that is why so many older and more experience photographers have such a hard time letting go of an idea of photography.  We hold onto the idea of enduring artifacts that had intrinsic value based on our investments of time and skill. Now, for the most part, we're engaged in a process that's not much different than creating a beautiful and tasty main course for a fine dinner. We might fuss a bit and throw in some lighting and post production but in the end we know that the product is more transient. More....consumable. And we get the sense that we need to increase the output to feed that gaping maw of social sharing. If we want to somehow remain relevant.  It's a whole different medium by dint of its use.

The moment that hooked most of us back in 1978 was the moment that your first decent print started forming in a tray of developer under the soft, dim glow of the red safe lights with a little transistor radio humming away in the background. When Belinda's eyes started to come up in the print. That's the moment I decided that I was "all  in."

Posted by Kirk, Photographer/Writer at 10:47 14 comments:

Are they "street photographs" or are they portraits taken on the street? 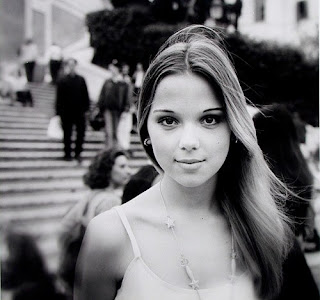 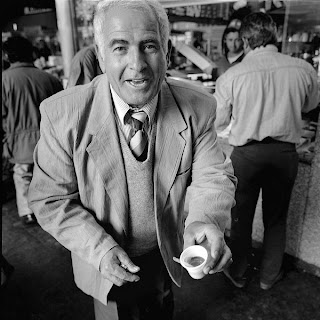 Claire remarked a few days ago that she likes my portrait work but has never really warmed up to my street photography. And I thought about that for quite a while. Then I started thinking about images like the two above. Are they portraits or are they some form of street photography? Both were spontaneous and neither was set up in the sense that I posed them or directed them in any way. So, what would you consider them?

And while everyone's taste in street photography is different I do like these (below) for various reasons.
I wanted to share them again today..... 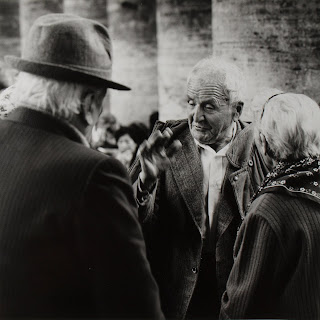 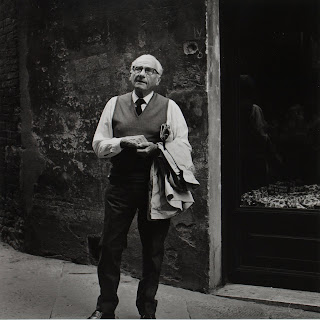 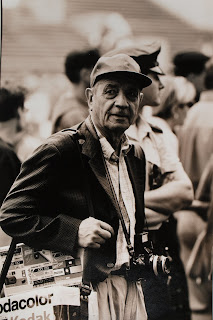 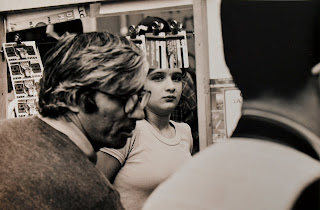 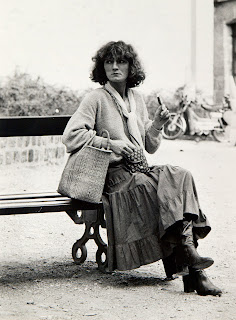 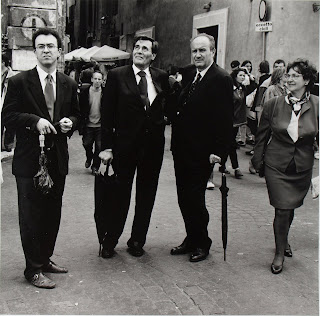 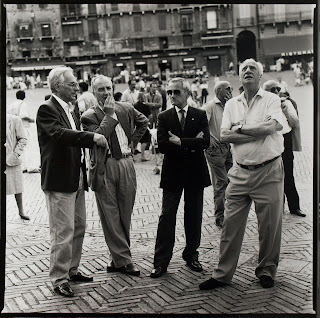 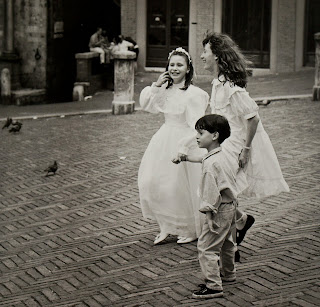 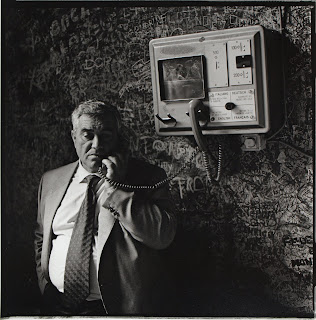 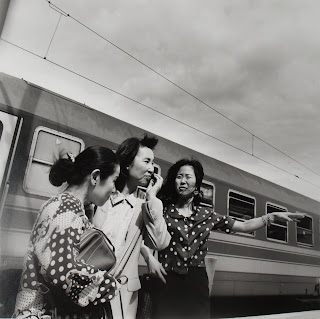 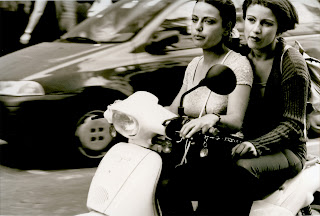 Posted by Kirk, Photographer/Writer at 10:18 8 comments: 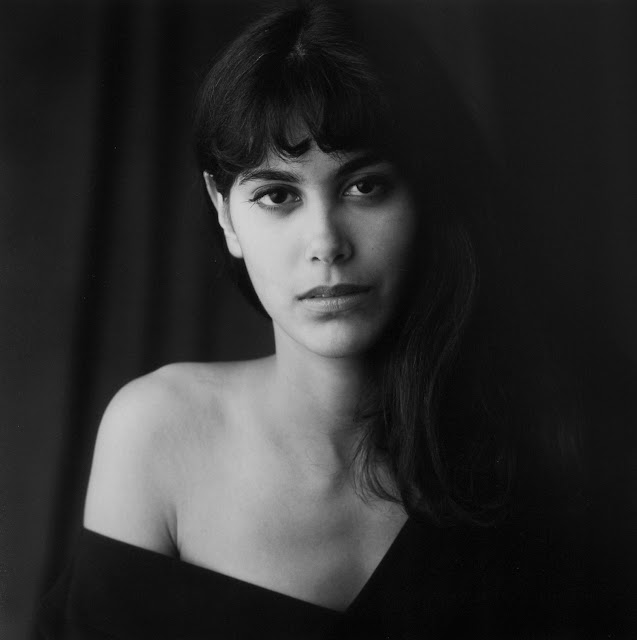 I've been using large lights for portraits for a while now and I love the way they look. My favorite tool in doing this kind of lighting is the black card I use on the shadow side to make the deeper tones more dramatic. This is a scan from a print and as such it's probably hard to see much detail in the shadow areas but on the negative and in the original fiber based print there's sill detail all the way down until the tones turn black. Difficult to represent on the web with only 255 shades to work with....

My current favorite lighting tool (yes, they change from week to week and sometimes from day to day...) is a 72 inch white umbrella with a black backing that's made by Fotodiox. The image above was done with on of my largest soft boxes used close in.

One of the things  I like about portraiture is the ability to constantly experiment with different light sources and modifiers.

When I re-visit portraits like the one above it reminds me how much I like the longer focal length lenses for the style of portraiture I like to do.
Posted by Kirk, Photographer/Writer at 10:06 6 comments:

An alternative to watching re-runs of Breaking Bad this weekend? Tired of all that Downton Abbey stuff?

Well, you could sign up for my portrait lighting course at www.craftsy.com and watch 2.5 hours of information about portrait lighting in the studio..... Here's the ad I just saw in my e-mail. And if the thought of me shooting and talking for a couple of hours isn't enough there's also Neil's classes... Or Rick Sammon's Landscape course...

I'm heading back up to Denver on Weds. next week where I will spend eight days working on the next two programs. Should be a lot of fun. One of the two programs will also be offered free of charge. I'll keep you posted.

Posted by Kirk, Photographer/Writer at 09:56