Why do I keep those Olympus EM5.2 cameras around? Why do I like using them so much more than everything else I own? 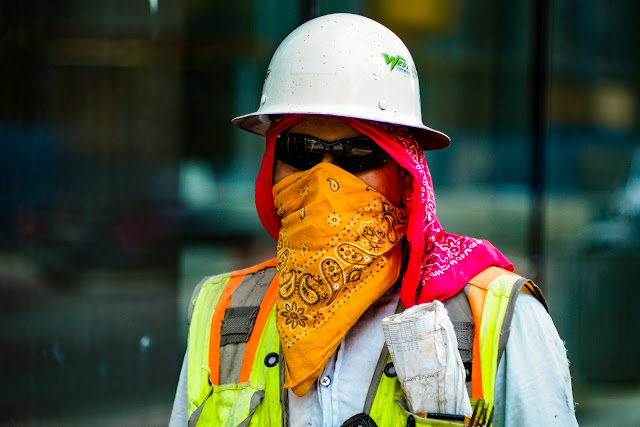 Got the Bokeh, if you want it.

I finished up all of my August work yesterday morning. There was the big PhotoShop project which called for me to convincingly make an executive (who we photographed in front of a green screen) look as though he was addressing a packed auditorium. There were the two portraits for two professional women who are re-entering the workplace after some years off and needed the right look for LinkedIn and other social media. There was the video footage that needed to be post produced for the company providing speaker and spokesperson training. By the end of the day everything had been delivered, approved and billed. Time to take a long neglected walk through downtown Austin. But first the task of selecting a camera and lens(es) to make the walk fun and interesting....

I stood up from the desk and walked to the equipment cabinet which is really a professional grade, Craftsman rolling tool chest (five ample drawers; lockable) and peeked into the bottom two drawers. If you read the blog on a regular basis you probably know that I have relentlessly downsized on camera inventory and also lighting inventory. In fact, I own fewer digital cameras now than at any time in the past fifteen years. Something I still find scary and
Read more »
Posted by Kirk, Photographer/Writer at 13:25 10 comments:

The Summer Went By Too Fast. Balancing Family and Work is a Tougher Equation Than it Seems at First Glance. 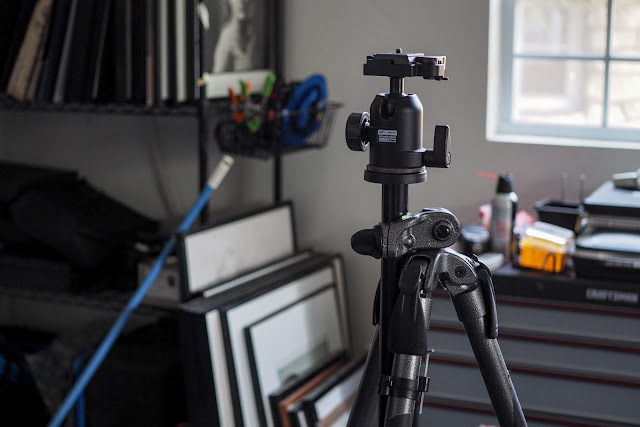 A Nice Little tripod set up for quick studio portraits.
Gitzo Something or Other with a "side arm" center column.

Belinda and I just drove back from the Austin airport. We dropped off our kid, Ben, for his flight back to college. He's heading back a week and a few days early for an orientation/training week. He'll be a peer mentor for sixteen incoming freshmen this year and the college takes the training of their peer mentors seriously.  I know a lot of parents are anxious and eager to accompany their kids to college, help them set up their dorm rooms and generally mope about, delaying the disconnection that has to happen.

Ben has never been the kind of person who needs that amount of handholding and he's done a reasonable job of training his parents not to hover. He went by himself on his initial college tours and got on a plane the first semester of his freshman year to travel solo. That doesn't mean there are no moist eyes in the car as his mom and I drive back home. But damn, he looked so grown up wheeling his luggage into the airport...

The Summer was interesting for me. I worked lackadaisically. A project here and a project there. Nothing major got done with the next book. No real marketing happened for the business. No big, out of town trips to shoot stuff. Instead I set time out for more family interaction. We ate dinners together almost every night. We hit all of our favorite restaurants.  After Belinda headed off to work in the morning Ben and I would sit at the dining room table, each sipping coffee and reading the news on our respective electronic devices. Then, at 9:30, Ben took one of the cars and headed off to work.

I worked on my various projects but mostly I entertained the Studio Dog. Ben and Belinda worked more than me. Ben had two fantastic job offers at the very beginning of the Summer. Both were from established software companies. Both were interested in his writing and video production skills. He worked hard but short days (his choice, his negotiations) and was very well paid. He fit into the corporate culture of his chosen company well. He saved most of his money and invested it.

Dinner conversations were inevitably interesting. They ranged from "how to invest" to "I found a Japanese online clothing company that actually has cool clothing for short, thin people...." to "you have to see this movie in the theaters because..."

Try as I might I couldn't find the balance between work and family this Summer so I defaulted in favor of family. I could not have made a better choice.

I'm happy to see Ben having so much fun with school. I'm sad because I already miss him. He's been a fun guy to hang around with. I have hope though.  Even though he loves his college he mentioned that Austin is amazing because there is always so much to do and so much great food. I'm sure the city will keep drawing him back.

Studio Dog has already staked her claim to his bedroom.

Now it seems like it's time to get back to work.

Sunday update: Ben is now on campus, has unpacked his belongings and even been shopping. He e-mailed that he had to go out and buy a fan. It never occurred to me (Texan) that a residence hall at a college would be built without air conditioning but apparently in upstate New York it's less a necessity than in Texas. Seems Saratoga Springs is having a little heat wave this week.... His mom and I are very happy to hear that he's arrived safely. Thanks to our friends in Saratoga Springs for treating him so well!