Going close and deep with the Rokinon 100mm f2.8 macro. 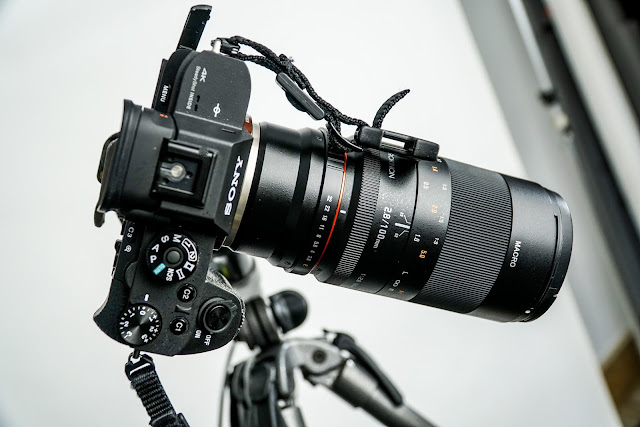 I've been photographing for a high technology healthcare client this week. They make things like CPU controlled joints and prosthetics. We were shooting against a white background and all the products will be clipped and have the backgrounds dropped out. The client likes big files and I like sharp files. I used the Sony A7Rii and a fairly recent lens purchase, the Rokinon 100mm f2.8 Macro.

The lens is physically large but not too heavy. It comes with a very deep lens hood (and I use lens hoods all the time) and seems to be very, very well made. The model I am using is an FE Sony mount so I'm not using an adapter.

There are many lenses I use where I am happy to auto focus and might thing twice about buying a model that "only" features manual focusing but in studio macro work this is not one of those lenses. The need to place focus very accurately means the lenses we use for close up work in the studio should be manual focus lenses.

When I use this lens in the studio I am generally collaborating with an art director and so need to share the preview image and the review image on a big enough monitor so we can both see the images and evaluate them. While many photographers like shooting tethered to their computers I prefer a smaller monitor that I can use right next to the camera as we move it around the studio. I also prefer to have the images written to the in camera card instead of to the hard drive of a laptop. I use a small, battery powered, Marshall field monitor for preview and review purposes. 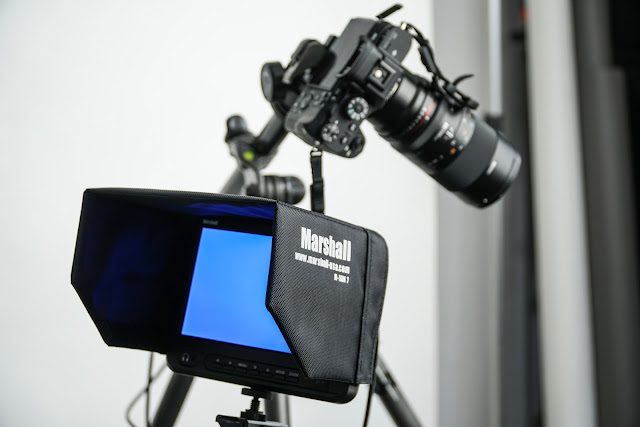 While I have spent time and energy calibrating the monitor we don't rely on it for color judgements, I prefer to make a custom white balance, shoot raw and fine tune the resulting colors in post production. The highly portable monitor is a great tool on the set since the HDMI connection gives me live view imaging on a bigger screen throughout the shooting process. It is easier to see sharp focus that evaluating for focus on the camera screen and it also shows focus peaking and zebras generated by the camera. When attaching the monitor to the camera the camera screen and EVF turn off. This adds much more life to the camera battery. We were able to work with the camera on continuously from 9:30 am, yesterday morning, until nearly 1:30 pm  before we changed camera batteries. I think four hours of run time is great, considering the compact size of the Sony batteries.

Circling back to the lens itself I have to say that it is a very good option. I've used it now on a number of industrial shoots like this one and find it to be sharp across the frame by f4.0 and able to go head to head with any Leica or Zeiss lens I used in the past for macro work. Keep in mind though that the Zeiss and Leica lenses I am referencing all were designed and manufactured back in the film era and so, I am sure, there are newer versions that may be even sharper than the Rokinon.

One aspect of shooting close in is always working with depth of field. There's never enough. At least I think there is never enough. I needed to get enough DOF to keep all parts of the products I was shooting in focus and even though I am very aware of the theoretical sharpness robbing effects of diffraction from stopping down too far I pushed my envelope of technical prejudice and worked with f-stops starting at f11 and going all the way down to f22.

When I examined the files this morning at 100 % I was happy to see that the images were still more than adequately sharp, even at f22. I have not tried shooting at f32 as I think of that stop as a "hail Mary" stop. Put there when nothing else but DOF matters.

The art director and I worked with five SMD LED lights which gave us the ability to see, in real time, what we were getting. The lights were bright enough to make fine focusing easy and the ability to punch in and magnify the preview image all the way up to 25 times was wonderful. That magnification would be useless if you tried to use it while handholding but with a heavy duty tripod it becomes much more practical. At 25x we focused on the grain of metal machining. It was a perfect target.

So, three things have changed since I first started doing fine and close product photography back in the film days. First, we've switched from flash to continuous lighting which makes the process of photographing much less iterative and much more immersive. It also allows me to select and aperture and fine tune exposure via shutter speed (unlike flash which allows control mostly through aperture and ISO). Second, the use of a very portable, battery powered monitor with a much bigger screen (compared to the camera) allows the process to be quicker where collaboration is involved. The art director and I can easily share the monitor and position it on the fly. Finally, using an "all live view" camera along with a well calibrated monitor means we are shooting with a live histogram and lots of good feedback. Once we nail the look and feel of a shot on our monitor we are able to shoot a couple of frames and move on where, in the past, we would have bracketed exposures or moved them to the big computer to evaluate.

As good as the lens is and as fast as the shooting process has become the choke point is always the lighting. Not every object fits into cookie cutter lighting templates. Yesterday we had curved products, built from carbon fiber that had a highly glossy finish. It was a lighting challenge that took an hour, in some instances, to solve. As good as cameras are the bottom line is that lighting still drives the need for experience and expertise as well as understanding all the fundamentals of lighting science. My copy of the book, Light, Science and Magic never gathers dust. And no matter how many things you've lit Murphy's Law ensures that there is always something out there to stump you.

Final thought: The 100mm f2.8 Rokinon Macro is a great lens for a price of around $550. I look forward to spending some time shooting portraits with it in order to understand its strengths and weaknesses as a portrait lens. For now, I am happy that it's a great tool for traditional, industrial close up work.

Posted by Kirk Tuck, Photographer/Writer at 11:43

Wonderful. Serves as a cautionary tale for this amateur part-timer who very rarely is asked to shoot products. It really is wonderful to be shown what an actual professional product shoot entails. Thanks for helping us "RTFM" in such an entertaining fashion, and be prepared before leaping in.