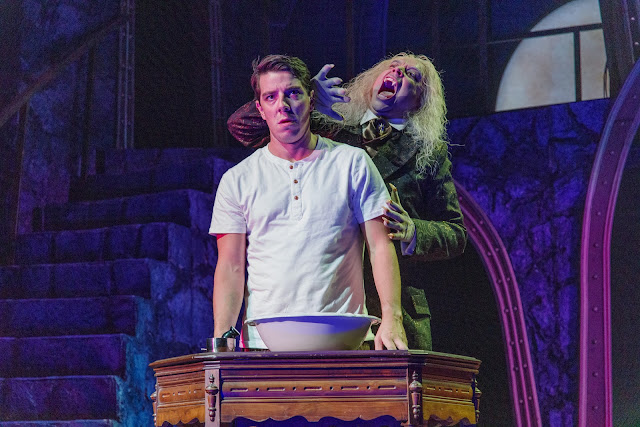 A few weeks ago I photographed a technical rehearsal of "Dracula" at Zach Theatre in Austin, Texas. I brought several different cameras with me but I mostly played around with the Pentax K-1 and two lenses. I brought along the 28-105mm f3.5-5.6 (because it's the only Pentax zoom I currently have) and also the new 100mm f2.8 macro. I'd played around a lot with the zoom and was comfortable with the performance envelope provided by it, but I'd just recently purchased (new in box) the 100mm macro and I was curious to see how the lens would perform in a live theater environment. I was pretty sure it would be sharp but I worried that the focus might be too slow.

Both of these images were created using the 100mm and I'm satisfied with both of them. They were taken one half stop down from wide open and the camera/lens combination did a fine job nailing focus and providing good sharpness and tonality in the photos.

Relative to a long (70-200mm) zoom lens, the 100 macro is small and light, and since it is so well optically corrected I had no compunction about using it either wide open or just slightly stopped down.

Based on the image quality I could see in the images I took that night I pressed the 100mm into service recently to take some portraits. I wanted to use a lens with good resolution and a high megapixel count camera body because I wanted to work in a square format which meant going from a full frame resolution of 36 megapixels down to a 1:1 format resolution of 24 megapixels. While an uncropped, square, 24 megapixel file is adequate (perfectly good!) for just about every use I left a generous amount of space around my portrait subject in order to leave lots of cropping options for my graphic designer/ final client. If she cropped tight, in a vertical orientation, we'd lose another 6-8 megapixel of information and, being a worrier, I always like to build in a margin of safety for commercial work. Everyone was pleased. 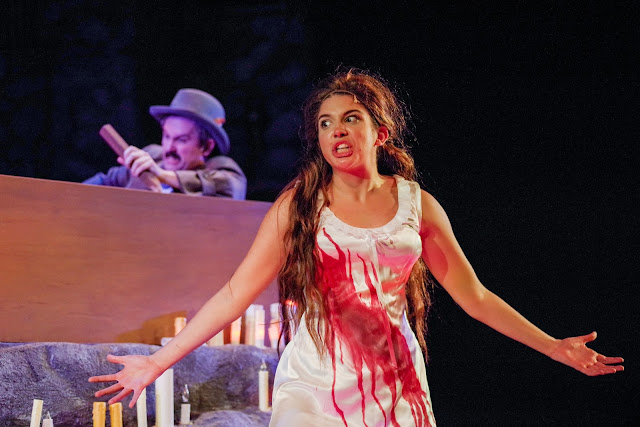 With Vampires in the neighborhood everyone was having a bad day.

I've also found a new use for the two Pentax K-1 cameras and that is shooting with flash at dimly lit events. We're doing our yearly photographic assignment of making candid portraits of about 400 people (200 couples?) gathered at the Four Seasons Hotel here in Austin to raise money for the Texas Appleseed Foundation (legal and constitutional issues...). I've used all kinds of cameras in the past as I've photographed this event annually since the days of film. It's the one kind of photography assignment that I've come across where a traditional optical viewfinder can be superior to an EVF. Mostly because it's all lit with flash in a not so bright interior ballroom.

With an EVF camera if you keep the camera in the "Constant Preview" mode and you are shooting at f5.6 or f8.0 at 1/60th of a second (or faster) at ISO 400 with flash you'll find the image in the EVF to be very dark. VERY DARK. If you take the camera out of the constant preview mode the EVF has a slow refresh rate, lots of noise in the frame, and an automatic exposure setting. Neither option is particularly good for working with on camera flash!!!

I've used mirrorless cameras in this venue/event before and my work around was to switch to using totally manual flash exposure, and carefully maintaining the same camera to subject distance whenever possible. But I've also shot with cameras like the Nikon D800 with TTL flash and walked away with more keepers more easily.

This year I'm planing to lean on the Pentax K1 with a Godox V1 flash, using TTL exposure. I've got a second body as a back up and a couple of fully manual hot shoe flashes as a back up for the Godox. My lens of choice for the social hour of the event is the 28-105mm zoom lens.

I just took delivery of the flash today and as soon as the battery (a big, lithium one) is fully charged I'll start testing it around the office.

Funny/strange to buy a flash for the Pentax because doing anything to flesh out that system seems counter-intuitive. I really can't help it though as I've been loving the files I'm getting out of the system. And, as I wrote, this is one situation where the traditional DSLR really seems to shine....

In related news: I had lunch with my friend, Andy, at El Mercado on Burnet Rd. today. Every time I have lunch with Andy it ends up costing me big bucks $$$$$$. The issue is the close proximity of the restaurant to Precision Camera. After a great lunch of Tex-Mex food we tend to talk each other into dropping by our favorite camera store to see what's new. Last time we lunched I went with him to Precision Camera where I stumbled across the first Pentax K1 and ended up buying it. That's where the slippery slope of Pentax-ality all started for me.

Today I was irresistibly drawn to a $1,700 lens. Not for the Pentax..... but I guess we can discuss that here on the blog tomorrow.

Hope everyone has had a good start to the week. If you are having problems with alcohol please see Michael's Sunday post on his site. If you just want to read about the unplanned purchases of a serial camera buyer then come on back here.... we'll be waiting. Sitting here reading the latest catalogs...