Come on Tuck. That light's not going to light itself. Well, actually it did. Buying more lights is NOT crazy. 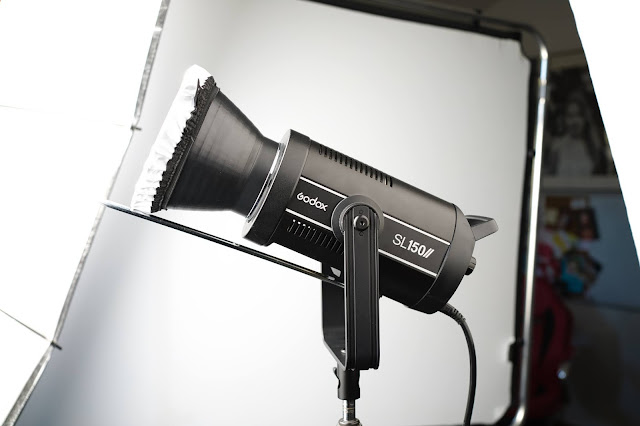 It's funny to me when I look around the studio and notice how few electronic flashes of any type still live here, and at the same time how plentiful LED lights have become. Flash used to be the "work horse" of any photographic studio and, after cameras and lenses, it's where most commercial photographers tossed their money. But then 2010 came along and changed everything. 2010 was the year mirrorless cameras really started showing up on people's radar but it was also the year when the market started to deliver an accelerating deluge of LED products of all stripes, sizes and prices.

One photographer even was commissioned to write a book about LED photography for photographers, a little more than ten years ago. It was published in early 2012. You can learn more about that book here:

I'm not suggesting that you run out and buy a copy because everything has changed in the markets and the information space in the ensuing almost nine years. Three or four lifetimes in LED world. Yes, everything has evolved.

At any rate LEDs have become pervasive in the imaging world. On movie sets. For TV production. In the equipment lists of every videographer. And in the studios and equipment cases of an ever growing number of photographers. Even the ones who don't make videos.

Early on there was a demarcation between lights with great color and lights that were cheap. That boundary has pretty much vanished and now we're concentrating more on power output and features. Almost every light being pressed into professional service has a CRI (color rendering index) or 95 or better and does a great job of hitting their color temperature targets. Earlier lights depended on a panel implementation because the lights were made powerful enough for work by using hundreds or thousands of smallish bulbs spread across the panels.

Panels work fine and I have four Lightstorm panels that do a nice job ---- except a panel has a big spread and it's difficult to get hard edge effects. Also, if you want to use good modifiers you'll probably need a two light stand set up. One stand for the light and a second one for the modifier.

COB, or chip on a board, LED lights started to become affordable about five years ago and were made insanely popular by the Aputure 120D light which used a 1.5 by 1.5 inch COB LED and featured a Bowen's mount. Even at over $650 it sold briskly and there's now an "improved" model.  The LED/COB tech basically took the spot where flash tubes used to sit on lights and allowed for the use of the same modifiers and reflectors that most people were already using on their various flashes.

I'd been buying more expensive lights from Aputure until I found the Godox SL60W which is a no frills COB light, rated at 60 watts, is daylight balanced and uses Bowens accessories. It's also really cheap at around $130. I wrote about these lights a while back and I like them so much I bought three. I use them all the time. Literally, every day. If not for work then for lighting up stuff around the compound.

The three SL60W lights and the four Aputure Lightstorm panels were working for me until I did a job back in August for a bio-tech company, at their headquarters. I needed to light up a 5,000 square foot laboratory and I did it, just barely, and by the skin of my teeth. At that point, and anticipating more work from the company (which arrived last month), I decided I needed to bolster my LED collection with some more powerful lights. I came across some good reviews of some new Godox products by Vlogger, Gerald Undone. Here's one review that's on topic: https://www.youtube.com/watch?v=DbBN_b7OGec

I watched his take on a new generation of Godox COB models and assessed how his results applied to my needs. I don't need battery power or fully silent lights but I can be parsimonious so I decided to purchase the SL150Wii. It's an update from a previous model and provides a mode whereby you can work at a reduced power output but are able to turn off the cooling fan entirely. The light is sturdy, fan cooled and plugs into wall sockets and runs off AC. The light belts out a good deal of clean illumination and seems to fit in well, color-wise, with the rest of my LED inventory.

The light comes with a faceted reflector that makes it very efficient at delivering a lot of lumens. There's a dial on the right side of the rear panel for power output and also a switch to go into a lower power/fan-less mode. On the left side there's a switch to enable special effects and a dial with which to choose them. Think: Lightning strikes and emergency flashers (albeit with only white light). The light also comes with a remote control which allows you to raise and lower the power levels of the light without having to access the rear panel.

The light is rated at 5600K and does not have a sister model to provides multiple color temperature settings.

A week after I received the light (which I ordered from and paid for at Amazon = no freebies! No sponsor!) I had my second multi-day engagement with the big bio-tech company. I used the new, big Godox mostly by bouncing it off the high, white ceilings to provide overall illumination in big rooms while filling in and accenting my subjects with the less powerful LED lights. It worked very well and we breezed through two days of shooting "What you light is what you see." stuff. Adjustments to the lights, made by an assistant in real time while I observe on a hand held monitor, was a great way to work, giving large amounts of control.

But, if one big light is good then two big lights is better. When I bought the first light it cost $349. This weekend I decided I might really want that second light so I headed back over to check on pricing and availability. They were on sale for $279. Having had nothing but great experiences with the first one I was happy to click "yes" to a second one. Especially at 25% off.

The SL150W/ii is not a powerful enough light to offset the sun outside but it's a good balance of size, weight, price and power for indoor photography shoots, and just about any sort of video production. With two of them bouncing off high, white ceilings I feel like I've got more options to play with in large spaces. If I push them both through a couple layers of white diffusion, stretched across a six foot by six foot panel frame, then I've got some really beautiful lighting.

While I wait for the second light to arrive I wanted to photograph my first SL150wii for this post and it was already set up on a C-stand with a white umbrella in front of it. I pulled a 4x4 foot piece of foamcore and held it at the back of the product and just out of frame and took a few shots with a tripod mounted Sigma fp. In effect, the light actually did light itself. All of the light on the product camera from the product. Pretty cool. Very easy.

I'm not suggesting you rush out and buy an SL150Wii. I just wanted to share why I like the light and why I wanted a second one. Forward, into a mostly flash-less future.

Posted by Kirk, Photographer/Writer at 12:36 5 comments: 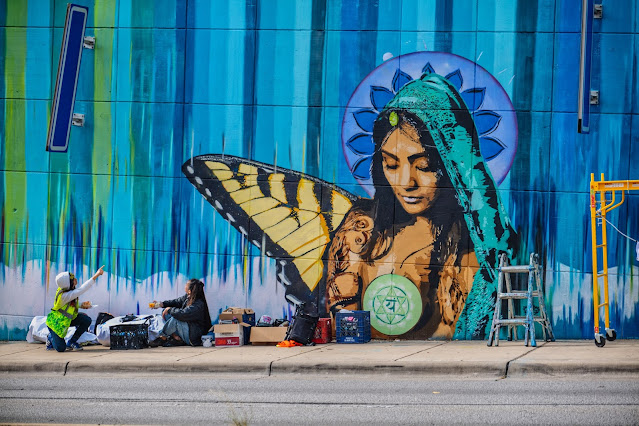 Artists taking a break from an amazing job of painting huge paintings.
The city of Austin funds "Art in Public Places." A certain percentage of the fees and taxes paid by big developers is used to enhance the city in many, many ways. The new (not too new now) international gates at Austin's airport got some awesome and enormous murals five or six years ago and fun stuff keeps cropping up everywhere I look. While some projects have been in the works for a while I hope they keep the program going during the pandemic so young and upcoming artists get some $$$ support to show and grow their art.
It's also much more visually exciting to see huge murals instead of old concrete walls next to our well travelled roads. More like this, please.

From today's walk through downtown with the big honking camera and a big zooming lens.

Nice to have some cooler weather to walk through. Trying to be careful what I ask for though, the temperature is supposed to drop into the twenties (f) tomorrow night which means we're in for a chilly jaunt from the locker room to the (outdoor) pool on Tuesday morning. And again on Wednesday.

Happens every year. We get used to it. The coldest day I remember swimming was one January day when the temperature was down near 20° and we had a brisk north wind. The pool deck was too icy to walk on so the coaches sanded a path from the side of the pool closest to the locker rooms and we all entered and exited the pool at that one narrow point.

It was a bit unnerving to see big icicles hanging from the starting blocks. But the pool is always heated to 80° so our biggest issue during the workout was the thick cloud of steam hanging over the top of the water.

Posted by Kirk, Photographer/Writer at 05:00 No comments: