A quick but happy assessment of an old lens that rivals any of the new zooms covering this focal length. If you want to use one of these you'll have to learn to manually focus. 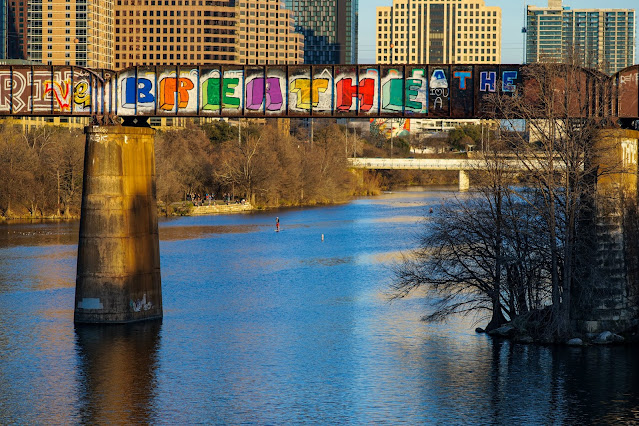 You'll have to take my word for it but at 100% on a 5K Retina monitor
you can see, clearly, the rivets on the metal bridge. It's actually stunning.
Very much equal, at this focal length to the same focal
length on both Nikon and Canon 70-200mm f2.8 lenses I've shot with.
There is a classic focal length that I've liked since my early days in photography. It's the 135mm lens. While we've more or less bought into the idea that our 70-200mm f2.8 zoom lenses are worlds better now than the older, prime lenses of the film days my latest foray tells me that we been sold a bill of goods. The single focal length lenses from the 1980's and 1990's can be every bit as good as our $2,000 wonder lenses it's just that you'll have to put a bit of initiative into their use. You'll have to become proficient and quick with your manual focusing skills.
In a moment of weakness I watched a video from DPR, hosted by Chris Nichols and featuring Canadian YouTube star, Irene Rudnyck. Irene is a portrait/glamor/fashion photographer whose images of young, attractive women have earned her a huge following. She was helping prop up Digital Photo Review by working with Mr. Nichols to provide a review on an older (but still auto focusing) 200mm f1.8 Canon lens.
After working with the Canon lens and plumbing the depths of zero depth of field she made the comment that after a long spell of using mostly 50 and 85mm lenses she is now motivated to try working more often with longer focal length lenses. She mentioned that she thought the 135mm focal length might just be the optimum type of lens for her portrait work. See more here: Irene shoots long and fast
Her suggestion reminded me that the second lens I ever owned for an SLR was, in fact, a 135mm lens. It was a Vivitar Series One f2.8 lens and I used it for anything I couldn't cover with my first lens; a 50mm. I took the 135 on backpacking trips to Europe and also took it up to the summit of Long's Peak in Southern Colorado. It never failed me and it was so addictive to isolate subjects and see the background fall away like magic.
So when Irene mentioned the 135mm in an appreciative way it jogged my memory and reminded me that one of my friends mentioned an older Carl Zeiss lens, made for the Contax Y/C systems was sitting on the used shelf at Precision Camera. It's the same model of lens I took with me to the Paris fashion shows back in 1994, along with a Contax camera.
I drove up, haggled on prices, and returned home with both a 28mm and the 135mm Carl Zeiss Y/C lenses. My previous blog post was a pictorial review of the 28mm. Today, with a bit of late afternoon time on my hands I thought I'd give the 135mm Sonnar a spin around the downtown area and see if my memories of its performance match current reality.
I used it on the front of a Lumix S1H camera, facilitated by a Fotasy lens adapter. I shot everything today at either f2.8 or f4.0. Might as well push the lens a bit since those are the f-stops I'd want to use in real life practice.
I'll let the images speak for themselves but I am blown away by the performance of a lens one can buy for under $200 in 2021. It's very sharp and very even across the frame; even wide open. 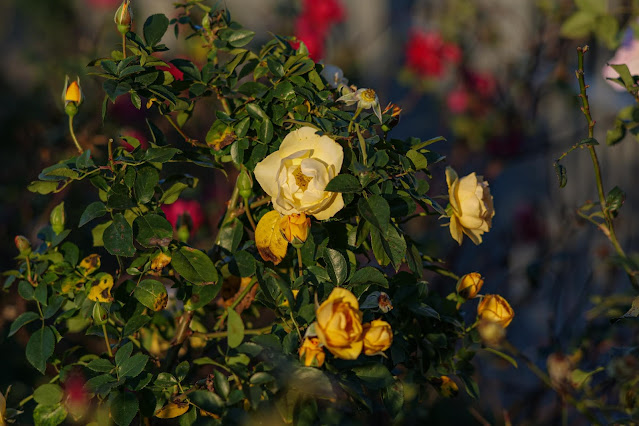 Flowers on the pedestrian bridge. 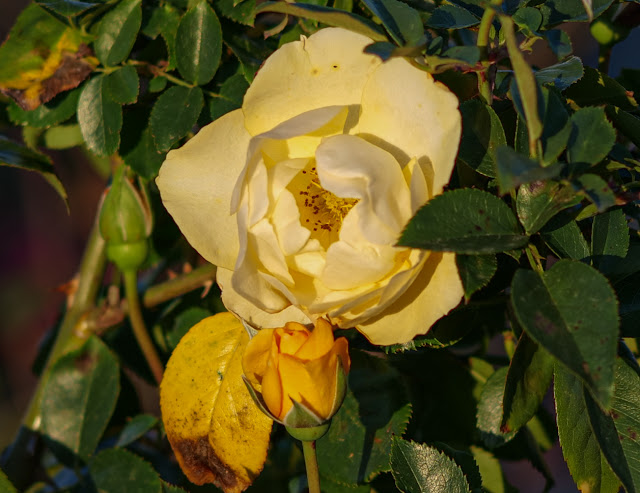 A crop into the center of the image just above.
At 100% you can see the individual pollen granules on the flower's stamens. 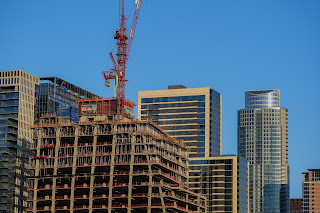 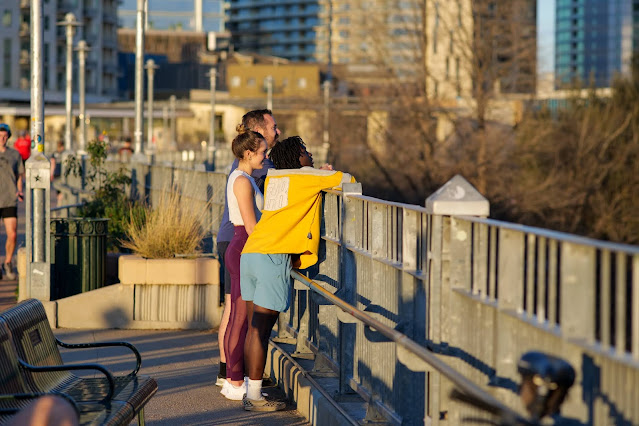 combine this lens with the highly accurate focus peaking of the Lumix S1H
and toss in the IBIS and you have a killer walking around lens that can
be focused quickly. 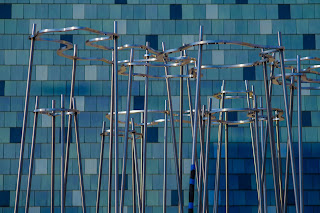 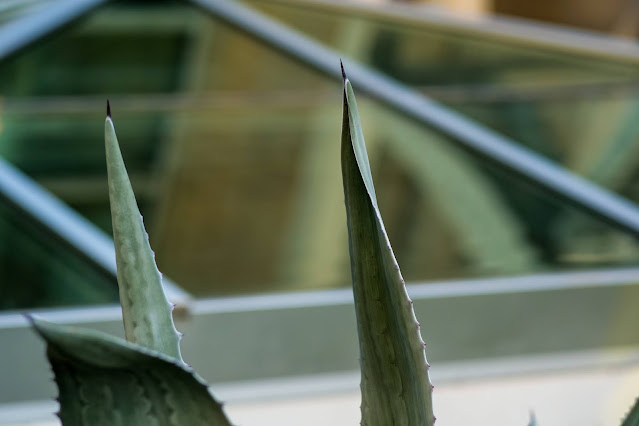 This is a full frame shot at the closest focusing distance. 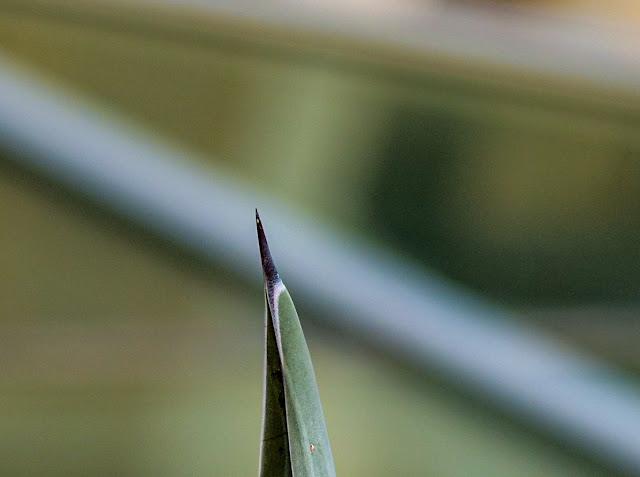 this is a crop on the needle the lens was focused on in the images just above. 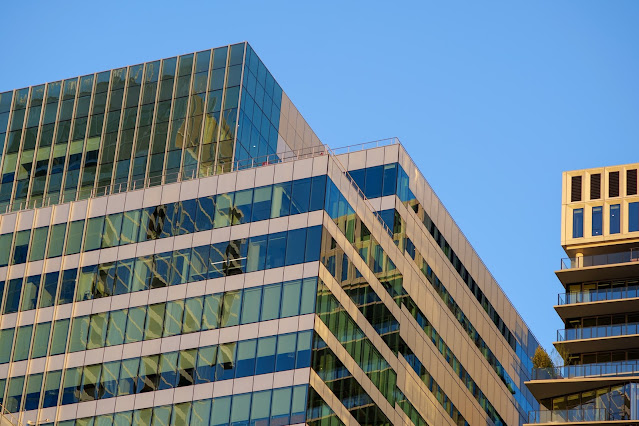 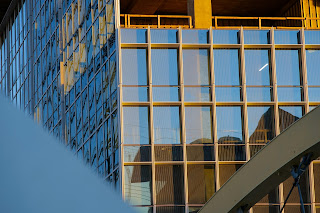 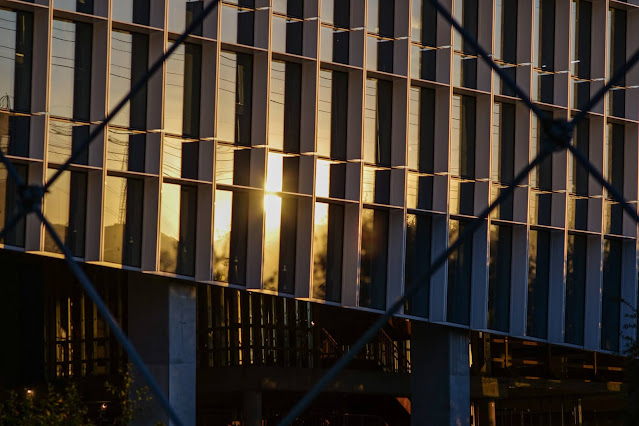 No problems with flare. And this is wide open. 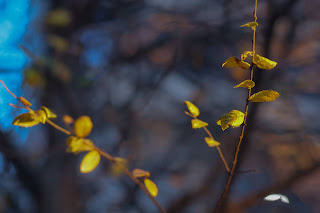 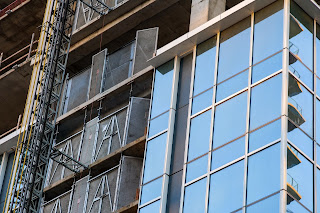 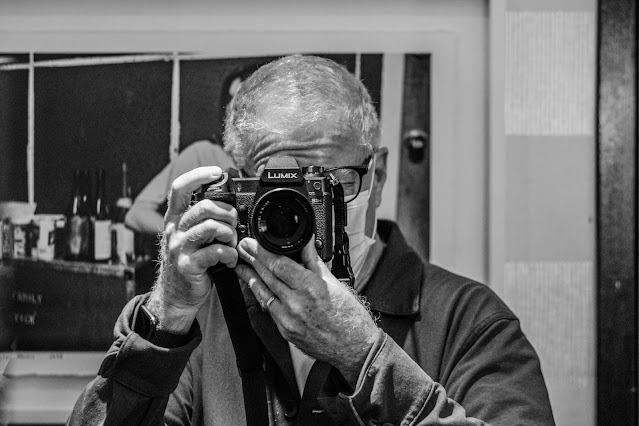 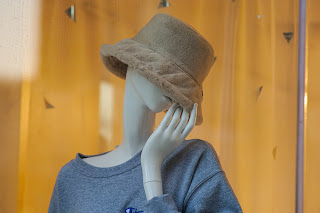 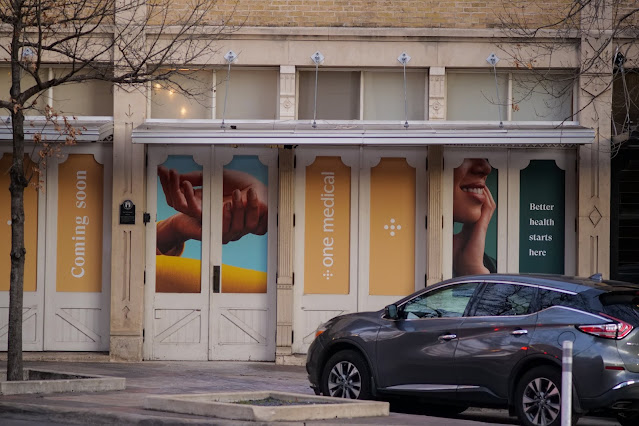 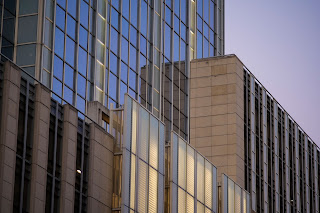 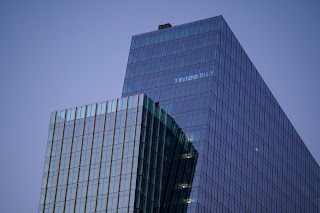 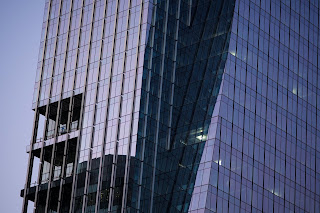 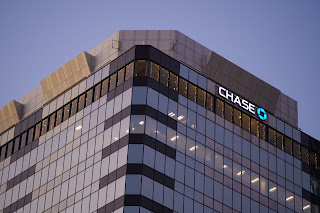 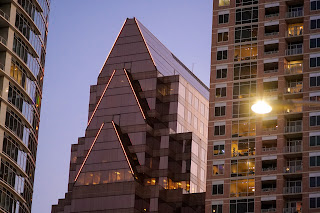 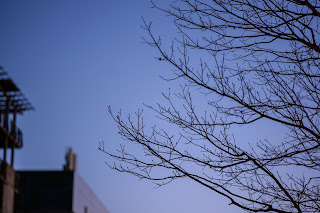 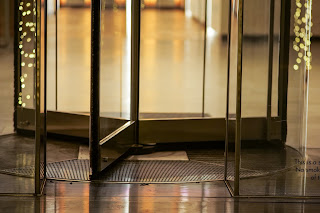 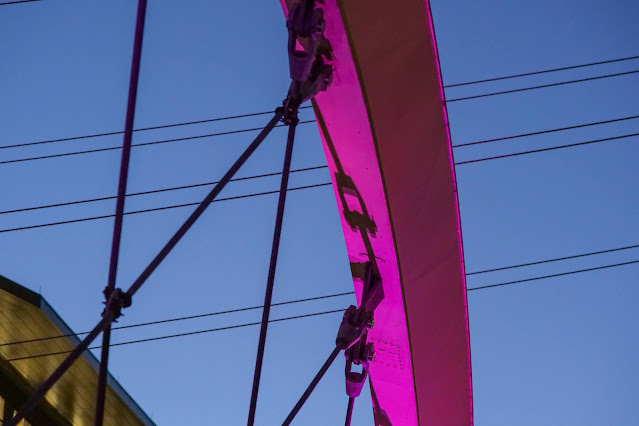 this shot, and all that follow were done handheld at f2.8 with the camera
at ISO 12800. Jpegs from the Lumix S1H.
I'll happily settle for this kind of performance any day. 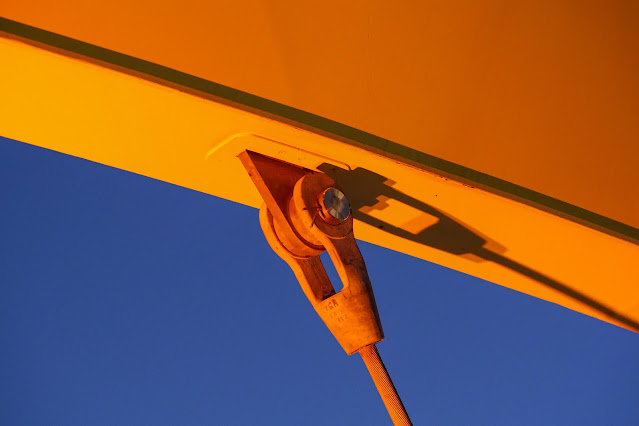 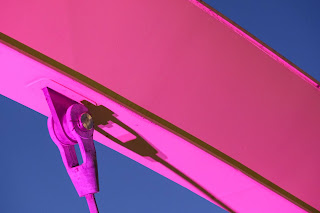 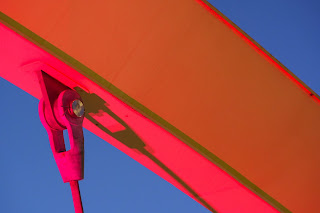 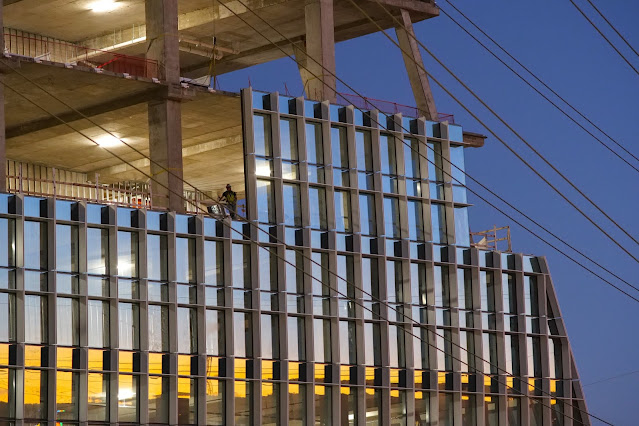 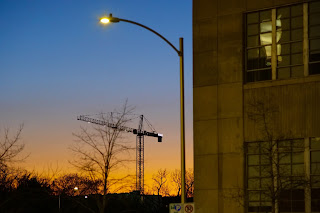 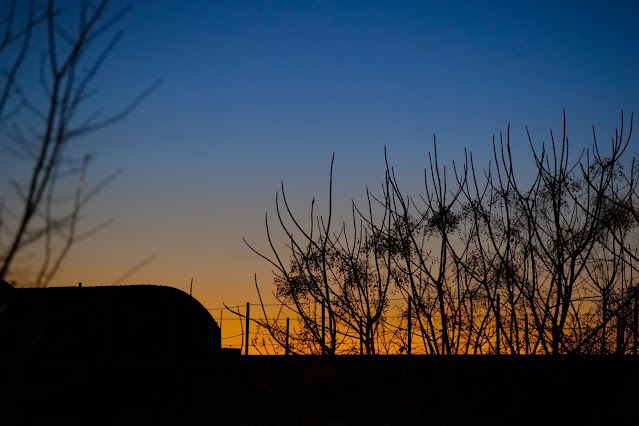 end of day. Too dark to see the buttons on the camera.
an hour and a half spent looking and shooting.
3.5 miles of shoe leather left behind.
Heading home for dinner with my family.
A nice end to the day.

Posted by Kirk, Photographer/Writer at 22:27 11 comments: