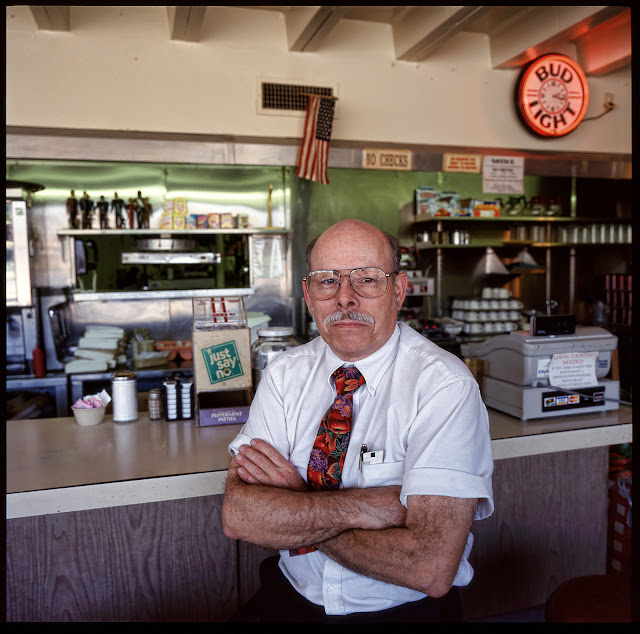 A while back (early 2000's) I got a phone call from one of my favorite clients, the art director at Restaurant Business Magazine.  When she called I usually got to shoot things like a premier chef showing off his chops while making an incredible duck recipe.  We'd shoot and talk and then, after we were pretty sure we had the shot. we'd all sit down, crack a nice bottle of wine and take a crack at the duck as well.  Other assignments introduced me to the brothers who own the legendary San Antonio restaurant, Mi Tierra.  I even drove the six hours to Laredo once to photograph the one great chef in the region, at the time...

This assignment was different.  Austin was one of the first cities in the country to ban smoking in restaurants and the gentleman in the photo above, Vic,  (owner of Vic's Restaurant) was the protest hold out in the implementation of the law.  Seems smokers comprised an overwhelming majority of his clientele and, according to Vic, they spent more per person than non-smokers.  His basic philosophy could pretty much be distilled down to, "I don't require people to smoke.  But they can if they'd like."

I packed the usual jumble of lights and stands and softboxes, and I packed a couple of Mamiya Six medium format cameras along with the trio of Mamiya Six lenses, and headed over the the "Y" at Oakhill.  That's where two Texas Highways come together just west of Austin and just outside the front gate of Freescale Semiconductor's front gate.

I walked in, met Vic and looked around.  Half of the restaurant was kinda cordoned off and I learned that this was where Vic practiced his second business, repairing computers.

The bar at which Vic is sitting faces a wall of windows so I immediately discarded the idea of lighting anything and instead went available light with the 75mm lens and camera on a tripod.  I shot two twelve exposure rolls and ended up with just the look of defiance the magazine was looking for.

Of all the cameras I've owned and sold I regret most selling the Mamiya Six cameras.  They were absolute magic.  They could make a photographer better.  No matter what people say.  Some times the Indian likes to shoot with a really perfect, absolutely straight arrow.  Especially a magic one.
Posted by Kirk, Photographer/Writer at 16:03 10 comments:

GH2 Officially Rocks. Kirk likes it. So much so that he's typing in the third person.... 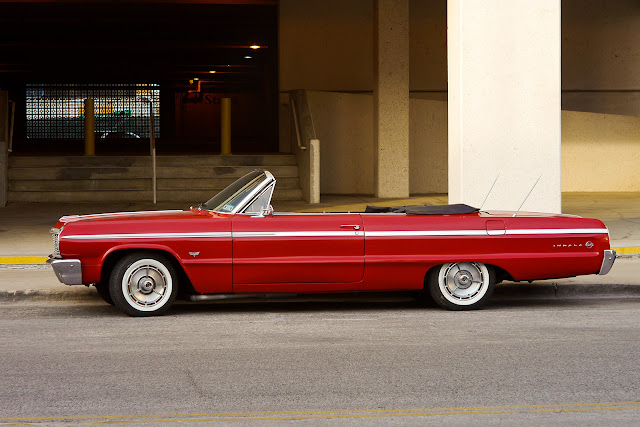 Bitchin Impala.
After a month of messing around with the GH2 I finally sat down and went through every word in the poorly written manual and mastered the settings on the GH2 that had confused me but which I really wanted to use for my photographs.  I did a portrait assignment on location with the camera and its 14-140mm lens last week and, at ISO 160, the images were just right. (go figure).
But the big revelation to me was to set the preview to "constant" if I wanted to see real time changes in exposure, on the screen, when I changed camera parameters.  I also found the "sledge hammer" settings in the film modes for sharpness, contrast and saturation.  No fine tuning allowed.  The jumps are big.  But in Jpeg the one jump up to higher sharpness helped me zero in on what I wanted in my files.  More apparent sharpness.
My lens test, on Saturday, showed me that all of these cameras and most of the lenses are pretty darn good.  Even lenses from the 1960's and 1970's.  You just have to eliminate operator error or operator laziness.
I ran into a large group of photographers who were doing the downtown "photo walk" thing and I was surprised to see that none of them had embraced the smaller, mirrorless cameras yet.   Each participant was carrying a full sized DSLR.  One person was walking around, shooting handheld with a Canon 24mm tilt/shift lens on a big Canon body.  They all seemed to be having fun.
I was happy to be traveling light.  Just the GH2 and the Olympus 60mm 1.5.  Fast and easy.
Posted by Kirk, Photographer/Writer at 08:28 12 comments: