Revisiting the Panasonic G6. On stage (or near the edge of it...) at Zach Theatre. 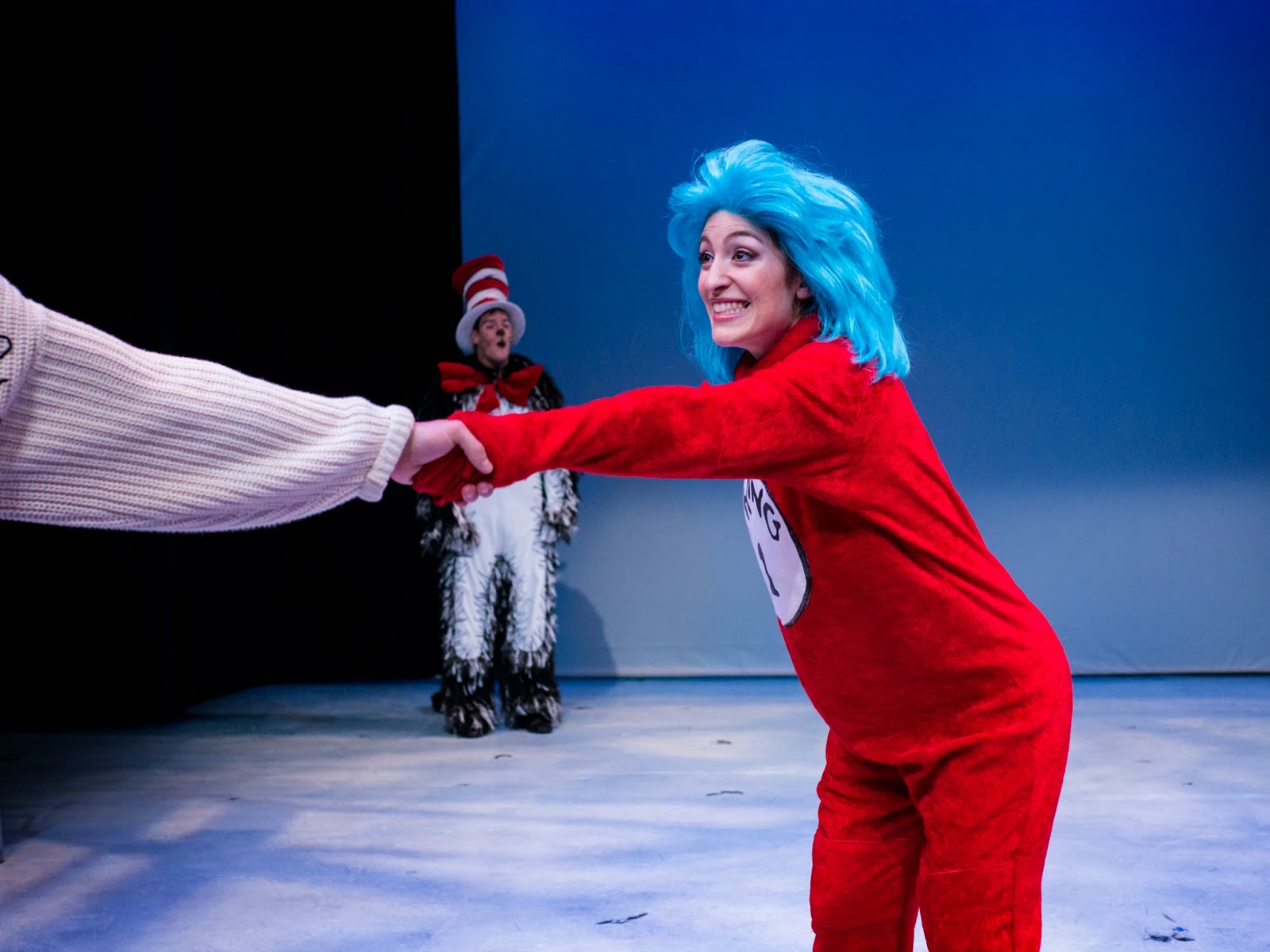 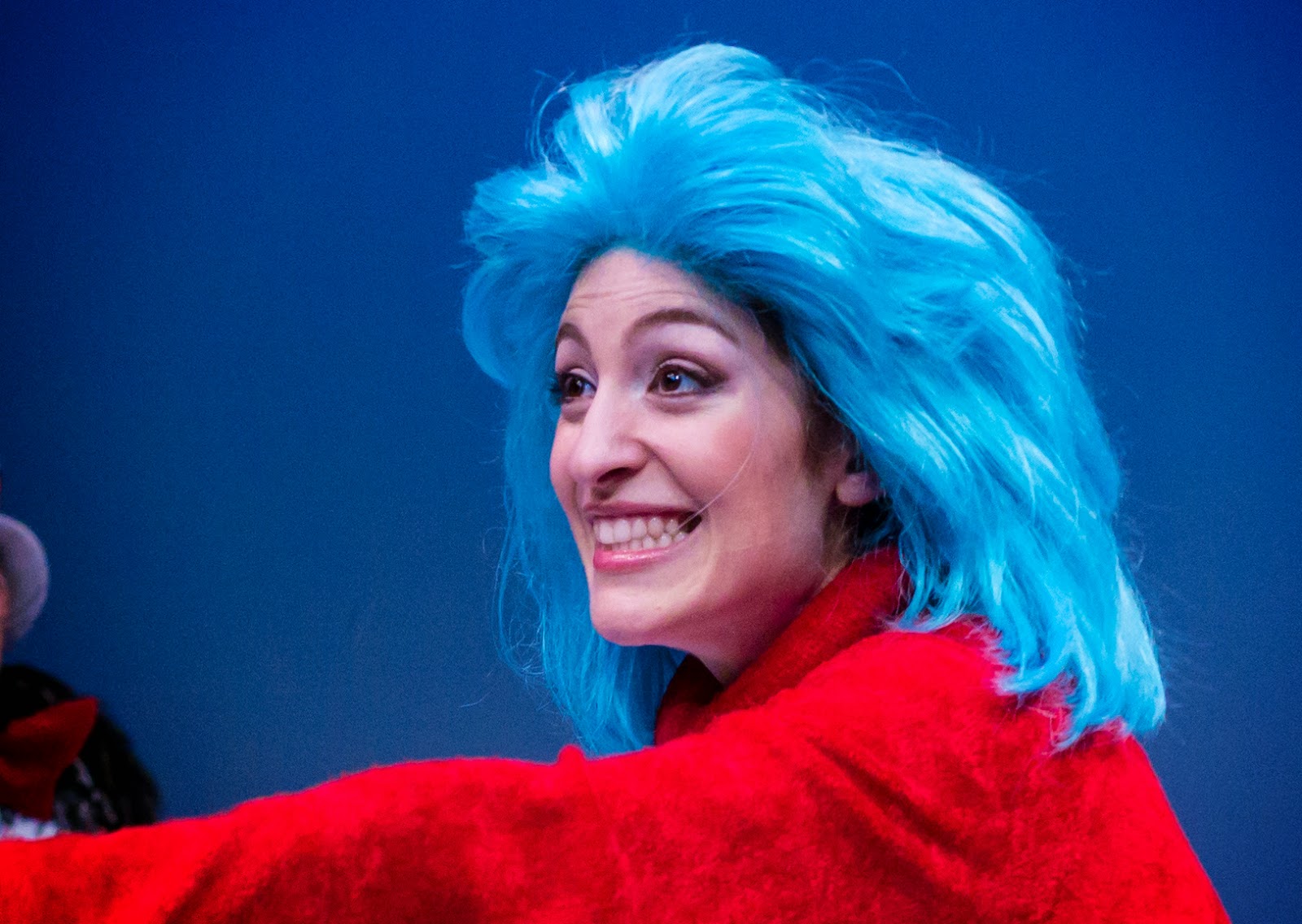 Thing One from "The Cat In The Hat."

I had all these great intentions to shoot this kid's play with the big ole Sony full frame cameras till I remembered how much better the Sony RX10 nailed the colors and the exposures last time I shot a dress rehearsal. I had almost made up my mind just to go with the RX10 and keep the big cameras in reserve when I literally tripped over the Panasonic G6 and 25mm Pana/Leica Summilux I'd left on the floor the day before. So I scooped it up and dropped it into the camera bag next to the Sony cams.

When I got to the theatre I pulled out the RX10 and set up all the controls the way I like them.  I find that it's important to go through and make sure you set the stuff that's germane to the shoot at hand. The last time I used the camera was for video and I'd turned off stuff like IS and set the focus differently. Oh, yeah...and the ISO and the color balance....

I knew the theatre lighting in the smaller stage pretty well and I knew that the play would be a fast moving one so I set the ISO to 1600. That meant I could stop down to f4.5 (the absolute sharpest f-stop for the Zeiss zoom lens) and still get shutter speeds in the range of 1/200th for most of the well lit scenes.

Once I got my primary camera set  up I grabbed the little Panasonic and set it the same way. And in a daring break from my traditional theatre shooting practice I set both cameras to RAW.

I knew I'd get good files from the Sony. At 100% there would be a pattern of monochromatic "digital grain" but at any size that the theatre might want to use the images the noise would be mostly invisible. I had previous experience shooting this camera at those settings and I knew we could pull it off.

But I wasn't so sure about the Panasonic G6. Subconsciously I'm sure I'd bought into the anti-hype I'd read or stumbled across on the web. The take on that camera is that the sensor is one generation older and it is rumored, conjectured or believed to have less dynamic range and more noise than "modern" cameras. But I'm obstinate so I decided to look for myself.

When I compared the raw files, head to head, in Lightroom (current version) I found that the "digital grain" more or less matched. The G6 was perfectly fine to shoot with. And while the color rendering was a little different between the two cameras I would be happy with either.

I ran into one problem with both cameras. I ran into the buffer. I was shooting full raw files (there's no option for a c-raw or compressed raw...) and I found that after the first six or seven quickly shot files the cameras both slowed down. They process quickly so they recover quickly but it took me a while to get used to the cadence. When I shoot Jpegs I never seem to have an issue with either of the camera's slowing down.

Both cameras were great at nailing the exposure and when I disagreed with the cameras I was forewarned by the miraculous technology of the EVF and I could easily tweak exposures with top mounted, direct, exposure compensation controls. The feedback loop, incorporating good EVFs made the shooting much more reliable than any set of cameras I have previously used, including the Sony a99.

Above, I have included a hand-held (no image stabilization in the G6 with the Leica lens...) fast action shot from the play.  The aperture is nearly wide open. The shutter speed is nicely fast. The AF locked on like a badger.

The top shot is the full frame and the bottom shot is a 100% crop of the top shot. For ISO 1600 with moving objects in contaminated light I think the G6 is a rocking good camera. I'm currently waiting for those genii at Amazon.com to lower the price back down to the $495 at which I bought my first one so I can buy a back up. While I'm almost certain that a G7 is in the wings I'm happy enough with the performance of the current camera to not wait around betting on the future.

The play was fun. The photography was fun. And just to shake things up, when I left the theatre and went to shoot my next job...a corporate job....I tossed the little cameras into the trunk of the car and used the Sony a850 for all my afternoon shots instead. All at ISO 160. All with fast primes. Oh my. My world is upside down...

But the cameras don't seem to mind. They seem not to be judgmental.
Posted by Kirk Tuck, Photographer/Writer at 21:41

It is good to hear of a working pro photog discuss the merits of small sensor cameras used for "real" work.

So much web forum discussion on how small sensor cameras are for folks who just want a fashion accessory.They should never be used for "serious" photography. I say use the correct tool for the job and sometimes full frame may be that tool. For most of my hobby "work" that 1" Sony or M4/3 sensor is just fine.
thank you
Joe

As you have shown us, beyond a certain point, the camera has as much to do with the attractiveness of the image as a pen does with the quality of a novel.

Camera and pen manufacturers, of course, would like you to believe differently.

Kirk,
The quality of the photos is irrelevant unless it is validated by using interweb approved equipment:-)

Good photo. While I like to think of myself as a flack and white guy the colors impressed me.

But just think how much better it would have been shot on a Nikon D800!!!

I tried the G6 and really wanted to like it. I still think there is an odd(ness) about how it handles noise. "They" say it has the same sensor as the GH2 but for my the G6 behaved very differently and in ways that didn't bother me on the GH2 or even the GH1. In the end I returned it and am ducking down the Fuji rabbit hole. Shame because that doesn't help me with video in the least, but I'm loving every other move Fuji is making. Panasonic seems hands down committed to the video folks. Fuji seems to really listen to and commit to the stills crowd.

My wife took the family to see a local production of the "Cat in the Hat". As much as I'd love to try my hand again at taking photos of live plays, the local theatres in my town are adamant that there is to be NO photography during the performance - for copyright reasons. (And, undoubtedly, to avoid having to deal with flash units going off that would distract the audience and ruin carefully-staged effects.)

Thanks for sharing these photos. It looks like it was as fun as the one I saw.