Were those ancient digital cameras really unusable? I found this quick photo of Elton John and was pleasantly surprised at the capabilities of the "primitive" camera. 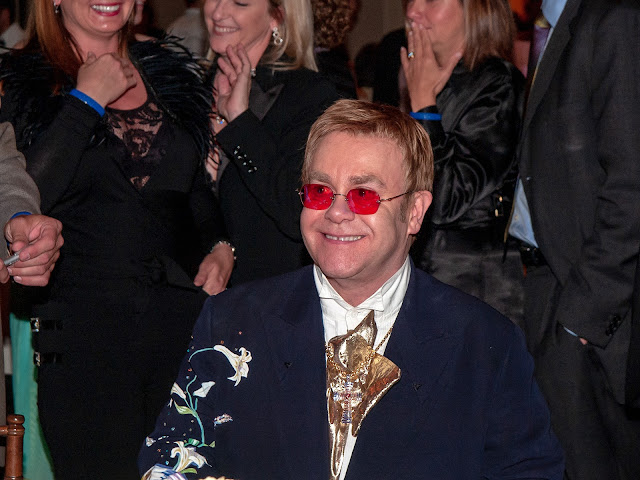 Andy Roddick started a foundation, and what better way to kick off a new foundation than to invite a friend like Elton John to come to Austin, Texas to do a fundraising concert at the Four Season Hotel?
I was asked to come along and take photos of Sir Elton John with Andy, and his friends and family, (not for public display) and also to cover the dinner and concert for the 250 people attending.

The camera I was using at the time was the Olympus E-1 and the lens was an Olympus 14-54mm. So, about 5 megapixels of resolution with an older CCD sensor. Should have been a noise machine; right? But we didn't know any better back then so I persevered. We also read a lot of stuff on the early web about how hard it was to do flash with digital cameras in 2004-2005 but most of us found that using manual settings made short work of good exposures with flash...

Of course, I would love to be able to send back a couple of current cameras in a time machine so my younger and handsomer self could make great use of those ISO "invariant" Sony sensors everyone seems to gush about. But I can't currently afford even a Sears time machine so I'll just have to be happy that the images came out, were well used, and assisted the Foundation with their fundraising goals.

Rick Perry was there too, but that's another story. He sure look groovy in his black turtleneck shirt...

Sometimes you just have to use the camera you have on hand. Waiting for the future is too expensive.
Posted by Kirk, Photographer/Writer at 18:01 7 comments: