Beater camera of the day. It took me a while to warm up to this one but now I want to use it most of the time. 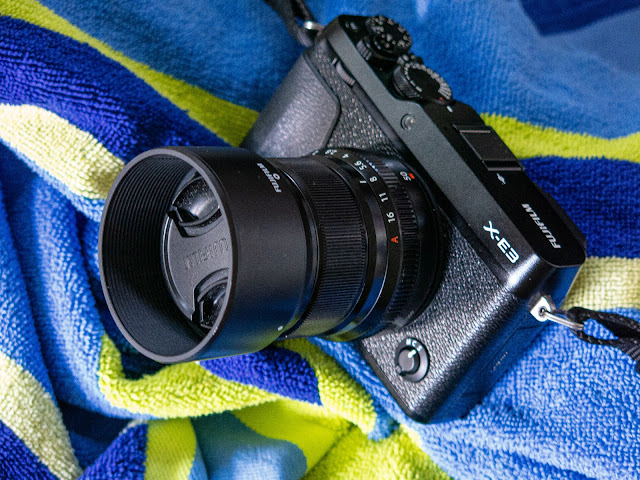 Favorite camera hangs out on one of my favorite swim towels.

So, what's a "beater" camera? That's the one you take everywhere, no matter what. It rides on the floor of the car, it's hanging off your knee by its strap when you sit at a restaurant or bar, it goes out when the weather sucks and it doesn't mind getting tossed into your swim bag when you head out the door to swim in a lake or a pool. It's not your best camera and probably not your money maker but it's the camera you get used to the most because it's always with you.

The Fuji X-E3 was the second Fuji X series camera I bought, after the X-T3. I meant to buy only one Fuji camera but then my working photographer brain kicked in and made me buy a back up body. I opted for the E3 because it was (relatively) cheap and it was just supposed to be for a secondary system; not part of my primary shooting gear. I didn't spend time looking at haptics or hold-ability as much as I did making sure the imaging sensor was a good one and the files looked okay.

Now I take it everywhere and the X-T3 spends most of its time in a drawer. If anyone bought a Fuji X-H1 with the grip and batteries during the recent $1299 sale and they have buyer's remorse because they are thinking they should have gotten the newer X-T3, I'm willing to make a trade. Right across the board. Low mileage X-T3 for low mileage X-H1. Let me know, Figure out how to e-mail me on my website. Only serious people need apply. (well, you don't really need to "be" serious. You can be jovial. I just want your camera trade intention to be serious...).

This afternoon I'm heading off to shoot behind-the-scenes on a TV commercial. We'll use the shots for social media, digital marketing, et al. I'm taking a couple of X-H1 cameras and all the good glass. I'll need to shoot under the lights the production company is setting up for the video production so I'm going to be leaning on the image stabilization in those cameras. But I'm also taking the E3 so I can shoot wacky stuff with the 50mm "Fujicron" and the Olympus 60mm f1.5. Nice to have a small and light camera hanging around your neck, with just the right lens at your fingertips. I'll take more chances with this camera. The bulk of the shots destined for the client's use will come from the bigger cameras.

The more I use the Fuji X-E3 the more I like it. But only with small, light lenses. That's its zone; its sweet spot.

Second most fun camera this year: the Canon G15. A wonderful, wonderful point and shoot. It's my permanent car camera now. Jostling with the E3 for dominance in my mind. Benefit? I.S. Con: smaller sensor. Reality: They are both great.

Get in touch if you have an H you need to convert into a 3. I'm game.


Posted by Kirk, Photographer/Writer at 14:50 9 comments: