I dropped by Zach Theatre last evening to take a look at a rehearsal for their outdoor Christmas Concert. I ran into my friend, Austin Brown. 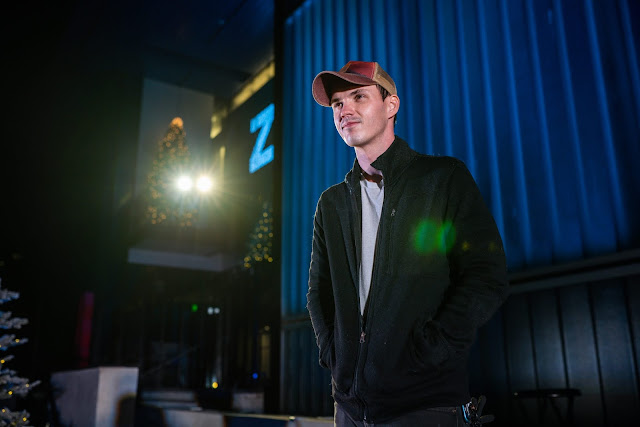 Austin Brown is one of the stage lighting designers at Zach and he's been given the unenviable task of designing a lighting scheme for the outdoor concert series this winter. The budget is tiny and one consideration is that the lighting instruments and cabling have to be brought in if rain hits and also during the days no shows are scheduled. It's either that or round-the-clock security on the plaza. Cheaper, I think to reduce the complexity of the light inventory.

I've been using Austin as an assistant on shoots lately. He's incredibly good at it since running cables and working with lights is his real, 40 hours+ a week job, when the theater is not closed down for a public health emergency.

When I ran into him yesterday he was making sure the lighting was set but he was also playing around with an iPhone 12 Pro Max on a cool, little gimbal, shooting a bunch of video and giving the stabilizer a good workout. He noticed I had a camera with me (when do I not?) and asked me to make a quick portrait of him up on stage.

I went totally counter-intuitive with this one. I got so much feedback from readers and fellow, local photographers chagrined about my disdain for the 35mm focal length that I thought I'd give the messy little focal length another try. This shot was done with the Sigma 35mm f1.4 Art lens for the L-mount cameras. I had it attached to an S1R and I was shooting at some zany f-stop, like f2.2.

I could see the flare when I took the photograph and I really liked the effect. Pretty amazed though at how well the lens does delivering contrast into the main subject, even with a couple of 2K spots shining directly into the front element.

I also shot a little bit of video on my new gimbal --- since I was there and we had actors on the stage. More about the video in a bit...

Posted by Kirk, Photographer/Writer at 11:08 6 comments: