I know the Olympus 75mm lens has been around for a long time but no one has written about it in conjunction with the new GH6 yet. So here goes. 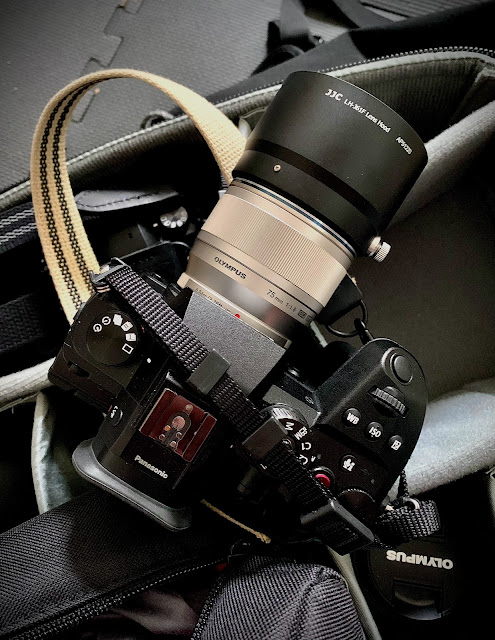 Here's the spec-y scoop on this ancient but current lens: Its optical design incorporates three extra-low dispersion elements and two high refractive index elements to reduce a variety of aberrations and color fringing for sharp, clear, and color accurate imagery. A ZERO coating has also been applied to individual elements to suppress surface reflections and flare for greater contrast and color fidelity in a variety of lighting conditions. Additionally, a Movie & Still Compatible (MSC) autofocus system is employed to deliver quick, quiet, and precise focusing performance to suit both video and photo applications.
(from B&H website...) 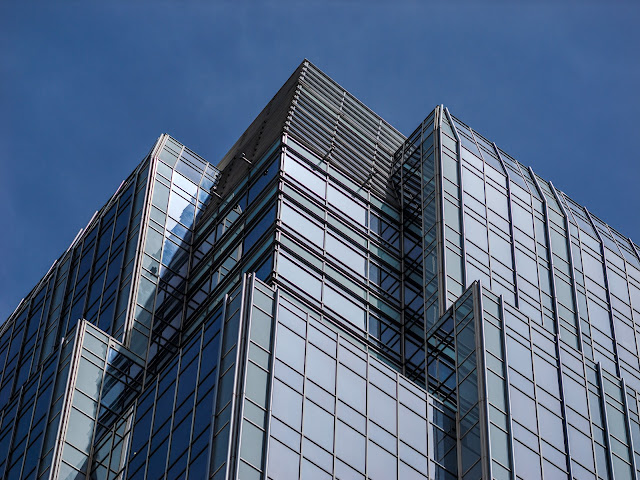 I've always been curious about the 75mm f1.8 lens from Olympus. It hit the market back around 2009 which makes it absolutely ancient by digital standards and yet reputable lens testing sites continually say that it's one of the highest performing m4:3rd lenses ever tested. Even wide open it hits the top of the resolution charts and by f2.5 to 2.8 the optical quality is something to write home about.

As curious as I've been I always thought the 75mm might be too long a focal length and have too few applications for my style of photography. But when a close friend decided to move on from the Panasonic/Leica 42.5 f1.2 and also his Oly 75mm f1.8 I was thrilled to acquire them. I wrote about the Panasonic/Leica lens on Sunday and I will reiterate that I loved the look, the sharpness, and the colors from that lens.

I took a break from being a serious blogging photographer yesterday because I was busy being a regular, commercial photographer instead (I did 15 really nice headshots for an advertising agency yesterday ---  they called minutes ago to book me on another shoot this Friday!!!) and by the time I got home, got the images processed and a gallery made it was too hot outside and I was too wiped out to audition the second new lens. The 75mm had to wait until today...

We had a hell of a great swim practice this morning and I also had to sit down and finish a John Sanford  novel (Heat Lightning) I'd started the day before but in the early afternoon I was ready to brave the heat and go out for a brisk stroll with one of the longest (angle of view) prime lenses I would every willingly take for a casual walk. And guess what?

It's a wonderful lens. It's not quite as contrasty as the Panasonic/Leica but it's not flat either. It wanted a little boost to the contrast in Lightroom. Somewhere along the lines of "plus 10" and once applied the images present as crisp and satisfying. It actually renders exceptionally well, with the background areas smoothly and calmly out of focus when used at, or near, wide open. In fact, all of the images below were shot at f1.8 to f2.5. I think it's remarkably good performance and the GH6 camera takes full advantage of the on tap sharpness. But you can see this for yourself in the images below.

I braved the 103° heat just so I could show these test photographs to you. You might as well click on them and see the gallery writ large. Ah, test images. Don't you wish all reviews came with proof of concept?

Amazingly the lens still retails for $899 at most major retailers. Seems to hold its value well. Every once in a while a camera company makes a real effort to create a lens masterpiece. This is one of them. 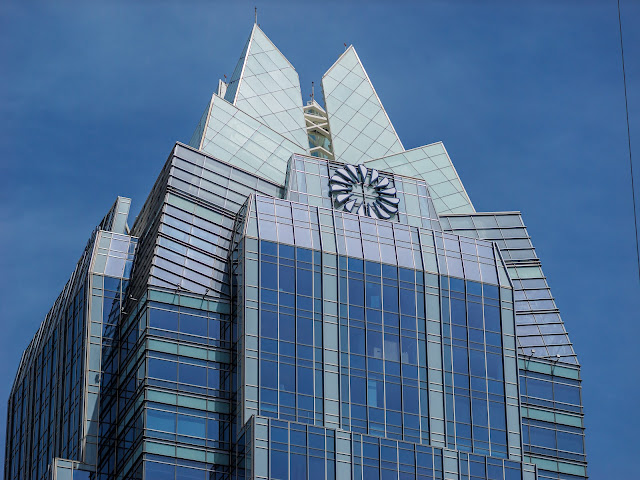 The Frost Tower is a perennial test subject. It's always there. It stays still.
And when the sky is blue everything looks better. 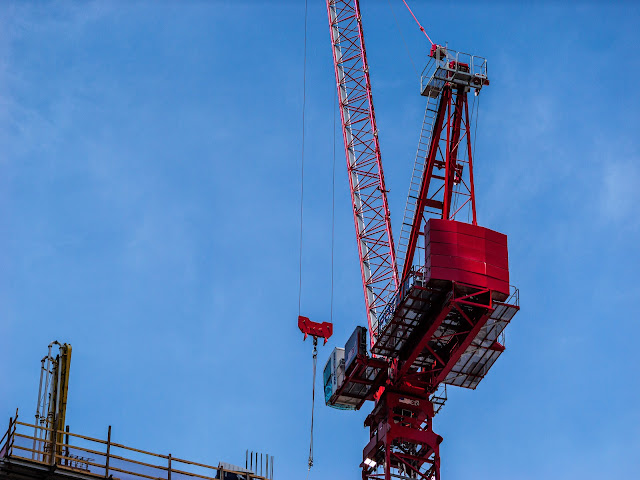 I've been paying attention to reds lately. I find that the new crop of Panasonic
cameras handles reds very well. 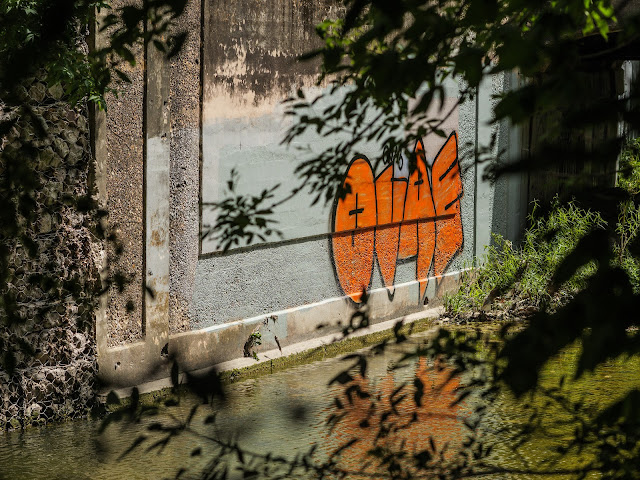 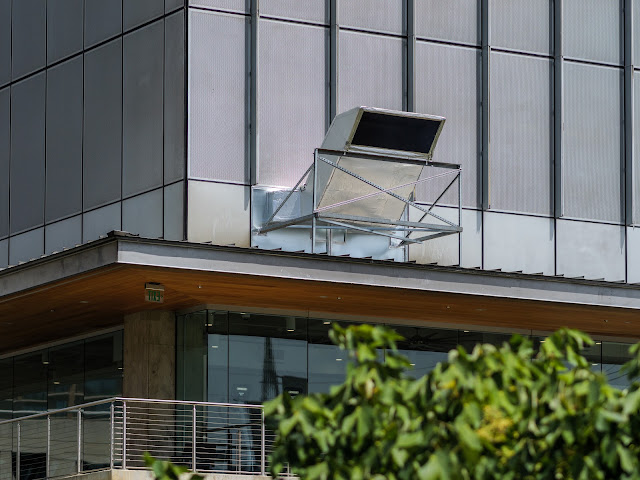 When this building was first completed there was an exhaust vent from the kitchen of the restaurant in this corner of the building that flush to the wall. In a couple of months there were black smoke stains all around the vent. This, I think, is their new solution to the original poor engineering. 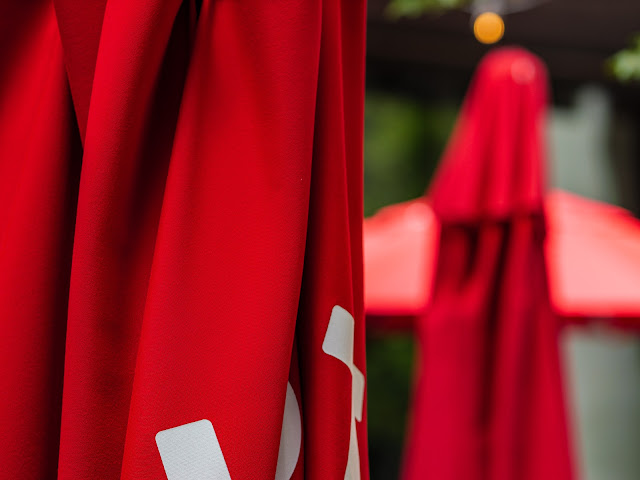 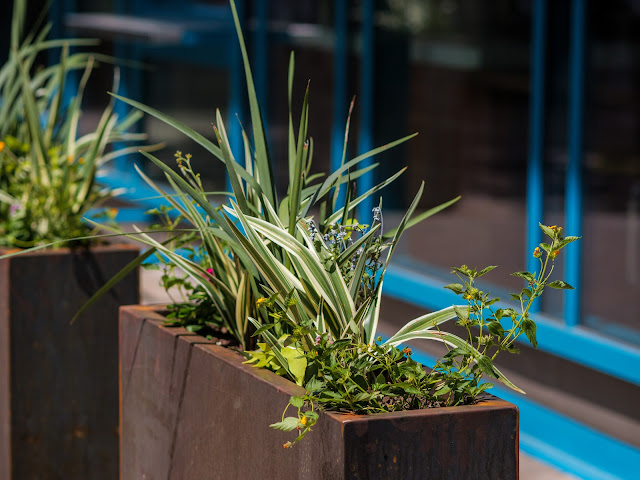 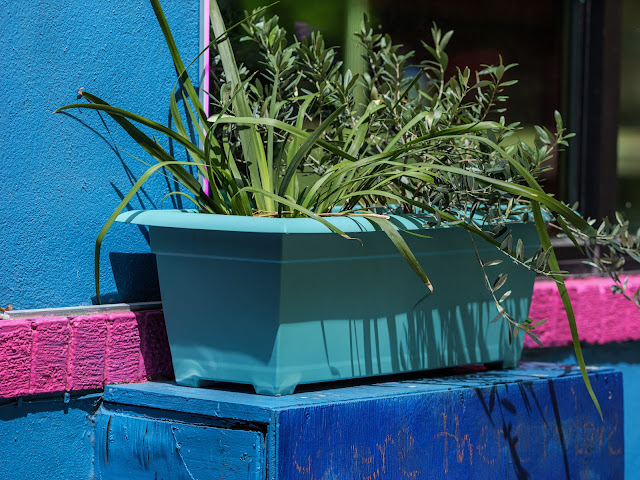 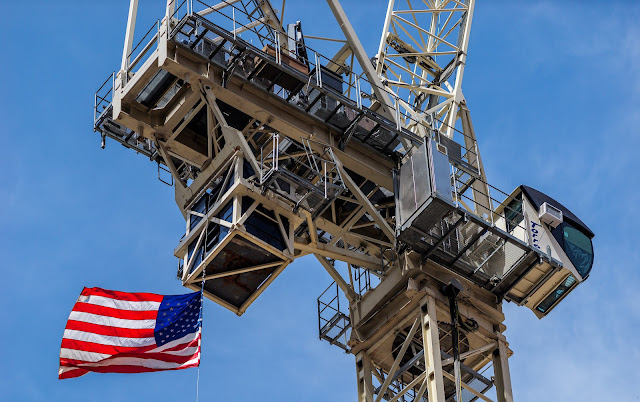 there is now one of these cranes on every block of downtown. I'm not sure they've
heard about the impending recession or maybe they think Austin will be immune.
It's never been immune before....And now we have the mercurial Elon Musk building new plants, getting tax abatements and then chopping jobs. Ah.. the new economy. 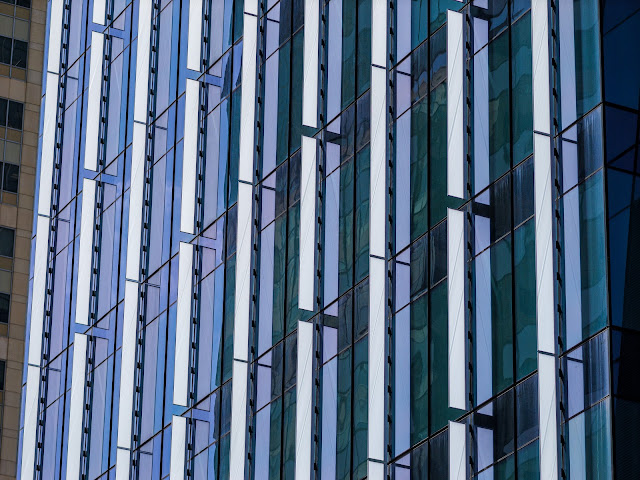 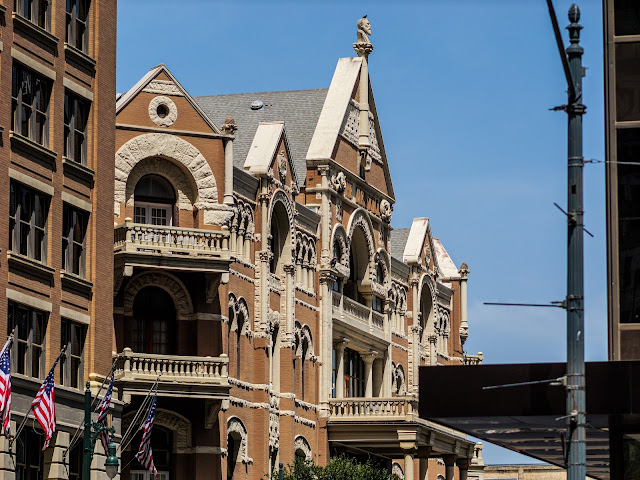 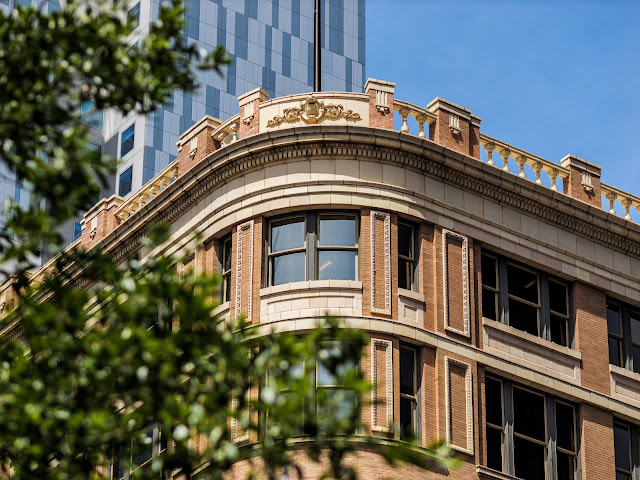 Loving the 4:3 aspect ratio for street photos. So nice not to have to pay too much attention to the far sides of a "too wide" frame. 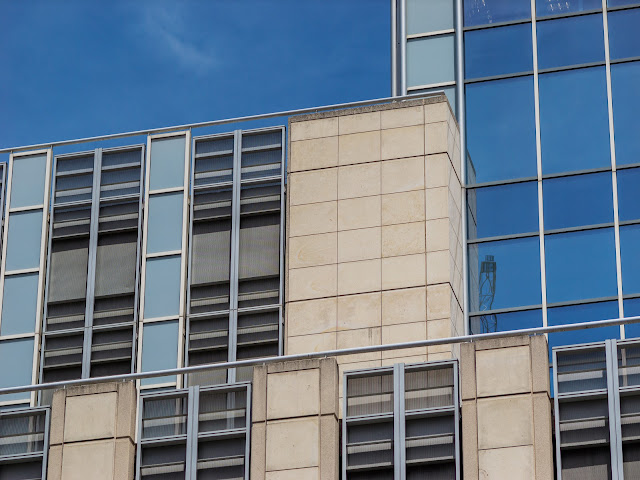 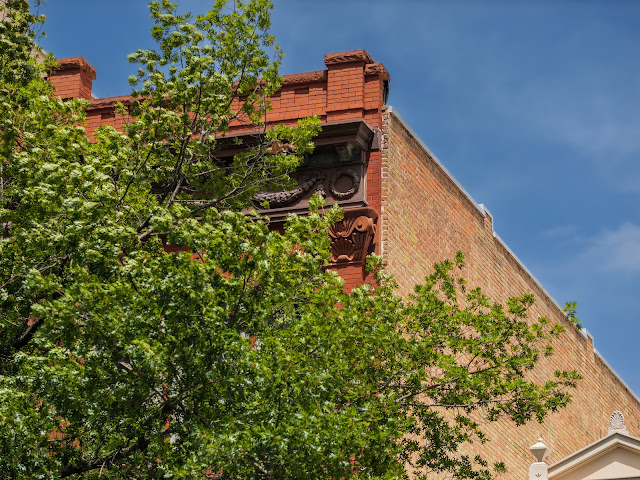 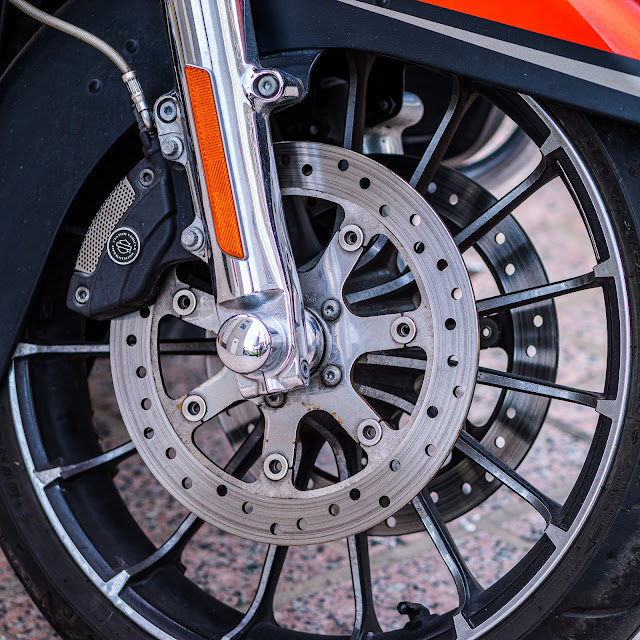 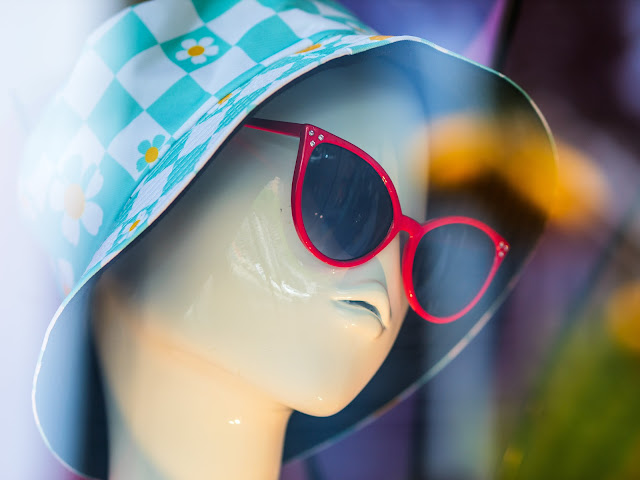 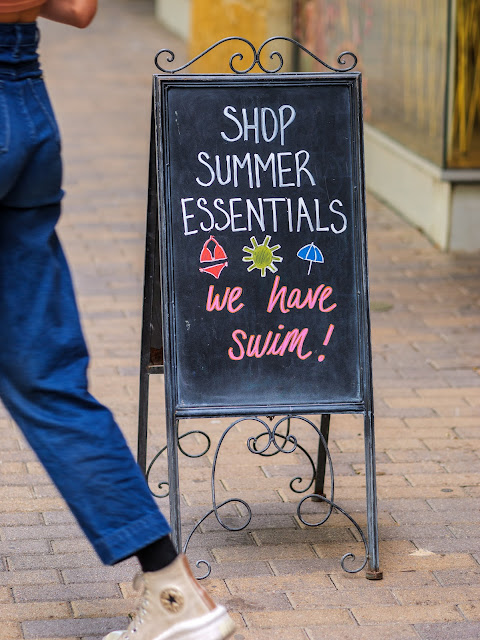 They advertised "Swim!" but there was no pool, no water, no coach.
Only a store full of women's clothes and shoes. And the shopkeepers looked at me strangely when I asked to purchase some "Swim!" 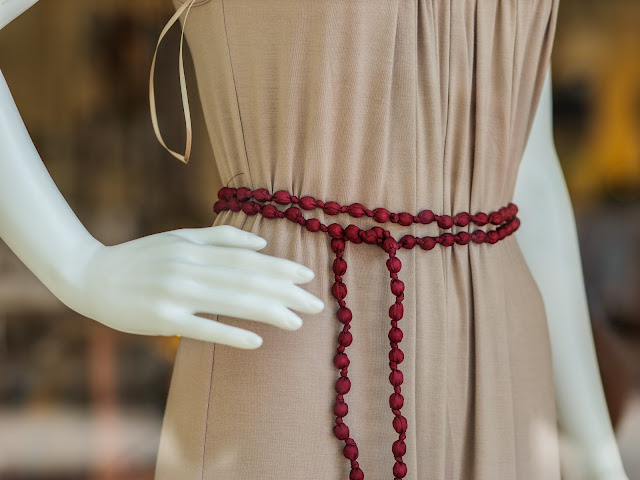 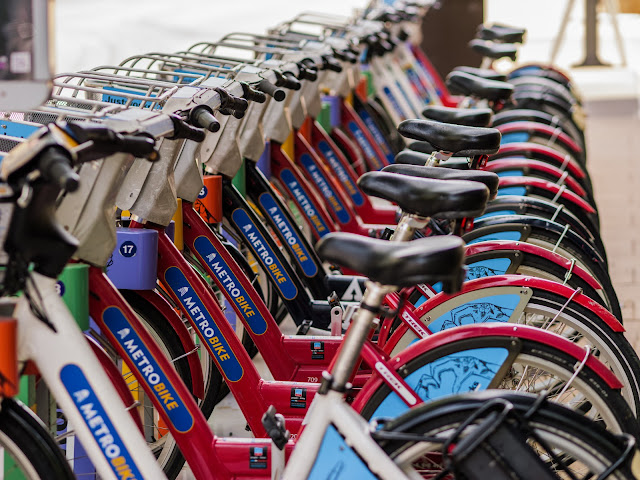 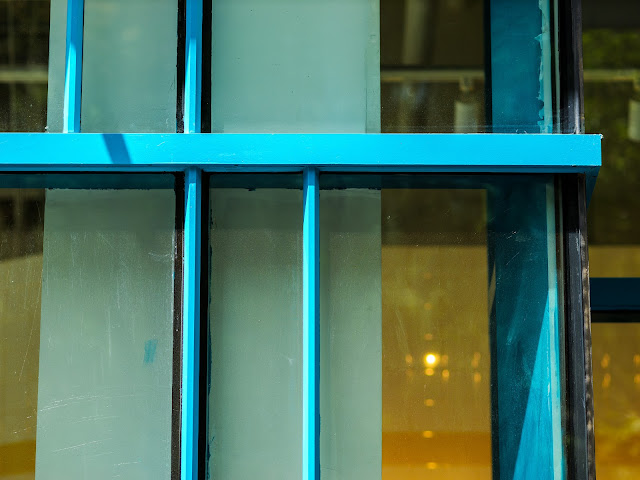 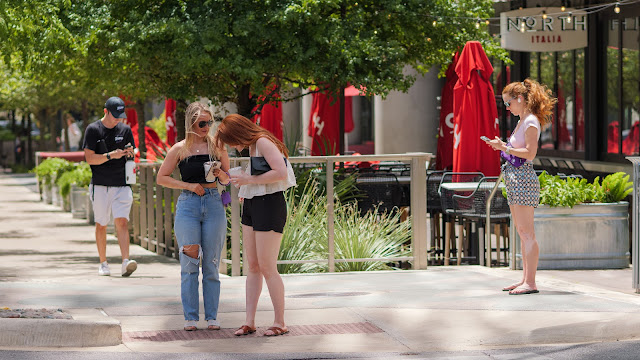 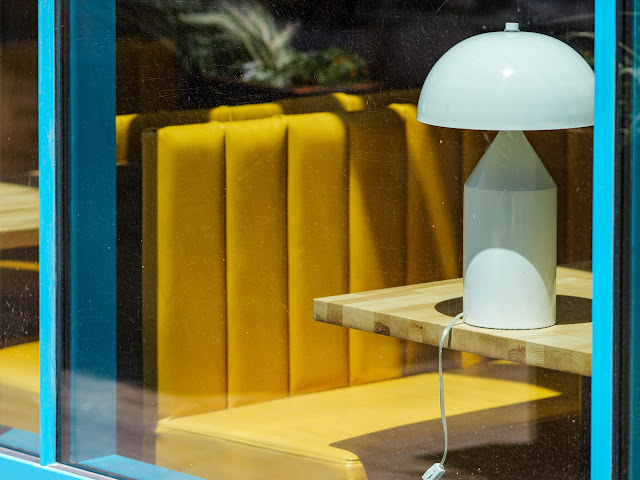 They added lamps to the tables since I was here on Sunday.
Not sure how I feel about that... 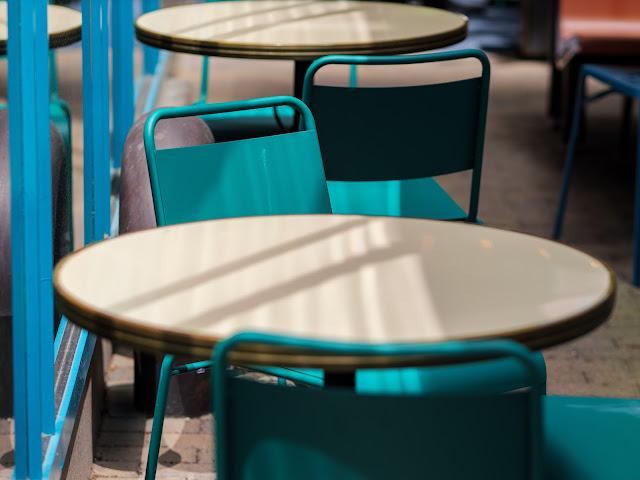 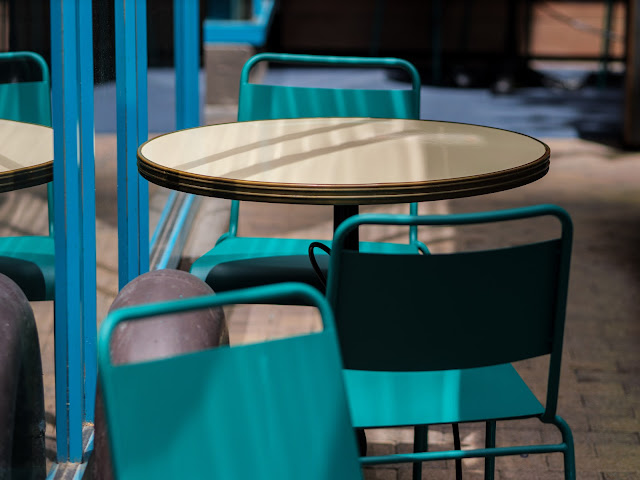 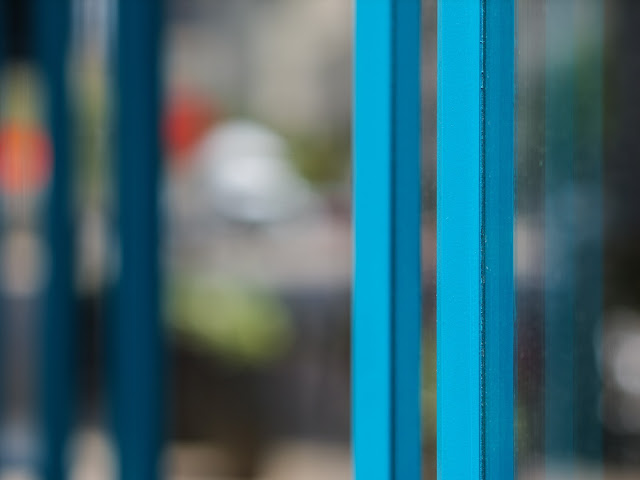 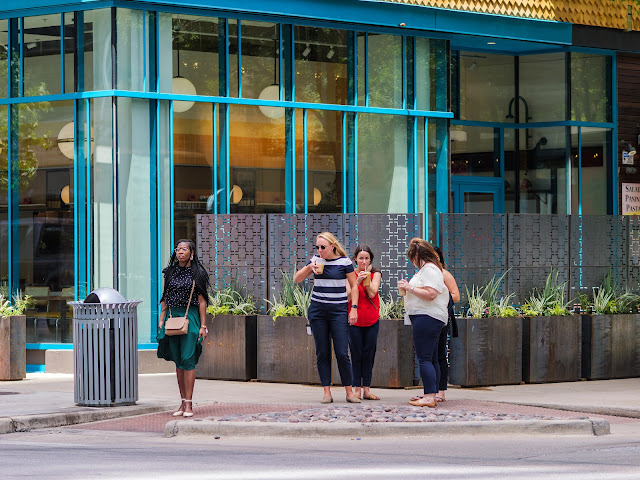 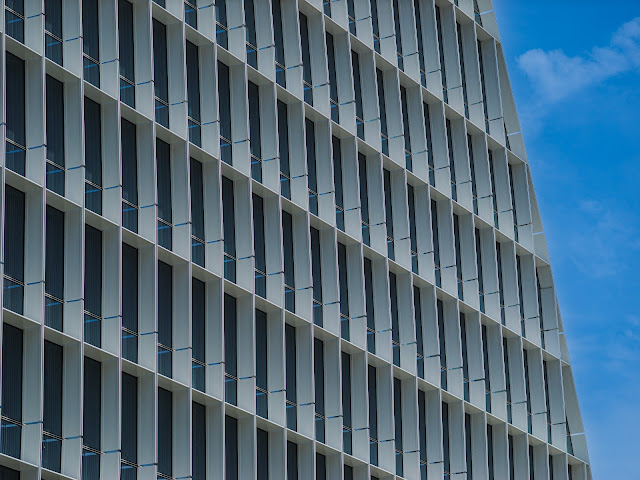 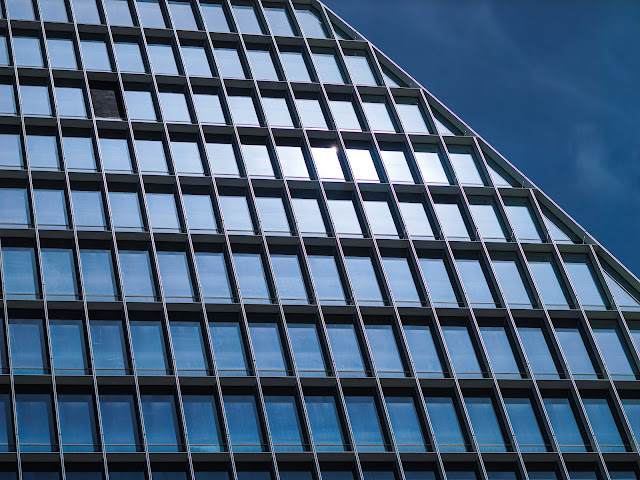 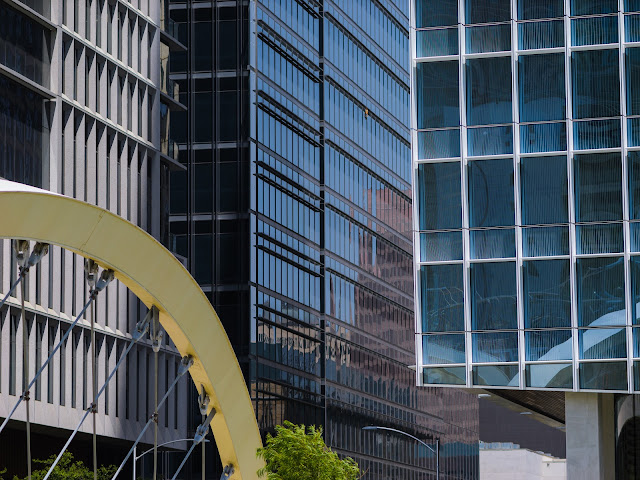 I had lunch at the Cookbook Cafe at the main library today. This is the view from the dining room.
I had a slice of ham, cheese and spinach quiche and an indulgent oatmeal chocolate chip cookie. Washed down with black coffee. Tossed down some water for the rest of the walk.
I read a great book about cheese over lunch. Fascinating. Who knew?
(Besides the French???).
By the way. I'll be keeping that 75mm lens too...
added later: P.S. I think the Fed will only raise rates by 50 basis points tomorrow. Not 75. Kirk's prediction.
Posted by Kirk, Photographer/Writer at 18:05 8 comments: