Zany Cheap Stuff I Love to Have in My Studio (or in the car, or in the rolling case, etc.) Part 1. 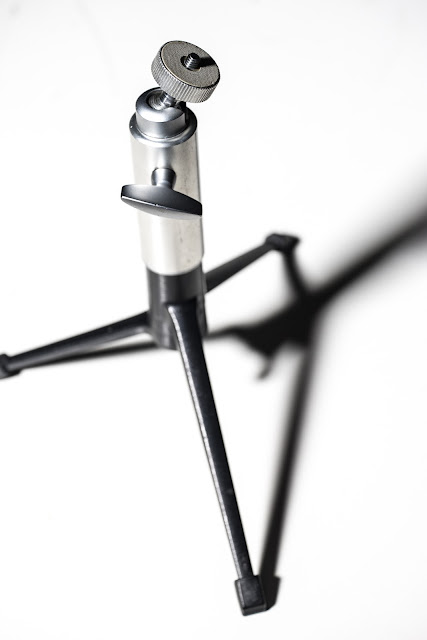 I am aware that there are lots and lots of table top tripods floating around in the photo-universe-inventory. I've played with a fair number of them. My favorite is the one up above. The head and the legs are two separate pieces. I don't think the basic design of the legs has changed in decades. I bought mine about 25 years ago and have found it to be indestructible and strangely friendly.

When you loosen the wing nut on the bottom of the legs they can all be pulled around together (like the legs of a C-Stand) so you can pack the tripod flat. The head on this particular unit is not the one I got with the legs in my initial purchase. This head predates my more modern ball head by ten or twenty years. There is only one major difference between the two heads.
My newest one used a plastic grip on the tensioning control. The one above is all metal.

I saw this particular head in the used case at a local retailer for $50. Seems pricey to some people since you can probably buy five or six complete Chinese table top models for the price of the single, used head. If you've used a Leitz ball head you'll understand why I would happily pay $50. The head cinches down tight and there's less movement in this old unit than in some of the $150 Manfrotto ball heads I've also purchased.

I use this when I need to get down at floor level to shoot stuff. I also use it sitting atop an upended apple box. I also use it on tables (ha!) and pressed sideways against door frames and walls. But mostly, I just use it. I've put small LED panels on one to use as low background lights and I'll take it along on my next video adventure so I can put an RX10 on it, aim it, turn it one and use it the footage as b-roll.

Some times I use one of the ball heads, along with a Super Clamp, to create a working tripod out of chair or half open file cabinet drawer. Yesterday I used the combination to clamp to a C-Stand. The C-Stand was holding a light and the camera was clamped about halfway down and gave me a second point of view.

The Leitz Table Top Tripod is a simple design, extremely well implemented and built to last for at least my lifetime.  You should own one. They are now called, "Leica Table Top Tripods." Same. You have to buy the Leica Ball Head separately. Oh dear God! I just looked and they are currently available for breathtaking $179.99. That would make the package of the two about $300. Never mind.

Posted by Kirk Tuck, Photographer/Writer at 18:00

I totally agree. The Leica Ballhead works so well and cinches down very securely, as you say better than a lot of expensive ball-heads. It will handle the weight of a normal DSLR without issue. I also use mine against walls or pillars, or as a "gun-stock". Fits in a typical small sidebar or even the "glove pocket" on my ski shell jacket.