Zany Cheap Stuff I Love to Have in My Studio (or in the car, or in the rolling case, etc.) Part 5. 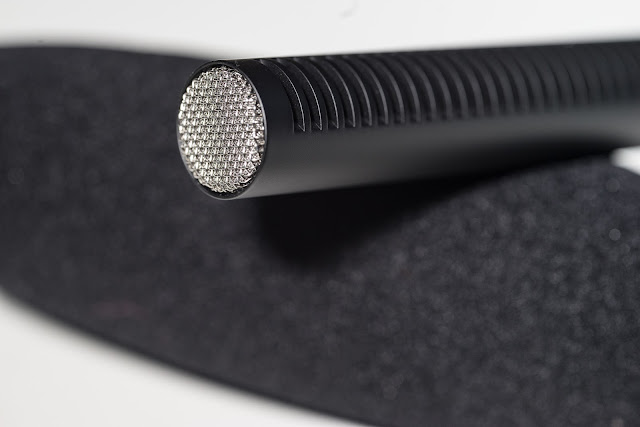 When I first jumped back into making videos I didn't think I'd get very serious about it so I didn't want to spend a lot of money on peripherals; like microphones and fancy tripods. I made the same mistake so many people do and instead of just buying one really adequate microphone I started down a path that began with less expensive units. My first new mic was the original Rode Videomic. It took a 9 volt battery, had pretty good, rubber band isolation and it really wasn't a stinky performer; especially if you used it as most are designed: within a couple feet of your actor or speaker. It was good but
not great.

I tried an Azden unit and it was noisy. Then I hit on the Rode NTG-2, along with the Beachtek DXA 2T interface, and I thought I'd found my sweet spot. For about $250 it made voices sound great; good bass and lots of detail. I liked it but I found that it too was a bit noisy when recording softer passages. One day I played with a friend's Sennheiser MKE 416 (the go-to microphone for a lot of pros...) and I was struck by how low the noise could be and how amazingly transparent the sound could be. But then I looked at the price tag and I looked at my check book. I'd just paid for someone's college tuition and the remaining balance seemed a bit......spare. Too spare to splash out for a $1300 microphone...

I grumbled and went back to using my Rode NTG-2. The same friend who tried to addict me to higher quality microphones mentioned to me, over coffee, that Sennheiser also made a microphone that was similar to the 416 but at about one quarter of the price. I decided to try one; if I didn't like it I could always send it back...

It was the Sennheiser MKE 600 and it's been in the studio for months now. It's my all terrain, all purpose microphone and, while I'm sure the anointed ones can hear vast differences between it and its costlier brother, I can't always hear the differences. It may be my lack of sophistication but it may be another case of having to pay four times as much to get 5-10% improvement, after a certain point.

In addition to the low noise and sound quality of the MKE 600 there are a few other things I like about it. I can use it with phantom power in conjunction with my Zoom H5 or Tascam D60ii, or I can use it with an internal, double "A" battery. I like that it has an on-off switch with a pilot light that glows for a few seconds to let you know the battery is still alive. It also has a high pass filter to cut out low frequency rumble for those times when there is low frequency rumble afoot.

I've also picked up (used, and at a very attractive price) the Audio Technica AT 835B microphone which is in the same class as the other two $300 mics. It's got a slightly different sound than the Sennheiser. If I had to make a description of the two I would say that the Sennheiser is warmer and makes voices sound better while the AT is more clinical and perhaps more accurate (not that this is always a plus). I usually end up taking all three mics along with me because I live in fear of equipment failure; but also I like to have choices for different locations. Rooms all sound different and microphones seem to handle everything differently. Not wildly differently, but different enough.

I'll stay with the MKE 600 until I have a job that demands a better microphone, or until someone graduates from college and frees up some of the cash flow. Then, instead of buying the Porsche I always tease my family about I'll get my hands on a 416......or better.

Sadly, the nerdism surrounding microphones isn't something one can proudly display while out on a walk. The don't make neckstraps yet for microphones so you can't wear them to the next photo walk and impress your friends in I.T.  Ah well.

Having good microphones is a wonderful thing. People will put up with bad video as long as you have a good story and great sound, but you could have produced the greatest visual effects in the world and no one will stay to watch your program if your audio sucks. Sad but true.

Posted by Kirk Tuck, Photographer/Writer at 19:45

Currently debating on this vs the AT4053B, slightly favoring the AT4053B since I think I'll be shooting indoors more than outdoors. I get the other when I free up funds later.

For me, the MKE600 was the only one in its class that gave audio a "professional" sound; when I first heard it through headphones I was startled because it sounded like I was picking up someone else's audio feed.

On your hunt for better sound as you shoot mainly internals I'd maybe recommend trying a hypercardiod rather than a shotgun mic. The Audix SX1-HC comes highly recommended for the money! The reason why most film pros recommend a hypercardiod over a shotgun for internal use is that the interference tube that shotgun mics use to be direct actually takes in the audio that comes from the sides and then flips it out of phase to null ambient noise. Outside that's great but in smaller rooms the sound reflections from the walls enter the tube at different times and that can add a slight phasey quality to any room sound that gets picked up.

Different shotguns are more forgiving of this than others (the Rode NTG3 which is very like a more modern 416 to my ears is pretty good in this respect) so I'm not suggesting that there is a problem... just you know... adding some info to the pile!