Zany Cheap Stuff I Love to Have in My Studio (or in the car, or in the rolling case, etc.) Part 3. 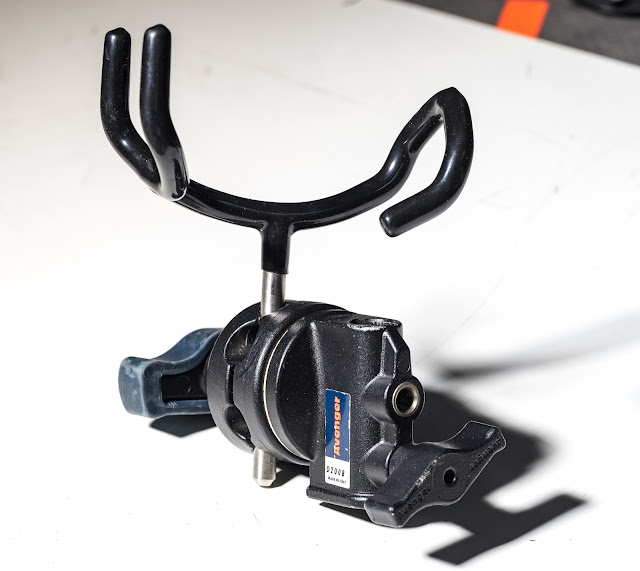 This falls into one of those "What the Hell is This?!" categories.
It's a Boom Pole Holder. So, what the hell is that?
(The part closest to the camera is an Avenger grip head).

Well, when you decide you are going to tumble down the rabbit hole and find out all about video, at some point you decide that for some stuff you like the way shotgun (super cardioid condenser) microphones sound better than the sound you get from your $600 set of Sennheiser wireless lavaliere microphones. You buy a good shotgun mic and determine that it needs to be about 18 inches from your subject's mouth. You research boom poles. These are poles with a microphone on one end and a sound recording crew member holding onto the other end. The goal is to aim the microphone at the talent's mouth while
it dangles at the end of the pole, just out of sight from the camera.

But at some point you realize you really want to mic an interview with your lovely shotgun microphone but you ditched the crew because your client blew up the budget. The sound guy was collateral damage. Now you are kicking yourself --- or you would be if you didn't have one of these strange contraptions (above) in your gear repository.

You hook the grip head to a light stand (make sure it's a heavy enough light stand so it doesn't fall over on your talent...) and you hook the Boom Pole Holder to the grip head. The pole sides in the holder and it should be front weighted enough so the rung on the right holds the pole because it's behind the fulcrum on the left. Voila! Now you can position the microphone where you need it, get it up just high enough to be out of frame, and add the responsibility of monitoring the audio as well as shooting and directing to your list.

Think of the boom pole holder as a steady, extra hand. About $20. The cost of a good sound guy? $650 a day? The benefits of having a good sound guy? Priceless. There's one in our microphone case. No, not a sound guy. One of the holders.

Posted by Kirk Tuck, Photographer/Writer at 18:26

This is something I'm going to need at some point this year and wasn't aware of ; Thanks !

Seconding that this is an awesome piece of kit. Makes it very easy to make minor mic position adjustments as well once set up... Totally recommended!